From television to stage to albums to the big screen no one does comedy like the gents at Monty Python! With their final theatrical outing, Monty Python's The Meaning of Life - six of the funniest and most talented men ever return to their sketch comedy roots delivering one hilarious loosely interconnected story after the other as they explore what living on this little ball of dust is all about. Universal gives the boys the big 4K Ultra HD Blu-ray upgrade with an excellent 4K HDR10 transfer, an interesting and will no doubt be a controversial DTS:X audio mix for some and a smattering of worthwhile recycled bonus features. While not their best film it’s still painfully hilarious. Recommended

“Shut up, you American. You Americans, all you do is talk, and talk, and say "let me tell you something" and "I just wanna say." Well, you're dead now, so shut up.”

No one quite does insightful irreverent comedy quite like the boys of Monty Python! Starring Graham Chapman, John Cleese, Terry Gilliam, Eric Idle, Terry Jones, and Michael Palin, they were the brilliant comedic minds of their generation. From analyzing the cultural rift between the dirty working-class playwrights and posh miners with their tungsten carbide drills to tinny-sounding words to the relevancy of religion in everyday life, no topic was too taboo for the boys. After a successful run on television, they turned their sights to the big screen. Between Holy Grail and Life of Brian, Monty Python had a nice second life in theaters. With their final theatrical film, Monty Python’s The Meaning of Life the gents returned to sketch form interconnecting a series of bits, bobs, and songs loosely tied together by a semi-connected-but-not-really-sort-of theme.

If you only know the chaps from films like Holy Grail or Life of Brian you may be a bit thrown by Monty Python’s The Meaning of Life. This isn’t like their other films with a narrative throughline or main character to follow. The Meaning of Life is much more in keeping with their time on Flying Circus with bizarre silly sketch comedy segments and animations. The bits that make up the whole of this hilarious venture are scarcely related and can differ greatly from one piece to the next, but they’re amazingly funny! If you’re not laughing through the opening segment “The Crimson Permanent Assurance” - I dare say there’s no hope for you and you're better suited for the Queen's own McKamikaze Regiment. However, if you pass out from the pain of extended laughter and lack of oxygen and wake up in time to enjoy the rest of the film, you’ll explore explorations of proper birthing protocols, how Protestants are different from Catholics, and why you may want to avoid that final after dinner mint. The film doesn’t have a plot or a story throughline, but then these guys never needed one! 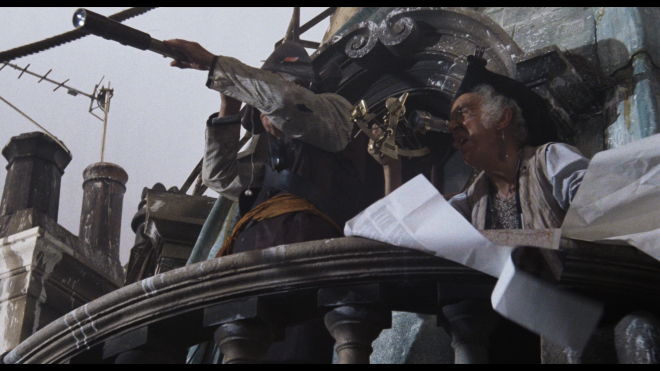 Like so many others out there I got my start with Monty Python and the Holy Grail and quickly segued into Life of Brian. I knew what Monty Python’s Flying Circus was but I never really saw much of it. Partly because where I lived it wasn’t on television, but my rental shop didn’t have any tapes. It wasn’t until I met my wife who was a huge fan of the show that I actually sat down and started watching it. But in quick order, I devoured every episode. It’s one of the rare comedy shows where each episode has at least one genuinely gut-bustlingly funny sketch. Not every single sketch works, but when they hit they’re incredible. 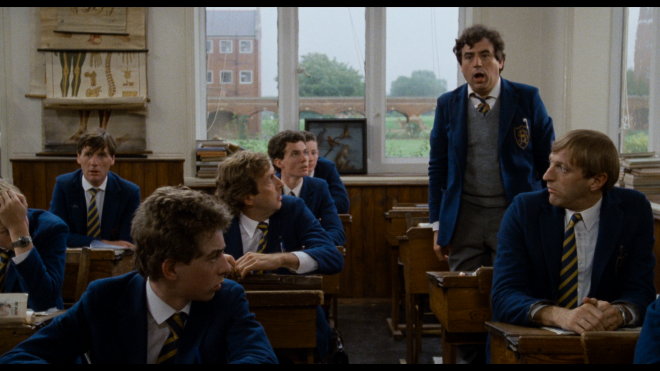 This is the case with Monty Python’s The Meaning of Life. There are a couple of segments that just don’t pop. Then you have the Mr. Creosote gag which I think is amazingly funny but I still can’t watch it while eating. And then you have the song and dance number “Every Sperm is Sacred” - which all pun intended may blow this film’s load too early and should have been saved as the climactic gag. Small stumbles aside, this film is still a grand time out. It’s too bad they couldn’t have made more, but Chapman’s untimely death put a damper on things. The surviving members of the group would all work together in other projects like A Fish Called Wanda or Erilk The Viking serving as pseudo cast reunions, but this hilarious grand finale is the last time all of them would share the screen together closing out an incredible era of redefining comedy. 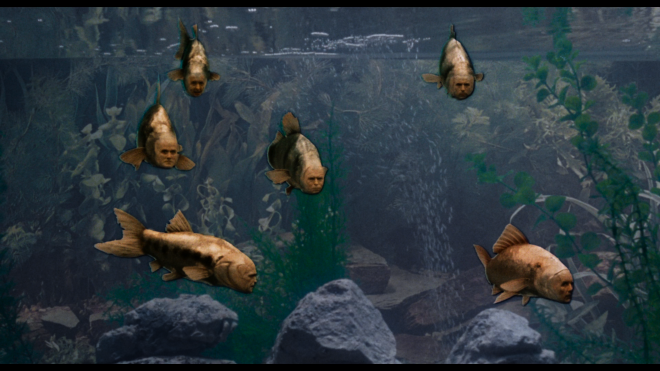 Vital Disc Stats: The 4K Ultra HD Blu-ray
Monty Python’s The Meaning of Life flashes its naughty bits at 4K Ultra HD Blu-ray in a new two-disc set. The 4K version occupies a BD-100 disc with a BD-50 standing tall for 1080p. The discs are housed in a standard black two-disc case with identical slipcover artwork. The disc loads to a static image main menu with standard navigation options along the bottom with the bonus features panel along the right side of the screen. 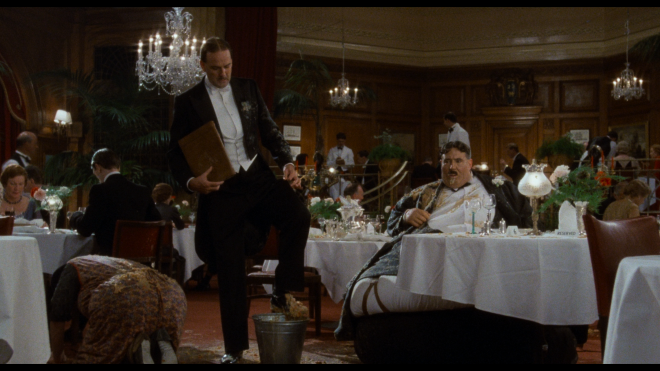 In Universal’s days of early Blu-ray releases, Monty Python’s The Meaning of Life was one of the relative few that didn’t get slapped with horrible compression and edge-enhancement ugliness. It was always a pretty good-looking movie with only a few small issues holding it back. Thankfully this new native 4K HDR10 transfer offers fans of this zany irreverent comedy classic a truly fantastic image transfer to celebrate. From the bizarre but incredibly hilarious opening segment “The Crimson Permanent Assurance” to the final song and dance number there are a number of great enhancements for this transfer to enjoy.

First - details are immaculate throughout most of the film. This was an intricately constructed film with wild and crazy sets, costumes, and makeup effects and they’re all on display here. You can not fully appreciate everything coming out of Mr. Creosote in all its oozy mucky glory! Likewise other sequences like when the woman gives birth or the live organ transplants or the first Zulu war all look amazing. Film grain is intact and while it can appear somewhat noisy in places, it’s perfectly cinematic and natural to this particular film. However, soft spots like “The Middle of the Film” or any optical effects like the footage just before Creosote explodes can appear a bit rough around the edges with impacted details, harsher black levels, and a coarser grain presence. HDR10 has been judiciously applied highlighting natural colors, bold crisp whites, and nice inky blacks without going overboard. If a scene like Grham Chapman explaining to his wife Eric Idle how he can go get a “Con-dum” any time he wants remains appropriately drab. One of the funniest examples of excellent Red, Yellow, and Blue primary pop is Arthur Jarrett’s chosen form of execution! Black levels all in all are in great form with impressive shadow gradience but again, problem spots that looked dodgy before still look a bit thick but overall not as troublesome as before. All in all, I’m quite happy with this transfer. Where the previous Blu-ray was pretty good, it still had plenty of room for improvement and Universal delivers a new transfer that easily outpaces past disc releases. 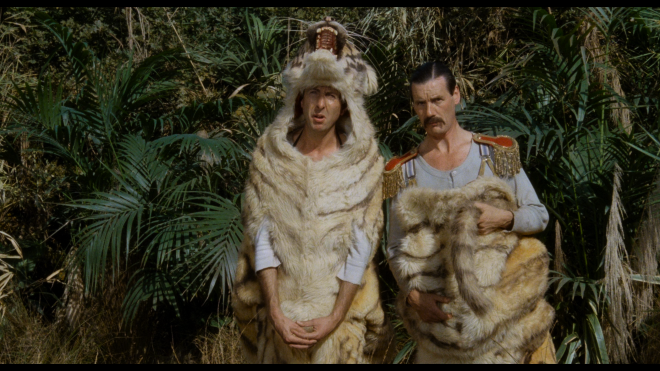 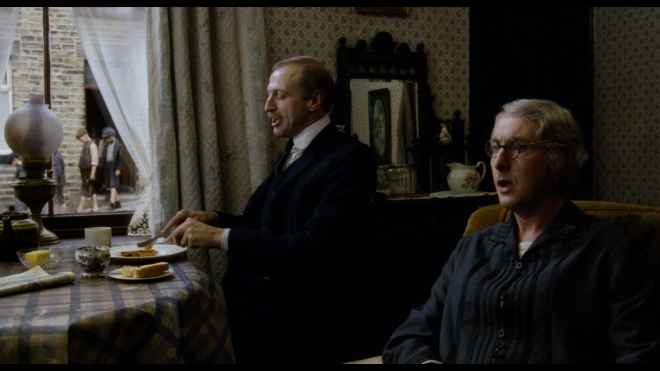 In a pretty wild and unexpected move, Universal gives Monty Python’s The Meaning of Life a DTS:X mix that offers a more pleasing overall sonic experience over the previous anemic DTS-HD MA 5.1 mix of the 2013 disc, but there's a "but." The "but" in question here is that this really isn't a fully matrixed pin-point specific track as you'd expect from a high-octane action flick or any track branded "DTS:X" for that matter. Instead, this mix sounds like the front/center channels played throughout all of the channels. As I said at the outset, this is a stronger track overall because all of the channels are working whereas the old 5.1 mix was pretty much a static front/center affair without much of any side or rear presence and sounded rather flat. So while there may be a little more "life" to the mix, it's not something to be completely excited about since there's relatively little channel movement or dynamic imaging. Interestingly, narration bits that open each segment keep to the fronts and into the height channels without that same bleed into all of the channels like the rest of the mix - so there is purpose and method to this track. I'm marking it as better simply because I feel it is better than what we had before, (here's that but again) but it's not quite what you may expect to get out of a typical DTS:X mix. 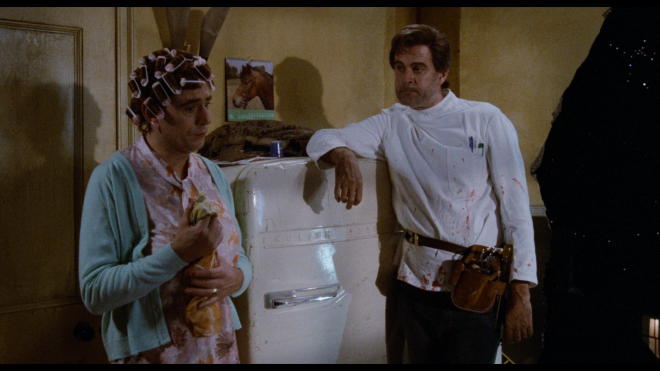 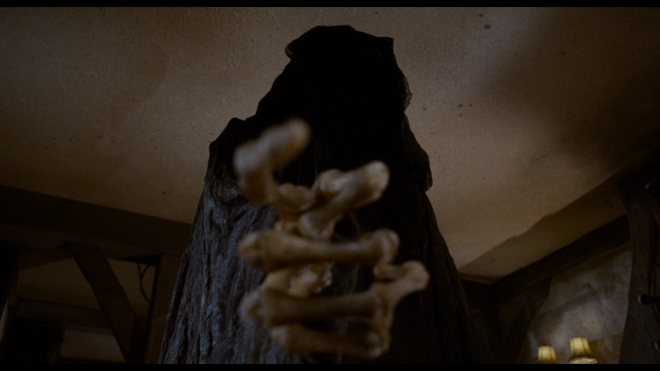 For a more thorough breakdown of the bonus features, check out our original 2013 Blu-ray review 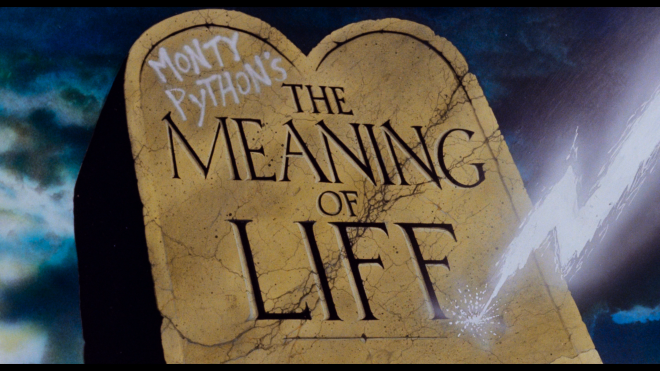 For their final bow with all original cast members, Monty Python’s The Meaning of Life is a hilariously grand film. Packed with irreverent sketches, the film is a laugh-a-minute examination of the absurdities faced in day-to-day life. As the film nears its 40th Anniversary, it’s amazing to see that some of the more pointedly political and religious jabs still land and have hardly aged. You’ll laugh, you’ll cry, you may even vomit! You may even die. But that's okay because if you pass whilst watching this movie and that means you went out happy.

Monty Python’s The Meaning of Life ascends to a higher form of being with a new 4K Ultra HD Blu-ray. This native 4K transfer with HDR10 is a clear and obvious upgrade over past Blu-ray and DVD releases complete with an interestingly effective DTS:X audio mix. While no new bonus features were included, it’s nice to see Universal excavate the corpses of past releases and haul up all of those existing aged bonus bits and slap them onto this new 4K disc. If you’re a Python fan and loved this movie and have no future in chartered accountancy, it’s an easy upgrade. Recommended.