John Carpenter’s spooky ghost story The Fog finally creeps its way onto 4K Ultra HD Blu-ray stateside. His follow-up to the smash hit Halloween may not be as highly regarded by many, but the film is a ghoulishly creepy classic that’s perfect for the fall season. Scream Factory gives fans an excellent new two-disc Collector's Edition set to work with offering up an impressive Dolby Vision transfer with Atmos and restored Mono audio on top of hours of informative bonus features! Highly Recommended.

“At the bottom of the sea, lay the Elizabeth Dane and her crew…”

On the 100th anniversary of Antonio Bay, a long-forgotten curse will terrorize the seaside community. As Father Malone (Hal Holbrook) discovers the town’s dark secrets hidden within the walls of his church, Nick Castle (Tom Atkins) and his newly picked-up friend Elizabeth (Jamie Lee Curtis) try to figure out what happened to Nick’s friend and crew while at sea. At the same time, local late-night radio DJ Stevie Wayne (Adrienne Barbeau) searches for her own answers to bizarre happenings. All of these bizarre occurrences have something to do with a terrible tragedy that happened a century before and a deadly curse that will haunt the people when the Fog rolls in.

It may not be John Carpenter’s best film, and it may not even be a necessarily great horror film, but I love The Fog. After the amazing success of Halloween, any follow-up to that massively successful film was inevitably going to draw more scrutiny and a sharper critical eye. Certainly by no means was it a failure at the box office, $21million against $1 ain’t too shabby. But after Halloween’s $47million against just $300,000 haul - that’s a notable difference in receipts. But these are two very different movies. 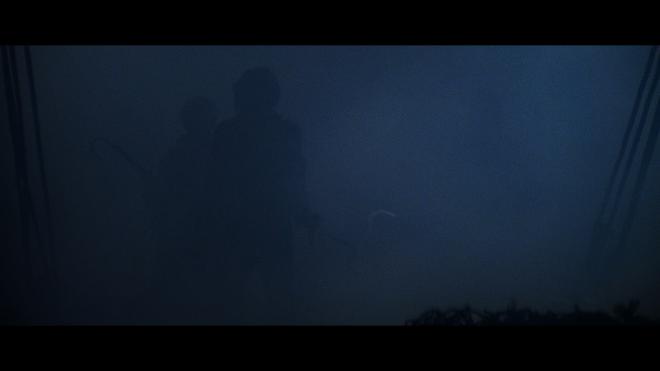 Where Halloween ignited the slasher trend that would carry on through the 1980s, The Fog is just an old tyme ghost story. On a different scale, this plays closer to something like The Haunting, or The Uninvited instead of something similar to Psycho or Peeping Tom. It’s a different beast. Where Halloween hits hard and fast with little downtime, The Fog is content to take its time and save its biggest and best scares for the ghoulishly grand finale. In slow order, we get to know all of the people in the film one by one giving us a reason to root for them when that creepy glowing fog comes rolling in against the wind. 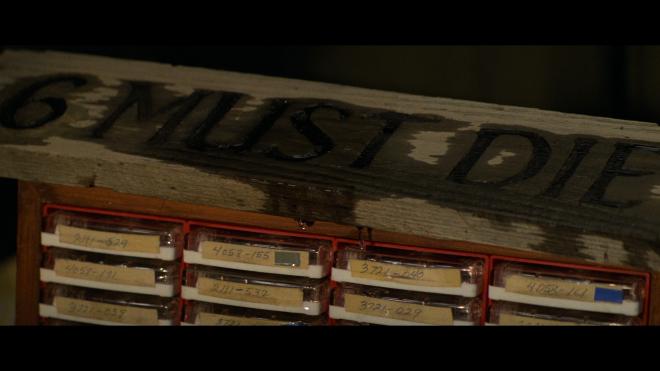 I’m also not someone that’s quick to call this a flawless film. Of Carpenter’s early works before he got bigger studio projects like The Thing, I feel like this is the one where you can see him experimenting with and trying to figure out what he was doing with the material. Carpenter said his first version of the film was so terrible he scrapped it and reshot nearly a third of the film to tighten the pace, add some more gore and intensity, and add a few scenes to help make the film comprehensible. Apparently one of the added scenes was the film’s prologue with John Houseman as a scurvy old seadog telling a group of kids a creepy simple ghost story over a campfire - but it’s the entire setup of the film. It’s just a few seconds of runtime but it lays all of the groundwork needed to put that chill in your bones as Houseman’s gravely voice tells the tale. I’ve always been curious to see what the original cut of the film would look like but I can’t imagine it not having that opening scene. 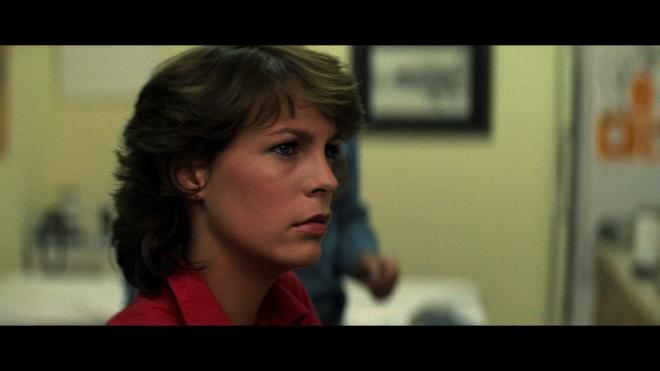 The Fog was one of the few movies that actually scared me as a little kid and I’m still creeped out by it today. It probably only ran once a year, but felt like this was on all the time on Detroit TV 20’s Thriller Double Feature. More than the frequent appearances of Freddy Kreuger, Michael Myers, or Jason Voorhees, The Fog scared me. I’ve never seen a serial killer in my life, but I’ve seen fog. There’s something about that swirling mist obscuring your vision that heightens your reaction to strange sounds as you try to focus on the smallest little shadowy detail that this movie perfectly captures. You’re so focused on trying to see the figures in the mist that you miss the ones standing right behind the hapless crew of the Seagrass. In my book, that sort of visual misdirection is some great horror moviemaking.

Vital Disc Stats: The 4K Ultra HD Blu-ray
As if guided by a campfire sent from hell itself, The Fog rolls onto 4K Ultra HD Blu-ray to haunt a new two-disc Collector’s Edition set from Scream Factory. The set features of a BD-100 and a Region A BD-50 disc. The discs are housed in a standard black two-disc case with identical slipcover artwork. Each disc loads to an animated main menu with traditional navigation options. 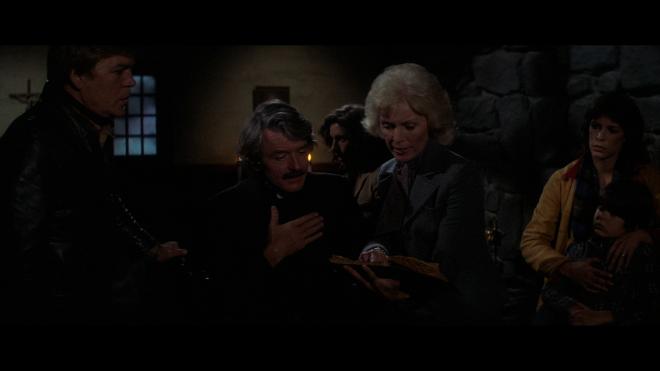 The Fog rolles onto this new 4K Ultra HD Blu-ray with an excellent native 4K 2.35:1 2160p Dolby Vision transfer. Largely this transfer is identical to the Studio Canal discs that came out in Europe in 2018. Same source. However, this is a slightly different encoding giving the film a larger bitrate to play with handily outpacing the older discs. Much of the time you’re not going to see a whole lot of difference but comparing the discs I felt like fine grain was a little better resolved here maintaining a natural cinematic feel - especially for some of the key optical shots where grain can appear much heavier. The fade-in shot of the little boy on the beach before he finds the coin is an example there. Details are generally terrific throughout - there are some occasional soft focus shots, but going back to the old Blu-rays and DVDs those shots have always looked that way. Facial features, clothing, and production design are well rendered. 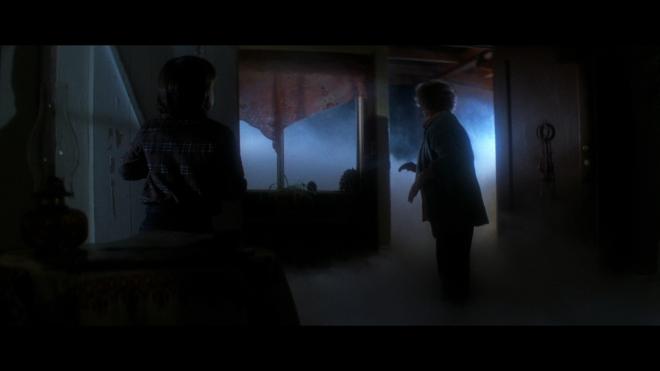 The Dolby Vision HDR grade is nicely applied allowing colors to pick up a little extra lifelike vibrancy while offering a welcome improvement to black levels, shadows, and bright contrasting whites. This is especially important for the film’s final act which is virtually completely dark with thick shadows and few light sources. Those blacks are deep and inky without throwing into crush and when the glowing fog rolls in you get some excellent shadow details and highlights as well. When Hal Holbrook pops out of the shadow at Janet Janet Leigh, that optical effect is still clear as day since they never could get the lighting right to do it on set so don't be too surprised by that. Primaries show appropriate pop without being over-saturated or pushing flesh tones into weird areas. Whites are nice and crisp without blooming allowing for some nice spectral highlights as well. All around this is a very good transfer that easily outpaces previous Blu-ray and DVD releases. Now if you’ve already picked up the 2018 4K Disc, this isn’t the area to look for the most drastic and immediate improvements. 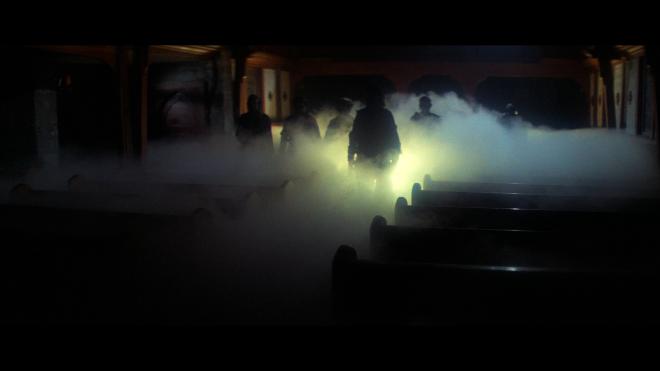 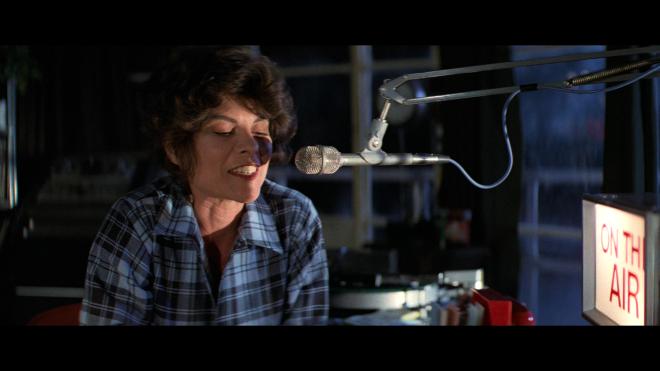 Scream Factory loads up this new release of The Fog with multiple audio options to choose from. You pick up a new Dolby Atmos audio mix, the previous DTS-HD MA 5.1 and DTS-HD MA 2.0 Stereo Tracks, and a new restored original DTS-HD 2.0 Mono track. All are great options but if I had to choose between them I’d roll either the new Atmos mix or the mono track. The new Atmos track is nice and moody allowing the mix to revel in the silence while giving incidental effects and ambients a little more spacing. Much of the time the track feels pretty front/center loaded but when the town goes nuts and the cars start honking or the bottles in the store start rattling the effects move around the channels nicely occupying the front, side, rears, and overhead channels. Gusts of wind are the main ambient sound effects that move throughout the channels leaving the fronts to focus on the dialog. Big open vista sequences like when Nick and Liz are riding out to the boat or coming back to shore, the ocean effects really fill things out nicely. Likewise, when everything goes to hell for the big climax the Atmos uses all of the channels perfectly. 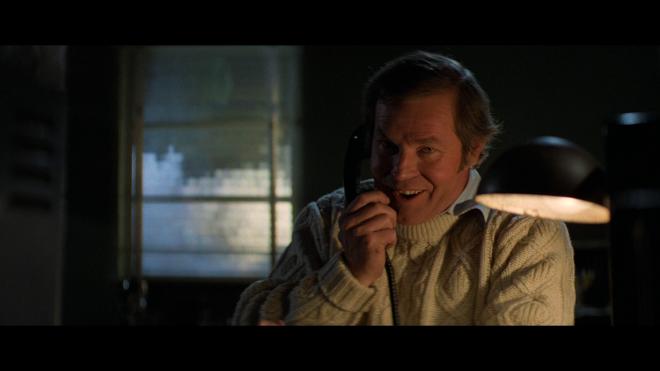 On the flip side, I like me a good old mono track. The film has this nice and tightly claustrophobic feel to it so I like it when the audio replicates that feeling. It keeps all of the elements close and intimate. With that, you can’t really go wrong with any of the tracks here, and depending on how you’ve decked out your home theater you have options to work with. Dialog, ambient effects, and Carpenter's creepy moody score all come through without issue. If you can go Atmos, that’s certainly going to be your most immersive option. The 5.1 track still works well enough for your average setup and the Stereo track is also pretty good for what it brings to the table. 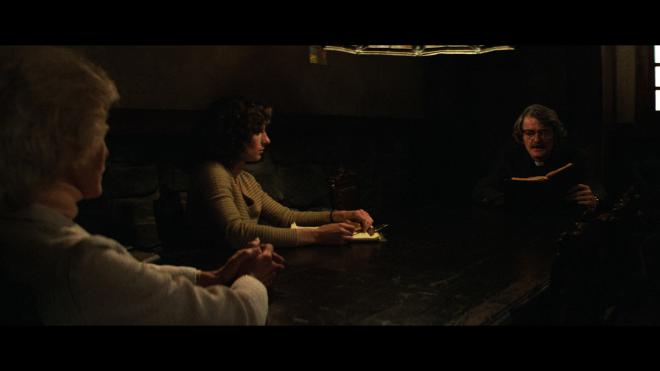 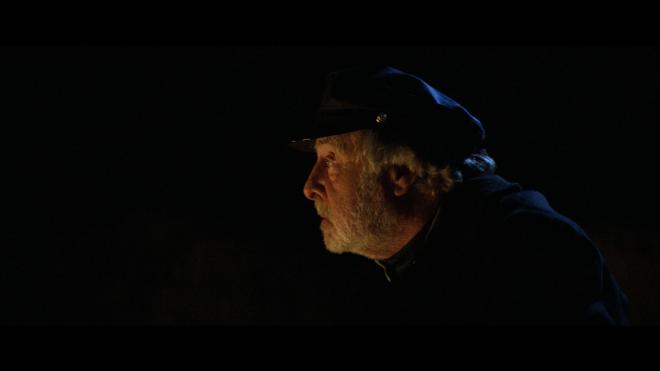 Well, the good news about the bonus features is you’re getting all of the previously available materials spread over this two-disc set. The bad news is there’s nothing new in the stew. You’re getting the same great audio commentaries, documentaries, and behind-the-scenes materials, and the awesome Jamie Lee Curtis and Dean Cundey interviews. If you’ve never seen them, they’re new to you and well worth digging into. 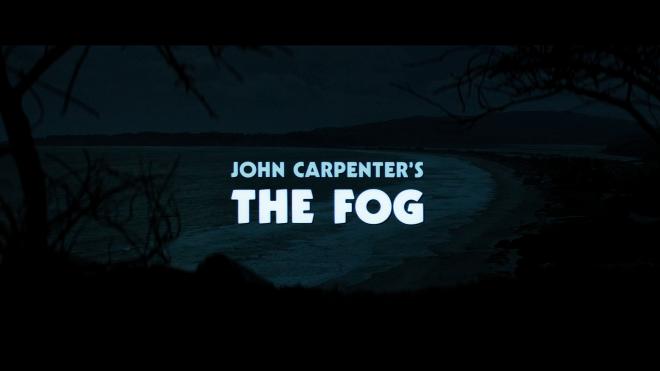 The Fog may not be the movie John Carpenter is best known for, but I feel it's one of his best. Sure, he made better movies before and certainly made better movies after, but The Fog is a welcome old-fashioned ghost story. It plays with what you’re seeing and hearing and the slow pace and Carpenter's droning pulsing score get under your skin.

Scream Factory delivers fans of The Fog a new two-disc 4K Ultra HD Blu-ray Collector’s Edition to celebrate in time for the creepy season. Using the same transfer from Studio Canal’s European releases in 2018, Scream Factory gives fans an excellent new Atmos audio mix and a newly restored mono mix to sweeten the deal. All of the previously available bonus features have been ported over from past releases. Folks who already imported this on 4K may be pondering the value of grabbing another copy just for an Atmos track… well, I’m really not the person to ask that question. I have two copies of this movie on Laserdisc.
Highly Recommended