Average working-class animated family the Belchers - Bob, Linda, Tina, Gene, and Louise make their big screen debut in the charming and hilarious The Bob’s Burgers Movie. The film looks and sounds big in the mold of a classic Hollywood animated musical but still retains the charm and heart of the fan-favorite show. Now on 4K Ultra HD Blu-ray exclusively at Best Buy in a deluxe SteelBook package, the film looks fantastic with added resolution and HDR10, the same excellent audio mix, and a stacked collection of informative bonus features. If you’re a 4K collector, keep an eye out for The Bob’s Burgers Movie - Highly Recommended

In the time since I reviewed The Bob's Burgers Movie on Blu-ray, I've effectively watched through this movie five times between two different formats, the entertaining audio commentary, and a need to enjoy those catchy songs again. Because the film just keeps getting better and better each time I watch it, I'm bumping up my original score half a star. I just can't get enough of this delightful and hilarious movie. 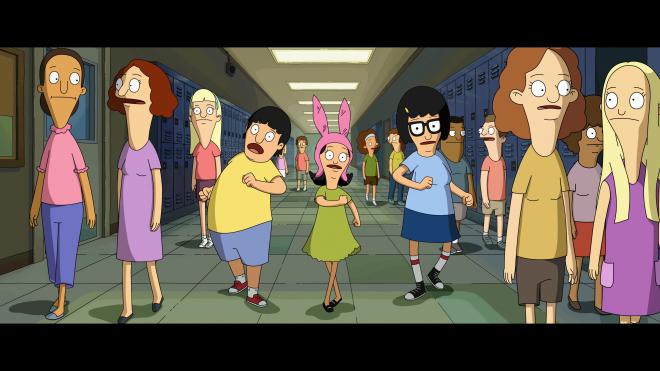 Here's an excerpt from my Blu-ray review:

"The Bob’s Burgers Movie looks and feels bigger than the show but it never loses its small-screen heart and soul. The animation is crisper and cleaner with some 3-D enhancements to the 2-D aesthetic, but it’s still Bob’s Burgers. It’s taken on the shape and form of a classic Hollywood musical complete with impressive catchy songs and impeccably choreographed dance numbers, albeit animated. It’s what you want from a big-screen version of your favorite show; a lot more, a lot bigger, but still the same show.

If there’s a little bit of a stumbling block of this movie is that its plot is almost too closely tied to the structure of the show. Over the years there have been plenty of great and incredibly funny two-parter episodes and The Bob’s Burgers Movie feels like one of those two-parters. However, instead of a story that’d run for about 50 minutes without commercials, it runs for 102. Some padding was to be expected and much of it is welcome, but there are also several spots where the film drifts and could have been tightened up a tad. But if the movie was any shorter they’d risk cutting a couple of the great songs that stand up to the heavy hitters from Menken or Sondheim and animated dance choreography that’d humble Michael Kidd or Jerome Robbins. But through it all, the film never loses the heart of the show: its unending sense of hope. The Belchers are almost always against the ropes and one bad check away from financial ruin, but they keep pushing and working and somehow they keep just barely making it - but making it nonetheless. That’s the joy of the series that perfectly translates to this big cinematic undertaking. 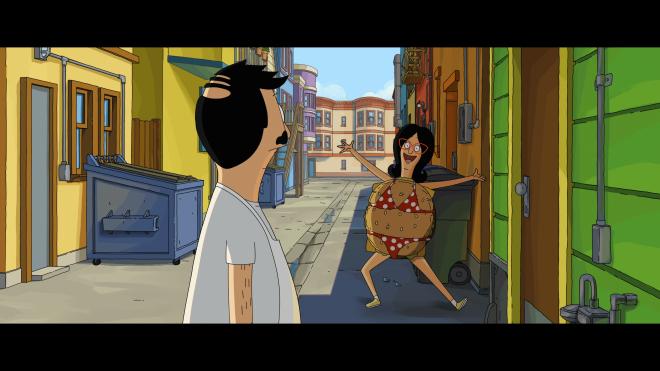 Little niggles aside - I had a blast with The Bob’s Burgers Movie. I love the show and have watched through the series numerous times over the years and this was a real treat. The talented voice cast is on their A-Game with series favorites like Larry Murphy’s lovable Teddy, Zach Galifianakis’ Felix Fischoeder, Gary Cole’s Sgt. Bosco, David Herman’s Mr. Frond along with regulars Jordan Peele, Brian Huskey, Bobby Tisdale, and Aziz Ansari among numerous others all chipping in for this grand adventure. As an old guard fan, I was happy with all of the references and callbacks peppered throughout but thankful it never felt unwieldy for newcomers. If you’ve only seen a few episodes - or none at all - you shouldn’t feel the need to rush through the show to enjoy the movie. Pop some corn, or better yet pick up a burger, and have fun!" 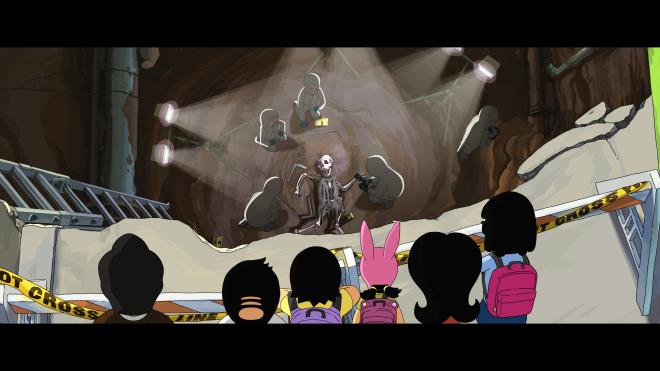 The Bob’s Burgers Movie orders out for a Best Buy exclusive 4K Ultra HD Blu-ray SteelBook release. This two-disc 4K UHD + Blu-ray + Digital set is currently the only way to get a 4K copy of the film on disc. The attractive SteelBook packaging recreates the neighborhood the Belchers live in on the outside while the inside art depicts Bob’s kitchen. The 4K version is pressed on a BD-66 disc with the 1080p scoring a BD-50 - both are Region Free. The 4K disc loads to a near-identical menu setup as the 1080p disc, the only difference is there aren’t any bonus features on the actual 4K disc. 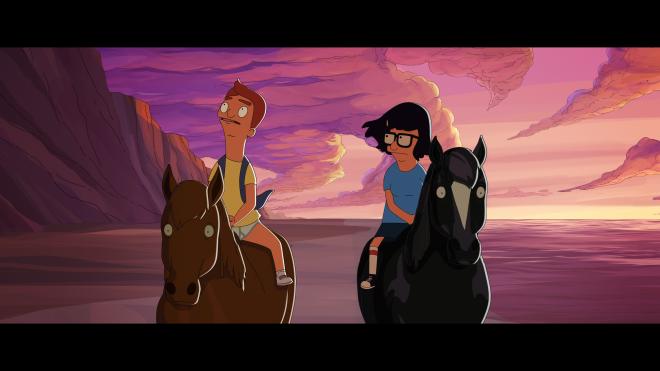 I wasn’t expecting to see much of an improvement for The Bob’s Burgers Movie in 2160p HDR10, but sure enough, there is a welcome uptick in overall visual clarity and color. I haven’t been able to find a clear answer if this is a native 4K presentation or a 2K upscale, there’s some conflicting info on that end, regardless this is an appreciable improvement over the 1080p disc. Maybe not “blow your hair back” demo-worthy, but fine lines and details are sharper and more cleanly defined with a much more notable sense of image depth. This is especially the case with the numerous song-and-dance numbers where there’s enhanced three-dimensional space as the characters walk through school, town, or dance around with some of the Wonder Wharf carnies. 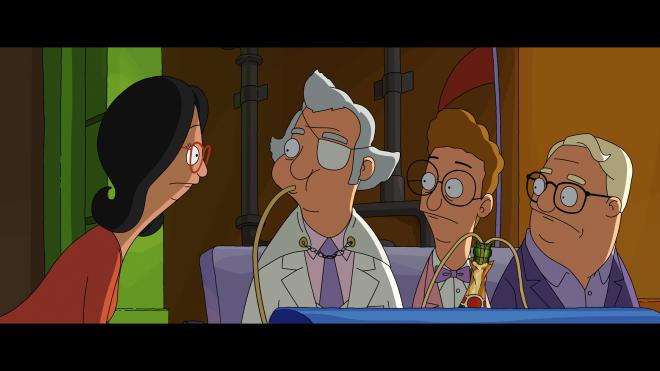 HDR10 offers a generous enhancement for colors, shadows, and black levels. In keeping with the show, this film offers up rich primaries and I found shades of blues, yellows, and reds look fantastic with more brilliance than the 1080p disc. Likewise, the crisp whites in eyeballs or on Bob’s apron are nice and bright. My lone little niggle was a chase sequence towards the end that was a little too dark looking but not so bad you couldn't see what was happening. With that, it could be chalked up to bright viewing conditions since I had to view this in the middle of the day. It’s the only slight drawback I have for an otherwise impressive and welcome 4K HDR presentation. 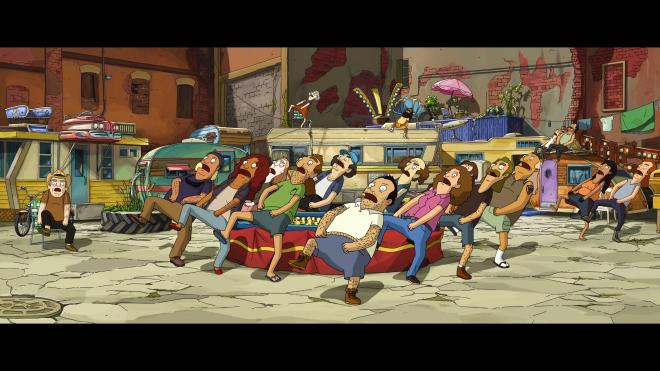 When you’ve got a big animated musical you need a big soundscape and this DTS-HD MA 5.1 track delivers the goods. From the very first opening number, the film sounds appropriately large and engaging for a big-screen version of the show. Simple sound effects like an echo in the restaurant that is perpetually void of customers or a hose from across the street at Jimmy Pesto’s all pickup and carry in this soundscape. Then the big song and dance numbers kick in and the mix opens up for a fully engaging surround experience. Throughout dialog is crystal clear without any issues. Scoring is on point. Levels are spot on without any need for monitoring and there’s plenty of imaging to keep the channels active and moving. All around a terrific mix for this film. 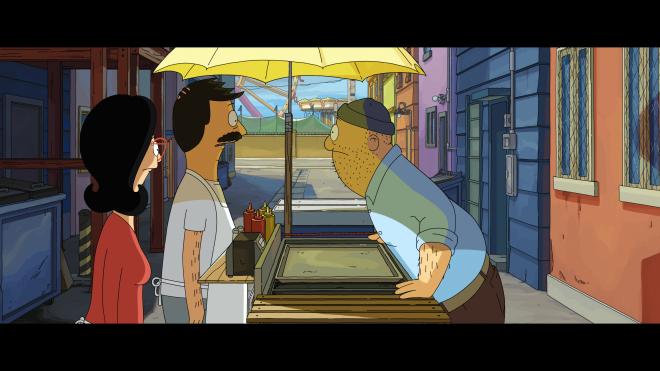 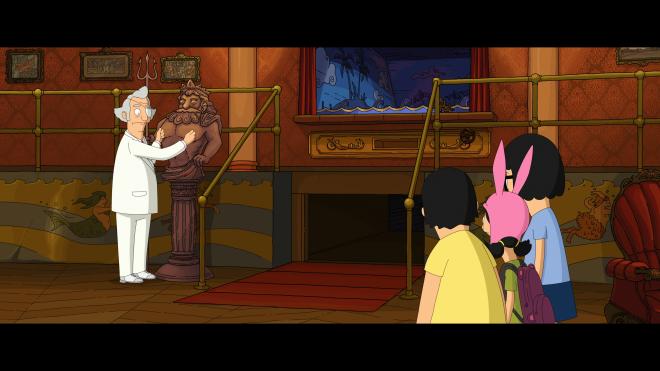 None of the bonus features are present on the 4K disc, only the 1080p Blu-ray disc. As I mentioned in the Blu-ray review, this is an excellent selection of informative but also very entertaining bonus features. If you’re a big Bob’s Burgers fan you’ll enjoy digging through them. 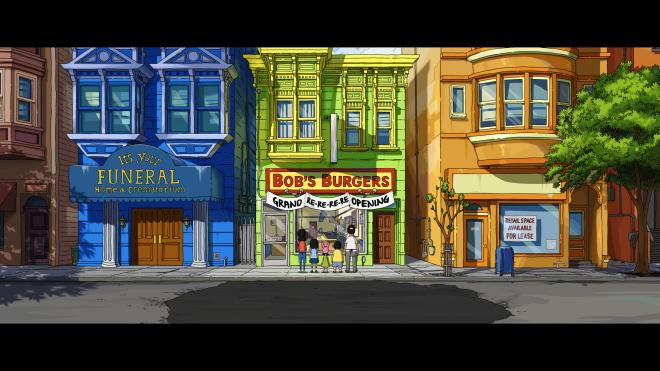 The Bob’s Burgers Movie is here and I couldn’t be happier. I missed out on the chance to catch this film in theaters but I’ve watched it several times now and I’ve loved every minute of it. The story has all the heart and charm of the show and the song and dance numbers are infectious. You can now pick up The Bob’s Burgers Movie on 4K Ultra HD Blu-ray exclusively to Best Buy with deluxe SteelBook packaging. This is currently the only way to get the film in 4K on disc. The added resolution with HDR10 offers up a number of pleasant enhancements with cleaner lines and details with bright bold colors. The same great audio mix and terrific package of bonus features are carried over. If you’re a fan of the film this is a great flick and if you need the film in 4K, this Best Buy exclusive release is a great pickup. Highly Recommended