Director Sam Raimi delivers an incredibly imaginative and visually engaging spectacle in Doctor Strange in the Multiverse of Madness, the latest installment to the ever sprawling MCU saga that features a fantastic performance from Elizabeth Olsen as the troubled, traumatized Scarlet Witch. The horror-fantasy superhero flick debuts on Ultra HD with a spectacular, reference-quality 4K video, an immersive Dolby Atmos track but a small selection of supplements. Nevertheless, the overall UHD package is Highly Recommended.

If Kevin Feige and the folks at Marvel Studios continue down this path of expanding their shared cinematic universe with multiple storylines colliding into one massive collective, then Doctor Strange in the Multiverse of Madness could serve as the archetype of what will predictably go wrong with their approach. Or at the very least, their ambitious undertaking could foreseeably backfire on them. It is a thorny thought that has been pestering me since the conclusion of the Loki series, which remains exclusive to Disney's streaming service. With every MCU installment, which includes everything only available on Disney+, audiences are expected to be familiar with various other stories in order to follow along with the latest entry. Each new movie is not a closed standalone feature, one complete movie all unto itself. Instead, it is but one continuation after another, an extension of a previous title not always immediately related yet extending into another title not always immediately related.

And in this supposed sequel to 2016's Doctor Strange, the script by Michael Waldron (Loki) is more of a direct follow-up to the WandaVision series and somewhat loosely connected to Spider-Man: No Way Home, meaning the filmmakers are relying on the audience's knowledge of that streaming series in order to follow certain details of this story. Also, the plot's emotional weight and its impact in the final moments are almost entirely placed on the shoulders Elizabeth Olsen and her Wanda Maximoff character, whose traumatic journey, all her own, is one extraordinarily long thread reaching as far back as 2015's Avengers: Age of Ultron. Thankfully, Olsen has the skill and talent to carry the weight as both the story's emotional center and as the villainous but deeply-troubled Scarlet Witch, genuinely delivering on that dramatic turn. I admit enjoying her redemptive arc and admire the filmmakers for focusing this MCU chapter on her, but I have to wonder if those who didn't watch the series understood its larger significance. 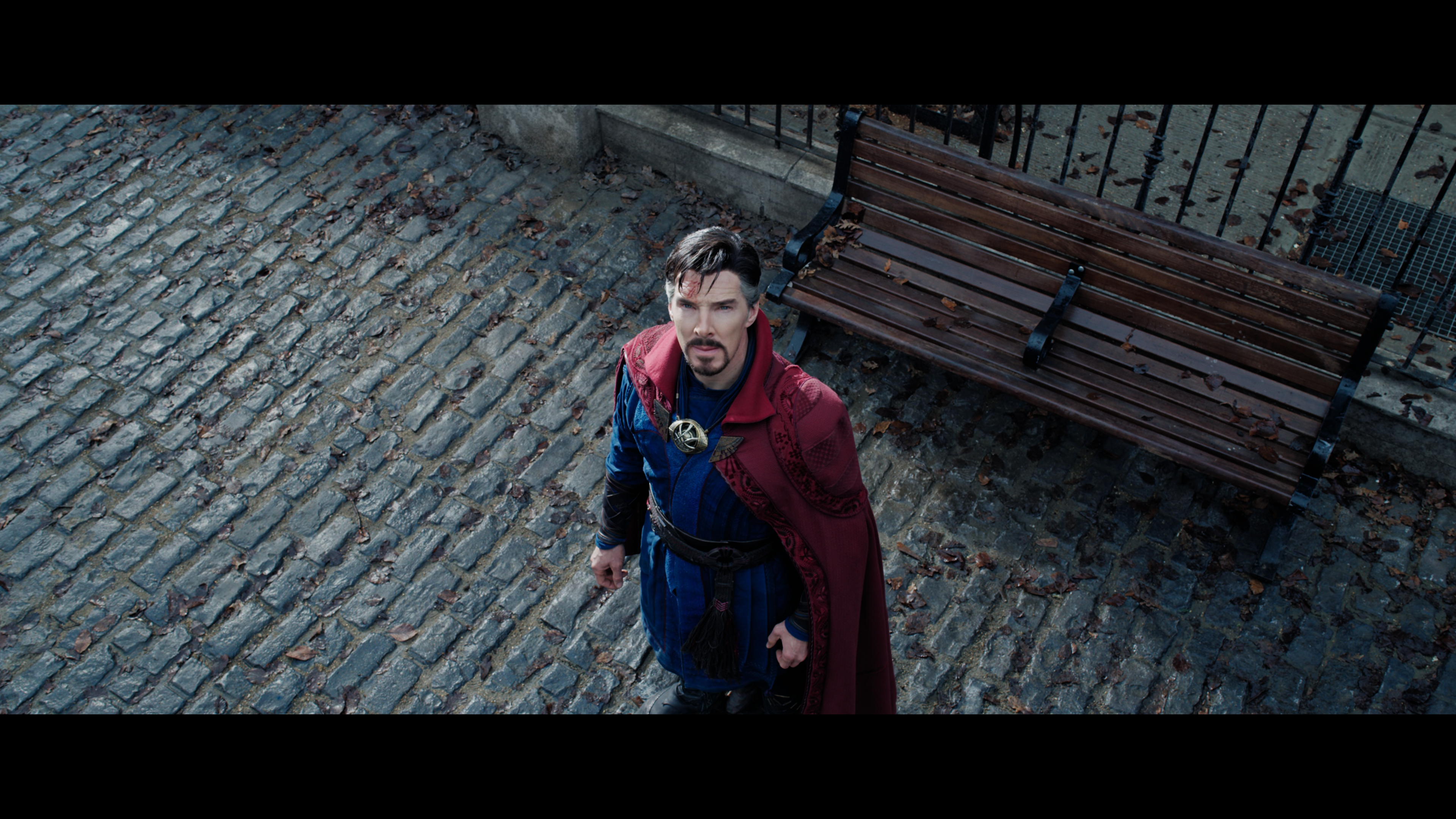 Granted, the entire MCU saga, which will be at thirty movies by the end of 2022 with three more the following year and several others already in the works, has always been a giant potpourri of storylines continuously bleeding into one another. But Doctor Strange in the Multiverse of Madness is on another level and the epitome of intertextuality to the maddeningly extreme. It's a prime example of the MCU becoming its own multiverse of filmgoing madness where the audience is expected to be familiar with various characters and their individual threads in order to make sense of the latest installment they are currently watching. And it's to the credit of director Sam Raimi for keeping this universe stable enough to deliver an engaging and entertaining movie while successfully introducing a new, interesting character in the star-bursting, verse-jumping America Chavez (Xochitl Gomez). But even he can't help himself from tossing in the occasional allusion, such as a Bruce Campbell cameo or a floating 1973 yellow Oldsmobile.

None of this is to suggest that Doctor Strange in the Multiverse of Madness is a bad movie because it is quite entertaining with incredibly imaginative visuals carrying some awesome horror elements. In fact, there are a few moments that toe the line of more R-rated action, but in Raimi's capable hands, it's kept on this side of family-friendliness while still delivering the thrills balanced with several breaks of humor or some cool psychedelic imagery. Watching two sorcerers explain Spider-Man's abilities is hilarious, and the trippy dissolve edits as Karl Mordo (Chiwetel Ejiofor) talks about the Scarlet Witch are surprisingly impressive while Wanda battling the Illuminati arguably remains the movie's highlight action piece. And in spite of a plot designed with prerequisite backstories to fill in vital details, the fantasy-laden superhero flick nonetheless delivers on its promise of a kaleidoscopic, hallucinatory thrill ride. Only, it's a shame that as this cinematic universe continues to grow, audiences are expected to do a bit of homework in advance in order to better enjoy each new installment to that ever sprawling universe.

Walt Disney Studios Home Entertainment brings Doctor Strange in the Multiverse of Madness to 4K Ultra HD Blu-ray as a two-disc combo pack with a Digital Copy code, which can be redeemed via MoviesAnywhere for access to the 4K UHD version with Dolby Vision and Dolby Atmos. Inside the black, eco-vortex case with a glossy, embossed slipcover, the dual-layered UHD66 disc sits comfortably opposite a Region Free, BD50 copy. At startup, viewers are taken directly to a static screen with the usual selection along the bottom and music playing in the background. 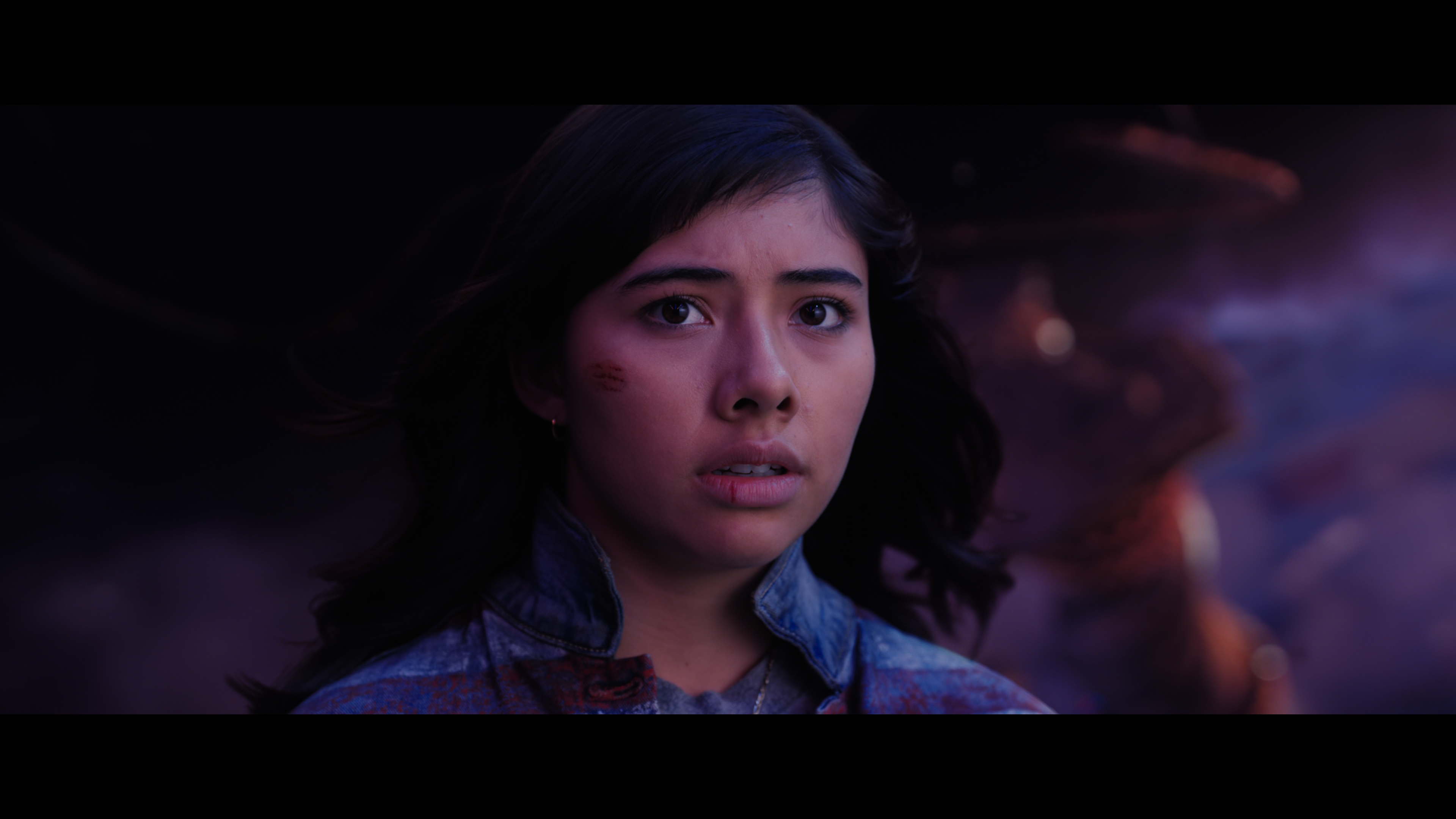 The MCU jumps into the multiverse of Ultra HD with a striking, reference-quality HEVC H.265 encode, bursting with a vibrant, energetic assortment of colors from start to finish. The HDR10 presentation displays sumptuous primaries with reds, in particular, ranging from the dynamic crimson of Strange's cloak and the candy rose of swirls during the scene with the Book of Vishanti to the deep, fiery cherry and ruby combinations associated with the Scarlet Witch. When America and Strange jump to Karl Mordo's universe Earth-838, the palette is brimming with a spirited array of richly-saturated secondary hues, and it's the full-bodied yellows, flamboyant cotton-candy pinks and a dramatic mix of lavender, violets and cerulean blues that really stand out. Facial complexions are consistently revealing with accurate peachy-rose tones in the cast and lifelike textures, exposing the tiniest wrinkle and negligible blemish.

Shot exclusively on highly-quality digital cameras capable of up to 8K resolution and later mastered to a 4K digital intermediate, the native 4K transfer also debuts with razor-sharp definition, maintaining striking clarity during the many fast-paced action sequences. With spot-on, vivid contrast balance for a majority of the runtime, we can plainly make out the small objects decorating the background, the cracks and minute debris in Evil Strange's universe, and the individual bricks of Kamar-Taj. The bonkers visuals are further complemented by crisp, radiant specular highlights that supply a tight, revealing glow in the hottest spots, a liquidity shimmer to Gargantos's slimy body and sharp, narrow brilliance to every sorcerer's magic. All the while, black levels are always true and inky with silky rich shadows that penetrate deep into the screen without ever ruining the finer details, providing the 2.39:1 image with an impressive three-dimensional quality.

The only minor issue holding the UHD video just shy of a perfect score is the ultra-clean digital look of the photography itself, which gives much of the movie a somewhat distractingly hygienic and very sterile appeal. Admittedly, this is more of a personal quibble than an actual fault of the encode, but with several segments having a weird digital, TV series quality to them, it is occasionally noticeable enough to warrant a mention. Also, there are a couple of instances where the contrast appears to mildly clip during Christine's wedding early on as the sun shines through the windows, washing away from the finer features. Aside from that, the transfer is nonetheless exceptional with several demo-worthy moments fans will absolutely love. (HDR10 Video Rating: 96/100) 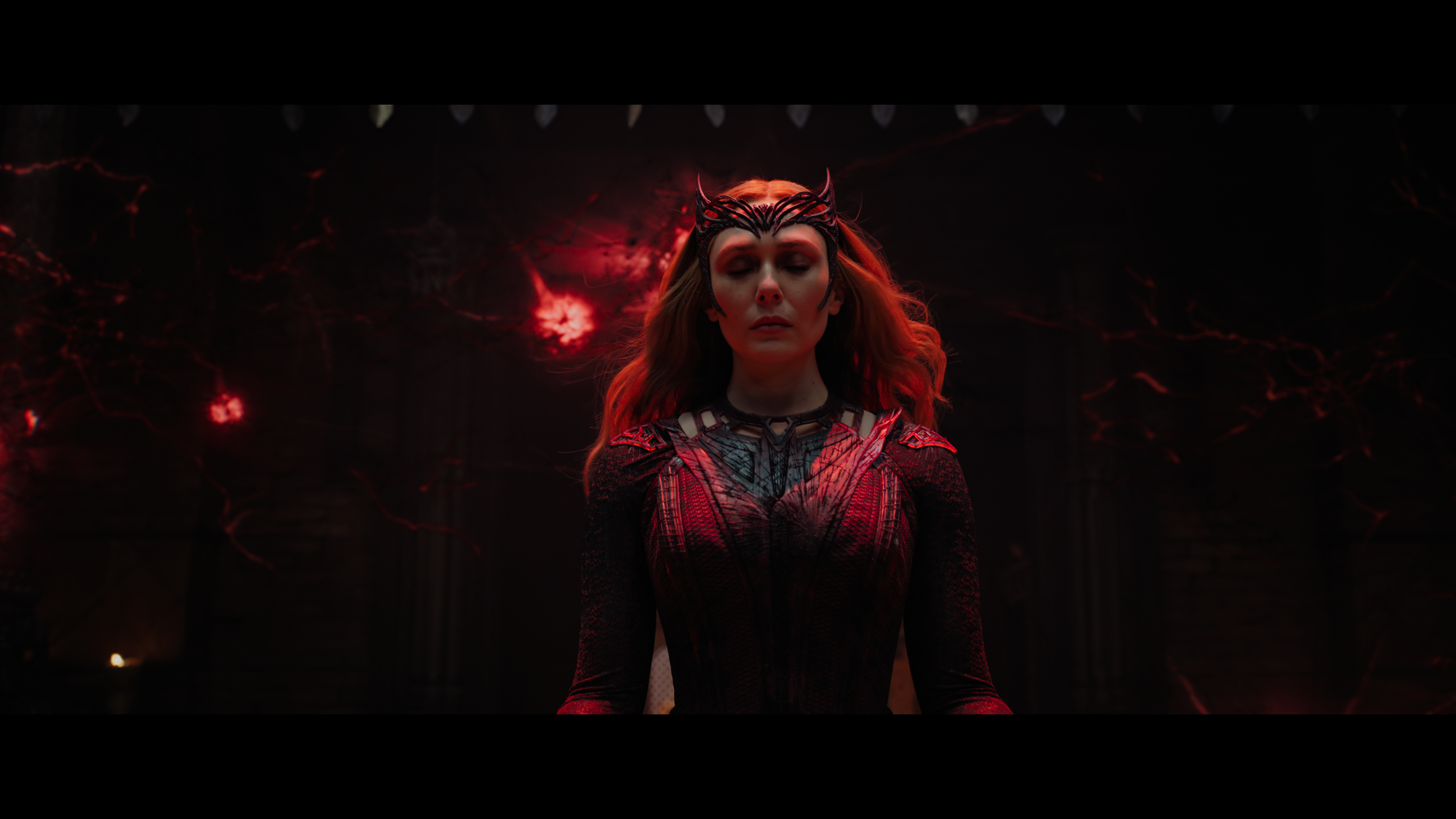 Unlike some of the previous Disney home video efforts of the last few years, this UHD edition of the lastest MCU installment debuts with an impressively awesome and sensational Dolby Atmos soundtrack. It is worth mentioning, however, that I did have to raise the volume up to -5 below reference in order to best enjoy the audio quality. But after making that minor adjustment, the object-based mix immediately gave the system a healthy workout during its opening moments as Strange and America run away from a fiery demon. From there, similar action sequences are layered with a variety of atmospherics convincingly panning between the surrounds and across the top heights. Bits of debris are clearly heard flying overhead amid the chaos, and the water drips from above the listener in one scene while quieter moments come with subtle ambient effects heard in the distance. This is not always consistent, but it's enough to generate an immersive hemispheric soundfield that perfectly complements the loony visuals.

Likewise, imaging feels continuously broad and spacious, busy with lots of background activity discretely and flawlessly moving across the fronts and into the off-screen space and top heights, creating a highly engaging and consistent half-dome soundstage. The mid-range also exhibits superb clarity during the loudest, rowdiest moments with clean distinction in the upper frequencies while Danny Elfman's score displays a great deal of warmth and outstanding definition in the instrumentation. Vocals are always clear and precise above the action and insanity, delivering appreciable intonation in the more emotive performances. Most surprising is a excellently robust and potent low-end providing a weighty, wall-rattling presence to the visuals while unexpectedly digging as low as 22Hz with some authority on a couple of occasions (bass chart). (Dolby Atmos Audio Rating: 96/100) 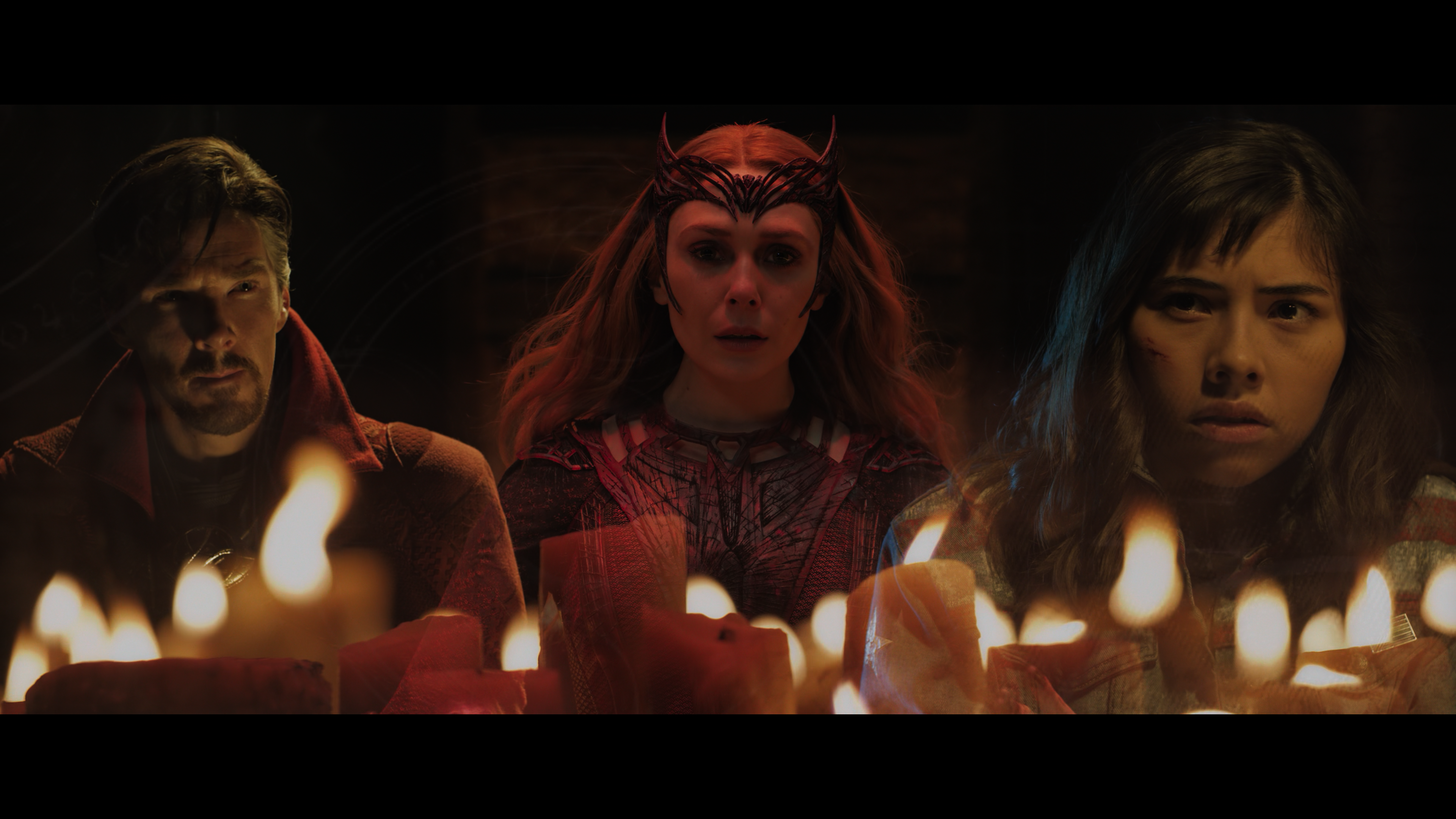 All the bonus material is available only on the accompanying Blu-ray disc. 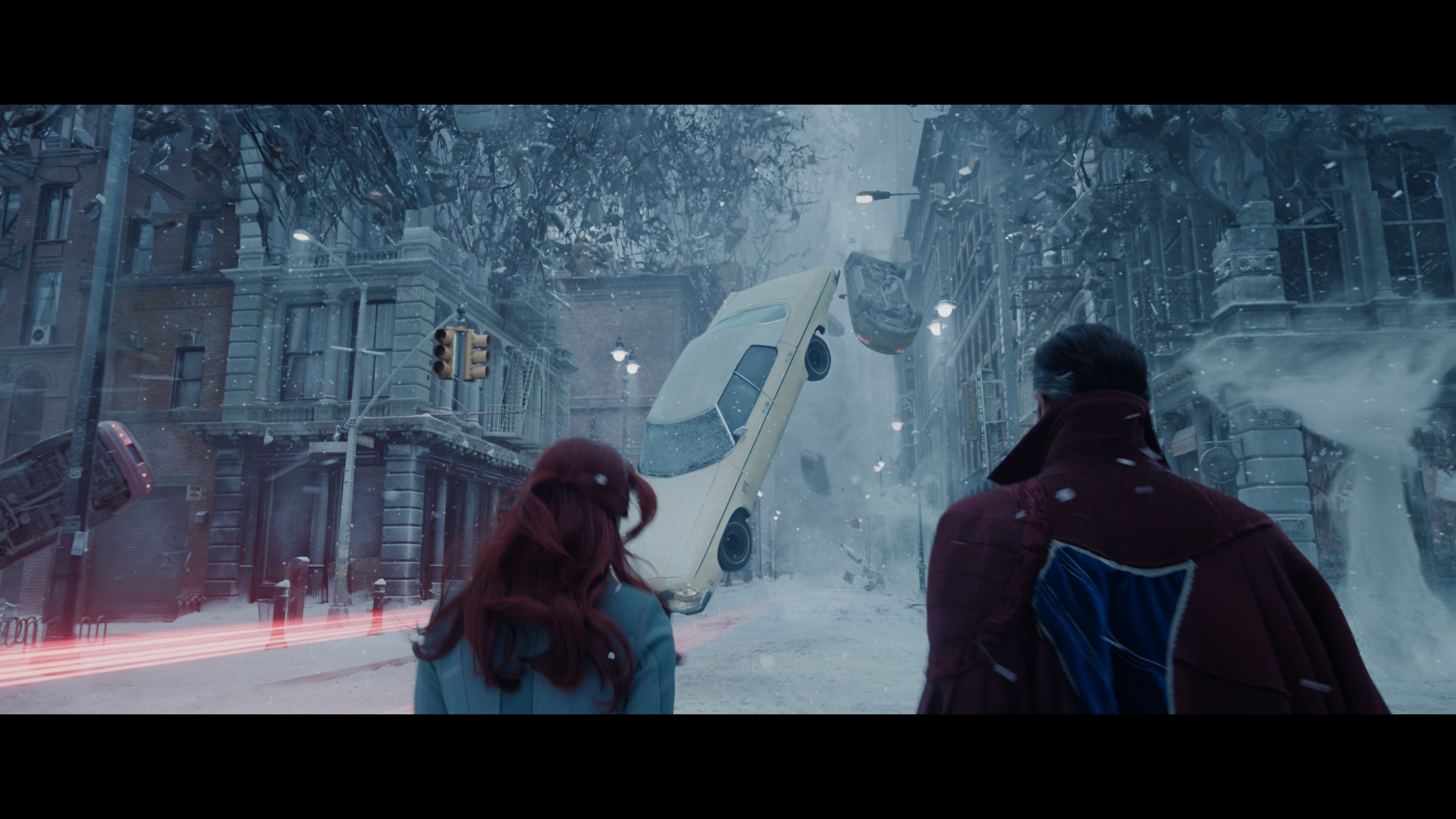 As entertainingly bonkers and visually engaging as Doctor Strange in the Multiverse of Madness is, the latest installment to the sprawling MCU saga serves as the epitome of a film series that will eventually become more of a chore and labor than it's worth. If producers don't tread lightly, this cinematic universe could potentially implode and cause it's own "incursion." Thankfully, and in spite of this personal nitpicking drawback, director Sam Raimi manages to deliver an incredibly imaginative spectacle with a fantastic performance from Elizabeth Olsen. The horror-fantasy superhero flick debuts on Ultra HD with a spectacular, reference-quality 4K HDR10 presentation and an immersive, demo-worthy Dolby Atmos soundtrack. Although a small selection of supplements rounds out the package, this UHD edition is highly recommended.