Starring Tilda Swinton, Jake Gyllenhaal and Paul Dano, Bong Joon-ho's Okja is a conventional coming-of-age adventure tale that follows young farm girl Mija's unwavering rescue mission of her friend Okja, littered with as much whimsy and child-like wonder as it portrays urgent themes about the environment and the human tendency to exploit it. Courtesy of The Criterion Collection, the film returns home on 4K Ultra HD with a demo-worthy Dolby Vision HDR video, a highly engaging Dolby Atmos track and a strong collection of supplements. The overall UHD package is Highly Recommended.

Bong Joon-ho's Okja is at once a conventional, familiar plot about a young, naive child and their unfamiliar bond with their darling pet, which in this case is the young farm girl Mija (Ahn Seo-hyun) and her extraordinary "super pig" Okja. But in the hands of Bong, it becomes an unconventional adventure tale that transcends any genre trappings yet steers through routine tropes that still hit on well-earned, heartfelt moments. Expertly balancing urgent themes about the environment and the human tendency to exploit it with a fanciful, child-like wonder that also feeds the intellect, the film is another outstanding example of Bong's remarkable and talented genius behind the camera. Unlike his action-driven hits The Host and Snowpiercer, here, he elevates simplicity through meticulous, carefully-designed portraits of people doing what they believe is best at the given moment and for the particular situation in which they find themselves.

Bong's formalist approach is the perfect complement to this coming-of-age tale that follows a preteen Mija discovering the destructive harm of capitalism, which quite literally sneaks up on her when a megacorporation comes to take away her childhood friend, a genetically engineered pig. For the first few minutes, we watch Mija and Okja living in an idyllic paradise with only a few modern conveniences decorating grandpa's (Byun Hee-bong) house, namely a vintage CRT TV and an old refrigerator housing a collection of sneakers. And it's in these moments, Bong's style is worth admiring — at once, taking inspiration from Ozu's calmly fixed, dispassionately static camera studying a family at the precipice of momentous change while simultaneously embracing the wondrous magic of CGI breathing life to a pig roughly the size of a minivan. One lovely sequence is the dinner with Okja looking in the window from the other end of the room. The camera moves with more noticeable enthusiasm once Mija's pastoral life has been spoiled. 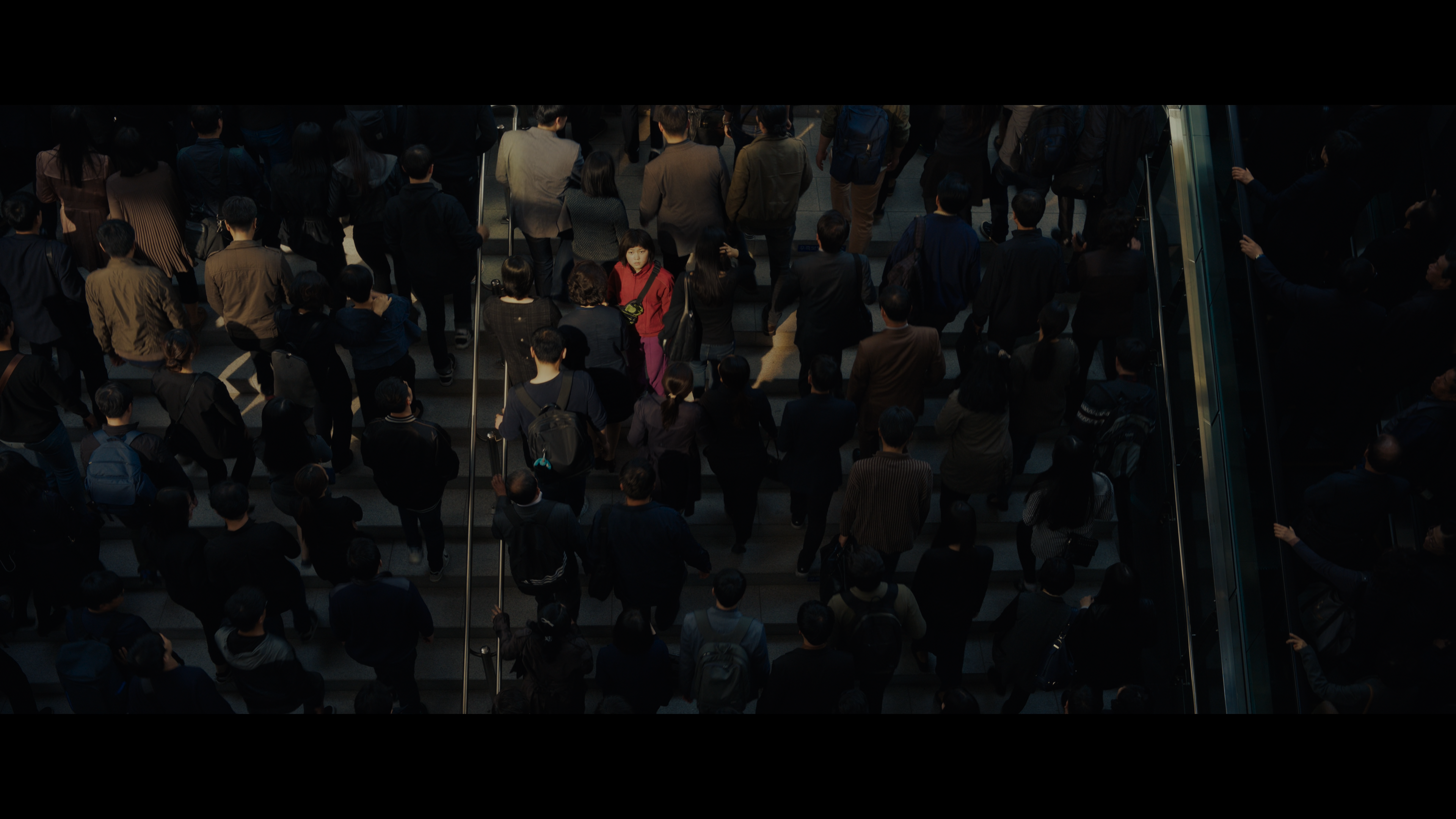 Similar camerawork is afforded also to the pair largely responsible for Mija's unwavering rescue mission — the singular Lucy Mirando (Tilda Swinton) and the outlandishly quirky Johnny Wilcox (Jake Gyllenhaal). Although the story features these characters as the ostensive villians, down to their comically idiosyncratic and arguably off-putting mannerisms, Bong doesn't paint them in such simple, black-and-white brush strokes, slowly blurring the divide to reveal a whole splotch of gray. They, too, are portrayed as incidental victims to the larger economic system that more directly impacts Mija's family and a working-class people barely scrapping to appease the very corporations that also exploit them. Seemingly motivated by well-meaning environmental concerns, they are ultimately driven by an underlying desire to increase their profit and public image while hiding behind meaningless marketing slogans like "eco-friendly" and "non-GMO."

This blurring between good and bad motivations extends to Paul Dano's militant activist Jay and his animal-rights group ALF, which includes Lily Collins and Steven Yeun. They have their heart in the right place — of exposing the Mirando Corporation and their mistreatment of animals — but the innocent, voiceless Okja is ultimately the one taking all the risks in a world where everyone seeks to potentially gain from Okja's suffering. The only truly good person placing Okja's safety and happiness above all else is Mija, whose solitary motivation is to reunite her family, which is essentially at the heart of what makes Okja such a marvelously memorable film. Like watching a live-action Miyazaki-Studio Ghibli fable, Bong Joon-ho balances the magical and whimsical with the unflinching and heartbreaking, reminding his audience that as fantastical and otherworldly as this story may seem, it is nonetheless speaking to a contemporary truth.

This 4K Ultra HD Blu-ray edition of Bong Joon-ho's Okja comes courtesy of The Criterion Collection (spine #1133) as a two-disc combo pack. Housed in their standard clear keepcase, the dual-layered UHD100 disc sits comfortably above a Region A locked, BD50 copy on the same panel. Accompanying the discs is a foldout pamphlet with an insightful essay entitled "Big Love" by author and culture critic Karen Han. There are no trailers or promos before being greeted by the distributor's normal static menu screen and options. 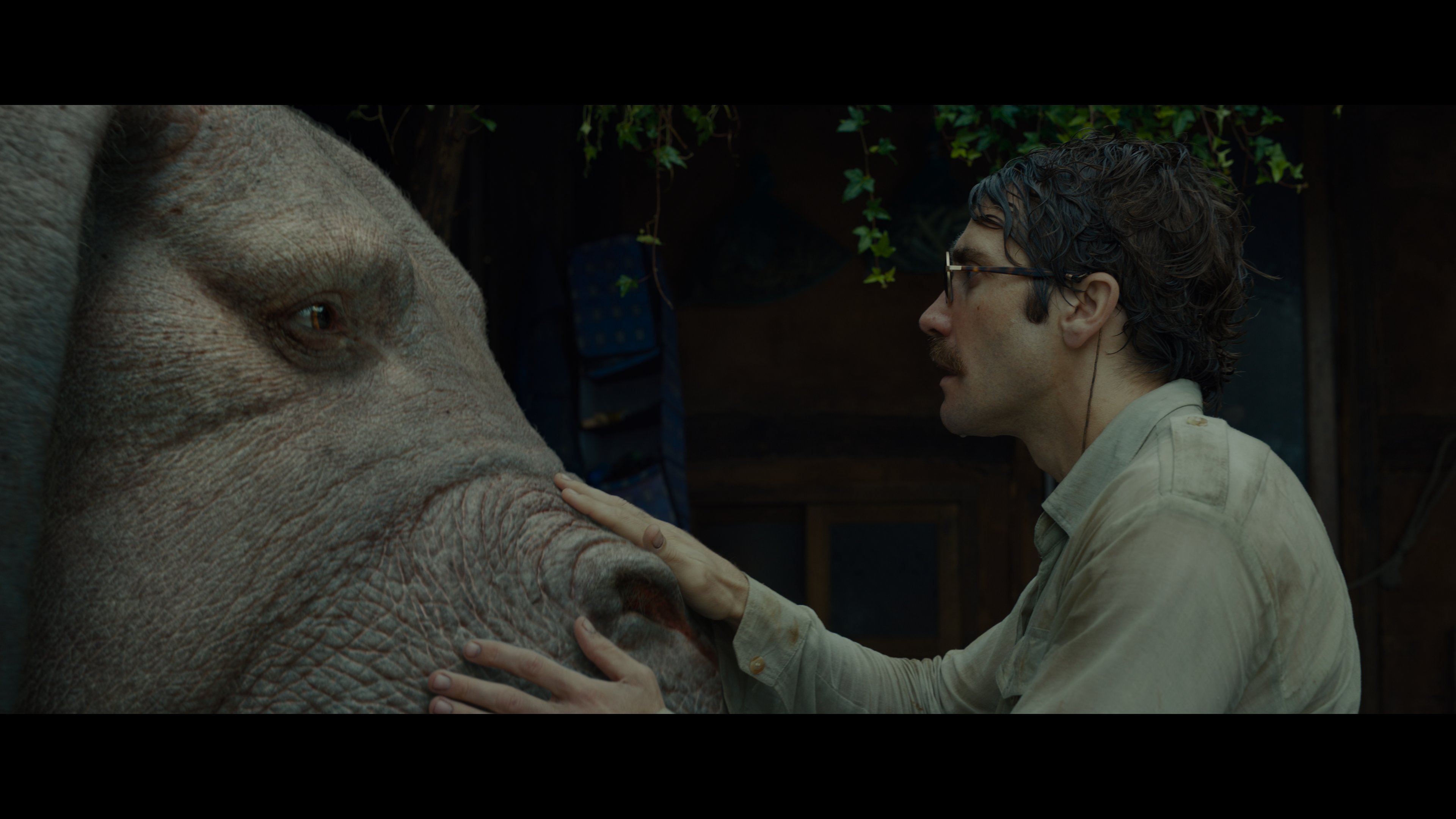 The adventure returns home with a nearly immaculate yet demo-worthy HEVC H.265 encode, superseding its Netflix streaming counterpart. According to the liner notes, the native 4K transfer was struck from its original digital source under the supervision and approval of cinematographer Darius Khondji and director Bong Joon Ho, and the results are simply outstanding. The 2160p picture maintains razor-sharp details for most of the runtime, exposing every nook and cranny in Mija's home while every leaf and blade of grass are striking. Individual hairs are discrete, the fine threading in the costumes is distinct, the lettering of various ads throughout is clear and legible, and the most minor features of Okja are impressively well-defined. However, there are several instances of mild aliasing and moiré fringes along the sharpest lines and edges that occasionally rear their ugly heads and sadly, keep the 4K video on this side of perfection. The most egregious example is when Mija races through the streets of Seoul to jump on top of the truck.

Be that as it may, the real win here is the spot-on contrast and brightness balance delivering pitch-perfect, ultra-clean whites and velvety, inky-rich blacks, providing the 2.39:1 image with a notable three-dimensional quality and a lovely cinematic appeal. Specular highlights furnish the various surfaces and light sources with a crisp, radiant glow while allowing for excellent visibility in the far distance and within the hottest spots, which is also true for the shadow details during the darker, poorly-lit segments. The Dolby Vision HDR presentation also bathes the visuals in a sumptuous array of full-bodied primaries with the lively greens of the foliage at the beginning and the cold, steely blues of the second half beautifully complementing the plot's themes. The standouts in Khondji's photography, however, are the lush, vibrant collection of secondary hues, like the subtle lavenders, royal purples, taffy pinks and the variety of marigold orange shades washing over a good chunk of the drama. Facial complexions are highly revealing with lifelike textures and natural, peachy-rose tones in the cast. (Dolby Atmos HDR Video Rating: 96/100) 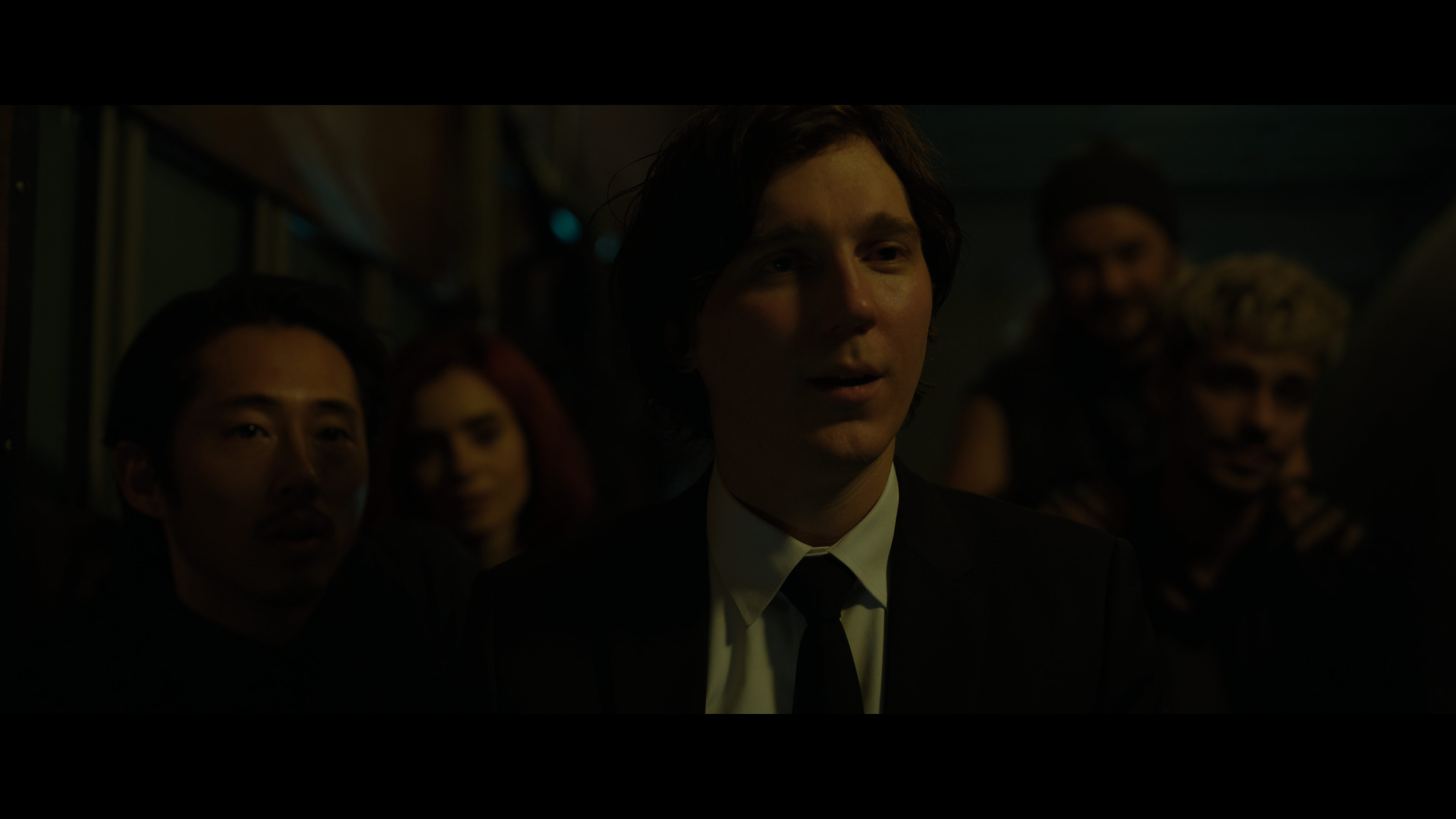 Bong's eclectic dark comedy arrives to home theaters with a remarkable and highly engaging Dolby Atmos soundtrack that effectively takes full advantage of the object-based format. Right from the opening moments, imaging feels expansive and vast with the sounds of local wildlife clattering from every direction while the leaves of trees are heard rustling all around. As the story progresses from the mountains into the cities, various ambient effects continue panning flawlessly from the surrounds and fronts to the height channels, generating an immersive hemispheric soundfield. All the while, dialogue remains well-prioritized and consistently intelligible with a few instances where the vocals even move around the room depending on the perspective of the camera's focus in relation to the characters. At the same time, the mid-range exhibits superb distinction and separation during the loudest action segments while the musical score enjoys striking clarity and acoustical detailing within the orchestration. The low-end could be a tad stronger, but the 3D audio mix nonetheless comes with plenty of oomph and weight to provide the visuals and music with a great sense of presence. (Dolby Atmos Audio Rating: 96/100) 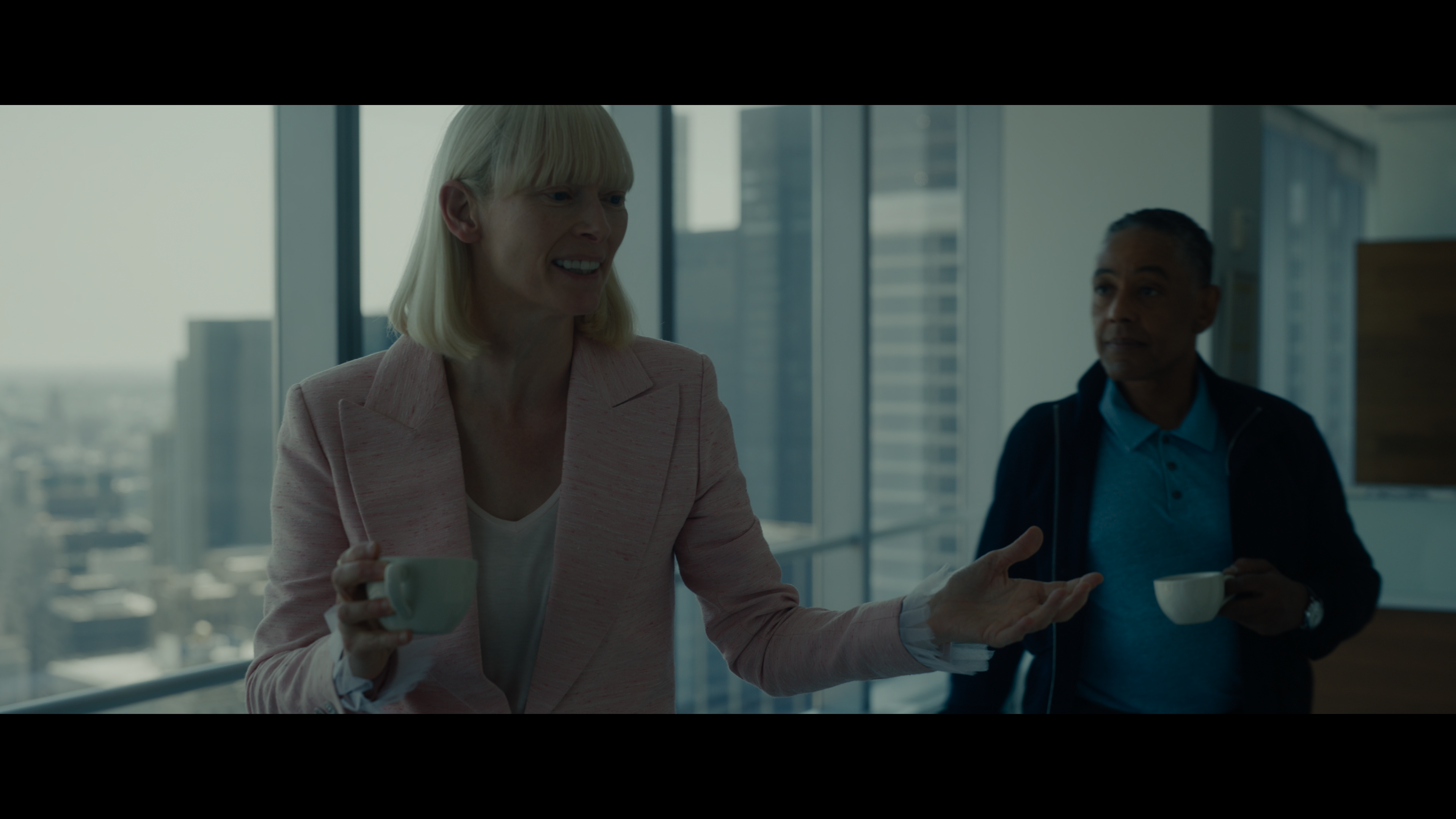 All the bonus features are collected on the accompanying Blu-ray disc. 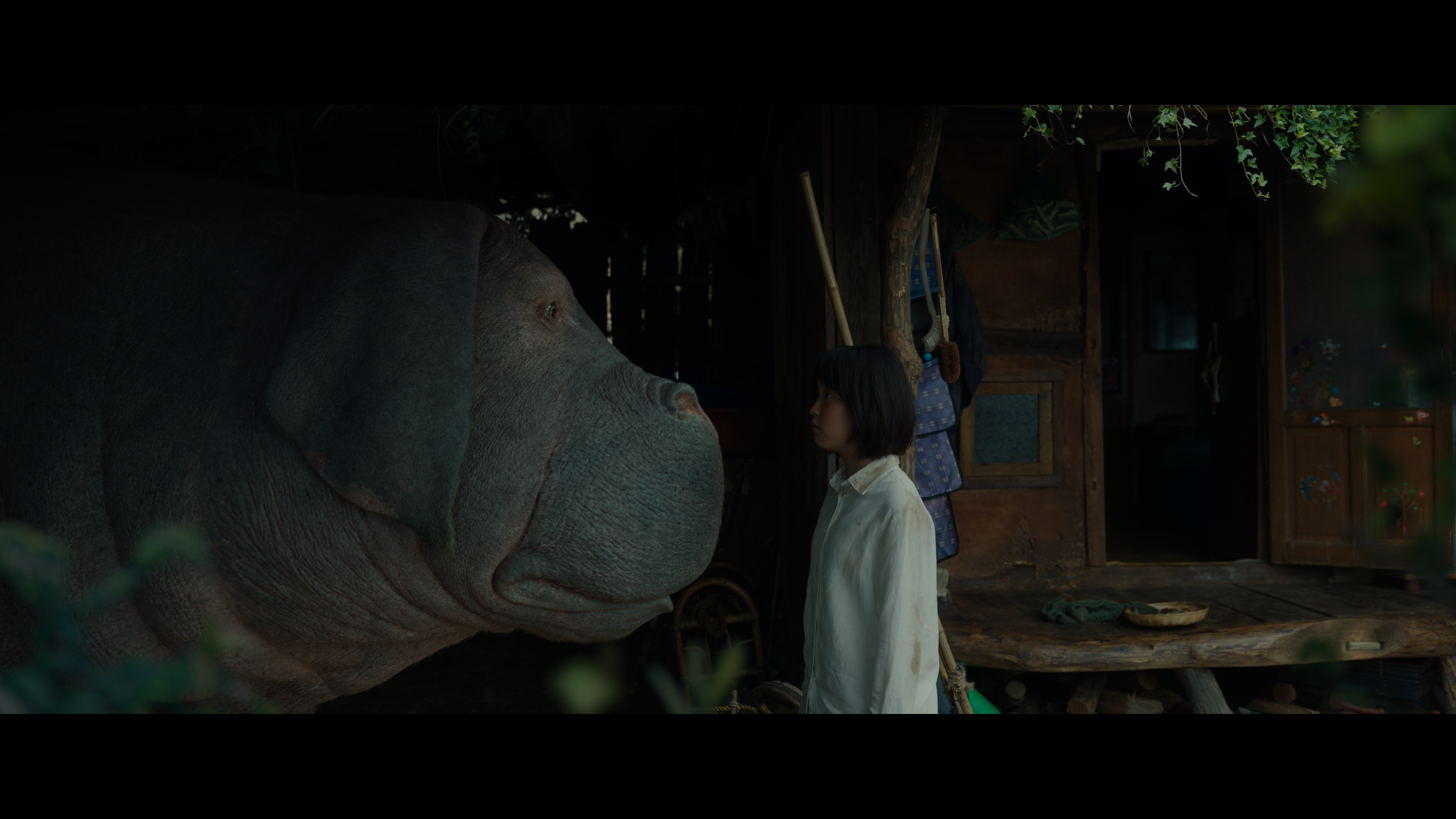 A conventional coming-of-age tale becomes an unconventional fantasy adventure in Bong Joon-ho's Okja, littered with as much whimsy and child-like wonder as it portrays urgent themes about the environment and the human tendency to exploit it. Following the young farm girl Mija's unwavering rescue mission of her friend Okja, the meticulously stylized and genuinely heartfelt film is another display of Bong's remarkable and talented genius behind the camera. Courtesy of The Criterion Collection, the film returns home on 4K Ultra HD with a nearly immaculate, demo-worthy Dolby Vision HDR presentation and a highly engaging Dolby Atmos soundtrack. Featuring a healthy collection of supplements, the overall UHD package is highly recommended.