Fans of martial arts-infused bands and ninjas rejoice! Miami Connection kicks 4K Ultra HD Blu-ray butt with a slick new three-disc set from Vinegar Syndrome! Woo-sang Park and Grandmaster Y.K. Kim's 1987 action flick offers all of the high-kicking, sword-wielding, blood-letting hallmarks of a classic Cannon film only somehow made independently of that legendary studio. This isn’t your traditional piece of classic cinema, this is crowd-pleasing cult exploitation at its finest! With an excellent 4K transfer, an alternate cut, and tons of bonus features, this is a stacked release for collectors - Highly Recommended!

It’s Miami in the 80s and cocaine is everywhere. The lucrative illegal powder is in such hot demand that people will do anything to get it - even kill for it! After a biker gang of ninjas wipes out a bunch of dealers and makes off with the dope, they head back to Miami to party only to discover the martial arts-infused band Dragon Sound is the hot new headliner at their favorite club. The band members are all orphans, go to school together, train in Taekwondo, and are best friends. This bond will be tested when the biker gang ninjas suit up for a fight to the death for martial arts supremacy in Miami!

Now, this is one of those movies where I do have to explain my five-star ranking. In a traditional sense, Miami Connection isn’t great, to say the least, but for sheer entertainment value, it’s the tops. From the first ninja fight to the last ninja fight, the movie is a true crowd pleaser. Between the plastic wrap-thin plot, the ridiculous dialog, and the incredibly gory fight sequences, there’s never a dull moment. If you’re a fan of schlock exploitation flicks, Miami Connection is sweet manna from heaven. 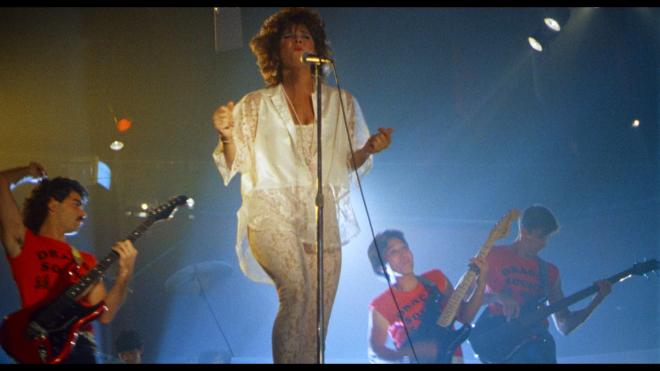 Part of what makes this film so fun is its undeniable infectious earnestness. This isn’t a movie that is going out of its way to be bad or overly daffy to play to the midnight movie crowd. It just turned out that way. This is a movie that’s trying so damned hard to be amazing. It’s well shot, action sequences are impressive enough, and it throws in a colorful cast of characters played by amateur actors who actually know how to deliver their lines. But its script and story betray its amateur roots. Just the concept alone feels like an over-enthusiastic game of “Yes, and…”

“Alright, this movie is about five best friends who study Taekwondo.”

“Yes, and they’re in a band together.”

“Yes, and they all go to school at the University of Central Florida.”

“Yes, and they’re all orphans.”

“Yes, and they fight a group of biker ninjas!” 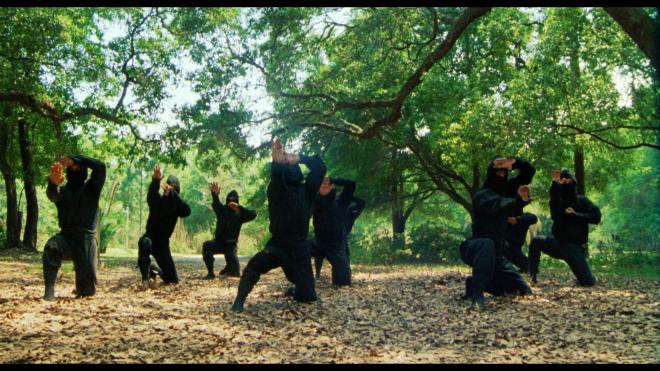 With classic Wiseauvian grit and determination, Y.K. Kim wrote, starred, and self-financed this venture putting all of his assets on the line and he nearly lost everything. He was so sure that he had a hit that even after every major studio and independent turned him down, he pushed on and got it released… and it went nowhere playing in only a few cities before fading into complete obscurity. Thankfully a programmer at Alamo Drafthouse acquired a copy and this film has since enjoyed a resurgence and found its legs in the midnight movie circuit. And after a fun run on Rifftrax, Miami Connection now fully enjoys its true cult classic status.

It’s Y.K. Kim’s enthusiasm and his impressive skills as a martial artist that carry this film to the thrilling - and bloody amazing final fight. As we’ve seen over the years it’s pretty easy to make a terrible movie. It’s not easy to make a good movie that turned out bad. Yeah, this movie isn’t necessarily a traditional five-star film, but because this movie tried so damn hard to be great its failures are that much more entertaining and endearing. Sure, I could facetiously slap this with a cynical one or two-star review, but I'm not going to do that. This cast is giving it everything they’ve got. Like The Room, you can laugh at it - or better yet - you can laugh with it. A true crowd pleaser through and through; if you can’t get to a midnight screening, gather your friends for a backyard projection show. Everyone should have a blast! 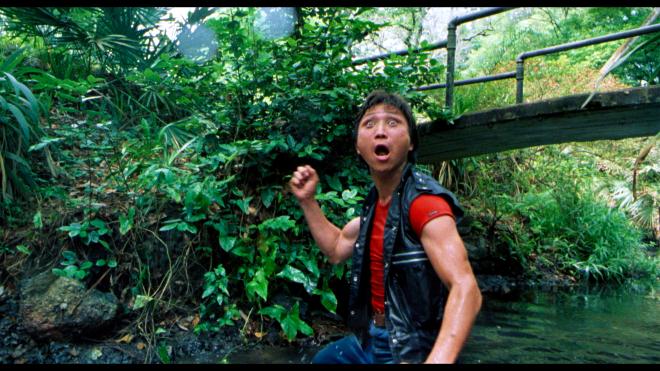 Vital Disc Stats: The 4K UltraHD Blu-ray
Miami Connection gets a dutiful home video upgrade to 4K Ultra HD Blu-ray thanks to the folks at Vinegar Syndrome. This new three-disc 4K Ultra HD Blu-ray + Blu-ray set gives you the film in 4K, 1080p, and a limited pre-release cut titled Escape From Miami. The discs are housed in a standard three-disc black case and are not stacked. The case offers reversible insert artwork with custom slipcover and slipcase with newly-commissioned artwork. 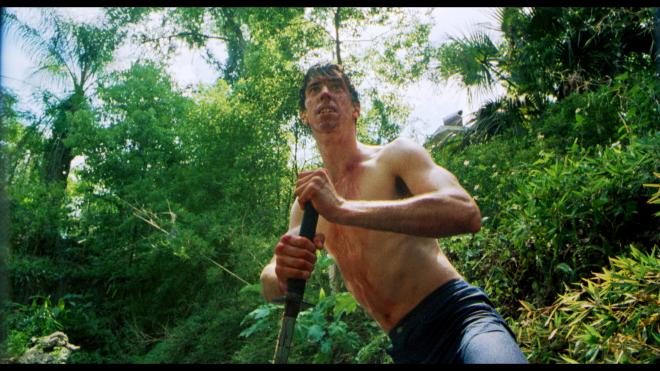 My first outing with Miami Connection was the Rifftrax digital release and while I loved the riffing of the guys the overall A/V quality left a lot to be desired. My understanding was they used the same source elements as the 2012 disc - which I don’t have for a basis of comparison. But just looking at this new 4K HDR10 transfer sourced from the rediscovered 35mm interpositive, the improvements are instantly appreciable and welcome!

Details are terrific allowing you to soak in this film’s visual flavor which toes the line between an 80s club scene music video and a school recruitment industrial video. Costuming is this delightful mashup of 80s action movie stereotypes from ninja costumes to slick-man 80s deconstructed jackets to rough and tough surplus camo biker gear. Throughout, this eclectic collection of textures and facial features is fully appreciable. Film grain offers up a natural texture without any signs of smoothing. 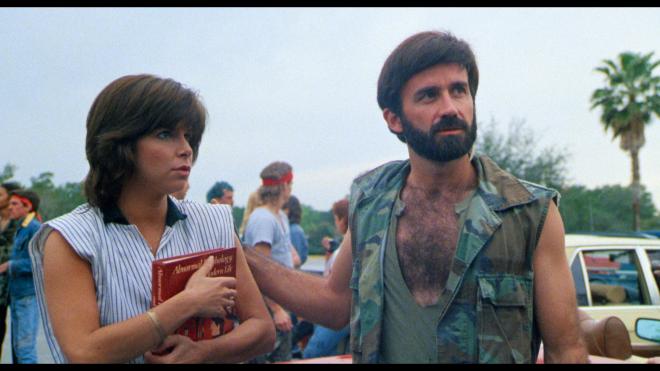 With all of the 80s clothing and stylings, there’s plenty of color and primary pop to be enjoyed with natural healthy flesh tones. Black levels are largely on point giving the image a terrific sense of depth. The opening ninja fight where they steal the drugs edges a little close to crush, but thankfully avoids that pitfall. Whites are bold and crisp without blooming. Elements are in overall very good shape, there’s some slight speckling and small scratches here and there, but nothing so serious to be distracting. All around a great-looking transfer.

For the 1080p version of Escape From Miami, the transfer was sourced from a 35mm interpositive but hasn’t undergone the same level of restoration and cleanup work. It’s still pretty good but there are more rough spots for scratches, colors aren’t as sharp, and black levels are thicker. While not as strong as the 4K transfer or 1080p transfer o, it’s far from unwatchable. 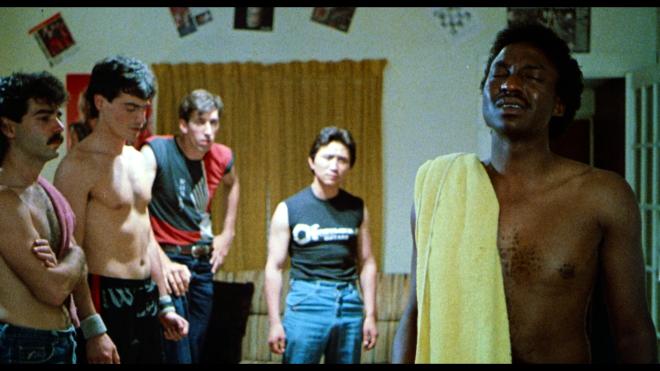 Miami Connection comes with an impressive DTS-HD MA 2.0 audio track. Between the band performances and the fight sequences, there’s an impressive amount of imaging to the show. Dialog is reasonably strong, there are a couple of mumble spots here and there that probably should have been looped, but they’re not completely inaudible. Music cues get plenty of power and the film’s catchy songs that are played many times throughout are perfect earworms. Hiss and other age-related issues aren’t a problem. 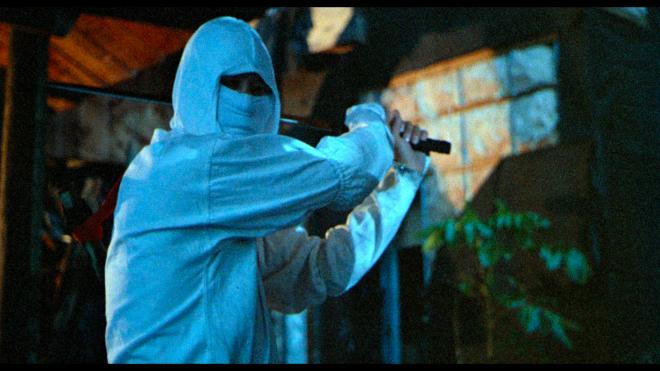 One of the things I love about Vinegar Syndrome releases is that it doesn’t matter how crazy the movie, they’re going to give you some pretty great bonus features to pick through. This release of Miami Connection is stacked offering an informative audio commentary, a new making-of documentary is tossed in the mix with archival interviews, a Sound Dragon reunion, and the alternate cut of the film titled Escape From Miami. Between all of that, you’ve got a lot to dig into for this release. 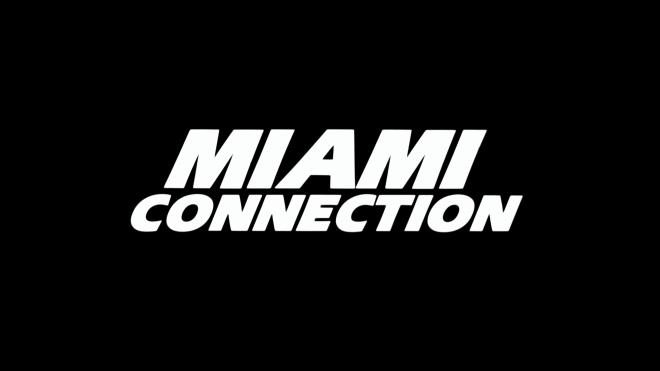 Miami Connection is one in the long line of do-it-yourself films made by passion, grit, and gumption only this one is actually incredibly entertaining. Grandmaster Y.K. Kim had an idea for a movie and he leveraged everything he had to get it made only to see it fail. But he got it done. Now it enjoys a new shelflife on the midnight movie circuit, Rifftrax release, and now an impressive 4K Ultra HD Blu-ray from Vinegar Syndrome.

This 4K release allows this film to thrive with an often terrific HDR10 transfer and clean DTS-HD MA 2.0 audio. You score the film in 1080p and pick up a terrific collection of bonus features including the film’s pre-release cut Escape From Miami. It’s a true crowd pleaser and fans of schlock exploitation martial arts flicks will have a blast. Highly Recommended.