Revenge is a dish best served with lethal martial arts training and more than a few bullets in Thriller: A Cruel Picture / They Call Her One Eye starring Christina Lindberg. Vinegar Syndrome brings both the original Swedish and edited American version of this exploitation classic to 4K Ultra HD Blu-ray in an exclusive 4-Disc set. The new HDR10 transfer is amazing for both versions of this gritty and raw tale of female vengeance. Both cuts are very different takes of the same story each with their own positives and drawbacks and really for ardent exploitation fans. Recommended

Madeline (Christina Lindberg) hasn’t exactly had an easy life. After being assaulted by her own grandfather, she’s spent the last fifteen years mute. While on her way to a treatment center, she’s casually picked up by the flashy and kindly Tony (Heinz Hopf). Only Tony isn’t the good samaritan he plays. After plying Madeline with booze, Tony gets her hooked on heroin. Fully addicted, he renames Madeline “Frigga” and forces her into his stable of prostitutes for his high-paying clientele. Forced into the sex trade, Frigga saves her money to take martial arts lessons, learn to shoot a gun, and drive a car. She bides her time, waiting for the right moment to unleash her silent rage in full bloody vengeance.

Thriller: A Cruel Picture, and by extension its heavily edited American counterpart They Call Her One Eye, is a difficult film to experience. It’s visceral, unflinching, and an often shocking entry in the rape/revenge sub-genre of exploitation films. Much like its counterparts, I Spit On Your Grave or Ms. 45, the entertainment value doesn’t come from the horror Christina Lindberg endures but from her methodology for exacting her own brand of revenge. And while the revenge elements are solid, the film itself is a bit uneven - to say the least.

For the original Swedish version, Thriller: A Cruel Picture suffers from a languid pace capped off with unnecessary hardcore footage slapped in for shock value. While a revenge movie doesn’t always need to move swiftly, this movie really does take its time to get to where it's going and that direction doesn’t always make sense. Then there’s the hardcore footage of body doubles spliced into relatively softcore scenes of Frigga’s client sessions. It’s jarring and completely unnecessary. The training footage is interesting enough and once Frigga begins her quest for revenge the pace picks up just in time to save the film. 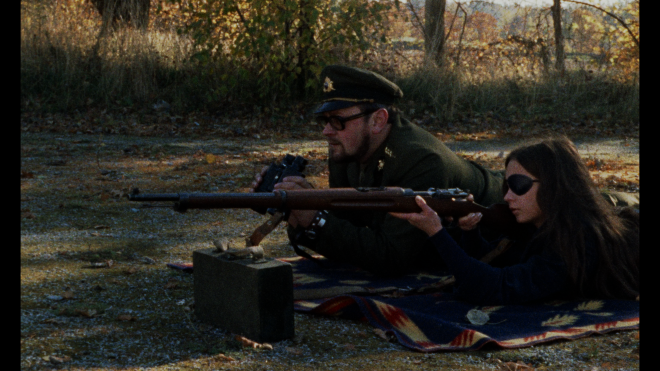 Now I may buck a lot of opinions but I actually prefer the American version They Call Her One Eye. Cut down to barely 90-minutes, it solves the pacing issues of the original version and removes all of the unnecessary hardcore scenes. It’s like watching the edited Caligula, you get a better sense of what the film is going for without filling it up with over-the-top distractions beyond what the premise already brings the show. But, this version is not without its own faults. In its maneuvering to quicken the pace, it accidentally pulls a lot of punch out of Frigga’s methods of revenge. The setup for the climax is a notable point where it’s just rushed into that shocking scene. It’s still very good, but I do wish API tapped the breaks a little for the final third of the film.

Such as either version stands, the film owes a lot to Christina Lindberg’s silent performance. Her eyes and range of expression sell every emotional arc of the film. It’s wild that she doesn’t speak a word but holds control of the entire film. Then you have Heinz Hopf and the diabolical Tony. I kinda enjoy that Tony is relatively a hands-off villain - save for that infamous scalpel scene! He has a way of flashing a menacing smile at all the most inappropriate moments to make him a duly unsettling presence. 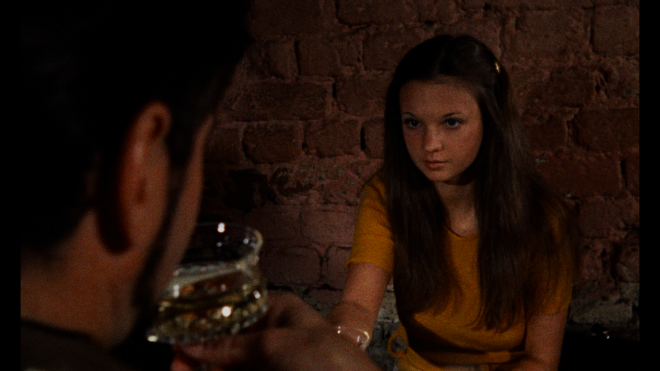 As far as exploitation rape/revenge flicks go, Thriller: A Cruel Picture / They Call Her One Eye isn’t the best or the worst of the pack. There’s a lot that works and there’s a lot that just doesn’t work for both cuts of the film. Writer/Director Bo Arne Vibenius had a smart concept befitting the genre and works his plot setups nicely. The drawback of his original version was all the unnecessary filler. And while the API version fixes some things it’s still a bumpy road to travel. If you’re a pure bread exploitation fan you should get a kick out of either cut of the film. But newcomers may want to pick something a little softer and easier to digest. 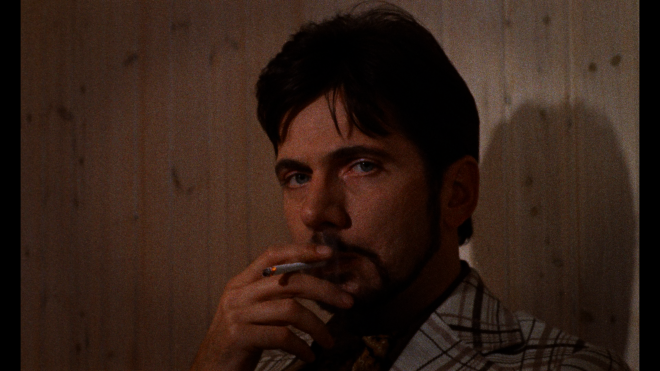 Vital Disc Stats: The 4K Ultra HD Blu-ray
Thriller: A Cruel Picture and They Call Her One Eye comes home to 4K Ultra HD Blu-ray in an exclusive four-disc 4K UHD + Blu-ray set from Vinegar Syndrome. Each version of the film is housed in a standard black case with an identical custom artwork slipcover. Reversible insert artwork depicts different versions of the original poster art. Each disc loads to an animated main menu with standard navigation options.

NOTE: This 4-Disc box set edition from Vinegar Syndrome has already sold out and is now out of print. The current slipcover 3-Disc release from Vinegar Syndrome features the original Swedish version Thriller: A Cruel Picture in 4K with They Call Her One Eye only coming in on a standard 1080p Blu-ray disc. 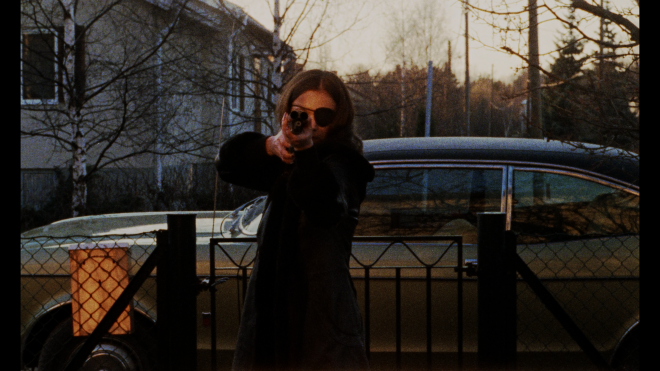 Reportedly sourced from a restoration of the original 16mm negative, this is another tremendous effort from Vinegar Syndrome on 4K. Given its 16mm origins, film grain is readily apparent but naturally cinematic and indicative of the source. With that, details are terrific throughout. Wide shots look pretty good, but middle and close-ups offer the most appreciation for facial features and textures. I haven’t seen this film since VHS and this is clearly a huge leap in overall quality. The image is also remarkably clean with only some slight mild speckling here and there. 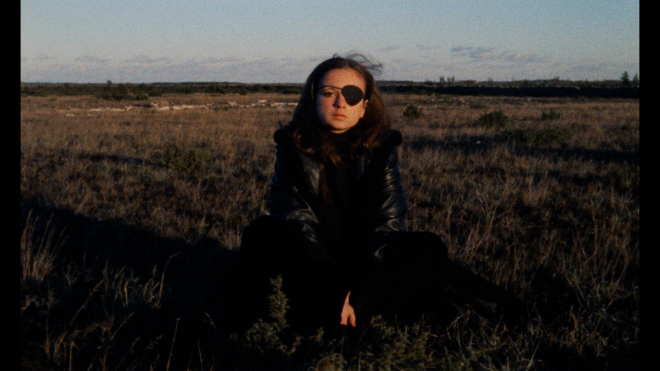 HDR10 really does a number with the film’s range of colors. Blues, Yellows, and Reds all shine beautifully. Flesh tones - and there’s plenty of time to examine those - are healthy and normal. There are a couple of moments where characters can look a tad too red/pink, but those are relatively few. Whites are natural and crisp without blooming - Frigga’s Karate gi is a notable example there. Black levels are overall strong with enough separation to avoid crush when Frigga goes on her revenge spree. There is a slow-mo fight between Frigga and a pair of cops where her black outfit almost completely blends into the background. The numerous slow-mo shots also have some additional flicker but that’s pretty normal considering the film stock. As a whole, an impressive restoration effort that doesn’t betray the film’s rough nature and gritty origins. 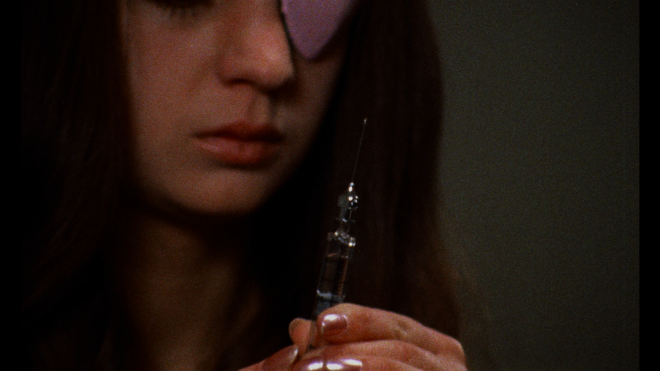 Thriller: A Cruel Picture arrives with a DTS-HD MA 2.0 Swedish and DTS-HD MA 2.0 English Dub track, while They Call Her One Eye enjoys a DTS-HD MA 2.0 English Dub. Effectively all of the tracks are great. Whether you want to listent to the original version with English subs or substitute for the dubbed version, the tracks work. The film has relatively little dialog. Long stretches are essentially silent with only sound effects and the synth-heavy score to keep the soundscape working. The score is a little different for They Call Her One Eye some sequences its the same, but for stretches that see the most cuts and trims the new music cues at least sound similar without completely changing the overall tone of the film. No notable age-related issues are to be found, each track is free of any notable hiss, pops, or cracks for a clean and clear track for each version of the film. 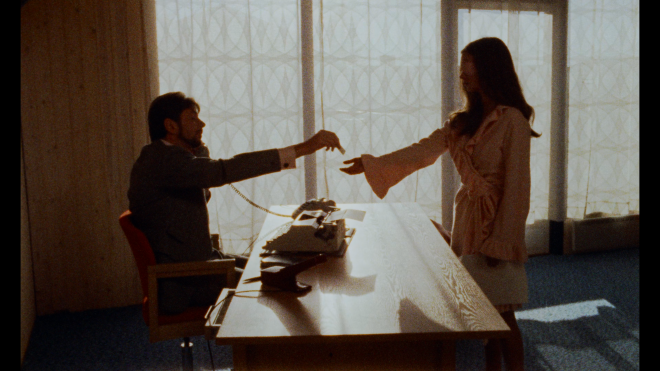 Keeping with their reputation for restoring lost wonders, Vinegar Syndrome has assembled a pretty terrific assortment of bonus features for both Thriller: A Cruel Picture and They Call Her One Eye. Between vintage promo materials and new/recent interviews, fans have a lot of great material to pick through for both versions of the film.

They Call Her One Eye 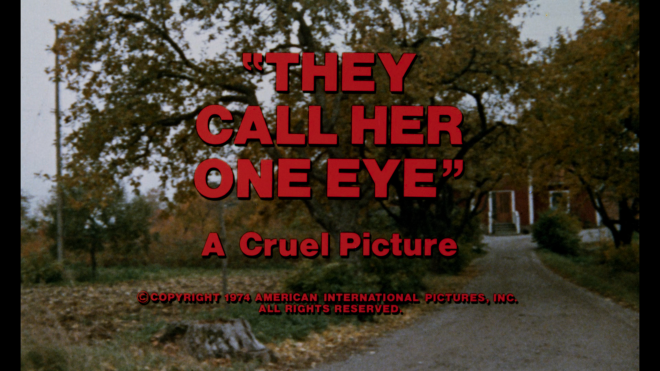 Thriller: A Cruel Picture and by extension the shorter but no less shocking They Call Her One Eye is not an easy film. Even for exploitation fans, it can be a test. However, if you can make it to the final act, Christina Lindberg delivers a suitably brutal brand of vengeance. Now Vinegar Syndrome delivers two versions of this cult classic to 4K Ultra HD Blu-ray with terrific results. The HDR10 transfer is another magnificent 16mm restoration with both Swedish and English audio options on top of hours of excellent bonus features. This four-disc box set is unfortunately out of print, but if you can find it at an affordable price it’s a solid value if you’re a fan. Because it has both versions in 4K, I'm giving it an extra half-star on the final rating. Recommended - specifically for fans of the genre.