The heat is back on with the hilarious action-packed Tony Scott-directed follow-up - Beverly Hills Cop II. More action, more humor, the film can feel like its coasting at times but Eddie Murphy and his cohorts are in prime form for this excellent highly entertaining sequel. After the excellent remastered trilogy release, Paramount delivers a truly barebones 4K Ultra HD Blu-ray release offering a stunning Dolby Vision transfer with the same excellent DTS-HD MA 5.1 track but sans any and all bonus features. Highly Recommended

“Yo man, we gotta talk, seriously. Who do you think you are, Clint Eastwood? Dirty Rosewood?”

A string of high-profile robberies has struck the Beverly Hills area. The perpetrators leave behind confusing clues stalling out the police investigation. When Bogomil (Ronny Cox) gets too close, the perpetrators gun him down. Now Detroit Detective Axel Foley (Eddie Murphy) must head back to Beverly Hills to help Rosewood (Judge Reinhold) and Taggart (John Ashton) crack the case before an arms dealer (Jürgen Prochnow) and a deadly blonde woman (Brigitte Nielsen) can pull off a massive multi-million dollar heist. 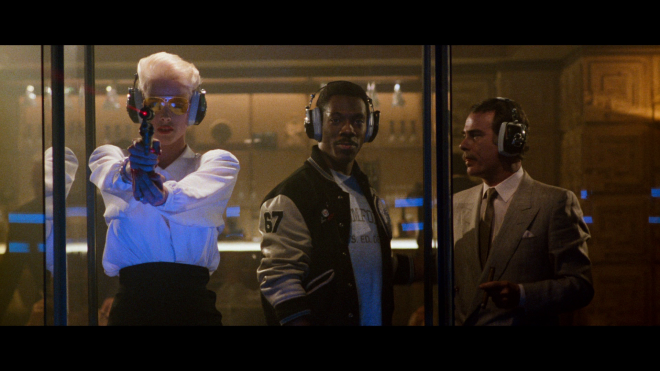 If the audience loves something give it to them again. When it comes to sequels sometimes less is more but in the case of Beverly Hills Cop II, more is more. After the 1984 original proved to be a massive hit catapulting Eddie Murphy to the top of the box office charts - Paramount was 100% behind the comedy hit man. Murphy produced and helped cook up the story with a team of writers and action maestro Tony Scott was hired on to direct after the Tom Cruise hit Top Gun. What you get is a push and pull of new action-packed energy trying to figure out what to do with a rehash of a lot of the same gags and bits that made the first film so funny.

While not as strong as the first film, I’m a big fan of Beverly Hills Cop II. Tony Scott was really coming into his own defining his signature action filmmaking style. Watching the opening bullet-riddled heist you can see all of the characteristics of future Scott-helmed action movies from the frenetic editing and slow-mo shots with tight tense framing set against a killer score. Where Tony Scott doesn’t quite work for this film is the humor. Compared to the rest of the film, whenever Murphy’s Axel Foley is doing a bit, it’s pretty flat and boring looking and just kinda lumbers along. 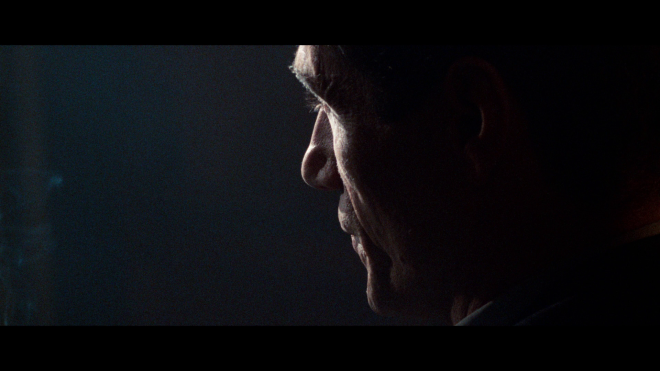 The scene where Foley is sneaking into the gun club with "noise-seeking bullets" is a prime example of this sequel trying to manage humor and its slick new action visual style. It’s kinda funny but pretty quickly you wish the scene would just end. And when it does finally end, suddenly the visual panache and the lighting and production design of the upscale club kick in. I’ve never been to a gun club that didn’t believe in bright clear lights and had smoke machines running, but you know, this place looks like a damn cool joint to pop off a few rounds in...with a bar in the back. Because you know what goes well with guns? Two fingers of Glenlivet.

Thankfully this sequel works more than it fails. Murphy is in prime form once again and when he’s sharing the screen with Reinhold and Ashton it’s a hoot. The funniest bits are when these three actors get to play off one another - that dating game theme song scene still makes me crack up. Jürgen Prochnow and Brigitte Nielsen are terrific villains. I may not fully understand why their evil scheme is so convoluted and elaborate, but I will say it’s nice to see Prochnow and Dean Stockwell (RIP) getting along after the events of Dune.

At the end of the day, Beverly Hills Cop II isn’t as good as the first film, but it’s still damned entertaining. I like to run the two as close together as I can. It’s damned hard not to watch part two after watching the first one. That said, it’s incredibly easy to not watch part three after watching the first two. With a fourth film still apparently in active development, we’re in for more Axel Foley action which I’m okay with. If there’s a way they can find a fitting conclusion for the franchise after that pretty rough third outing, I’m all for it.

Vital Disc Stats: The 4K Ultra HD Blu-ray
Paramount Home Video continues the upgrade of their recent trilogy set delivering Beverly Hills Cop II to 4K Utlra HD Blu-ray in a single disc 4K UHD + Digital set. No 1080p disc is included. The disc is housed in a standard sturdy case with an identical slipcover. The disc loads to a static image with a basic menu bar at the bottom.

Note: All images are sourced from the 2020 Remastered Blu-ray - when we can, we’ll update this review with 4K-sourced images and possible video clip. 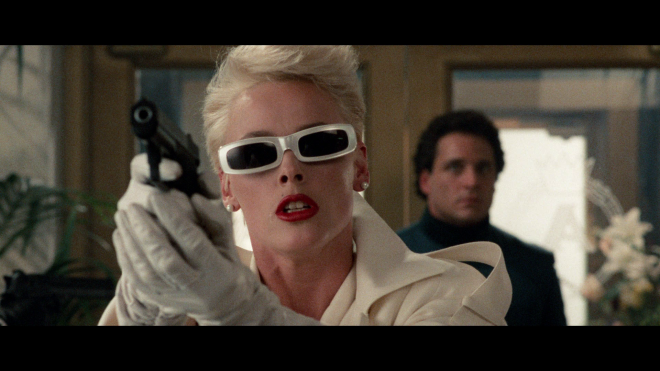 After being available on digital streaming platforms for quite some time, Paramount finally brings Beverly Hills Cop II to proper 4K Ultra HD Blu-ray with an often stunning Dolby Vision (and HDR10) transfer. The remastered 1080p Blu-ray from two years ago was pretty damned impressive, but this disc takes everything that worked so well for that release and just dials it up. Details are clean and clear allowing you to soak in that vivid Tony Scott style in all its glory. Closeups and middle shots expose plenty of fine textures and clean lines. Scott loved his closeups in this one so there are plenty of opportunities to look at every nook and cranny of any given cast member’s face. Individual stitching and patterns in the over-the-top 80s fashion stylings are all on display. Throughout the run, film grain is natural and cinematic without looking scrubbed or overly noisy - at least for a Tony Scott film.

The Dolby Vision application is judicious improving and enhancing the dynamic lighting featured throughout the film with lovely black levels and bright crisp whites. Primaries are in pitch-perfect form with bright vivid natural reds and blues with splashes of bright clean yellows. Skin tones are healthy and natural without being pushed too hot or too red. Again, this transfer just takes everything that worked so well for that 2020 Blu-ray and makes it even better for a genuinely beautiful disc. 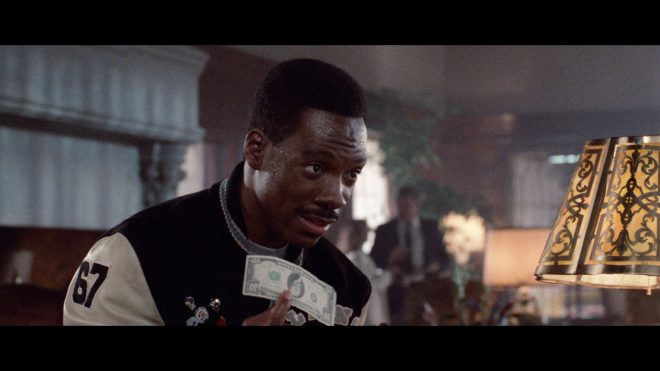 When the remastered Blu-ray hit back in 2020, Paramount worked up a fantastic DTS-HD MA 5.1 track that was the cream of the crop in that set - and it’s still a beast here. While some may bemoan the absence of an Atmos or DTS:X mix, I’m not going to complain because this track is excellent. Dialog is clean and clear throughout. There’s a near-constant surround presence. Gunshots and the slick pulsing bass notes of Harold Faltermeyer’s score punch the LFE values nicely. Slipping on my setup's DTS Neural:X function really punched things up adding more space and dimension to the track - so if you can do that, go for it! Levels are spot on without issue. 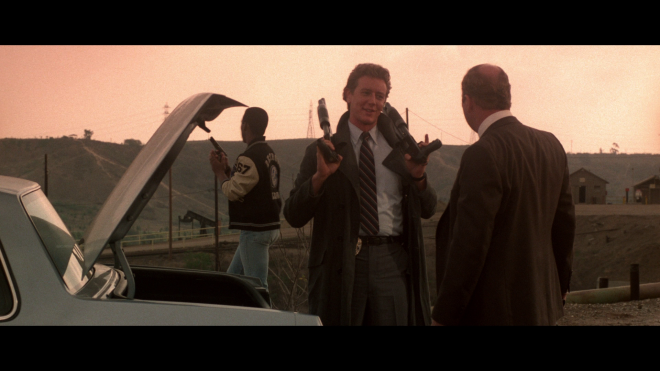 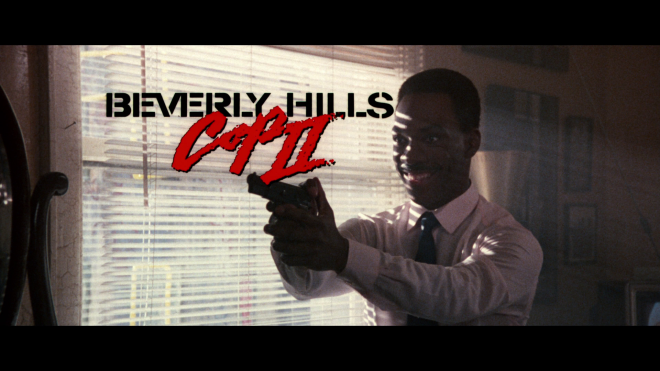 Beverly Hills Cop II isn’t as strong a film as the first, but it’s still a very good sequel. It doesn’t manage the gritty cop thriller and comedy elements as well as the first film, but director Tony Scott brings his own brand of visceral action-packed filmmaking to the show. Murphy is terrific and when he’s given time with Reinhold and Ashton the character dynamics and charm that made the first film work so well come roaring back. After delivering a terrific remastered Blu-ray in 2020, Paramount Home Video upgrades Beverly Hills Cop II to 4K Ultra HD Blu-ray with an often gorgeous Dolby Vision 2160p transfer. They used the same excellent DTS-HD MA 5.1 mix again - so no complaint there. My only gripe is the notable lack of any new bonus features making this truly a stripped-down barebones movie-only disc. If you’ve been waiting to upgrade, this is something to aim for.