Even if you're a fan of the 1947 original, you'll appreciate, enjoy, and be dazzled by writer-director Guillermo del Toro's captivating adaptation of Nightmare Alley. The Best Picture nominee delivers on a multitude of levels - riveting story, inspired direction, top-notch performances, eye-popping cinematography, and impeccable production design - and Paramount's spectacular 4K UHD rendering with HDR maximizes the impact of every element. Five-star video and a highly immersive Dolby Atmos track thrust us into all the dark, violent themes that pervade this fascinating and artistic neo-noir. Recommended.

Remakes have always been a dicey business and often inspire spirited debate among movie fans. Steven Spielberg's reimagining of West Side Story is the latest example of a controversial remake, but unless you're a diehard devotee of Hollywood's Golden Age, you might not realize another of 2021's Best Picture Oscar nominees is also a redo of a decades-old motion picture. Unlike the original West Side Story, Nightmare Alley bombed at the box office when it premiered way back in 1947, but the devilishly good film noir about a devilishly handsome, fraudulent psychic who swindles the naive elite developed a rabid cult following as the years ticked by. Though writer-director Guillermo del Toro's hypnotic remake got the same lukewarm reception upon its release, I wouldn't be at all surprised if it, too, finds a faithful fan base in the future.

Visually stunning from start to finish, Nightmare Alley is a psychedelic odyssey into the depths of a tortured, twisted soul, and for the director of such dream-like films as Pan's Labyrinth and The Shape of Water, it's a perfect fit. I'm a huge fan of the original Nightmare Alley, so was more than a little leery of this remake, but aside from running about a half hour too long (a common malaise among today's movies), del Toro's Nightmare Alley completely won me over. Every element of this engrossing neo-noir is executed to perfection - the Oscar-nominated production design and cinematography definitely deserved to win their respective categories - making it not only a worthy successor to the original but also an admirable, stand-alone cinematic achievement.

Just as Spielberg strove to present a more authentic West Side Story that would viscerally connect with contemporary audiences, del Toro is free of the censorship constraints that diluted or excised Nightmare Alley's racier, more violent, and more disturbing components in 1947. Del Toro claims his version is not a remake per se, but rather a fresh adaptation of William Lindsay Gresham's novel, and after viewing the film, I wholeheartedly agree. Though I miss specific parts of the original, del Toro's ability to depict episodes that were verboten 75 years ago lends the tale both an invigorating vitality and a greater feel of devastation and despair. 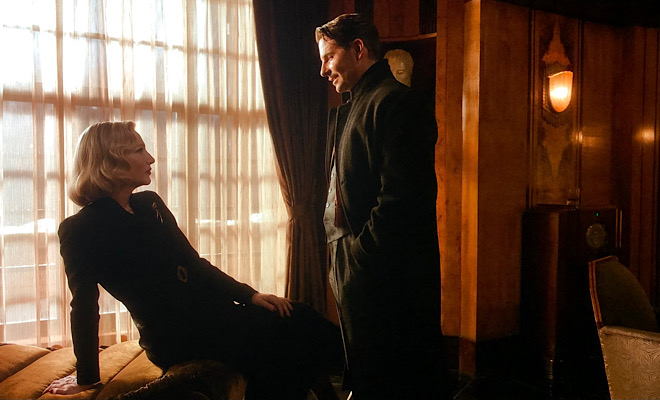 A grim, dense film noir in the vein of novelists Raymond Chandler and Dashiell Hammett, Nightmare Alley chronicles the exploits of Stan Carlisle (Bradley Cooper), a destitute man with a dark secret who seeks solace at a traveling carnival in the late 1930s. "Folks here, they don't make no never mind who you are or what you did," says carnival manager Clem Hoatley (Willem Dafoe) as he welcomes Stan to the family. Before long, Stan gets involved with a mentalist act run by Madame Zeena (Toni Collette) and her alcoholic husband Pete (David Strathairn). He soon becomes their trusted assistant, and after Pete dies under mysterious circumstances, Zeena gives Stan the prized playbook they used to deceive their gullible patrons.

Stan takes the book and runs with it, developing his own successful mentalist act with his carny cohort and girlfriend, Molly Cahill (Rooney Mara). As Stanton the Great, he becomes the toast of Chicago, preying on the vulnerable rich who pay him thousands to contact and conjure their dear, departed relatives and lovers. Savvy psychologist Lilith Ritter (Cate Blanchett) gets wise to his game and manipulates the seemingly invincible Stan into a nefarious partnership that threatens to lead the unscrupulous charlatan to his doom. 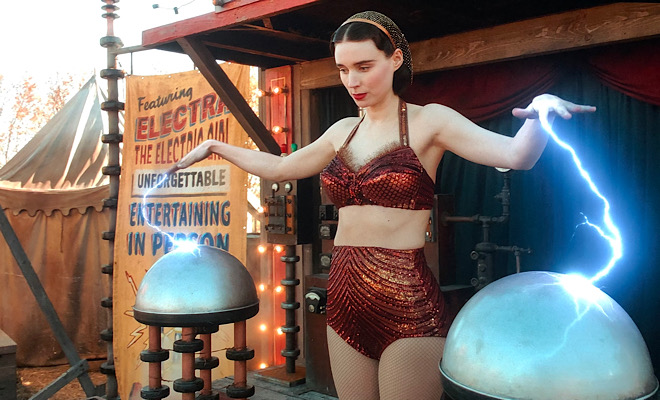 Nightmare Alley examines greed, ego, and the lasting effects of abuse, but at its core it's just a damn good film noir. Style definitely trumps substance, as del Toro brilliantly evokes the look and feel of Golden Age moviemaking. He shoots Nightmare Alley like a 1940s film with contemporary accents and modern flourishes rather than vice-versa, and that's why it works. This isn't one of those flashy, flimsy neo-noirs that exaggerate, caricature and cheapen the genre's signature elements. Nightmare Alley is the real deal and comes closer to recapturing the tone, flavor, and artistry of classic noir and honoring its conventions and components than any film since Curtis Hanson's L.A. Confidential.

Color is often anathema to noir, but del Toro manages to paint his noir canvas with bold hues without sacrificing atmosphere or impact. Darkness predominates, but the period 1940s setting and lush palette that occasionally resembles Technicolor transport us to another world. Like he's done so often and so well, del Toro thrusts us into a dream - or in this case, a nightmare - and holds us in its strangulating grip until he chooses to let us go. Sometimes he holds us too long. Like many movies today, Nightmare Alley occasionally feels bloated. I like the slow-burn approach and delving deeper into character, but several scenes drag on too long and milk the mood too preciously. Just a bit of judicious tightening would have made the film more tense and thrilling. The original runs 111 minutes; the remake adds 39 minutes to the narrative, some of which are essential, but a good 20 minutes could have been trimmed without harming the finished product. 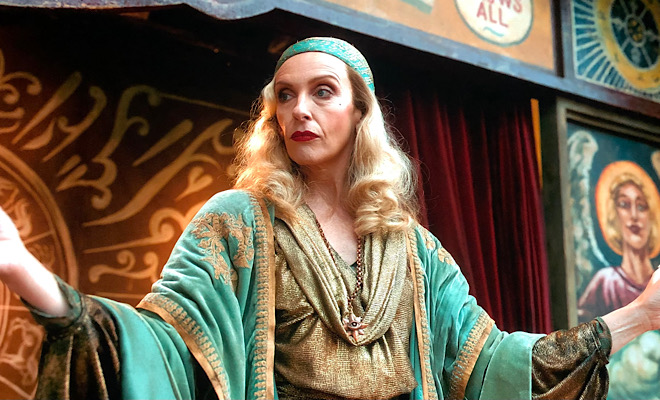 The stellar cast also includes Richard Jenkins, Ron Perlman, and Mary Steenburgen, all of whom file terrific performances. Though Cooper is too old to play Stan, who should be in his late-20s or early-30s - not his mid-40s (Tyrone Power was 32 when he tackled the part) - he's a riveting presence and embodies the role. Collette brings an earthy sensuality to Zeena (though I prefer Joan Blondell's portrayal in the original), Strathairn nails the drunken, disheveled Pete, and Dafoe crafts a colorful turn as the often wild-eyed Clem. Mara is rather bland and lacks the wide-eyed naïveté to properly pull off Molly, and though Blanchett is always interesting to watch and creates crackling chemistry with Cooper, she over-underplays here, crafting an overly stylized femme fatale who occasionally strains credulity.

Despite a few faults, Nightmare Alley is a feast for the senses and worthy successor to the classic original. Deftly juxtaposing the dirt, grime, and misfit nature of carnival life against Chicago's posh nightclubs and the opulent trappings of the rarefied rich, del Toro takes us on a phantasmagoric journey filled with violence, manipulations, and betrayals, and populated by a fascinating array of grotesques. Rarely can a remake rival its predecessor, but this one does, and it's so gorgeous you won't be able to take your eyes off of it. 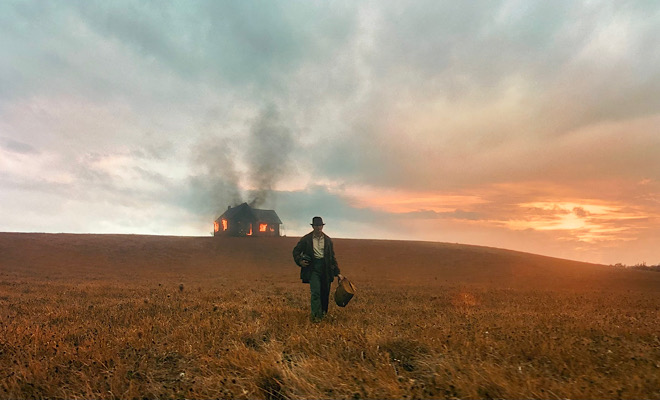 Vital Disc Stats: The 4K Ultra HD Blu-ray
The 2021 version of Nightmare Alley arrives on 4K UHD packaged in a standard case inside a sleeve. A leaflet with the Movies Anywhere digital code and 1080p Blu-ray disc are tucked inside the front cover. Video codec is 2160p/HEVC H.265 and audio is Dolby Atmos. Once the disc is inserted into the player, the static menu with music immediately pops up; no previews or promos precede it.

Nightmare Alley is a visually arresting film, and the breathtaking 2160p/HEVC H.265 transfer with HDR10 celebrates the artistry of cinematographer Dan Laustsen, who received a well-deserved Oscar nomination for his stunning work. He and Del Toro masterfully recreate the look of Golden Age movies without abandoning contemporary conventions, and the splendor of HDR showcases their impeccable craftsmanship. (One can only wonder how great the film would look in Dolby Vision.)

Razor sharp yet incredibly film-like, the consistently dazzling image boasts excellent contrast, superior shadow delineation, and a wide spectrum of brilliant color, all of which keep us transfixed throughout the 150-minute running time. Much of Nightmare Alley takes place - appropriately - either at night or in dark, murky interiors, but the picture is always beautifully defined. (The few scenes that transpire during bright sunlight are almost blinding in their intensity.) Gold tones predominate in Lilith's wood-trimmed office, emitting a warm glow, while a stark coldness pervades the carnival scenes, accentuating the grit, grime, and garishness. 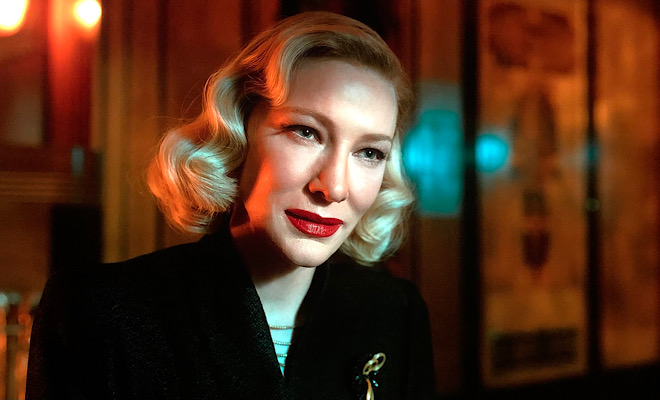 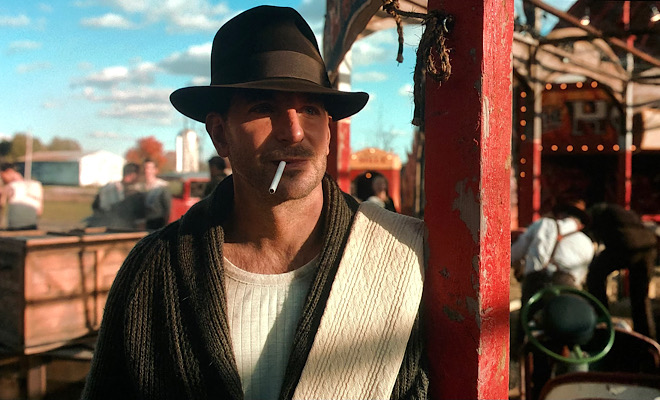 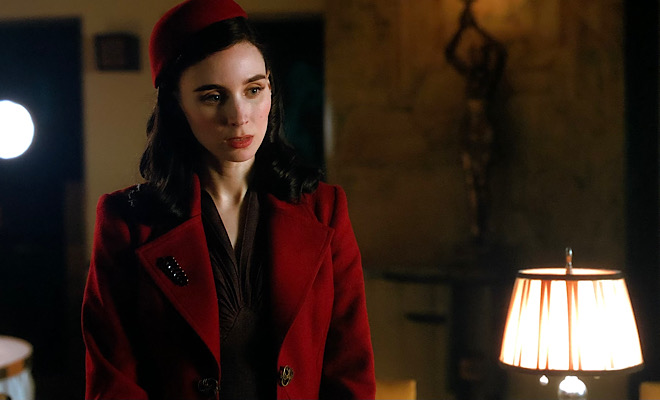 Inky blacks frame the image much of the time, whites are crisp (spotlights and angled shafts of light are employed to marvelous effect), and the bold reds of Molly's outfits and Lilith's glossy lipstick make potent statements. Various shades of green and blue, orange flames, and dark red blood are all lush and vibrant as well. Costume textures, falling snow, and noir accents like steam and swirling cigarette smoke are distinct, close-ups are sublime, and all the décor of the carnival and posh interiors - no matter how minuscule - is easy to discern.

Nightmare Alley is a glorious dream in 4K UHD and HDR, and the disc is worth purchasing for the video transfer alone.

I wasn't expecting much from the Dolby Atmos track, but boy, does it deliver! From the opening scene that depicts a massive house fire right through to the very end, this immersive mix impresses more with its subtle nuances than its bombast. Del Toro masterfully uses sound to draw us into his murky world, constantly teasing us with delicate elements that force us to prick up our ears. The faint sounds of clanking coins, lit cigarettes, footsteps in the mud, gently squeaking brakes, crackling flames, wisps of winds, and chirping crickets all make distinct impressions, while ambient crowd noise, rumbling thunder, and rain (which really takes advantage of the overhead Atmos speakers) enhance the foreboding atmosphere.

Active surrounds add occasional emphasis and especially come into play when the music starts to swell. Excellent stereo separation across the front channels widens the soundscape, and an expansive dynamic scale embraces the understated yet potent score by Nathan Johnson and handles all of its highs and lows without any distortion. Sonic accents like gunfire, fisticuffs, revving car engines, and shattering glass are crisp, and all the dialogue is clear and easy to comprehend. This is a beautifully constructed and modulated track that heightens the impact of Nightmare Alley in a multitude of ways and will delight both audiophiles and casual listeners.

A trio of featurettes, all of which are housed on the 1080p Blu-ray disc, comprises the supplements.

Engrossing, stylish, seductive, and brimming with director Guillermo del Toro's inimitable brand of artistry, the 2021 version of Nightmare Alley stokes the senses as it searingly explores the dark depths of the human soul. The accomplished cast embodies the grotesque characters in this seedy, violent tale of greed and grifting, but it's the hypnotic visuals that are the real star of this elegant yet disturbing film. A dynamite HDR transfer and beautifully nuanced Atmos audio immerse us in this immoral underworld that comes closer to recapturing the essence of classic film noir than any other movie of the 21st century. Recommended.