Matthew Vaughn’s wild and crazy franchise of England’s most elusive spy agency continues with The King’s Man. This prequel brings the series to the roots of the agency during World War One. Even with terrific energetic performances from its cast - especially Ralph Fiennes - the film’s erratic tone and pace hamper Vaughn's best efforts as an action director and pulp storyteller. 20th Century Studios via Disney have delivered a damned impressive 4K Ultra HD Blu-ray release sporting an upscaled HDR10 transfer and an engaging Atmos audio mix with a solid assortment of worthwhile bonus features. If you’re a fan of the Kingsman franchise, you should get a kick out of this. If you’re new to the series, you don’t need to see the other installments but tread lightly, it’s not for everyone. Recommended

The reign of Victoria is at an end. England’s grip as the world’s superpower is loosening. Now a cabal of shadowy figures including Mata Hari (Valerie Pachner), Erik Jan Hanussen (Daniel Brühl), and  Grigori Rasputin (Rhys Ifans) aims to bring the cousins and world leaders, King George of England (Tom Hollander), Kaiser Wilhelm of Germany (Tom Hollander), and Tsar Nicholas of Russia (Tom Hollander) to war. With millions of lives at stake and time running out, The Duke of Oxford, Orlando (Ralph Fiennes) with his son Conrad (Harris Dickinson) and their manservant Shola (Djimon Hounsou) and Polly (Gemma Arterton) will set about a scheme to end the Great War, save England, and the World. 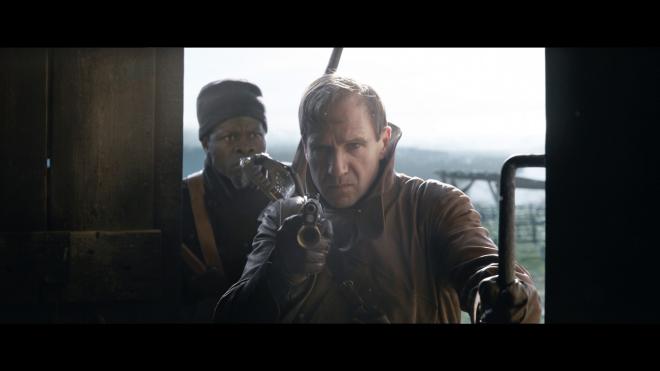 A prequel, The King’s Man serves not only as an origin story for The Kingsman and Kingsman: The Golden Circle but also as a soft reboot for the franchise. Taking the action back in time to the Great War removes the need to follow previously established events while introducing a whole host of new colorful characters. And by and large, the gamble pays off. Matthew Vaughn continues to showcase his knack for staging wild and thrilling action sequences, overly-elaborate plotting, and exciting characters brought to life with some exceptional casting.

All of the elements that work are great and contribute to an engaging entertaining action-packed thrill ride of a movie. The problem is the film’s structure and whiplash shift in tone. At over two hours, this film is easily twenty minutes too long with what feels like multiple films smashed into one. One minute you’re in the throes of a hilarious dance fight between Ralph Fiennes’ Oxford and Rhys Ifans’ Rasputin, the next we’re in the terrifying hellish pits of World War I and then we’re back to jaunty action shenanigans with a cliffside climax. 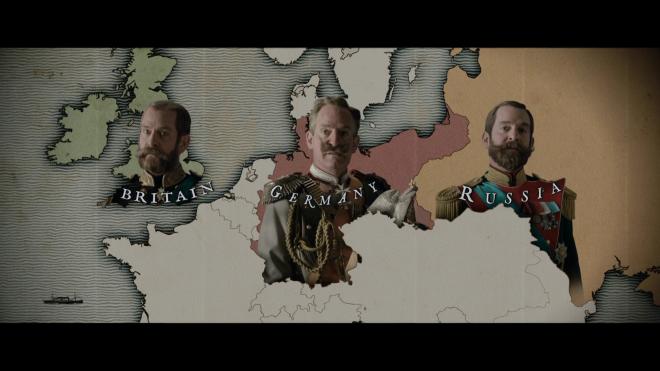 The clunky plotting and tone aside, I have to admit to being very entertained by The King’s Man. I loved the first film and what Mattew Vaughn brought to the table. The second film, Golden Circle, was a weird jumble of more of the same that left me just shrugging my shoulders. For me, it was entertaining, but also not memorable. I own it, but I haven’t watched it since the theater, so maybe I should give it another look, but I've never felt the want to. On the other hand, The King’s Man has many memorable sequences and is genuinely entertaining even if it tries to do too much. I've actually wanted to watch this multiple times in a week. The cast is great. Ralph Fiennes once again delivers the goods, this time as a true gentleman spy. Rhys Ifans’ Rasputin steals the film right down to an uncomfortably disgustingly funny example of his “healing” abilities. That silent knife fight scene in No Man’s Land was incredible stuff. So there’s a lot to love and appreciate here even if it’s not as great as it could have been with a tighter and leaner story.

Vital Disc Stats: The 4K Ultra HD Blu-ray
The King’s Man saves the day on 4K Ultra HD Blu-ray in a two-disc 4K UHD + Blu-ray + digital set from 20th Century Studios/Disney. Pressed on a BD-66 and a BD-50 disc, the discs are housed in a sturdy two-disc case with identical slipcover artwork. The disc loads to the standard Disney language selection menu before arriving at the traditional navigation menu. All bonus features are found on the 1080p Blu-ray disc. 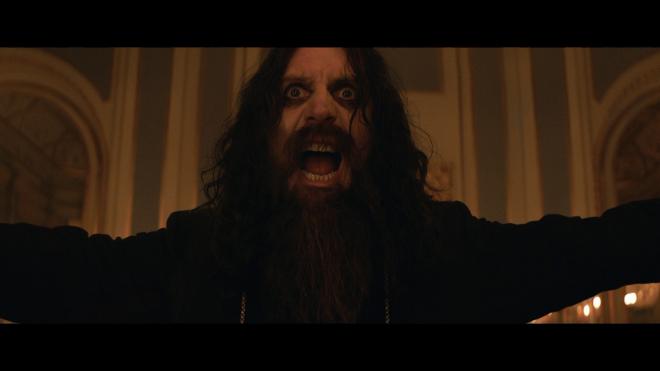 Sourced from a 2K Digital Intermediate, this upscaled HDR10 transfer still packs a visual punch. One thing I really enjoyed about this prequel was the change of setting and time period and how it opened up the series visually. There’s a lot of attention paid to small details in costuming, production design, and character makeup. For all of these aspects details are fantastic. Tom Hollander’s varying appearances as the three cousins is a fun little tidbit but each character has something distinct to let them stand out. Rhys Ifans’ Rasputin may lurk in the shadows quite a bit, but his makeup work is fantastic stuff. You may find yourself appreciating his beard more than you’d like to.

HDR10 works well for this outing. Colors run the gamut here with bold blues, yellows, and deep crimson reds. Whites are bright and crisp without blooming. Black levels are nice and inky with some great shadow separation. Scenes in the barn where the diabolical bad guys gather are low-lit but look terrific without losing depth or small details while avoiding any crush troubles. Likewise, the silent No Man’s Land fight sequence is a prime example of what this HDR10 grading has to offer. With that, some of the less than amazing CGI sequences do stick out. Namely any time a virtual background was used - it just looks off and draws attention to the fakery of it. But that’s a small gripe really when compared to the greater whole. 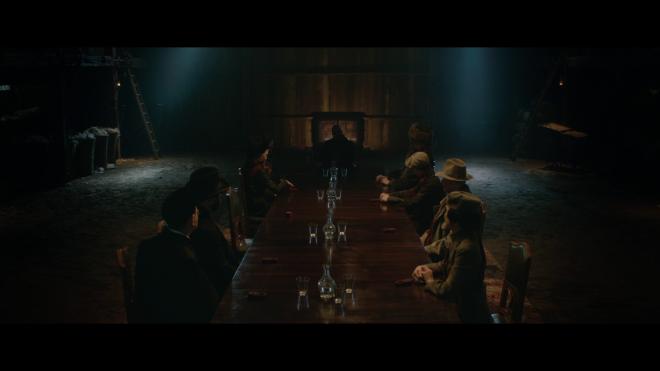 There must be some sort of separation between 20th Century Studios and Disney proper releases because this Atmos track packs the oomph and pizzaz you want to experience from a high-end audio format like this. My only complaint - and it’s a small one - was I felt like I had to pop the volume just a tad higher than normal. But that’s it. Dialog is clean and clear throughout without any issues. Scoring by Dominic Lewis and Matthew Margeson is active and engaging with some plucky plays on classical tunes of the era.

Imaging is top-notch through and through. From some of the quieter conversational moments inside the Kingsman tailor shop to the high-flying aerial hijinks opening the climactic final act, there’s great channel movement and pinpoint object placement. My favorite moments are the fight sequences, namely the Rasputin dance fight and then the No Man’s Land fight. I love these because they’re complete opposites. The Rasputin fight is loud, gregarious, and really out there with a lot of whizbang and then conversely the No Man’s Land fight is tight and deathly quiet but still finds ways to use all of the channels effectively. But then you have the final battle and that’s a lot of activity hitting front-center-left-right-rear and above - often all at the same time. Overheads get a lot of work for object-specific effects as well as letting some of the larger locations sounds and feel expansive. 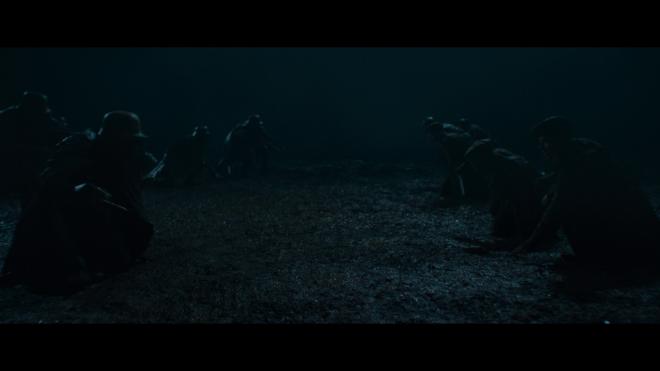 Again levels are where this track has a bit of an issue. It felt necessary to pop it up a few notches past my normal listening volume but that’s it. LFE gets some nice rumble in the subs. The WWI sequences especially with all of the explosions offer some nice concussive low tones. They may not match the power and hits of something like 1917 but then compared to other recent Disney Atmouse tracks this actually has some guts to it. 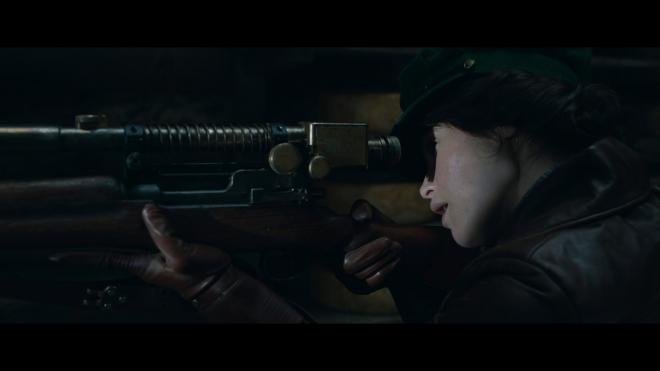 What this release lacks in quantity, it makes up for in quality. With over two hours' worth of extras, there’s never a dull moment in the lot. The Great Game Begins, comprising of six segments, is the real meat and potatoes of the extras giving a very detailed look behind the making of the film. The No Man’s Land breakdown is just a damn cool look at how they pulled off the sequence. Not really related to the film itself, but the Remembrance and Finding Purpose segment is a wonderfully heartfelt look at how wounded soldiers find solace with their service and the trauma of their injuries through training and sports competition. 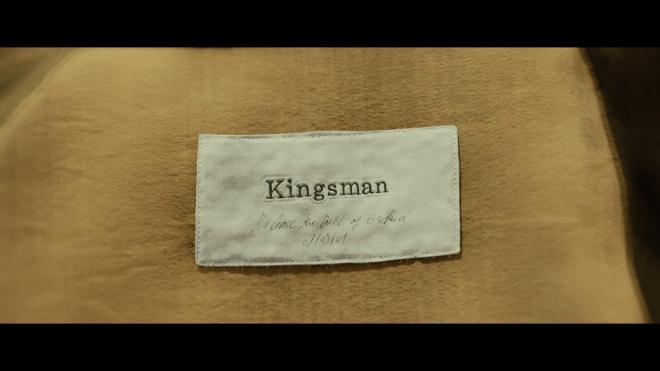 The King’s Man isn’t only the third entry in the high-octane spy franchise it also serves as a soft reboot. By taking the action to WWI, the film removes any need to reconnect with previously established characters allowing it to chart a new story path, and actually have some fun with itself. Tonally, it struggles and it might try to do too much, but then it could have done nothing and just rehashed the previous films. 20th Century Studios via Disney brings a pretty damned impressive 4K Ultra HD Blu-ray disc to the market. An upscaled transfer, the image boasts strong details with a solid HDR10 grading. The Atmos mix may not challenge the best of the best, but it isn’t the weak sauce tracks we’ve recently experienced from Disney of late. Cap it off with some genuinely great bonus features and you have a worthy new addition to the collection. Recommended.