The William Lustig/Larry Cohen collaboration Uncle Sam may not look like much, but it nonetheless offers some good laughter, littered with unintentional humor and a silly premise while its socially-aware subject matter makes for an easy, fun watch around the holiday. Celebrating its 25th Anniversary, the low-budget B-horror schlock wreaks true patriotism on 4K Ultra HD with a surprisingly excellent Dolby Vision HDR video, strong Dolby Atmos audio but the same supplements as previous home video releases. Nevertheless, the UHD package makes for a satisfying addition to the 4K library for fans of silly schlock and is Worth a Look.

As is sometimes the case, a limited budget ironically adds entertainment value to the outlandishly socially aware B-horror production Uncle Sam. From the imagination of Larry Cohen (Q: The Winged Serpent, God Told Me To, The Stuff, It's Alive, Black Caesar), this is a movie comfortable with embracing its preposterous and very farcical premise about a Fourth of July celebration turning into a massacre for not showing enough national pride. With not-so-subtle remarks on the justifications of war, William Lustig (Vigilante, Maniac Cop) brings life to this silly horror schlock with its tongue firmly pressed against its cheek. Like a class reunion of 70s cult memorabilia, the movie stars Robert Forster, William Smith, Bo Hopkins, P.J. Soles and Isaac Hayes playing their roles with such seriousness and sincerity that the 90 minutes almost seem to go by too fast. 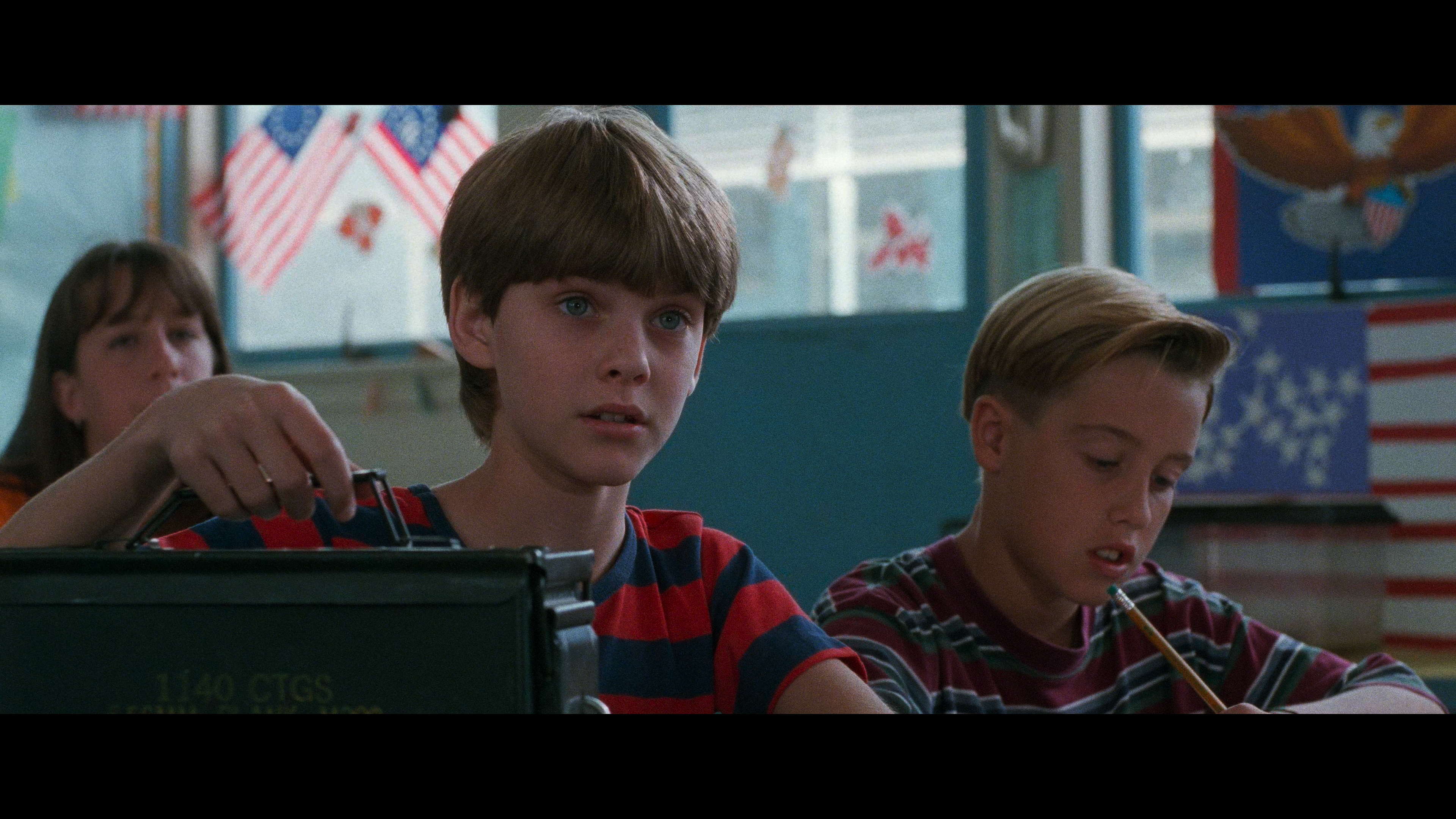 On paper, the idea of an undead soldier killing people in his hometown for being unpatriotic is pretty interesting and amusing. While the final product clearly feels the pains of its low-budget origins, the plot allows Lustig and Cohen to comment on the idea of patriotism itself. Everyone is equal in the eyes of this rotting war hero. Corrupt politicians are just as likely to meet their fate as those insolent teens disrespecting the flag and the national anthem. Then, there's Jed Crowley (Hayes) and Jody. Aside from ridding the town of walking corpses, they're both obvious nudges of the willingness to blindly follow orders. The movie's messaging, of course, doesn't really make this a particularly good flick, but the political atmosphere does add to its enjoyment. In the end, it's all in good fun, and as long as the viewer has a sense of humor to match the low-budget absurdity, Uncle Sam is also pretty darn funny to watch.

Vital Disc Stats: The Ultra HD Blu-ray
Celebrating its 25th Anniversary, Blue Underground resurrects William Lustig's Uncle Sam to Ultra HD as a two-disc combo pack. The Region Free, dual-layered UHD66 disc is housed inside a clear keepcase with a lenticular slipcover and reversible cover art. At startup, viewers are taken straight to the main menu selection with full-motion clips in the top left corner and music playing in the background. 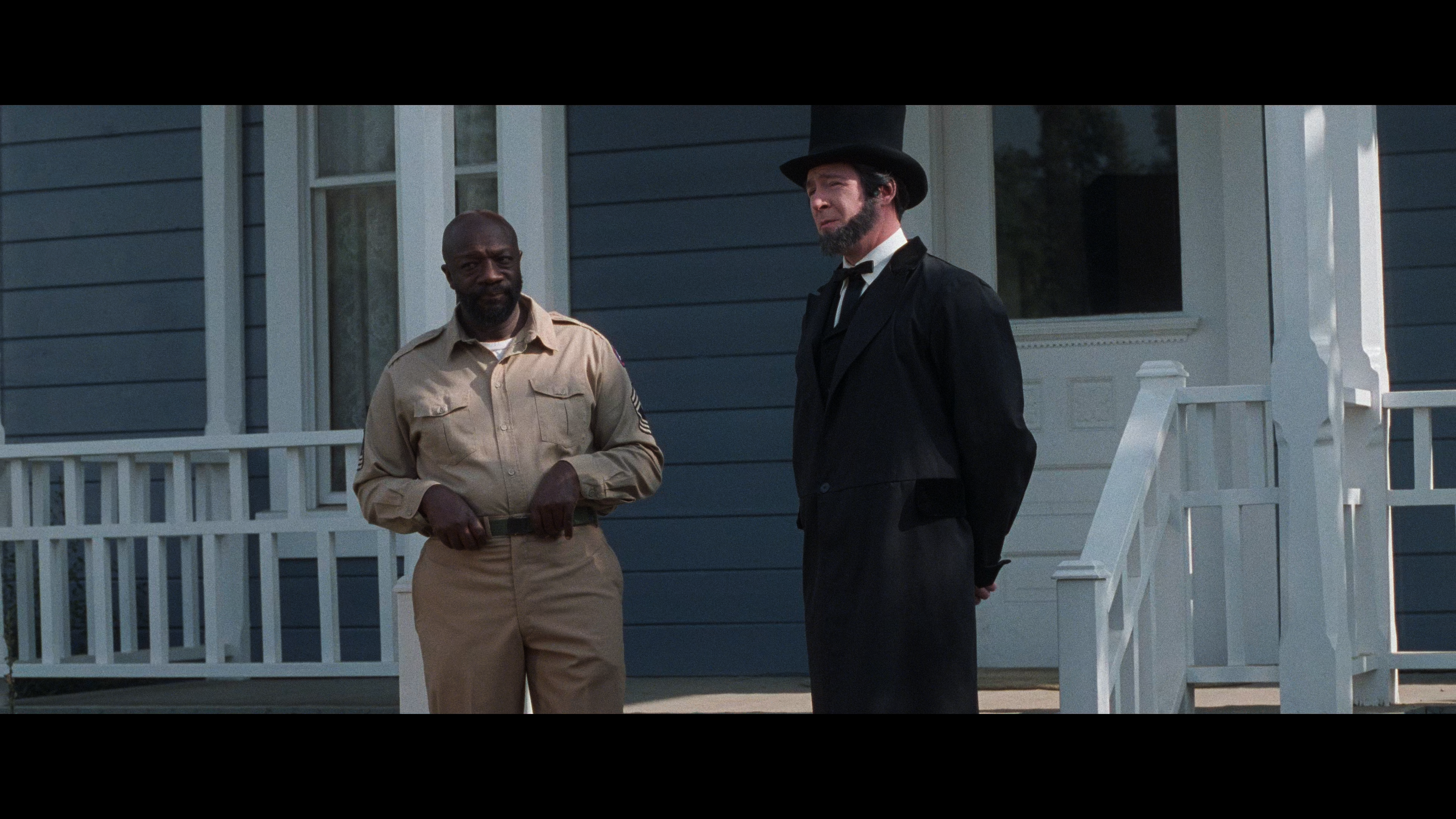 Patriotic zombies punish the unpatriotic residents of 4K Ultra HD with a shockingly good and top-notch HEVC H.265 encode that was struck from a new restoration and remaster of the original 35mm camera negatives. The native 4K transfer comes with significantly sharper definition and clarity, exposing every nook and cranny of Jody's home and the quaint architectural design of the idyllic town. The smallest objects decorating the background and every leaf in the surrounding foliage is distinct, and the fine details in the stitching of Uncle Sam's costume are striking. Of course, given its low-budget history, the video suffers a tad from that familiar direct-to-video look that makes the visuals somewhat bland. However, the source is nonetheless in excellent shape with a more refined grain structure, furnishing the photography with a more attractive film-like quality than its Blu-ray predecessor.

Presented in its original 2.35:1 aspect ratio, another notable improvement where the BD was lacking is the enhanced contrast, supplying the cinematography with cleaner, more vivid whites while crisp, tighter specular highlights allow for better visibility in the hottest spots, such as sunlight beaming through windows or the narrower bloom from light fixtures. The Dolby Vision HDR presentation also yields a considerably richer color palette with a sumptuous array of primaries, making the horror flick all the more animated and spirited. At the same time, secondary hues are equally more vibrant and dynamic, from a lively selection of browns and tans to plucky, warmer yellows and bold, fiery oranges while highly-revealing facial complexions appear healthy and natural. Black levels are inkier with better gradational differences in the various shades and stronger delineation within the darkest shadows. (Dolby Vision HDR Video Rating: 82/100) 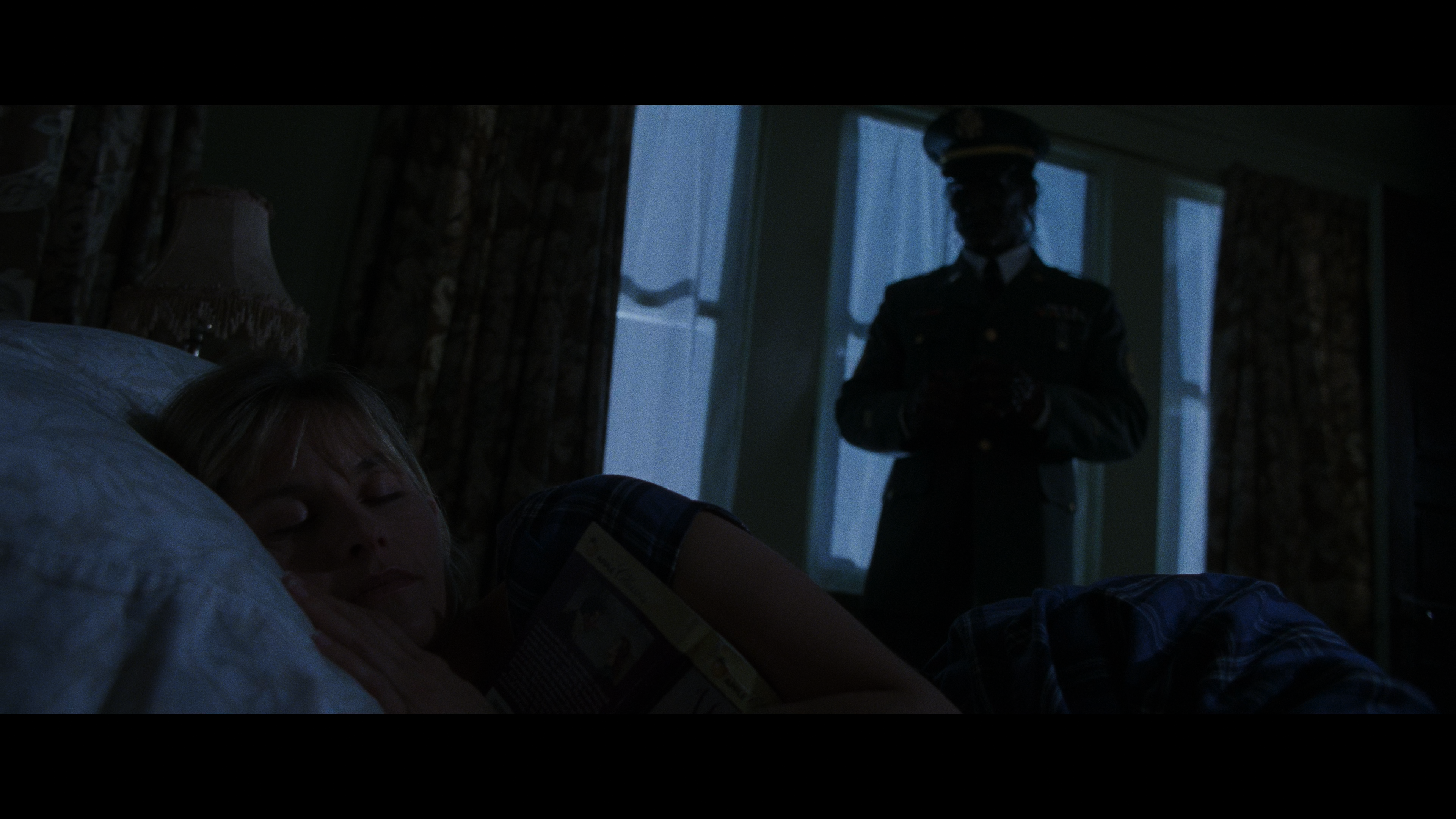 The B-horror schlock has never had a good history on home audio, no matter the format, as was the case when it was released on Blu-ray twelve years ago. The same can still be said with this Dolby Atmos soundtrack delivering a notable improvement over its DTS-HD MA predecessor, but the design fails to be truly impressive or even seem capable of generating a worthwhile soundscape. Of course, this may be largely due to the production's low-budget history and whatever limitations are inherent to the original source.

However, that is not to say it doesn't come with a few surprises and memorable moments, as there is some unexpected activity in the rears and overheads from time to time though never consistent enough to create an immersive experience. A few of those discrete effects can unfortunately feel artificial and easily localized. The front soundstage makes better use of object-based format with atmospherics bleeding into the top heights while maintaining distinct, clear vocals in the center. Channel separation is also a bit more appealing with better balance across the fronts, exhibiting good acoustical details and more appreciable fidelity generally, but overall imaging is not particularly dynamic, feeling mostly limited and uniform. Regardless, the low-end is shockingly hearty and effective for those few scenes of action at the end.

On the whole, the 3D audio mix doesn't offer many surprises or provide a memorable soundscape, but this schlock-fest is nonetheless an upgrade from its DTS-HD counterpart and is the better of the two. (Dolby Atmos Audio Rating: 74/100) 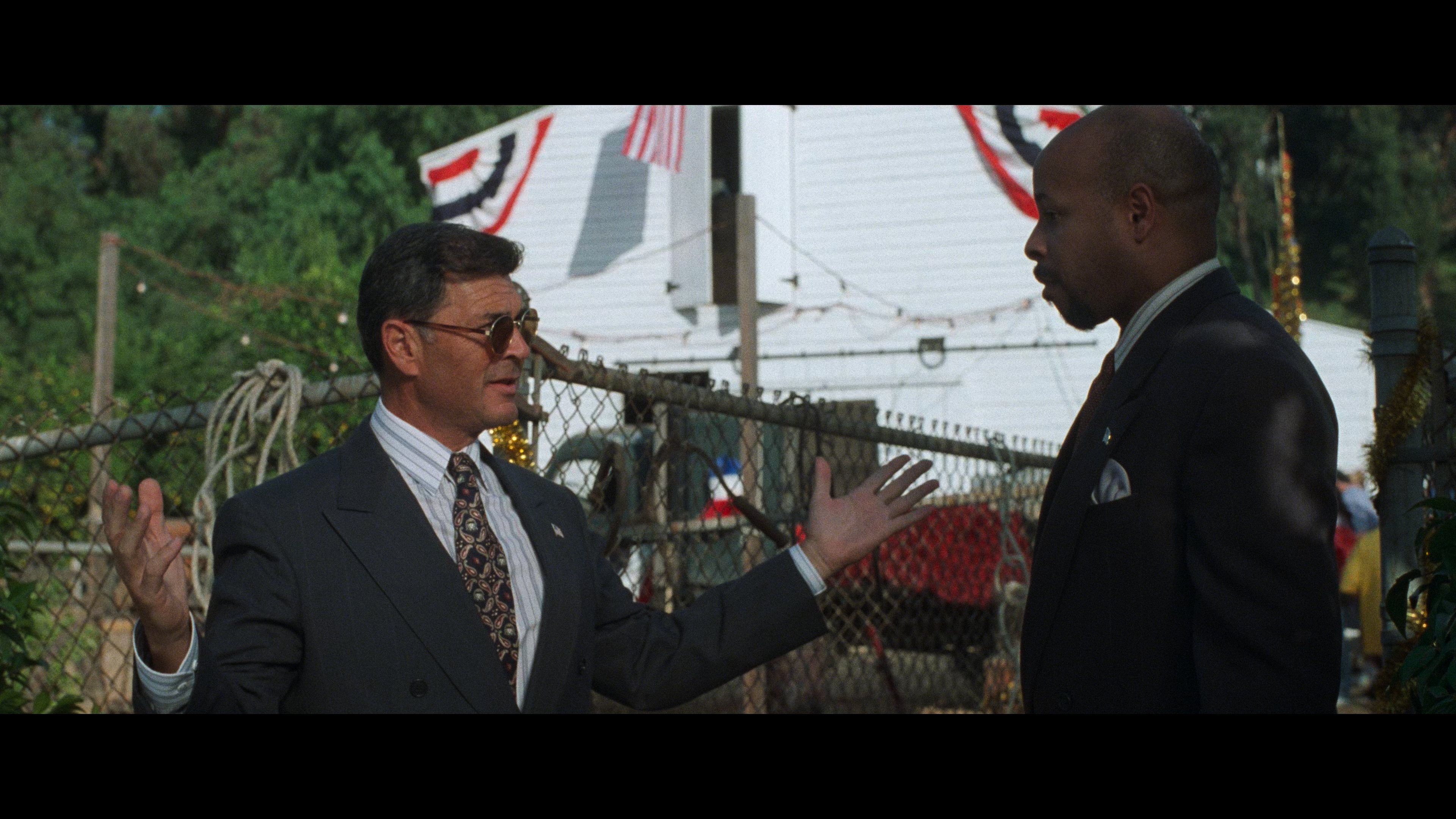 The same collection of bonus material is ported over for this UHD edition. 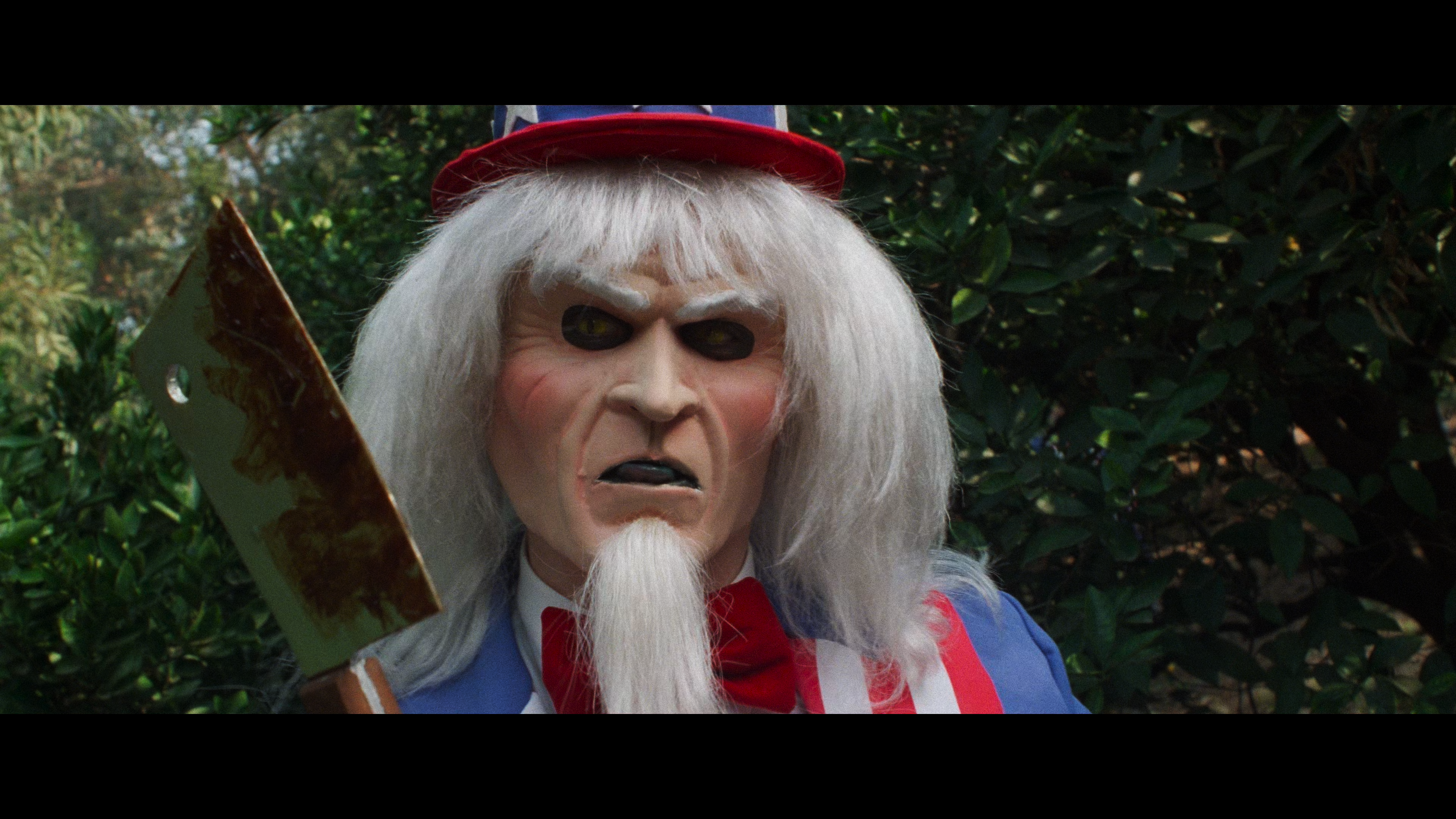 Full of unintentional humor and a silly premise, Uncle Sam comes in to wreak true patriotism on draft dodgers, crooked politicians and flag burners. This William Lustig/Larry Cohen collaboration may not look like much, but it offers some good laughs while its socially-aware subject matter makes for an easy watch on a lazy afternoon or some good fun around the holiday. Blue Underground celebrates the movie's 25th Anniversary on 4K Ultra HD with a surprisingly excellent Dolby Vision HDR presentation, delivering a significant improvement over its Blu-ray counterpart. The Dolby Atmos soundtrack may not be as equally impressive, but the object-based mix is nonetheless a welcomed step-up from its DTS-HD predecessor. Supplements are the same as previous home video releases, but overall, the UHD package is satisfactory considering its origins. This one is definitely for the fans of low-budget schlock and worth a look.