Director William Lustig and producer/writer Larry Cohen return for Maniac Cop 2, a surprisingly entertaining horror actioner that exceeds budget limitations with an engaging plot that manages to build some amusing suspense. The cult horror actioner terrorizes the streets of Ultra HD brandishing a shockingly gorgeous 4K video remaster, a highly satisfying Dolby Atmos track but the same collection of supplements as the Blu-ray. Nevertheless, the overall UHD package is sure to please fans and comes Recommended.

In Maniac Cop, we last saw Officer Matthew Cordell (the strikingly chin-chiseled Robert Z'Dar) reach out from beneath the pier after he'd been impaled as he plunged a police van into the Hudson River. For this sequel to the 1988 cult favorite, Z'Dar sadly is not given the opportunity to display his uniquely impressive facial features, looking a bit more zombified or at least, suffering from some serious decomposition damage by the murky, polluted waters. But whatever the case may be, Cordell is now a horribly disfigured monster turning the series from a mystery-type actioner to a more straightforward horror-action thriller. He's also more irked and determined than ever to avenge his name, ruin the reputation of New York's finest, and hunt down those responsible for sending him to Sing Sing.

However, for the sake of the storyline, Cordell must first tie up a couple of loose ends from the first movie, or to be more precise, the reanimated corpse cop pays a visit to officers Jack Forrest (Bruce Campbell) and Theresa Mallory (Laurene Landon), funnily serving as our MacGuffins in the vein of Janet Leigh. But the story doesn't really come into its own until the tough and hardened Det. Lt. Sean McKinney (a fantastic Robert Davi) partners with police psychologist Susan Riley (Claudia Christian). To complicate matters, a subplot involving serial killer Steve Turkell (an awesome and grotesquely whimsical Leo Rossi) is introduced where he by weird coincidence befriends the brutish Cordell so that they can wreak greater chaos.

As absolutely silly and bonkers as it sounds — and it truly is — it is all done purely for justifying even sillier, more bonkers action sequences that amazingly add to the movie's overall enjoyment. Director William Lustig and producer/writer Larry Cohen return for this follow-up and deliver a motion picture rarity. Maniac Cop 2 is as good, and possibly better, as its predecessor, with heightened action and suspense, making it one of the more fun and pleasurable B-exploitation actioners of the late 80s. 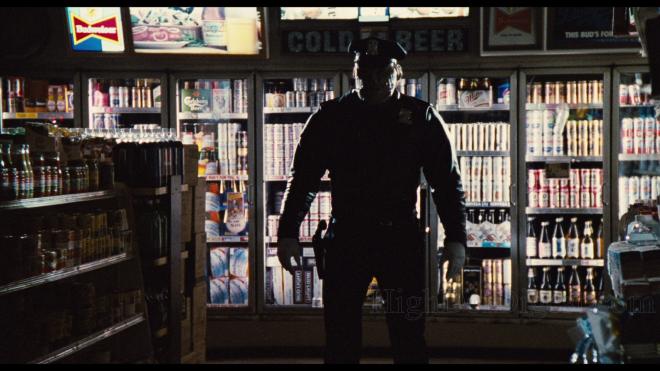 Vital Disc Stats: The Ultra HD Blu-ray
Blue Underground unleashes William Lustig's Maniac Cop 2 to Ultra HD as a two-disc combo pack. The duel-layered UHD66 disc sits comfortably opposite the panel holding a Region Free, BD50 copy of the movie, and both discs are housed inside the standard black keepcase with a glossy, lightly-embossed slipcover. At startup, viewers are taken straight to the main menu selection with full-motion clips in the top left corner and music playing in the background.

The cult horror actioner terrorizes the streets of Ultra HD, which has been brought back from the dead by restoring and remastering the original 35mm camera negatives under the supervision of cinematographer James Lemmo. Brandishing a surprisingly gorgeous HEVC H.265 encode, the native 4K transfer has its share of soft, blurry moments, which is to be expected given its low-budget production. There are also a few minor instances of the sharpest edges wavering and flickering like moiré fringes. However, the overall picture is quite sharp and highly detailed with clean, distinct lines in the costumes, buildings and city streets. The improved contrast balance also allows for better visibility in the distance, especially in a few daylight demo-worthy exteriors while showering the actions in vivid, radiant whites. Specular highlights add a realistic sparkle and sheen to metallic surfaces, make the watery streets glisten in the light and supply the brightest, hottest spots a tight, luminous glow without engulfing the finer aspects.

Most impressively, the Dolby Vision HDR presentation bathes the visuals in vibrant, spirited primaries, from the lush varied selection of reds to the electrifying blues and lively greens of the surrounding foliage. Secondary hues are also more varied and animated with the earthy browns and yellows receiving the most noticeable boost while the fiery oranges of explosions and fire add a more full-bodied, dynamic intensity to the action. Facial complexions appear healthier with a more natural rosy peachiness in the skin tones and lifelike textures that reveal the tiniest blemish and pore. All the while, brightness levels bathe the nighttime sequences in rich, true blacks while shadows details are notably stronger with a better clarity within the darkest corners of the frames. Awash in a fine layer of grain, the 1.85:1 image has a lovely film-like appeal, making this the best the movie has ever looked. (Dolby Vision HDR Video Rating: 88/100)

Cordell also breaks into home theaters equipped with a shockingly good and highly satisfying Dolby Atmos soundtrack, giving fans an awesome step-up from its average-sounding DTS-HD counterpart. In fact, compared to that lossless track, this object-based option does a better job at delivering various atmospheric effects at a reasonable decibel and in various areas of the room. From the chirping of birds in the distance to the endless hustle-and-bustle commotion of the city all around, the listener is constantly surrounded by a hemispheric soundfield of noise that's surprisingly immersive for a thirty-year-plus movie. Admittedly, there are few times when the surrounds and heights can feel somewhat loud and a tad aggressive, to the point of being mildly distracting, but all in all, the sound engineers did a phenomenal job upmixing the original design.

Likewise, imaging feels broader and more spacious with the top heights adding a welcomed layer of ambiance, as the background activity smoothly and convincingly pans across the entire half-dome soundstage. The mid-range exhibits plenty of warmth and discrete detailing throughout, providing the loudest segments with improved clarity and appreciable separation while dialogue reproduction remains clean and precise at all times. The low-end still has a bit of overtly booming effect in couple spots, but it's largely a negligible complaint since the rest of the runtime comes with good, clean bass that adds complementary weight and presence to the action. (Dolby Atmos Audio Rating: 90/100)

For this UHD edition, Blue Underground ports over the same set of supplements as before, and they are all available on the accompanying Blu-ray disc.

Picking up after the events of the first movie, Maniac Cop 2 is a surprisingly entertaining horror actioner that's equally as good as, if not better than, its predecessor. Director William Lustig and producer/writer Larry Cohen return for a sequel that exceeds budget limitations, delivers an engaging plot and manages to build some amusing suspense. The cult horror actioner terrorizes the streets of 4K Ultra HD brandishing a shockingly gorgeous Dolby Vision HDR remaster of the original elements and a highly satisfying Dolby Atmos soundtrack, giving fans an awesome upgrade over its Blu-ray counterpart. Porting over the same collection of supplements as that Blu-ray, the overall UHD package is sure to please fans and comes recommended.