Not every movie needs a sequel. And then not every sequel is actually a sequel and instead trades in on the namesake of a popular classic. That’s the pickle we find ourselves in with An American Werewolf in Paris. A genuine 90s guilty pleasure, the film doesn’t stand up against London but on its own is a campy entertaining show. Turbine Media Group brings Anthony Waller’s lycanthrope flick to 4K Ultra HD Blu-ray as a two-disc Mediabook (with three variations to choose from) offering an excellent Dolby Vision HDR presentation, solid audio, and a nice collection of bonus features to pick through. Not for everyone, but if you're down to clown - Recommended

Best pal Americans in Paris Andy (Tom Everett Scott), Brad (Vince Vieluf), and Chris (Phil Buckman) are in town to see the sights, ladies, and perform some daring-do life-threatening bungee jumps! Setting up for the ultimate jump from the iconic Eiffel tower, the buds see Serafine (Julie Delpy) leap from the balcony and Andy executes the perfect mid-air rescue saving the beautiful woman! As Andy desperately tries to get to know Serafine, the three friends are exposed to an underground cult of werewolves who love to feed on the flesh and blood of the numerous tourists coming to Paris to have a good time.

Alright, so I know this isn’t a great movie. It’s got issues, but it’s a guilty pleasure through and through. The principal problem with An American Werewolf in Paris is that it is called "An American Werewolf in Paris." For years numerous sequel attempts were made - even involving John Landis at a couple of points - to recapture the darkly comedic magic of 1981’s An American Werewolf in London. Somewhere down the line, this project just got out of hand. It went from being a small little dark comedy terror flick to becoming a bigger more expensive action-packed horror show with more razzle-dazzle CGI effects than it could convincingly pull off. I believe if Waller and company hadn’t worked so damn hard to connect it to London and relied more on practical effects, this might have made it out of the gate on better footing.

Admittedly, a big part of why I enjoy this movie is it was the first time I actually paid money to see an R-rated movie in the theater without having to buy a ticket for something else and sneak in. My local mall multiplex was the perfect combination of lazy and indifferent. I proudly walked into that theater as a barely fifteen-year-old after handing over my hard-earned $4.50 without being carded. I freely admit it’s that experience that colors my feelings towards this movie, and again, I admit it’s not amazing, but after not seeing it for the longer end of twenty years, I found it to be a fun 90s time capsule. 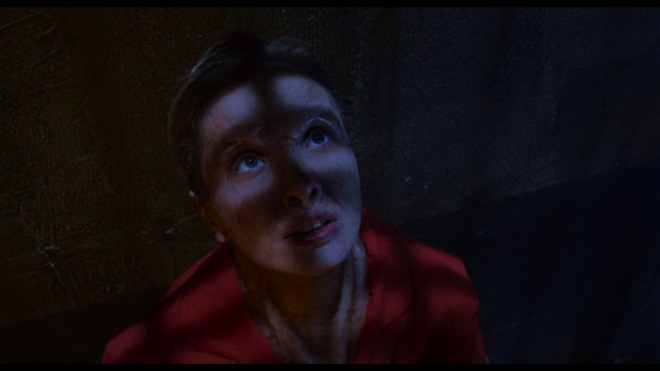 When the film works it’s pretty good. Julie Delpy is the best aspect of the film. She’s so serious throughout that it often feels like she’s acting in a completely different film. Normally that’d be a bad thing but with everything and nearly everyone else playing things as a goofball romp, she helps ground it. Tom Everett Scott plays up the semi-clueless everyman nicely. He was in peak “next big thing” mode hot off the success of That Thing You Do and just before the damn funny Dead Man on Campus. Phil Buckman and Vince Vieluf are your typical dopey werewolf fodder, existing for a laugh or two but ultimately aren’t long for this world. I also like that werewolves aren’t an incidental isolated happening.

Secret society flicks tend to have a fun edge to them and it worked well as a backdrop for Blade just a year later. The problem for An American Werewolf in Paris is it just doesn’t know when to be funny or when to play things as straight horror, often trying to do both at the same time with mixed results. Thankfully the latter half of the film works far better than the overly-silly front end. It’s that last forty-odd-some minutes where the film comes together and writer/director Anthony Waller finds the right energetic balance. Watching the film at such a high resolution and clarity, the differences between the practical effects and makeup shots and the full-bodied CGI is telling. Less would have given this film a whole lot more. 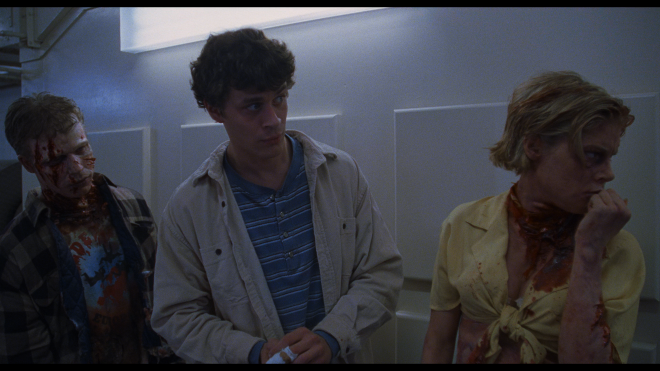 An American Werewolf in Paris howls away at a pretty damn impressive 2160p Dolby Vision (and HDR10) 1.85:1 transfer. This film was modestly budgeted for its era but was working with a number of special effects techniques including classic film matting, CGI, and practical makeup effects. As such, depending on the scene and technique in question, the image quality can fluctuate a little. When there are practical makeup effects on screen, the image is impeccably sharp and clear with fantastic details. When there’s a lot of CGI - namely the bungee jumping scenes or some of the full-body werewolf shots, softness creeps in pulling back the overall quality. Without completely redoing the effects, there’s no real way to get around the softness.

For the bulk of the film’s runtime, it looks great. Daylight sequences are beautiful showcasing the Parisian scenery, architecture, and all of the dated 90s fashions. I’d forgotten about those years where clothes didn’t fit anyone so this transfer almost works as a sort of highly-detailed visual guide of what not to do with your wardrobe! Film grain is naturally cinematic and well-rendered throughout without issues. Source elements are in great shape. 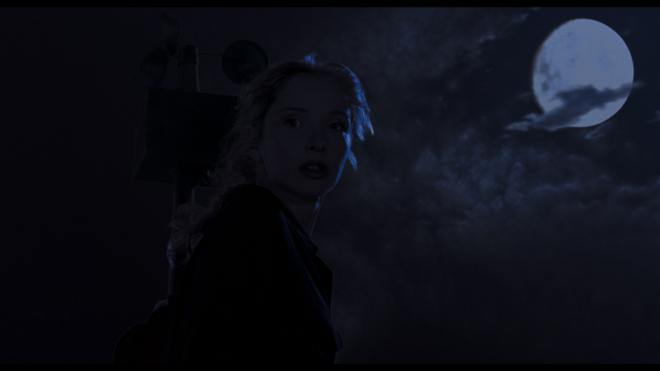 The Dolby Vision HDR grading is solid. Colors are bold and lifelike without looking blasted or oversaturated. Reds, Blues, and Yellows get plenty of playtime throughout. Whites are beautifully crisp without blooming issues. Black levels are well resolved most of the time, leaning into that deep inky shade we want to see. The underground werewolf club or the “hospital” with the werewolf tied to the bed and tubes in the caverns are great examples of how good this film can look with low light situations. Heavy CGI sequences - again that first bungee jump, and some of the bigger werewolf shots, are a bit rough and stand out against the practical real-world elements. That’s not something that can be fixed, it's just much more noticeable at such a high resolution. 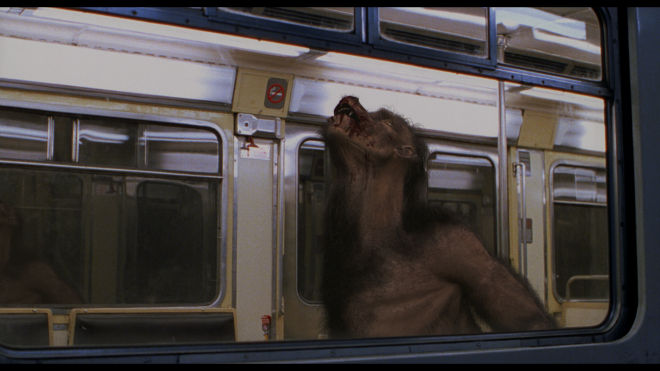 This release comes with DTS-HD MA 5.1 and 2.0 audio options. Be aware, the German audio options are default so you’ll have to change to English in the main menu. The good news is you can’t do wrong with either the 5.1 or 2.0 audio options. Both are very good with clean dialog, scoring, and sound effects activity. However, if I’m going to pick one, I’m going to roll with the 5.1 track. With all of the creature sound effects, the Wilbert Hirsch score, and 90s pop songs populating the soundscape, the 5.1 track just gives the show more room to breathe. When the big werewolf club transforms and all hell breaks loose, it’s a highlight moment.

Even during quiet moments like when Andy is waking up at the hospital or later at the cafe, there are enough ambient effects working to keep channel activity working. There are still some stretches that still feel a bit more front/center focused, but not for long stretches. Throughout dialog is clean and clear without issue. Scoring is active and engaging, and those pop tunes of the era get plenty of playtime. Wolf howls get appropriate attention and there’s some nicely engaging rumble in the subs. All in all, both tracks are great and you can’t go wrong with either one. 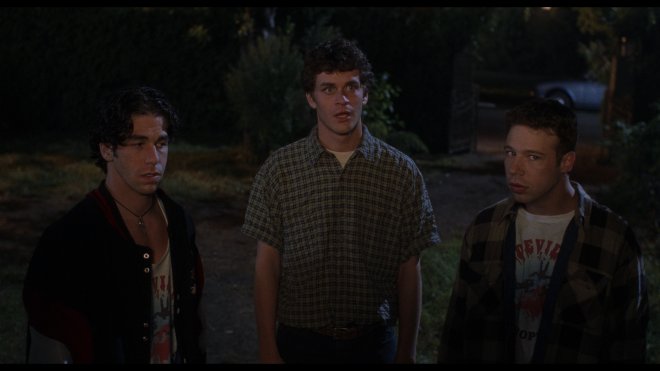 The bulk of the bonus features are on the 1080p Blu-ray disc, which is Region Free so no worries there. The coolest bonus feature and it’s only on the 1080p disc is the audio commentary with Antony Waller - which is sort of half pre-recorded and half picture-in-picture scene-specific. It’s very informative about how/where certain scenes were shot and different aspects of the editing process to get to the final cut. The next cool thing is the workprint cut which doesn’t dramatically change the film, there’s a handful of alternate takes but the big stand-out is the alternate ending which I kinda like better than the theatrical ending we got. Everything else is archival EPK and the original Making-Of feature documentary - which I don’t think ever came to DVD here in the states. 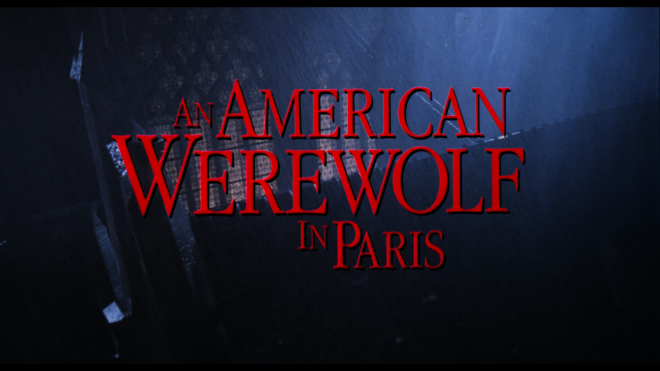 Yeah, this one isn’t for everyone. But for 90s nostalgia fans or folks that get a kick out of rough-around-the-edges sequels, An American Werewolf in Paris is a fun run. Not a great movie, but I was amazed that 25 years after that first theatrical outing it was still pretty entertaining. If it hadn’t worked so hard to trade in on the namesake of An American Werewolf in London, I have a hunch it would have been better received. On its own, it’s not a bad concept for a werewolf flick and it works better separated from the 1981 classic.

Turbine Media Group delivers lycanthrope addicts a pleasing 4K Ultra HD Blu-ray release with three Limited Edition Mediabooks to choose from. The film’s native 4K Dolby Vision transfer is impressive making sure this film looks better than ever, although not much can be done with the lesser unconvincing visual effects. Both audio tracks are great so it’s dealer’s choice there and the collection of bonus features is pretty fantastic including an engaging unique Audio Commentary from director Anthony Waller. If you enjoyed this movie years ago, it’s a great set. Recommended.