Sale Price 59.99
Buy Now
3rd Party 39.99
Temporarily out of stock. We are working hard to be back in stock. Place your order and we’ll email you when we have an estimated delivery date. You won’t be charged until the item ships.
Release Date: March 15th, 2022
Movie Release Year: 1981
MPAA Rating: Restricted
Release Country: United States
COLLAPSE INFO -

The 1981 John Landis classic horror/comedy An American Werewolf in London takes a bite out of 4K Ultra HD Blu-ray from Arrow Video. Landis keeps the humor and horror flowing with a great leading performance from David Naughton and iconic gore effects from Rick Baker. The Deluxe Limited Edition package is nearly identical to the Arrow Blu-ray release from 2019 albeit now in stunning 4K Ultra HD with a beautiful Dolby Vision transfer, great audio, and an impressive assortment of bonus features. If you haven’t imported this disc on 4K yet, it’s a great one to add to the collection. Highly Recommended

It’s difficult to talk about a classic that people hold near and dear to their hearts… or rotting corpses of the cursed undead. It’s especially difficult with a movie like An American Werewolf in London where it’s been released so many times now. We never got to cover the 2019 Blu-ray release, but between Turbine Media Group’s excellent 4K release, the 2016 Remaster that was flawed but pretty good, the 2009 Full Moon edition Blu-ray and the 2006 HD-DVD, we’ve covered this movie four times now. We’ve pretty much run out of anything new to say about this movie!

Our man M. Enois Duarte covered the German Import 4K release and he’s a major fan of the film so I’m going to let him speak to the nature of this hilarious horror show.

[Excerpt from our Turbine Media Import 4K Ultra HD Blu-ray Review]
"Ever since I was a kid and was able to enjoy John Landis's An American Werewolf in London, I always saw the film more as a comedy than a horror flick. Admittedly, it's not the sort of laugh-out-loud, gut-busting riot as the director's previous box-office hits, Animal House and The Blues Brothers. Still, to me, the cult classic remains a cleverly-crafted, darkly-comedic creature feature. Certainly, Landis placed a bit more emphasis on the scares and clearly had a blast terrifying his audience thanks to Rick Baker's amazing practical special effects, which still hold up marvelously well today, but a twisted sense of humor nonetheless lingers just below the shockingly horrifying visuals, albeit definitely understated and very subtle. 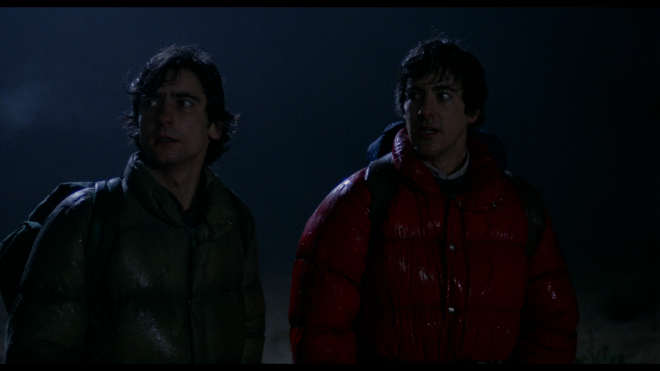 In either case, the plot of a young American fearful of becoming a monster doesn't quite fall in either category or even conform to the horror-comedy subgenre in the traditional sense. And as I see it, fear and humor seem to coexist within the same instinctual region of the human psyche. Laughing at what terrifies us is almost like a self-defense mechanism for maintaining sanity during anxiety-ridden and stressful situations. Perhaps, that is ultimately the film's true genius. Just shy of its 40th Anniversary, the film still resists being easily categorized, yet it is an equally hilarious and frightening piece of entertainment, making it, for some, the greatest werewolf movie ever made."

For myself, I have a hard time declaring the best werewolf movie. Growing up I had this film and The Howling with a few showings of Wolfen and Full Moon High to keep me company. I edge towards The Howling as the better film overall - but that’s my own personal bias and I have to admit that feeling tends to vacillate depending on my mood. Ask me in six months and I might tell you this is the better film. Even when I try to judge which movie has the better transformation sequence - I again tend to favor The Howling - but it’s because of Rick Baker and An American Werewolf in London that we now have a Best Makeup effects Oscar category so that carries a lot of weight. 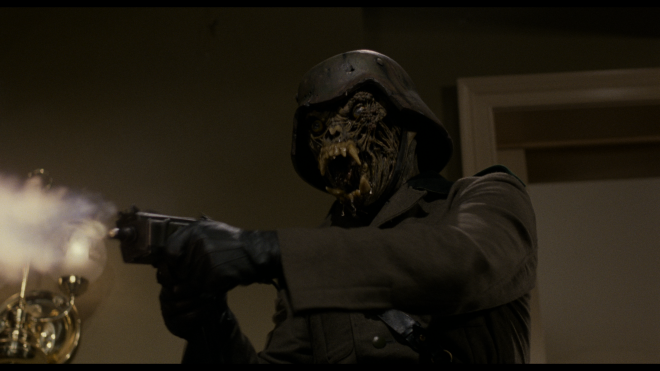 What I particularly love about An American Werewolf in London is how it takes a lot of the traditional werewolf curse elements and gives them a new spin. I especially like that we’re not inundated with the typical silver bullet stuff but instead, we get the cursed undead. I love the notion that this curse would eventually become intolerable to live with as you’re regularly visited by the trapped souls of the people you’ve killed. It’s played for some laughs here, but it’s a terrifying idea that no other werewolf flick ever really examined before. The only one since was the less than impressive but still oddly entertaining pseudo-sequel An American Werewolf in Paris.

While this film has its funny moments, it's certainly not all laughs. Even that previously mentioned transformation sequence is damned funny if you look at it, but it's also so terrifying you can be laughing and shaking in your seat. If I have a wish for this film it's that we got to fully soak in the werewolf. It's a hell of a design and so unique You just want to pause the film and look at it. I can understand why the decision was made to not overwhelm the audience, but like Jaws if you fail to show the beast for too long your house of cards wobbles, and you risk losing your audience. You've got to show them something. Thankfully in this case we have the Nazzi Werewolves to tide us over until the shocking climax!

Vital Disc Stats: The 4K Ultra HD Blu-ray
After prowling around the EU markets for a couple of years, An American Werewolf in London comes home to 4K Ultra HD Blu-ray thanks to Arrow Video in a single-disc Limited Edition set. Pressed on a BD-100 disc, this set is like Arrow’s other Limited Edition sets and comes housed in a standard single-disc keepcase with reversible insert artwork with hardstock book slipcase. Also included in this set are six lobby card reproductions, a poster, and a sixty-page booklet. The disc loads to an animated main menu with traditional navigation options. Be sure to dig around to find the easter egg. 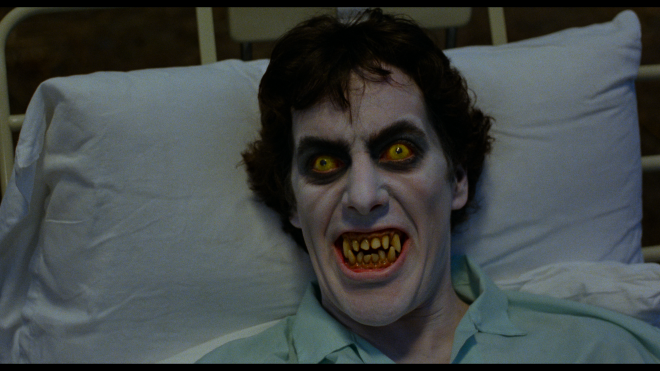 I don’t have the Turbine release personally to compare to, but I’m very happy with the native 4K Dolby Vision (and HDR10) transfer offered here. An American Werewolf In London has always had a dicey history on home video. The first Blu-ray was pretty good for what it was but had a number of flaws. The 2016 remaster offered some improvements but it used a bit too much DNR and a little too much edge enhancement for its own good. Then in 2019 Arrow got into the game with their own restoration effort that easily bested the competition. And now Arrow has upgraded their already great release for an even better one.

For the film’s age and how it was shot and the film stock used, grain has always been a ready companion for this film, and depending on the release it’s either looked too noisy or scrubbed and inorganic. Again I don’t have the Turbine release to compare, but I was impressed with Arrow’s first Blu-ray and they’ve killed it with this disc. Film grain again maintains its natural texture and quality without becoming too noisy and distracting or evert looking like it was scrubbed flat. With the higher resolution, the film grain texture appears more organic and naturally cinematic than previous releases I've seen. Details are terrific allowing you to fully appreciate the intricate work from Rick Baker’s makeup crew. 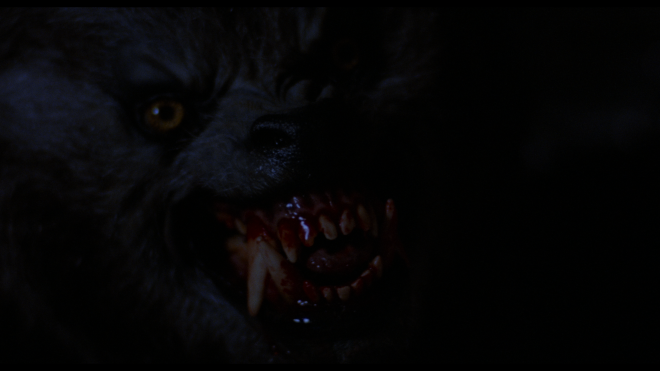 The film has always been on the drab side considering the location and brightness levels like the film grain has been iffy from one release to the next. I’m pleased to see that this transfer is brighter than some of the past releases but doesn’t hurt black levels. The Dolby Vision grading is judiciously applied in that regard so we get to appreciate the enhancements in color, blacks, shadows, and whites without the image becoming blasted out or unnatural. Some very dark scenes still struggle a little - David and Undead Jack in the porno theater is still very dark. This is better than I’ve seen it before, but with the great makeup and creature effects in these scenes, I really want to soak in that imagery more than we can. As a whole, this is the best I’ve seen this film and I’m glad to have it in the collection. 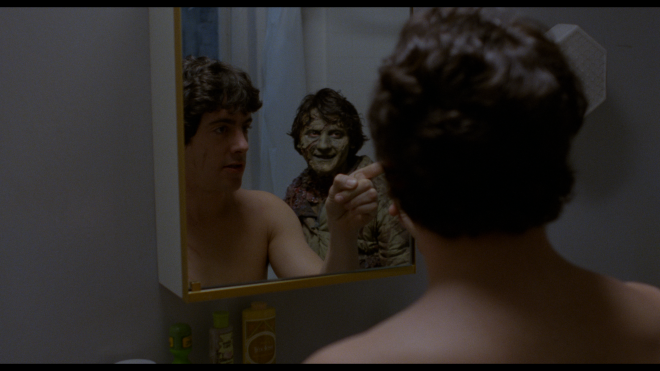 This release of American Werewolf in London arrives with a DTS-HD MA 5.1 and an LPCM mono track. This 5.1 track seems to be the same one that’s been circulating around town for a few years now. It’s pretty good. Not going to blow your hair back but it’s good for what it offers - a nice spaciously rendered mix with some pretty good imaging and clean audio. It’s still very front-heavy with only modest slides into sides and rear channels but it succeeds more often than not.

The mono track is also very good. Traditionalists will appreciate having this option. I liked hearing this track’s original design and it hits just right. It might not be as open and spacious as the 5.1 track by its very nature, but it’s still very good. My one complaint though is it felt like I had to punch the volume just a tad higher than my average setting. Not a huge complaint really but something to consider when running this on your own rig. 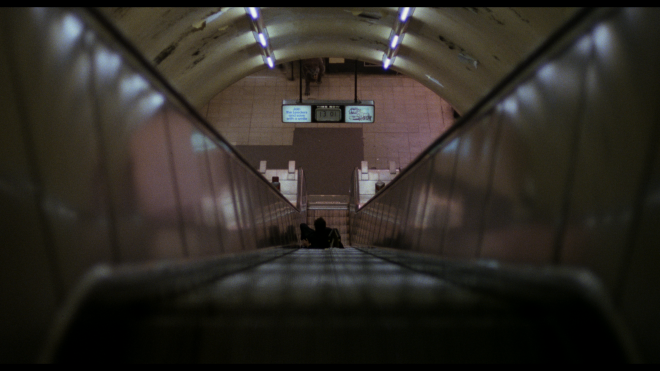 Well, it wouldn’t be an Arrow Video release without a damned impressive selection of bonus features. I’m even more impressed they managed to squeeze all of them on the same disc as the main feature without having to offer up a second disc. This collection of bonus features is everything that Arrow previously assembled for their 1080p Blu-ray release. There’s nothing new in the stew in that regard. That said, what’s here is a lot of great stuff. You get to excellent audio commentaries, a feature-length making-of, on top of some recent and archival interviews with cast and crew. You’ve got several hours of great material to pick through if you haven’t dug through it all already. 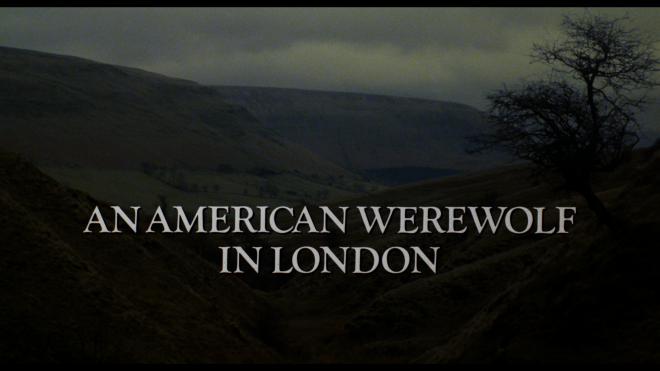 An American Werewolf in London is a genuine horror-comedy classic. It frighteningly and hilariously deals with the horrors of the werewolf curse in a way not seen before. The Paris-themed pseudo-sequel tried to recapture the magic, but lightning rarely strikes the same franchise twice. John Landis did it right the first time and no sequel or reboot/remake is ever going to touch it.

After many, many releases on home video, it feels like Arrow Video has delivered fans something resembling a darn close to definitive release on 4K Ultra HD Blu-ray. If you didn’t snag the German Import set, this is a great pick-up. The native 4K Dolby Vision transfer is fantastic, the audio is solid, and the bonus features are numerous and informative. Highly Recommended.