Two-time Grammy winner Bob James leads an accomplished trio that serves up more than a dozen smooth jazz numbers in Feel Like Making Live! Crystalline Atmos audio distinguishes this high-quality disc, while the vibrant 4K UHD video with HDR10 puts us right in the studio with the musicians and helps us more fully appreciate their virtuosity. Though the camera work isn't nearly as exciting as the music, jazz aficionados will certainly appreciate this intimate concert that honors one of the genre's most enduring and influential performers and arrangers. For Fans Only.

That's what two-time Grammy Award-winner Bob James says about music, and the now 82-year-old keyboardist and arranger backs up the statement with a stirring jazz performance in Feel Like Making Live! Recorded and shot in 2018 when James was 78, this intimate session allows the acclaimed musician to reflect on his multi-decade career, reminisce about working with such giants as Quincy Jones, Sarah Vaughn, Grover Washington, Jr., and David Sanborn, and play some of his greatest hits and more recent arrangements. Michael Palazzolo on upright bass and Billy Kilson on drums join James for this melodic trip down memory lane that proves James is not only still a virtuoso, but also still relevant.

Interview clips frame the song set that includes such James standards as "Angela," "Maputo," "Westchester Lady," and "Nautilus," as well as a new-ish arrangement of Elton John's "Rocket Man," a fond look back at "Misty," which he performed with iconic jazz vocalist Sarah Vaughn, and a fresh take on "Feel Like Making Love," a 1970s Roberta Flack hit on which James was an original session musician. James' silky keyboard stylings are a jazz-lover's dream, and his steadfast commitment to musical integrity and exploration has led to his embrace by the hip hop community, which has given some of his compositions a contemporary twist, much to James' delighted dismay. 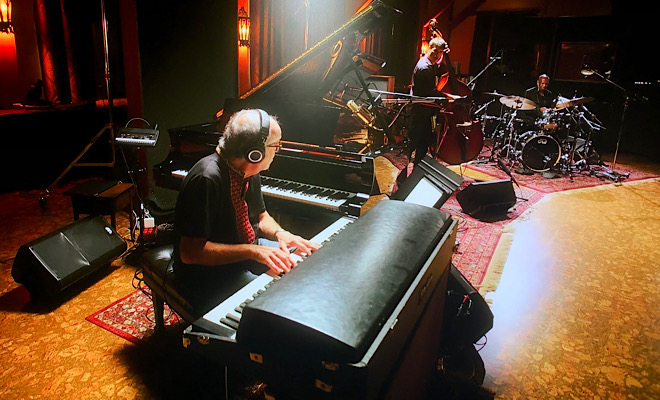 The music is so beautiful, sometimes i just wanted to close my eyes and listen to it. Sadly, that became easier to do as the concert wore on and the bland visuals failed to sufficiently engage me. Though it's initially a treat to watch the Bob James Trio - and especially James himself - perform the almost 90-minute set, the novelty starts to wears thin and eyelids become heavy after about the first 45 minutes.

James and his crew are not to blame. On the contrary, their visible passion for the music never wanes, but repetitive camera angles and a lack of visual imagination hamper the overall effect. Feel Like Making Live! would be a great disc to put on as background entertainment at a party, but it's tough to sit there and watch the whole 90-minute concert in one sitting unless you're a diehard fan. 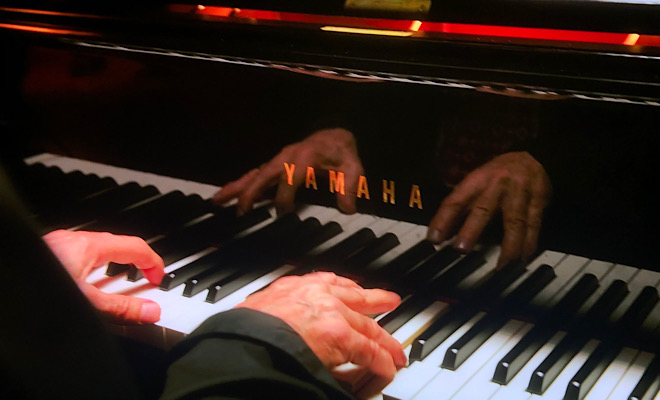 James, who might be best remembered by mainstream audiences for writing the theme song for the TV sitcom Taxi, was discovered by Quincy Jones in 1962 during his tenure at the esteemed Berklee College of Music in Boston. James entered his band in the Norte Dame Collegiate Jazz Festival, where the group's avant-garde style caught the attention of Jones, who - along with Oscar-winning composer Henry Mancini - was one of the judges. James' trio won the competition, and not long after, Jones engineered a record deal for James. That led to a stint as accompanist for legendary jazz vocalist Sarah Vaughn and career as a solo artist, session player, composer, and arranger.

Feel Like Making Live! captures James and his trio doing what they do best...straight-up, organic jazz in an intimate studio setting. James, Palazzolo, and Kilson are all business; they don't showboat or play to the rafters. They're committed to their instruments, committed to the ensemble, and committed to making great music. Yes, it's all being filmed, but these musicians are playing for themselves and utterly absorbed in the moment. We're like flies on the wall of a jam session, soaking up the ambience and marveling at the skill on display. The visuals may not be riveting, but the music is often sublime. 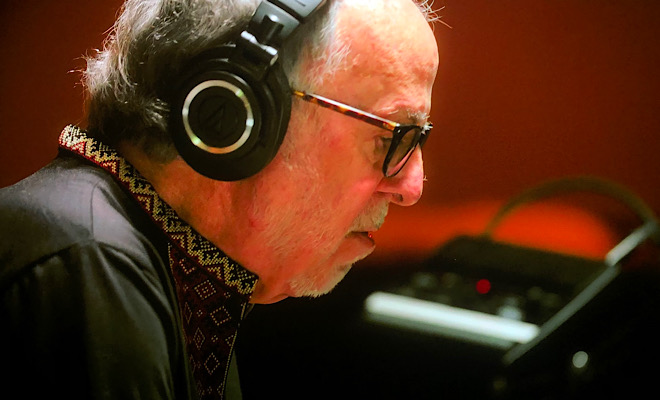 Vital Disc Stats: The 4K Ultra HD Blu-ray
Feel Like Making Live! arrives on 4K Ultra HD Blu-ray packaged in a standard case. A 36-page booklet featuring a biographical profile of James by music writer Charles Waring, an account of the recording session by engineer Tom Hall, notes on the immersive audio by 3D immersive sound creator Hideo Irimajiri, and several behind-the-scenes photos is tucked inside the front cover. Video codec is 2160p/HEVC H.265 with HDR10 and default audio is Dolby Atmos in Dolby TrueHD. (An AURO-3D in DTS-HD Master Audio track and uncompressed LPCM 2.0 track are also included.) Once the disc is inserted into the player, the full motion menu that strangely lacks music immediately pops up; no previews or promos precede it.

As crisp, smooth, and cool as the jazz the Bob James Trio plays, the 2160p/HEVC H.265 transfer with HDR10 immerses us in the intimate studio atmosphere where Feel Like Making Live! was shot. Excellent clarity and contrast produce a vibrant picture that brims with fine detail. Overhead and handheld shots allow us to drink in the intricate patterns of a trio of Oriental rugs and tangle of cables on the studio floor, while sharp close-ups not only render facial features well, but also the delicate contours and impeccable craftsmanship of the various instruments. The blacks of the piano are dense and emit a lovely sheen that produces a striking reflection; the bright white lights occasionally run a bit hot, but remain stable; and colors look natural throughout. Good shadow delineation keeps crush at bay, and no video noise or artifacts creep into the frame. Though the emphasis of this production is clearly on the music, the videl quality is quite pleasing, especially with the enhanced clarity of 4K UHD.

Purity of tone is difficult to achieve on a music recording, but the Dolby Atmos track on Feel Like Making Live! comes about as close as I've ever heard to achieving that result. Delivered via Dolby TrueHD, the Atmos track immerses the listener in the music and brings even the most delicate drum and cymbal nuances to brilliant life. The keyboards of course take precedence throughout, but the bass and percussion make palpable statements that create an integrated whole that's both soothing and stirring. Superior stereo separation across the front channels isolates the various instruments, and though there's not a whole lot of distinct surround effects, when the rears do kick in, the soundscape becomes quite thrilling. "Topside" is probably the best example of this, and the only cut that makes noticeable use of the overhead Atmos effects. A wide dynamic scale manages all the highs and lows without a hint of distortion; the subwoofer lends the bass stylings just the right amount of weight; exceptional fidelity and depth of tone help the audio fill the listening space; and James' intermittent remarks between selections are clear and easy to comprehend. This is truly a stunning track that will delight both discriminating audiophiles and casual listeners.

Two other audio options are included. The AURO-3D track in DTS-HD Master Audio is as clean and crisp as the Atmos track, but not quite as vibrant and immersive. There's also an Uncompressed PCM 2.0 track, but for some reason it would not play on my system.

A few supplements enhance the disc.

If you've ever yearned for your own private and oh-so-intimate jazz concert, Feel Like Making Live! will satisfy that craving. The Bob James Trio, led by the eponymous, Grammy-winning keyboardist, performs more than a dozen numbers in a studio setting that encompasses various styles and moods. The sublime music benefits from a dynamite Dolby Atmos soundtrack, and while the HDR10 video presentation is equally crisp, the understated visuals lack excitement. If you want to see James and his bassist and drummer perform the songs, you'll definitely want to pick up this disc, but if the music is all that matters, you might want to opt for the CD or vinyl instead. For Fans Only.