Alligator is a fantastic 1980's film that takes its cues from JAWS, but instead of a shark, it's a giant man-eating alligator in the sewers. The film has a quick pace, wastes no time in getting to the carnage and action, and has some amazing performances from some A-list actors. Scream Factory has given the film a brand new, glorious 4K transfer that looks exceptional and a mono DTS-HD audio track. It's also loaded with over two hours of bonus content that are some of the best extras on a disc. Highly Recommended.

After Steven Spielberg changed the cinema landscape with his underwater horror film JAWS, every other Hollywood studio wanted to cash in on the big animal vs human element. Many tried and many failed to see success, but in 1980, director Lewis Teague and writer John Sayles made their own rip-off called Alligator. Instead of a shark, it was a giant reptile wreaking havoc not only in the water but also on land and in the sewers. The result of its great pacing and brilliant performances left this small film at the top of everyone's list who were looking for something similar to Spielberg's blockbuster shark movie.

From Alligator, Teague became popular in Hollywood, going on to make such iconic films as Cujo, The Jewel of the Nile, The Cat's Eye, and even Navy SEALs. It was the same thing with Sayles who went on to write The Howling, a version of E.T., and Apollo 13. Both filmmakers started with Alligator as their big break, which is saying something, given the premise and its B-movie aesthetic. But it didn't matter if Alligator was schlock or an Oscar contender, the filmmaking that mixed well with the script and amazing visual effects had audiences clamoring for more gator gore.

What works so perfectly with Alligator is how the film never wastes any time from cutting to the action and meat of the story. There was no room for filler or dilly-dallying in the script, which ultimately kept this screenplay and pace on its toes. Plus there are just enough kooky characters to keep audiences guessing from start to finish, along with a small satire on government interference with nature. But when a movie is led by the late, great Robert Forster (Jackie Brown), there's a sense of quality and charisma that comes in tow. In fact, Tarantino based Forster's character in Jackie Brown off his character in Alligator. 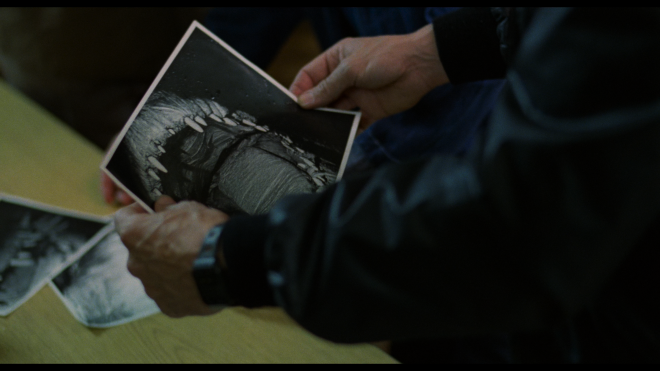 Alligator's story is simple enough at its core where a family is on vacation and buys a small pet alligator for their kids at a tourist shop. Once back at their home, the father flushes the alligator down the toilet so he doesn't have to take care of it. Twelve years later, there's strangeness brewing in the sewers as that small pet alligator has been feeding off of discarded rodents from the local science lab that have been injected with all sorts of weird meds and formulas, that has caused the critter to grow into a monster reptile the size of a few cars. It's not long before the alligator begins to feed on humans, which sets the town in panic mode.

But what sets Alligator apart from the rest of these spin-offs besides its amazing pacing is how Sayles and Teague utilized their characters, specifically with Forster's police officer Madison. This character is a straight shooter, much like how Max Cherry is in Jackie Brown, but Officer Madison is not liked by his fellow officers as he's known as a curse since his past partners all end up dead. When the alligator starts chomping up sewer workers, maintenance people, and then police, the blame is initially targeted at Madison. This brilliant element allows Madison to not be a one-note hero, but to show struggle within his own family of officers while tracking down a giant monster in the streets, and it works perfectly. 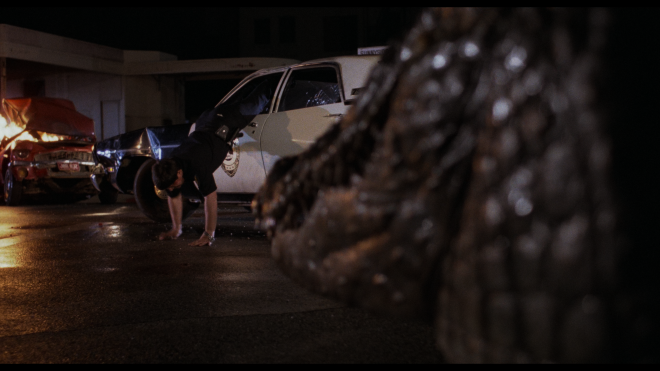 The film also satirizes the media's take on such an event, revealing what local news would do in a situation of rumored giant reptile sightings. Needless to say, the media hasn't come a long way since 1980 in this regard. With The Godfather actor Michael V. Gazzo, Sue Lyon, and a young Kane Hodder playing the Alligator, this film was always destined for success. Not to mention, Breaking Bad star Bryan Cranston serves as a production assistant and creature effects helper on the film as well. This movie was ripe with young talent and kept its quick pace and wonderful creature effects at an all-time high. Still to this day, Alligator is a fun watch and never crosses into dull territory, which is a big part of its appeal.

Alligator has the perfect equation of talent in front and behind the camera and end result is a tight flick made up of a stunning cast of character actors who all give amazing performances. The winks and nods to JAWS are done modestly and well while standing on its own four scaly legs. And the practical gore and alligator effects look exquisite every time they are front and center on the screen. Alligator is still haunting and a ton of fun some forty-two years later.

Vital Disc Stats: The 4K Ultra HD Blu-ray
Alligator chomps its way to 4K via Scream Factory in a new 4K Ultra HD Blu-ray Collector’s Edition from Scream Factory. There are three discs, one being the 4K, another being the Blu-ray, and the other being the 1080p Television cut of the film. The discs are housed in a hard, black plastic case with a cardboard sleeve with new artwork featuring an angry alligator. There is reverse artwork of the original poster of the film. Unfortunately, there is no booklet, insert, or digital code. 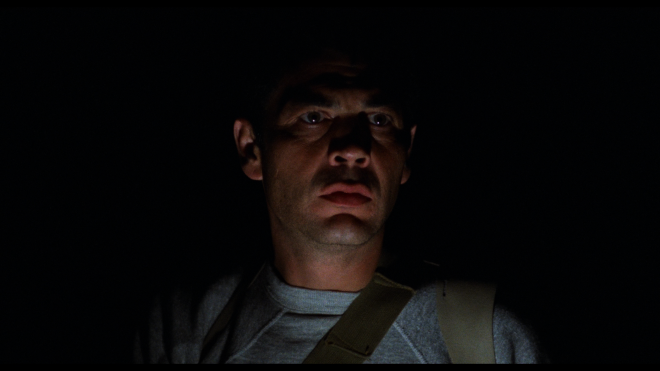 More often than not, the good folks at Scream Factory deliver an older, forgotten movie in a brand new 4K presentation that makes said film look brand new and breathes new life into a movie that might have been lost on shelves forever. This rings true with Alligator, which has been given a new 2160p UHD 4K transfer with Dolby Vision (and HDR10) and looks phenomenal.

The colors all look more natural than on its previous release and have all been boosted with its Dolby Vision. Outdoor locations reveal some great greens in trees and primary colors in clothes and on vehicles. Inside the police station and inside homes, that color palette becomes warmer with more browns, oranges, and wooden-like colors. The color of the alligator ranges with darker, cooler colors that give off a wonderful reflection in the different light settings. The amazing massacre scene at the wedding reveals some great white tuxedos that look great with flashy blood-red stains as well. Darker sequences have inky blacks that never bleed or show murkiness. These nighttime scenes look so much better with this Dolby Vision-enabled image in that the creature and the trash surrounding the sewers can now be seen easily. 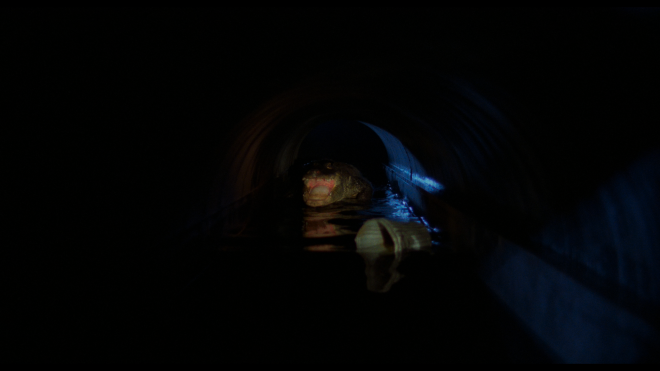 This also gives way to some fantastic-looking detail. Closeups reveal facial pores, individual hairs, wrinkles, and makeup effects on the actor's faces. Textures and threads in the clothing also look great here as well. the scales and textures on the alligator's skin look amazingly good. Every different scale and color can now be witnessed in all lighting conditions. Wider shots of the city and of the alligator look sharp as well. Skin tones are all-natural and there are zero issues with any dirt, debris, or any banding and noise. The film still retains its natural filmic quality with a steady layer of grain as well. This is a grande transfer at its finest. 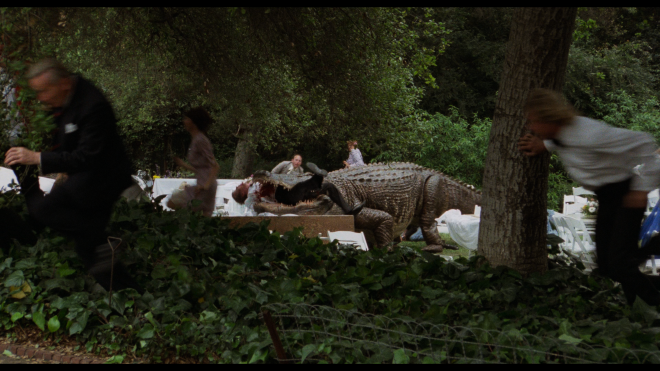 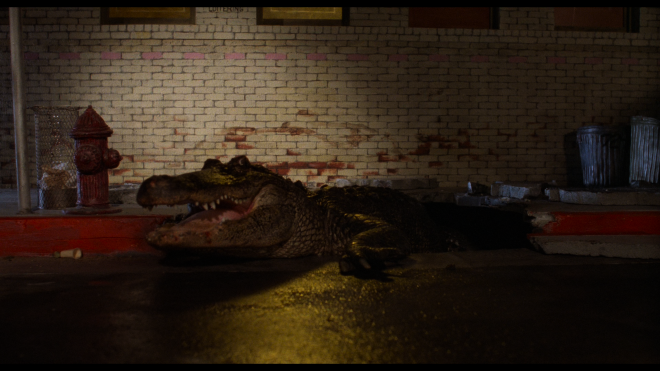 This release only comes with a DTS-HD in Mono. Unfortunately, there is not a new 5.1 track. That being said, this mono track sounds wonderful and full. Sound effects are mostly robust but lack that true low end of bass with bigger effects or the score. There is still some decent directionality with levels, but this is rather a straightforward audio mix. The treble does well in the bigger action moments and with the alligator's roars.

Ambient noises of people screaming or cars passing by also sound good and mix well with the dialogue. The score keeps things lively and the dialogue might sound a tiny bit bland without the low end to really lift things up. This is still a great audio track. 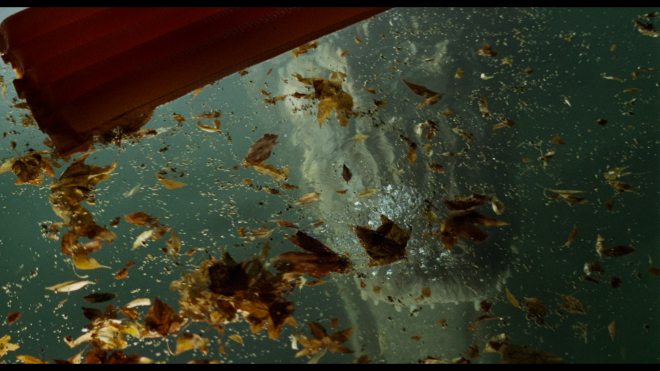 In addition to the great audio commentary, there are over 140 minutes of bonus material included here, most of which are new interviews with the cast and crew. The Bryan Cranston extra is simply magnificent. 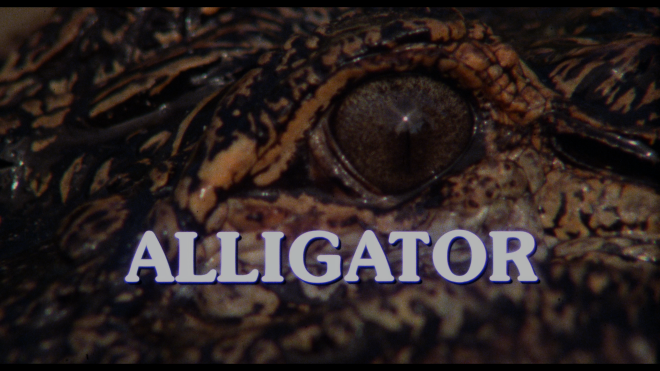 Alligator was thought to be lost and forgotten long ago, but the magic makers at Scream Factory have given new life to the film with a brand new, luxurious 4K transfer with Dolby Vision that looks amazing. The Mono DTS-HD audio track sounds wonderful as well. Additionally, there is a treasure trove of bonus features, all of which are a must-watch. The film itself still stands up tall and makes a welcome return to home video after being so long out of print on an inferior DVD release. Highly Recommended.