After six live-action films, it’s time for the franchise cinematic reboot of the video game series with Resident Evil: Welcome To Raccoon City. Written and directed by Johannes Roberts, this latest attempt to adapt the popular Capcom games starts out strong with cool homages to the first two games but falls apart fast. While not a great movie, Sony delivers a technically impressive 4K Ultra HD Blu-ray with an excellent Native 4K Dolby Vision transfer and an awesome Atmos mix to match. Might be better than some of the past Resident Evil movies but it’s still far from greatness. Worth A Look

After six successful - financially not critically - films from writer/director Paul W.S. Anderson and starring Milla Jovovich, Sony felt it was time to reboot the franchise. Which to be honest was probably a good idea. The original six films deviated wildly from the video game series growing more and more ridiculous with each entry until 2016’s absurd Resident Evil: The Final Chapter. To take charge of the franchise and bring it back to its video game roots, Sony turned to 47 Meters Down director Johannes Roberts.

This should have been an easy win, slam dunk. The Resident Evil games aren’t complicated. They’re essentially interactive zombie movies with more grotesque and horrific monster villains from one installment to the next. But somehow the series never quite translates to live-action movies. I was excited when it was announced that Roberts was taking on the series. Even though they’re silly, I enjoyed both 47 Meters Down films and thought his knack for staging fright sequences would work well for a back-to-basics take on the franchise. Well, that turns out to be half true. 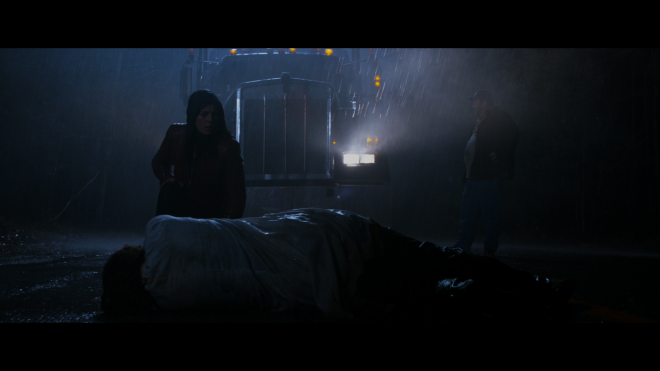 The first half of Resident Evil: Welcome To Raccoon City is dynamite stuff. It takes its time, slowly introduces characters, adds some creepy elements early with an orphanage sequence throwing in numerous callbacks to the games. I missed this in theaters having only read some pretty harsh reviews and I started to wonder if critics didn’t completely miss the mark. Sadly, once the second half kicks in the film became an undercooked ill-conceived mess.

The biggest issue is when the cast of characters is split between the creepy mansion of the first game and the Raccoon City streets of the second and third games. Johannes Roberts’ screenplay just can’t manage multiple locations and any tension and terror quickly slips away. Had the film stuck to one location or didn’t try to divide the groups this could have been something. But by the third act, all of the creepy practical effects-driven terrors have given away to some pretty terrible CGI effects work with a plot that becomes more convoluted by the minute. Which is pretty much par for the course with this film series. I guess the best thing I can say for Resident Evil: Welcome To Raccoon city is that it’s not any worse than the other live-action films. It’s entertaining, it has its moments with some great nods to the games, but yeah, it’s another missed opportunity. 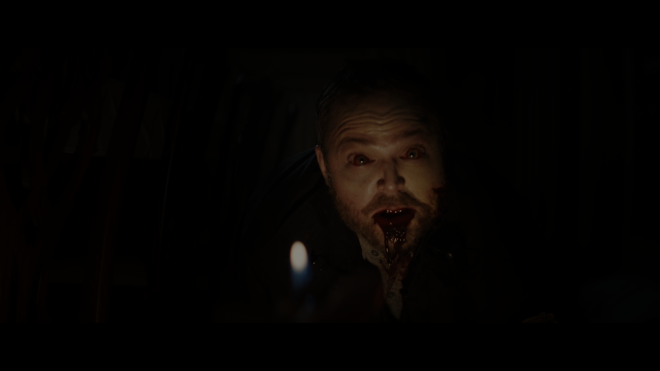 Vital Disc Stats: The 4K Ultra HD Blu-ray
Resident Evil: Welcome to Raccoon City arrives on 4K Ultra HD Blu-ray from Sony in a two-disc 4K UHD + Blu-ray + Digital set. The discs are housed in a sturdy two-disc case with identical slipcover artwork. The disc loads to trailers for other upcoming Sony releases before arriving at a static image main menu with the bonus features lined up on the right side of the screen. 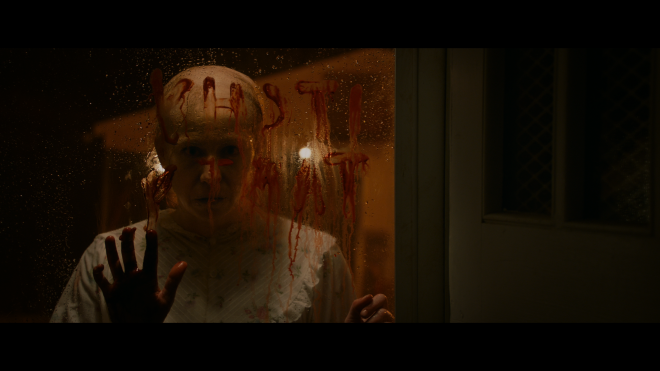 While the film might not be much to talk about, leave it to Sony to deliver an excellent native 4K 2160p Dolby Vision HDR (with HDR10) transfer. In keeping with the games, this is a pretty damn dark and shadowy film with only patches of light and color where any number of horrors can lurk. Shot digitally, the image carries impeccable detail for facial features, clothing, and some incredible attention to detail for set design and locations replicating even the tiniest details from the games. This is especially the case for some of the initial gnarly zombie makeup effects with chewed-up faces or ghastly neck wounds. Free of any noise or compression troubles, it’s a clean image.

Dolby Vision HDR does what it does best offering up some impressive color highlights, black level enhancements, and contrast with brilliant whites. As I said, this is a very shadow-heavy image and part of the fun of this film is how well it uses light and dark and the shades in between to hide any number of creepy creatures. It’s a ridiculous sequence but it works when Chris Redfield needs to use his lighter to see where the zombies are and the light keeps going out. Those little flashes of light and shadow were brilliant. Likewise when stuck in the dark and muzzle flashes are the only light source. Colors don’t get a lot of bright or daylight playtime here, but there are some great highlights for reds, yellows, and blues to shine.

Of course, this is where things get a bit dodgy. All this impressive clarity and HDR grading pin the rather dicey CGI work into a corner. You can forgive a CGI crow or little effect here and there because they’re not something that calls too much attention, but a big final monster? That looked pretty rough and the added clarity and HDR just make it stand out. Some CGI enhancements when this creature was still semi-human are even more obvious. So that’s my one knock for this otherwise excellent-looking transfer. 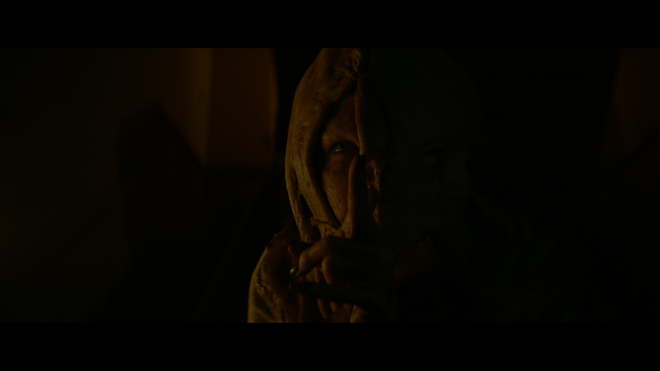 Staying in form with an excellent video presentation, Sony gives Resident Evil: Welcome To Raccoon City an awesome fully engaging Atmos mix to match. The DTS-HD MA 5.1 mix is also included here, but the Atmos is the clean and clear winner. From rain-drenched streets to creepy creaky wood floors to diseased birds and the moans of the undead, this is a full-blooded track. Imaging throughout is fantastic, giving a full range of pinpoint object-placement effects work. Height channels get a lot of work between the impressive moody score and some specific critters scuttling overhead. I mentioned the lighter sequence in my video assessment, and that holds for how well the audio works to this film’s best advantage.

Dialog is clean and clear throughout, there’s never any issue hearing what people are saying even in the most action-packed moments. The score by Mark Korven is excellent moody material and spread out throughout the channels for maximum effect. Levels are spot on without any need to compensate there, but I had a blast with this one turned up. When that emergency siren starts sounding throughout the city it’s good stuff! And yes, there is that 5.1 mix which is very good, and if that’s what you’re best rigged for is a great way to go. But make no mistake if you can rock the Atmos track there isn’t any contest. 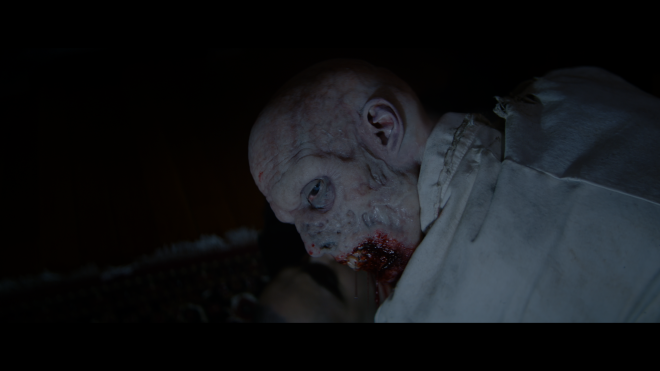 For how few and short, bonus features are decent. There’s not a lot to look at, barely 25-minutes worth of material, but they cover some interesting ground about production design and effects work and the little details from the games that translated to the film.

I had some high hopes for Resident Evil: Welcome To Raccoon City. Visually, it’s a near-perfect recreation of famous scenes and locations from the first two games. As a movie, sadly it’s just not there. It starts out great. The first half is solid creepy dread-inducing nightmare fuel with some great visuals. But when the story gets going it quickly falls apart as an unfortunate case of trying to do way too much with very little. A simplified, more streamlined take would have worked wonders here.

While the story misses the mark, you have to hand it to Sony for not shirking their duties in the disc department. This native 4K Dolby Vision HDR transfer is gorgeous stuff and a true compliment to the visual impact the film went for and largely achieved. Likewise, the Dolby Atmos mix is equally impressive with some sonic delights and auditory terrors. Bonus features are slim but they’re at least an interesting watch. If you’re a fan of the movies thus far you know not to expect too much, but this reboot could have been a home run, instead, it’s passable diverting entertainment. Worth A Look