A throwback to 80s adult animation classics, The Spine of Night brings the art form of animation for adults and magic and wizardry to the modern era. While the story is terrific, the crude rotoscope-styled character animation may be off-putting. But give it time, once the story kicks in and the copious amounts of gore and ultra-violence settle into a rhythm, the film is a fun homage to a time when one’s parents could easily rent the wrong movie for their kids. Now on 4K Ultra HD from RLJE, the disc offers a fine visual experience but without HDR there’s little to distinguish it from its 1080p counterpart. Certainly not to everyone’s tastes, but fans of the genre should definitely consider it Worth A Look

Knowledge is forbidden. A sect of guardians has assembled the wealth of mankind’s knowledge inscribed on tablets and books, translated them, and archived them. But when an earthly power - a mysterious blue plant known as “the bloom” - that can create great abundance or be used to destroy is stolen from its rightful caretakers, all of mankind will slip into an era of unending strife and darkness. Now it’s up to a variety of heroes to stop the one responsible and bring back balance to nature and mankind. 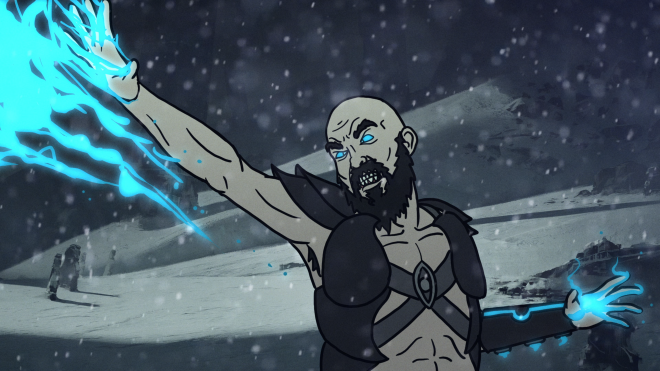 Honest talk now. How many of you out there were 80s brats like me that devoured every tape their parents rented for them? I loved cartoons (naturally), so it became a task for my folks to find new movies for me to watch in an era when Disney hadn’t fully opened their “vault.” Without much thinking about what he was grabbing, my Dad would often grab movies like Fire and Ice and Starchaser: The Legend of Orin, alongside classics like The Rats of NIMH thinking it's a cartoon, it's for kids. There often wasn’t much notice paid until the content got particularly violent - or there was an abundance of animated exposed body parts. But by that time, it was too late to do anything about it. The movie was almost over and I was at an age where I didn’t “get” what the issue was. This was just a cartoon. I loved that time of rental shop innocence that just doesn’t exist anymore.

It’s that thick nostalgia that makes a project like Morgan Galen King and Philip Gelatt’s The Spine of Night so appealing - at first. When this sort of project comes along I expect it to be more exploitive of those classics and films like Heavy Metal and just try to profit off the name drops in the description. Always be leery whenever you read “in the tradition of…” - usually nothing good can come of it. But here, The Spine of Night actually delivers. It may not be as great as those legendary films, but it's a pretty damn good and entertaining way to spend an hour and a half.

Now, this is going to be a sticking thorn for many and it was for me initially - the rotoscoped animation style. Where the background plates are lush, nuanced, and artfully detailed, the character designs are pretty flat and just rather cheap-looking at times. The recent Night of the Animated Dead is where this style can go the exact wrong direction. However, in this case, I found it worked well. I was initially put off by it, but after a few minutes and once the story got going, I couldn’t take my eyes off the screen. So for those aiming to give this a whirl, give it a chance to get started. 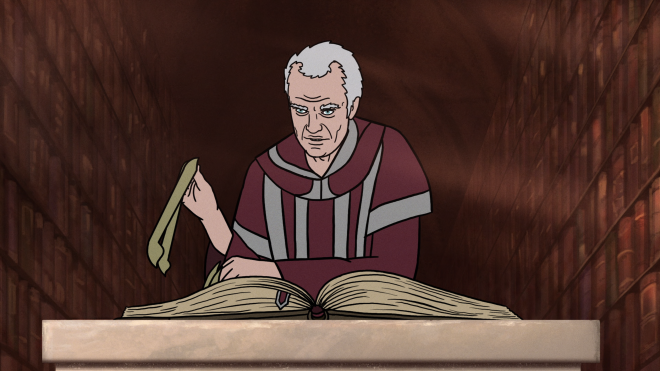 In this day and age of nostalgia-driven franchise reboots or homages, it’s nice to see a project that’s not only an original new take on the material but also works. The Spine of Night story might not make a whole lot of sense at times, it jumps around quite a bit and can often play more like an anthology story with “the bloom” the central MacGuffin carrying each tale. But the engaging style and the great voice cast featuring the talents of Lucy Lawless, Richard E. Grant, Larry Fessenden, Joe Manganiello, and actually a good turn from Patton Oswalt as the evil Lord Pyrantin keep this film rolling and entertaining. 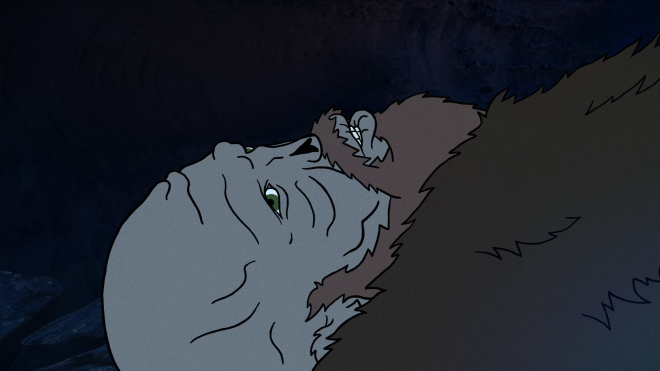 Vital Disc Stats: The 4K Ultra HD Blu-ray
The Spine of Night arrives in a two-disc 4K UHD Blu-ray + Blu-ray combo pack. Housed exclusively in a SteelBook case with some pretty sick artwork. 4K is pressed on a BD-66 with the 1080p edition earning a Region A locked BD-50 disc. The discs load to previews for other Shudder releases before arriving at standard main menus. Bonus features are found on both discs. 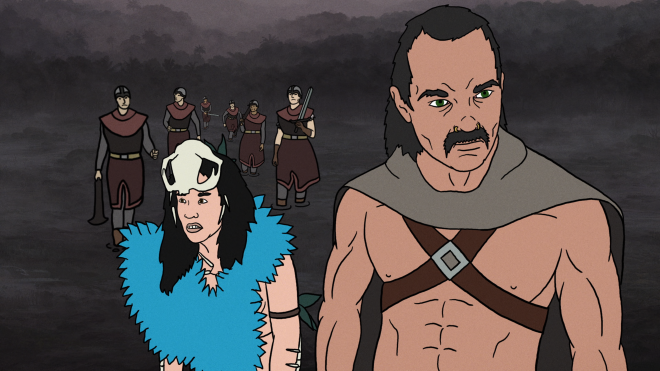 The Spine of Night arrives with a respectable 2160p 1.78:1 SDR transfer. Strictly speaking as a 4K release, it’s good - but without HDR, there’s little to distinguish it over the equally very good included 1080p transfer. This is a bold and colorful film with blues and reds earning a lot of playing time on the field. The Bloom and the light of the power it exudes is the main contrasting color to the murky doom and gloom of the main feature. Where I will give this release an edge over the 1080p disc is character lines are a little sharper and figures tend to pop just a little more against the static background slates. And again, while some may not dig the character animations, the backgrounds are pretty spectacular and well-produced giving the image a lot of visual punch when and where needed. All in all a solid disc, but if all you need is a 1080p Blu-ray, you get both in this set. 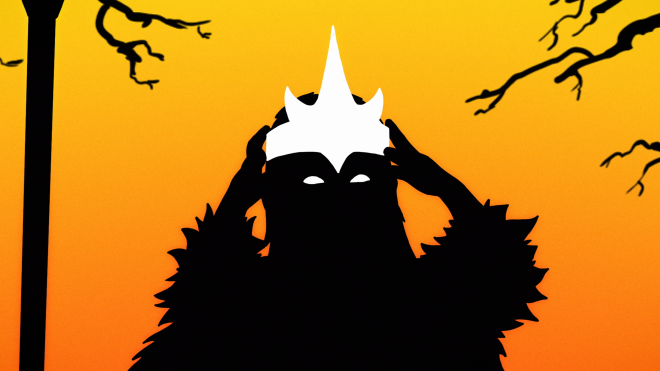 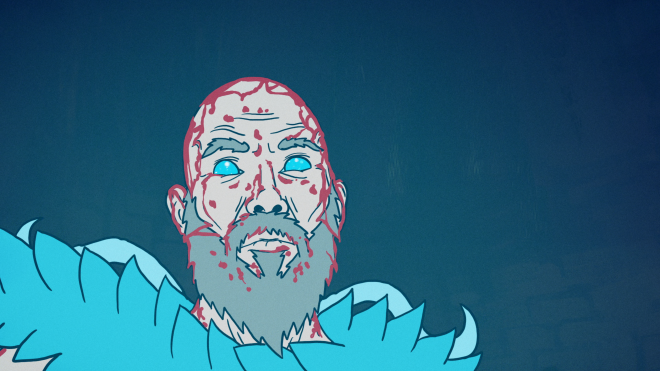 Working higher up the value scale, the DTS-HD MA 5.1 mix is excellent. This is a nicely immersive mix with impressive imaging through the channels with clean and clear dialog throughout. Scoring by Peter Scartabello is appropriately moody and engaging without overpowering big action events. There are some segments where dialog can sound a little canned as if the voice actor may have recorded this in their own home closet instead of a studio, but it’s a minimal distraction, and honestly in a weird way lends itself well to the movie. Action sounds are well prioritized and some crowded sequences work the sides nicely to fill the soundscape. For a violent animated callback, gore and chopping and slashing and stabbing sound effects get a lot of extra TLC and if you’re running DTS Neural:X it adds a little extra oomph to the squish factor of this flick. 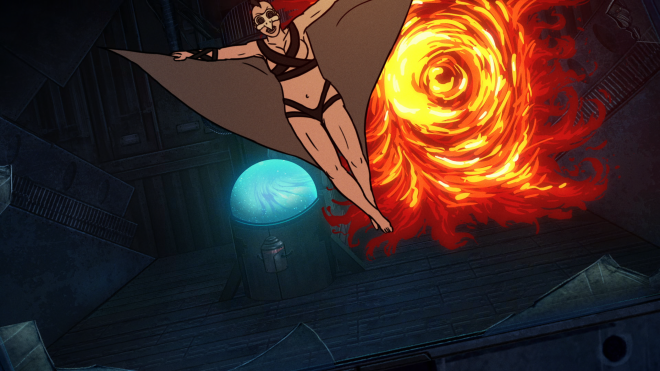 As mentioned previously, bonus features are identical between discs. There’s not a ton of material here, but the half-hour making-of is interesting for its look at what inspired the filmmakers to roll for a story like The Spine of Night. It might not be the most in-depth take on things, but it’s a good interview with the filmmakers. Next up is a pair of pretty cool short films from co-writer/director Morgan Galen King. 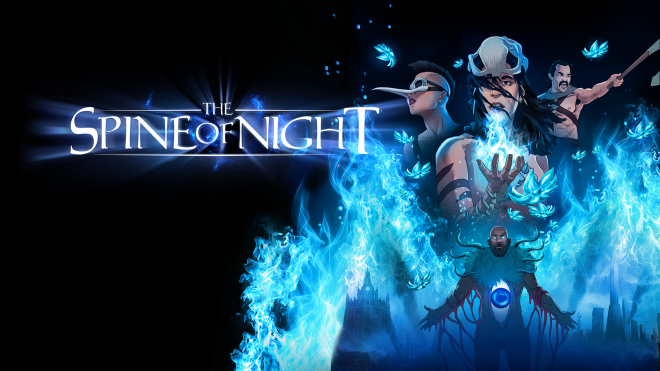 The Spine of Night certainly isn’t for everyone out there. Outside of Game of Thrones, I feel like it’s been a while since we’ve really gotten to go dark and dirty with fantasy filmmaking the likes we saw in the 80s. Like those great animated adventures of long ago - The Spine of Night is a fitting throwback to that style of dark adult-focused animation with a cool premise and engrossing story. Some may take issue with the style of animation, but after a few moments, I found it endearing to the film and less of a hindrance.

RLJE brings The Spine of Night to 4K Ultra HD Blu-ray with a solid disc - but without HDR it offers only modest improvements over the included 1080p disc. The advantage of this set is some killer SteelBook artwork. The audio mix is terrific delivering plenty of squish for all the gore and viscera and while not plentiful, the bonus features are worth taking a look at. All in all, I’d certainly say The Spine of Night is Worth A Look. I know it’s not for everyone but for 80s brats like me that saw some pretty unsavory stuff far too early, it was a gas.