Pirates of the Caribbean: The Curse of the Black Pearl - 4K Ultra HD Blu-ray

Yo ho, yo ho! A 4K life for me! 2003’s highly entertaining adventure theme park ride come-to-life, Pirates of the Caribbean: The Curse of the Black Pearl makes port at 4K Ultra HD Blu-ray for the first time. The film that introduced the world to Jack Sparrow is still the best of the series with plenty of laughs, thrills, and impressive visual effects. Sadly - this 4K presentation takes a short drop with a sudden stop. As with its streaming counterpart, some DNR some edge enhancement is compounded by an aggressively dark HDR10 transfer and an Atmos mix that frankly just barely comes to life. Any improvements in the A/V departments are only slight. At best, Worth A Look

[Excerpt From Our Original 2007 Blu-ray Review]

“It may be hard to fathom in retrospect, but Pirates of the Caribbean was never supposed to happen. When it was first announced that Disney was turning its beloved theme park attraction into a motion picture, it was met with plenty of skepticism. How do you turn a cheesy, '50s-era boat ride into a blockbuster movie franchise? What's more, aside from Johnny Depp (who was not yet the Oscar-nominated box office draw he is today), there were no other A-list stars in the cast, only relatively unknown British actors with funny names like Keira Knightley and Orlando Bloom. Indeed, Pirates of the Caribbean seemed like a recipe for disaster. 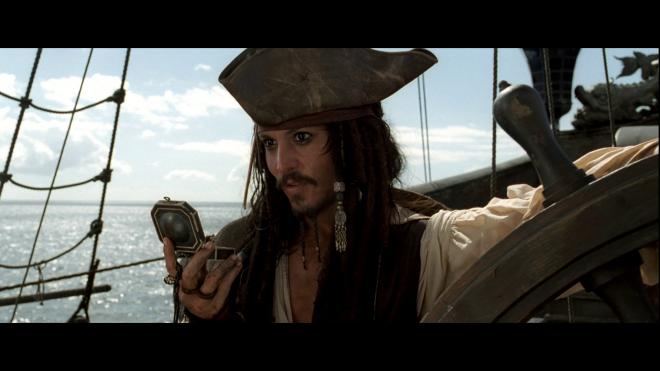 Now here we are, only a few days away from the premiere of the film's second sequel (and purported trilogy-capper) At World's End, and Pirates of the Caribbean has earned its place as one of the biggest phenomenons in recent cinema history. The Curse of the Black Pearl ended up reaping over $500 million in worldwide booty (the follow-up Dead Man's Chest made even more), and Bloom, Knightley and especially Depp are now household names. Even more miraculous, The Curse of the Black Pearl is one of the few recent high-concept Hollywood insta-blockbusters that saw both critical and commercial love in equal measure -- the reviews were almost as good as the grosses.”

For my part, 2003 was a hell of a fun year for period naval adventure films. While I may hold Master and Commander: The Far Side of the World in much higher regard, Pirates of the Caribbean: The Curse of the Black Pearl was a hugely entertaining thrill ride. It’s also rather weird that this was the movie that more or less made audiences take Johnny Depp seriously as a character actor after delivering great performances since the 80s. While I don’t particularly care for the bloated and often tiresome sequels, this first film still holds up. The great action set pieces are still thrilling. Depp’s Jack Sparrow is still a charming inebriated fellow, with Geoffrey Rush delivering an excellent cursed-villain counterpart. The special effects - particularly the cursed pirates - are still damned impressive and very cool. After watching this series entirely too often when they first came to DVD and Blu-ray, I hadn’t seen it in years and am happy to see that Curse of the Black Pearl still holds up nearly 20 years later.

Vital Disc Stats: The 4K Ultra HD Blu-ray
Pirates of the Caribbean: The Curse of the Black Pearl plunders 4K Ultra HD Blu-ray booty in a two-disc 4K UHD + Blu-ray + digital set from Disney. The 4K disc is pressed on a BD-66 disc, the 1080p Blu-ray is the exact same feature film disc from the original two-disc Blu-ray set from 2007. The second bonus features disc from 2007 has not been included in this set. The discs are housed in a standard sturdy black case with identical slipcover artwork. The 4K disc loads to Disney’s standard menu of skipping directly to the feature film or going to an animated main menu with standard navigation options.

Note: We weren't able to rip the 4K disc ahead of publishing, all images are sourced from the included 1080p Blu-ray. 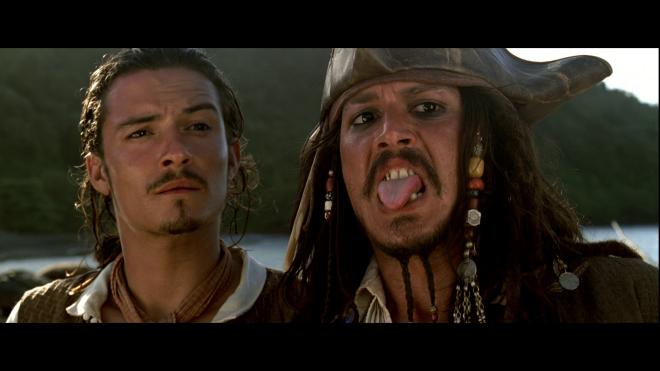 Sporting a not-so-sea fresh 2.35:1 HDR10 transfer, Pirates of the Caribbean: The Curse of the Black Pearl barely avoids Davy Jones’ locker for its 4K Ultra HD debut. Any improvements here are slight at best. I admit as a reviewer I don’t tend to be overly critical or get hung up on small hyperbolic grievances because unless it’s genuinely terrible (i.e. Terminator 2)  I don’t see the point in trashing a release. I try to be positive and focus on what a release does right more than harping on negatives. But I have to say I’m struggling to find positive points to highlight here.

Close-ups and some middle shots expose some cleaner fine facial and costume details, but wide establishing shots are a whiff. When this hit Disney+ with Dolby Vision I wasn’t impressed, to say the least, especially compared to the sequels on the platform. I was hoping that without streaming compression limitations the image would improve on disc, but sadly that’s just not the case. This isn’t even really an issue of a 2K digital intermediate source. There are plenty of great 2K DI releases that offer numerous benefits with HDR - this just isn’t one of them.

In those close-ups and middle shots, details are pretty nearly identical to the old Blu-ray, but what appears to be some DNR and edge enhancement have been applied for some sequences giving the image a notably crunchy texture and/or a smeary unresolved grain structure. The worst offending moments are during scenes with a lot of CGI enhancements. The opening slow travel shot to the close-up of the young Elizabeth is a prime example. Sparrow’s arrival at Port Royal is another. The real-life/CGI-enhanced cursed pirates are another dodgy spot. For scenes without heavy CGI or enhanced effects shots, grain can appear natural and actually the image manages to come to life nicely. When Sparrow is trying to steal the ship and is stopped by the two English guards - that looks terrific. But heavy effects-laden scenes (and there are many) have a smeary texture as if the film grain has been scrubbed out and then added back in. Flipping discs repeatedly, these issues aren’t apparent or at least obviously so in the old 2007 Blu-ray.

Compounding the troubles is an aggressively dark HDR10 presentation that is of little difference to the Disney+ Dolby Vision pass. In the plus column, I’ll give credit for richer deeper navy blues and a more appealing crimson red for the English naval and soldier uniforms with some nice color pop. But again, man it’s really dark. Even in scenes that are supposed to be bright and clear, near-noon daylight can appear like the sun is fading out like an old lightbulb. That first fight with Jack Sparrow and Will Turner in the blacksmith workshop is dark. I mean it’s supposed to be shadowy, but wuff.

This disc hit my porch on December 24th and I was eager to dive into it to have a review cranked out right away, but after my first reactions, I felt the need to check this on multiple setups to make sure I wasn’t just being overly critical. But between my primary review setup, my decent but not reference quality office setup, and my father’s more average-joe consumer setup - it’s just not impressive. There are moments where it looks great, but a lot of unnecessary tinkering holds this one back and as a high-profile title this is sadly tough not to recommend you just stick with the old Blu-ray. 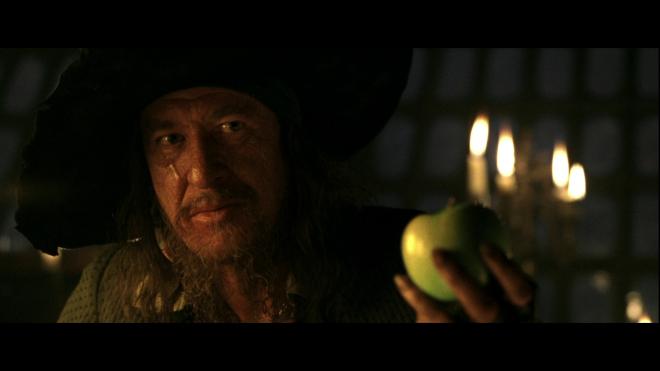 Offering a little bit of a more notable improvement is the new Atmos mix. And yes, I did have to boost my levels a little but nothing as severe as past Disney Atmos tracks. The only track on this set is the Dolby Atmos with Dolby TrueHD 7.1 default - no legacy 5.1 track is on this disc. Flipping between releases and the Disney+ presentation, this Atmos is a bit better, more forceful, and overall a more impactful experience with dialog, soundtrack, and surround effects elements. My gripe with this track is that it doesn’t feel like the height channels were well used, if at all. Aside from giving a little more spacing, there isn’t much of any dynamic pinpoint activity to single out. To be fair, it's a decent mix overall and works well but it's another oddly soft track that needs to be compensated with a kick in the levels. 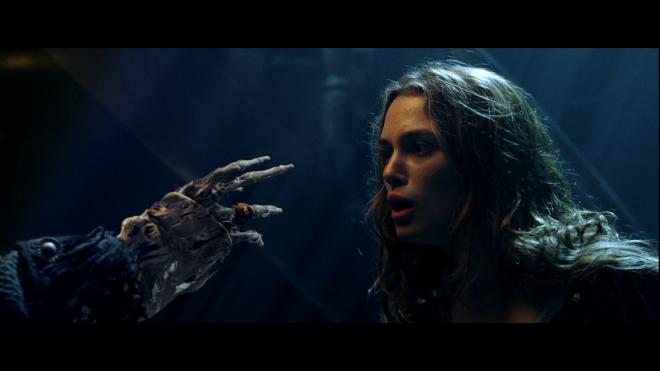 Bonus features are also a dodge on this release. The 4K disc holds no extra features of any kind. The only bonus features are found on the included 2007 Blu-ray disc - and then we don’t get all of the extras from past releases. 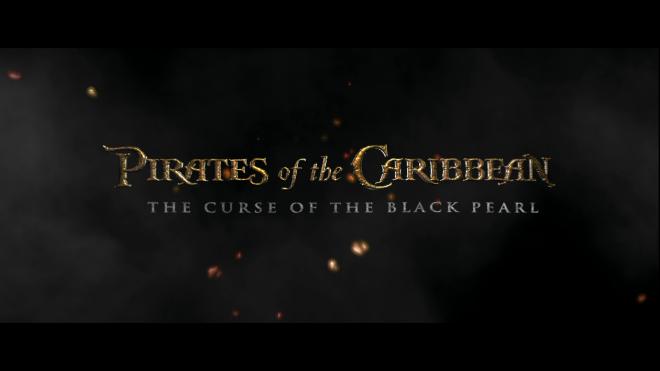 As a highly anticipated catalog release from the House of Mouse, Pirates of the Caribbean remains a fan favorite that still holds up nearly 20 years later. However, as a 4K Ultra HD Blu-ray release, it’s honestly a disappointment. Certainly not the worst example the format has ever seen, but for a high-demand title, it deserves far better than the lackluster A/V presentation we’re pitched into the drink with. Considering all films are on Disney+ if you’ve subscribed it’s a fair example of how this movie looks while how marginally better the sequels Dead Man’s Chest and At World’s End look.

Now some foreign market territories (so far only Australia) are getting full franchise collections in 4K where we’re getting stuck with just the first film. And to be honest, if this is the only film of this franchise you like, I guess that’s fine. But in all honesty, my call is if you’re aiming to get all of the sequels, skip this one and wait until they deliver a full franchise collection here stateside or import that set. On its own, the film itself is wonderful, but this strained HDR10 transfer and decent but unimpressive Atmos mix sadly mark this disc as the first whiffed release of 2022. At best, it’s Worth A Look if this is the only entry you want. If you’re hunting for the sequels in 4K as well - skip it for now.