After languishing on DVD for ages, Paul Morrissey’s iconic bawdy horror-comedy Flesh for Frankenstein has been fully resurrected on 4K Ultra HD and 3D Blu-ray thanks to the perfect partnership of Vinegar Syndrome and 3-D Film Archive. Starring Udo Kier, Arno Jürging, and Monique van Vooren, the film’s over-the-top script, visuals, and plot is a treat for genre fans. This exceptional release includes 2D 4K, 2D 1080p, Digital 3D, and Anaglyph 3D presentations, clean audio, and tons of great bonus features to pick through. For how loaded this release is, if this is your brand of entertainment it’s essential for the collection. Must Own

Note - at this time Vinegar Syndrome has pulled their releases to highlight their partner labels, when this is back up for sale on their website we'll let you know.

The secretive Baron Frankenstein (Udo Kier) and his deranged assistant Otto (Arno Jürging) are hard at work creating the perfect race by splicing together the limbs and organs of the dead. By creating the ideal woman (Dalila Di Lazzaro) and the ideal man (Srdjan Zelenovic), Frankenstein dreams of a new race of perfect children under his complete control. But as his unfulfilled sister/wife Katrin’s (Monique van Vooren) new “manservant” (Joe Dallesandro) recognizes the remains of the male zombie, Frankenstein’s dreams of a perfect race are in danger of becoming unstitched!

Paul Morrissey hit a hell of a stride at the right time. With 1973’s Flesh for Frankenstein and 1974’s Blood for Dracula, you have the perfect bawdy horror/comedy double feature. Too goofy to be scary and too silly to be genuinely sexy, these films feature ample exposed flesh with a cascade of amazingly over-the-top gore effects. They’re an amusement park ride of adult entertainment. Both films feature ridiculous scripts with insane dialog and joyously exaggerated performances with a top-notch cast. After years away from both films we now have them on 4K Ultra HD Blu-ray (and 3-D for Frankenstein), and we can enjoy them in all their glory. 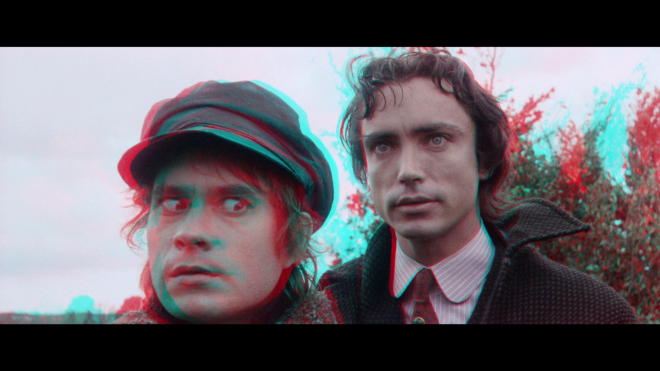 Once again we see the always great Udo Kier anchoring this film together with another amazingly manic performance. He gives it everything he has in every shot. If his limbs can’t manage his expressive nature, he dials up the decibel level with each line read. I swear he goes minutes at a time without blinking, merely opening his eyes wider and wider until they’re ready to pop out of his head. Speaking of wild eyes, just like Blood for Dracula, Arno Jürging is right at Udo’s side as the goofily ghastly Otto. How these two didn’t keep making more monster movies together is beyond me. Like Christopher Lee and Peter Cushing, an entire subsection of Horror should be dedicated to the appearances of these two great actors sharing the screen together. Then we get another oddly wonderful performance from Joe Dallesandro as our hero who honestly doesn’t seem like he actually gives a shit until it’s absolutely necessary.

Now, if you can only watch one of these Paul Morrissey monster movies, I have to tip my hat to Flesh for Frankenstein ever so slightly. Don’t get me wrong, Blood for Dracula is amazing too so it's a tough choice - but this one just hit my brand better and I think that’s in large part because I’m an admitted junky for three-dimensional entertainment. While this film works well enough in 2D, it’s the exceptional 3-D camera work that really makes it grand. Cinematographer Luigi Kuveiller’s knack for color and staging lends to some ghastly entertaining 3-D gags. Between Frankenstein and Otto working on creating their “Zombies” to some frank shots of rear ends to one actor’s near-Shakespearing final monologue before their death - this film is a visual feast! 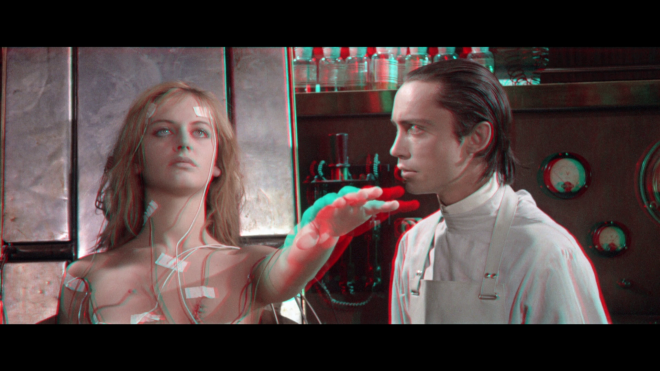 Oh so many years ago, I kicked my ass for not grabbing up the Criterion Collection DVDs of Blood for Dracula and Flesh for Frankenstein before the Hollywood Video I worked at closed. Now we have both films not only fully restored but in 4K Ultra HD Blu-ray. It’s been a damn good year for genre releases on the format and for labels like Severin and Vinegar Syndrom giving it their all to bring these classics back to life as they’re meant to be seen. So much great entertainment and not nearly enough waking hours in the day to appreciate them all. 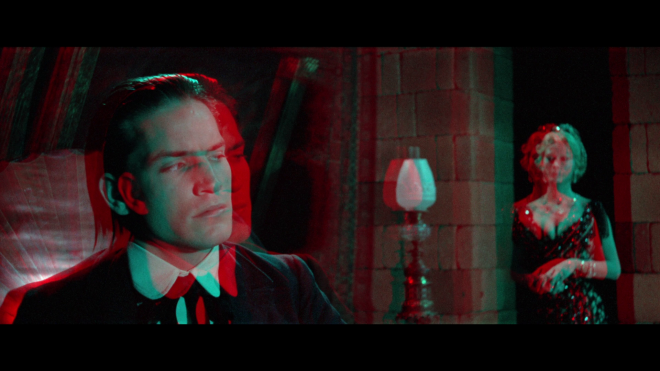 Vital Disc Stats: The 4K Ultra HD Blu-ray
Flesh for Frankenstein is given new life on home video with an impressive 3-Disc 4K Ultra HD Blu-ray + Blu-ray + 3D Blu-ray release. The 4K UHD and SDR Blu-ray are housed in a standard black keepcase with slipcover and reversible insert art. The 3-D Blu-ray gets its own clear keepcase with slipcover, reversible insert artwork, and two pairs of branded Anaglyph 3-D glasses. Both sets are housed in a sturdy slipcase replicating the original fleshy theatrical poster artwork. All discs load to animated main menus - the 3-D Blu-ray loads to an Anaglyph 3-D menu. 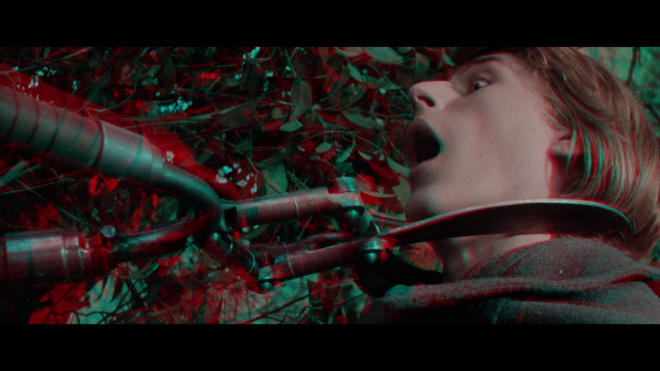 Flesh for Frankenstein is given essentially four 2.35:1 transfers with this release. An excellent 2-D 4K UHD HDR10 transfer, a solid 2-D 1080p transfer, an amazing 1080p Stereoscopic 3-D transfer, and an impressive Anaglyph 3-D presentation. In all honesty, it’s dealer’s choice - each transfer is uniformly excellent.

The native 4K HDR10 transfer boasts exquisite details with a rich film-like appearance. Film grain is left intact and never really appears overly noisy or distracting. Facial features, clothing, scenic filming locations, and some particular anatomical appendages all make grand appearances. Most impressive for me was the gore effects and how detailed all of the organs and obviously fake limbs looked. Frankenstein’s lab is particularly notable in that regard. And with the film originally being shot in 3-D there is a lot of prolonged focus on specific foreground objects - but even in this 2-D 4K UHD presentation, there’s an excellent sense of depth to the image that's more notable than the accompanying 2-D 1080p transfer. 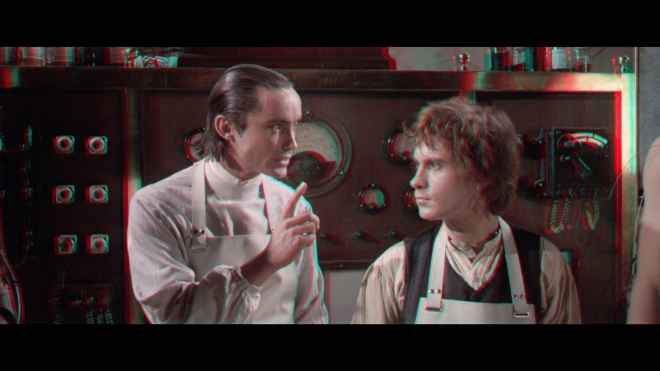 HDR10 work is strong highlighting the wonderful pallet of colors with bold reds, blues, yellows with crisp bright whites, and deep blacks. If there’s one slight drawback it’s that in some shots - namely when Frankenstein and Otto are putting new organs in the female monster their skin tones are a bit too flushed and almost orange - but they appear that way in 2-D as well but not to that extreme. There are several instances of this with various characters just appearing very red-faced that is more pronounced with HDR to the point of being somewhat notably oversaturated. That’s really the lone drawback to this presentation. Some slight speckling appears here and there and occasionally a hair that that was caught in the gate pops up but nothing serious or distracting. 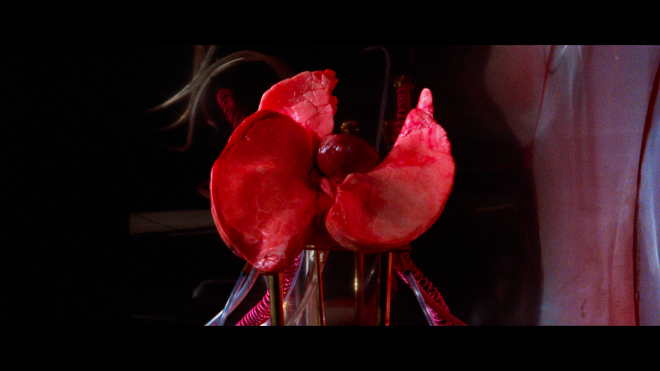 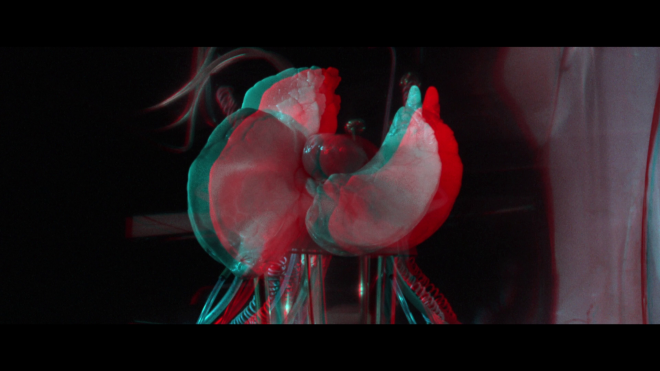 Now thanks to the always talented team at 3-D Film Archive, we get to enjoy Flesh for Frankenstein as it’s meant to be seen in glorious Digital Stereoscopic 3-D. For those still equipped with a 3-D television or projector - this transfer is simply magnificent. The only iffy patch was the opening credits, but after that, every scene is pure 3-D glory with deep z-axis depth and amazing protrusion effects that fly out of the screen without causing any ghosting effects or eyestrain. Again, the final monologue of one particular character at the end is incredible! Helping these 3-D gags is how long the camera holds on them so you can fully appreciate the squishy bits coming out of the screen! Also thanks to 3-D Film Archive - there is an excellent Red/Blue Anaglyph transfer. I don’t normally like Anaglyph 3-D, it’s tough on my eyes, but this was smooth and strain-free. The only drawback of course is the lack of true color replication - but you do get an amazing 3-D experience to fully enjoy this film with and that's why I stack even the Anaglyph presentation above the flat 2-D 1080p transfer. Here’s how I’d rate the individual presentations:
4K Ultra HD 2D - 4.5/5
1080p 2D - 4.5/5
1080p 3D - 5/5
Anaglyph 3D - 4.5/5 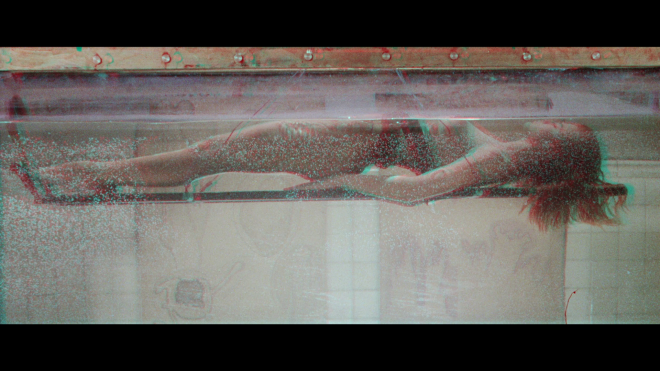 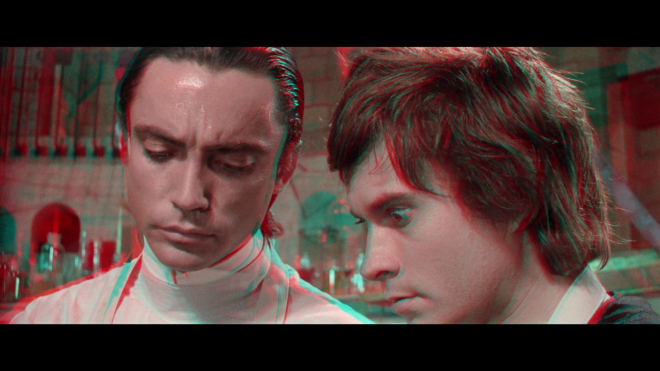 Each presentation of the film is given a clean and energetic DTS-HD MA 2.0 mono track. Dialog is clean and clear and not an issue. Some of Udo Kier’s reads are a little thick given his accent - especially when he’s in a manic state, but otherwise no problem there. The scoring is effective giving a nice sense of mood the film. Atmospherics and sound effects are well-rendered giving a sense of space and dimension to various locations. Frankenstein’s laboratory has the right amount of echo where other locations in the house are nicely confined and claustrophobic feeling. All in all a great mix for this film. 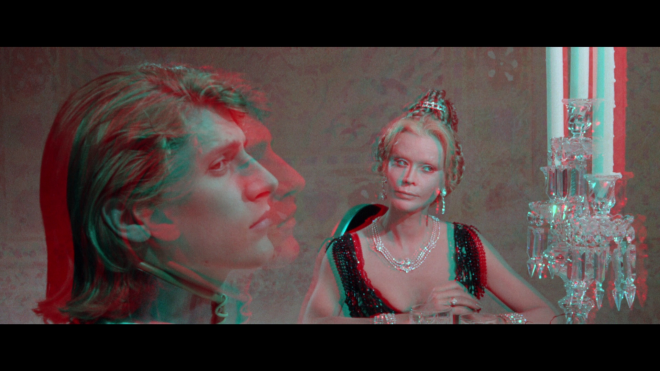 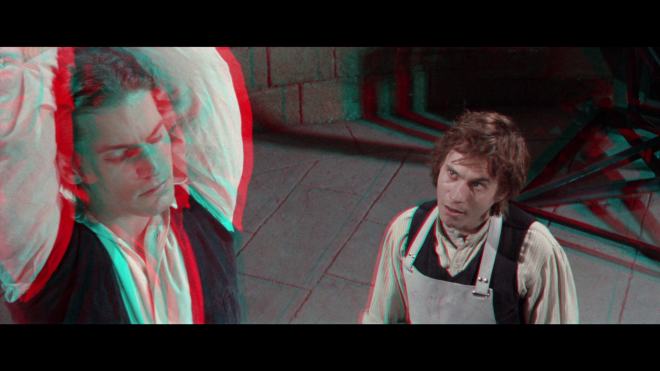 Not to leave anything on the table, Vinegar Syndrome really stretched to bring fans an impressive wealth of bonus features to pick through. The audio commentary is a great listen but I really got a kick out of the cast and crew interviews - particularly Udo Kier and Joe Dallesandro who recount their youth and inexperience on the project with some great bits about working with Paul Morrissey. Then you get a bunch of archival interviews with Morrisey on top of all of the new interviews. It's a great collection of materials to work through. Only the Audio Commentary appears on the 4K disc, all of the other bonus features are found on the 2-D 1080p Blu-ray disc. 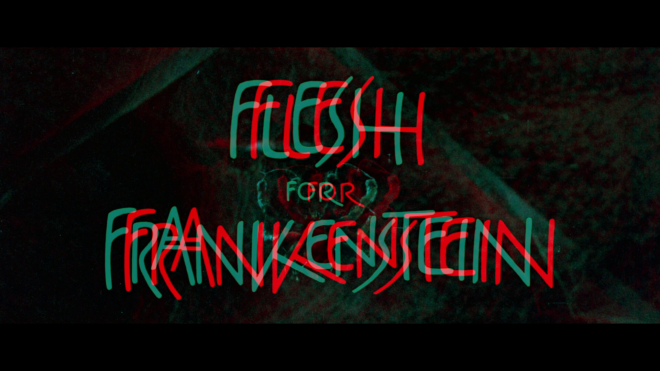 I love Flesh for Frankenstein - but then I’m also a big fan of Blood for Dracula and that whole subgenre of goofy sexually charged Horror/Comedies. Paul Morrissey’s monster movies with Udo Kier are such delightfully entertaining movies it’s hard for me to find fault with them. Sure they can be a little amateurish with some of the cast of unseasoned performers - but who cares? That’s just more flavor for this rich stew of Horror/Comedy delights.

Vinegar Syndrome delivers an exceptional three-disc release of Flesh for Frankenstein. Complete with an excellent 4K Ultra HD HDR10 presentation, Vinegar Syndrome once again teamed up with 3-D Film Archive to deliver one of the very best Digital Stereoscopic 3-D presentations on disc along with another fantastic anaglyph transfer with hours of new and archival bonus features to check out. If this is your particular brand of entertainment - this release of Flesh for Frankenstein is an essential addition to the collection. Must Own.