The streaming TV platform is rolling out a new DVR feature.

Sling TV has announced plans to launch a Cloud DVR beta program. The beta will initially be available on Roku streaming players and Roku TVs in December.

As part of the Cloud DVR beta, eligible customers will receive 100 hours of free cloud DVR storage, allowing them to record their favorite shows and movies on the Sling TV service. Here's a rundown of key features per the press release:

• Entertainment on your time – Record movies, episodes, full series and more and watch the TV you want whenever is best for you. You'll also be able to pause, rewind or fast-forward your recorded content. DVR functionality not available on all channels.
• Conflict-free recording – Users may record multiple programs simultaneously, with no recording conflicts.
• Easy access – Your DVR content will be integrated directly into your “My TV” screen, so you can get to your recordings easily and quickly.
• Simple space management – Just sit back and relax! We’ll automatically manage your DVR space to make room for new recordings by deleting the oldest ‘watched’ recording when capacity is full, so you don’t have to! 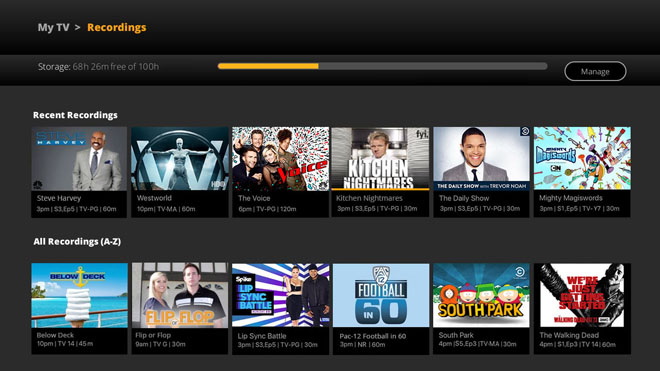 Sling TV users who subscribe to Sling Orange and/or Sling Blue using a Roku device can now request an invitation to the Cloud DVR beta program by visiting www.sling.com/dvr.