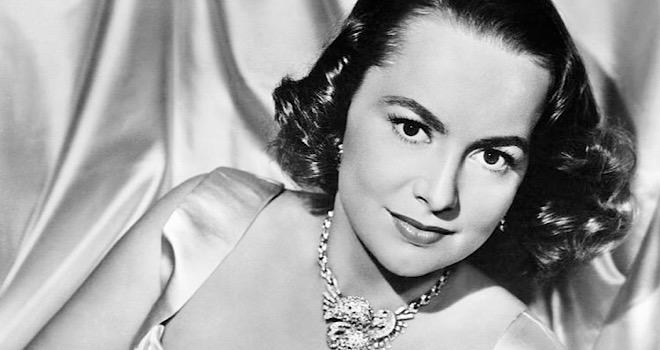 For a time, it seemed like Olivia de Havilland might live forever...and through her gallery of indelible performances in an array of classic films, she will. The gallant, gracious, and beloved star of such wonderful films as Gone with the Wind, The Heiress, and The Adventures of Robin Hood died July 25 at her home in Paris at the grand old age of 104. Along with screen legend Kirk Douglas, who also passed away this year at age 103, she was the last gleaming light and surviving giant of Hollywood's storied Golden Age, a two-time Best Actress Oscar winner and five-time nominee whose boundless talent and breathtaking beauty enlivened more than 60 movies over the course of an enviable career that spanned half a century.

De Havilland was born in Tokyo to British parents, but became an American icon. She made her film debut in 1935 at age 19 and became an instant star. De Havilland made eight pictures with the dashing Errol Flynn between 1935 and 1941, portrayed Melanie Hamilton Wilkes to great acclaim in Gone with the Wind in 1939, and over the next several decades co-starred with such accomplished actors as James Cagney, Bette Davis, Charles Boyer, Henry Fonda, Montgomery Clift, Richard Burton, and Ray Milland.

In 1943, she won a historic legal victory, effectively freeing actors from being forced to make up time spent on suspension at the end of their contracts. The "De Havilland Law," which forever changed the Hollywood studio system, is still in effect today and stands as arguably the actress's greatest contribution to her industry. Gossip-mongers had a field day over her decades-long feud with her equally famous sister Joan Fontaine, but the regal, refined De Havilland always rose above such tabloid fodder, and as her Golden Age compatriots began to pass away one by one over the past 30 years, she became the enduring ambassador and grande dame of a bygone era defined by glamor, myth, and magic.

De Havilland always will be ranked as one of cinema's greatest actresses, and her portrayals of strong, vibrant, dimensional women resonate with truth and remain timeless. The following list contains 10 films in chronological order that best represent her talent and versatility and stand as shining examples of the beauty, strength, elegance, grit, vivacity, and warmth that define Olivia De Havilland, a woman every movie fan will forever hold in high regard and deeply miss.

The Adventures of Robin Hood (1938) - Of all the movies in which she co-starred with Errol Flynn, this quintessential swashbuckler directed by Michael Curtiz earns the highest marks. De Havilland is a vision of loveliness as the fresh-faced Maid Marian. Her role is largely ornamental, but in glorious three-strip Technicolor, who cares?

Gone with the Wind (1939) - Melanie Hamilton Wilkes may be a Plain Jane by Hollywood glamor standards, but her inner beauty and enviable strength - and De Havilland's marvelous portrayal - make her a luminous presence in David O. Selznick's sweeping adaptation of Margaret Mitchell's saga of the Old South. As the patient, adoring wife of Leslie Howard's noble yet weak Ashley and devoted friend to Vivien Leigh's selfish Scarlett O'Hara, De Havilland proved she was an actress to be reckoned with and much more than a pretty face. She also garnered a well-deserved supporting Oscar nomination, but (rightfully) lost to her castmate Hattie McDaniel.

Hold Back the Dawn (1941) - De Havilland received her first Best Actress Oscar nomination (and lost to her sister) for this literate, nuanced romantic drama about an unscrupulous Romanian expatriate (Charles Boyer) who manipulates a naive American schoolteacher (De Havilland) into marriage so he can obtain entry into the U.S. Directed by Mitchell Leisen and written by Billy Wilder and Charles Brackett, Hold the Back Dawn is an underrated gem filled with emotion and substance. It's also surprisingly timely, given the tensions swirling about U.S. immigration issues today.

The Dark Mirror (1946) - Playing twins is both a challenge and a hoot for many actresses, and De Havilland makes the most of her chance in this noirish Freudian murder mystery that received an Oscar nomination for its original story. Directed by Robert Siodmak (The Spiral Staircase) and written by Nunnally Johnson (The Three Faces of Eve), the film showcases De Havilland's versatility and builds to a stunning climax.

To Each His Own (1946) - Though it's all too easy to dismiss this story of unrequited mother love as shameless soap opera, De Havilland's measured, heart-wrenching portrayal diffuses the melodrama and lends authenticity to the tale of a woman who gives up her illegitimate son and becomes a shadowy figure on the periphery of his life. To Each His Own was De Havilland's first film following a two-year period of inactivity resulting from an industry backlash after her historic court victory, and she justly earned her first Best Actress Oscar for her bravura performance. Amazingly, To Each His Own has never been released on Blu-ray; hopefully, Paramount will right that wrong soon.

The Snake Pit (1948) - De Havilland nabbed another Oscar nod for her riveting, highly believable portrayal of a mentally disturbed woman who must endure harrowing treatments and painful therapy sessions during her turbulent stay in a state psychiatric hospital. Director Anatole Litvak's drama was one of a series of social issue films in the late 1940s that tackled taboo topics with sensitivity and insight.

My Cousin Rachel (1952) - Is she or isn't she? This brooding, atmospheric adaptation of Daphne du Maurier's gothic novel casts De Havilland as an English lord's mysterious widow who might be both a greedy opportunist and ruthless murderess. A young Richard Burton co-stars as the dead lord's impetuous heir, who's either the love of Rachel's life or her next victim. De Havilland doesn't give away much in a fascinating performance that will keep you guessing...even after the movie ends.

Light in the Piazza (1962) - De Havilland gives an empathetic performance as the concerned mother of a mentally challenged young woman (Yvette Mimieux) who falls in love with a dashing Italian (George Hamilton) while vacatoning in Florence. Director Guy Green's delicate drama, which was adapted into a successful Broadway musical in 2005, features gorgeous Italian locations and addresses important issues. Hopefully, along with To Each His Own, it will see a Blu-ray release in the not-too-distant future.

Hush...Hush, Sweet Charlotte (1964) - Guilty pleasures don't get much guiltier (or provoke more pleasure) than this captivating bit of Grand Guignol melodrama that casts De Havilland as the duplicitous cousin of a deranged woman (Bette Davis) who's haunted by the brutal murder of her lover 35 years ago. De Havilland rarely played bitches, but she's a humdinger of one here, and recites every deliciously nasty line with relish. Packed with plot twists and scenery-chewing performances galore, Hush...Hush, Sweet Charlotte is a ghoulishly good thriller that elevates camp to high art.