'Band of the Hand' Blu-ray Dated for January

In an early announcement to retailers, Mill Creek Entertainment is preparing 'Band of the Hand' for Blu-ray on January 10.

Welcome to the jungle, Miami-style, where fast cars, dirty deals, hot women, and acid-washed jeans all come with the turf. While serving time in a grueling rehab program in Florida's Everglades, five young felons bond together to form an unlikely union. When they return to Miami's dangerous ghetto, the five former criminals wage a lethal war on the drug kingpins who rule the underworld of murder and mayhem. BAND OF THE HAND goes for the jugular, never once loosening its grip until its heart-stopping climax!

Specs, supplements, and a suggested list price for the Blu-ray have not been announced yet.

You can find the latest specs for 'Band of the Hand' linked from our Blu-ray Release Schedule, where it's indexed under January 10. 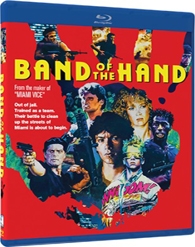 Discs mentioned in this article: (Click for specs and reviews)
Band of the Hand (Blu-ray)