I have a lot of favorite movies, but do I watch them all once a year? Not a chance. And yet somehow I make time every holiday season to cozy up to a handful of classic yuletide films. There's just something warm and comforting about revisiting these iconic motion pictures, all of which transmit the same timeless messages of hope, kinship, and joy. Between 1927 and 1970, Hollywood produced enough Christmas movies to fill Santa's sack a few times over. Not all stand the test of time, but after much consideration, High-Def Digest has compiled a Top 10 List of holiday classics that are readily available on Blu-ray and well worth an annual spin. Whether tuneful or tear-jerking, comic or romantic, all of them are perennial favorites. So pour the hot chocolate (or maybe a brandy), light the fire, grab a blanket, and enjoy these highly recommended seasonal discs. It just won't be Christmas without them. 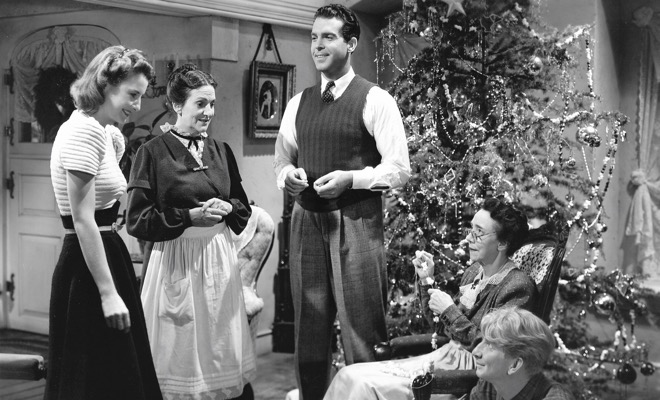 Arguably the most obscure title on this list, 'Remember the Night' is a little-known, understated gem. Written by Preston Sturges, who masterfully mixes comedy, romance, and pathos, and delicately directed by Mitchell Leisen, this affecting trifle focuses on a suspected shoplifter (Barbara Stanwyck) who's given a Christmas furlough by a guilt-ridden D.A. (Fred MacMurray) who can't bear to see her stuck in jail over the holidays. The two travel to his mother's Indiana home, where the cynical, street-wise dame experiences first-hand the type of close-knit family life that has eluded her. Over the course of a few days, they grow close, but what happens after Christmas is over and he's forced to prosecute her? Though some of the comedy is a bit dated, the intimacy and warmth remain palpable, thanks to the sensitive performances of Stanwyck, MacMurray, Beulah Bondi, and a first-rate supporting cast. As I wrote in my review of the film, "the best things come in small packages, and 'Remember the Night' is a winsome holiday surprise - unassuming in presentation, yet strangely wondrous." 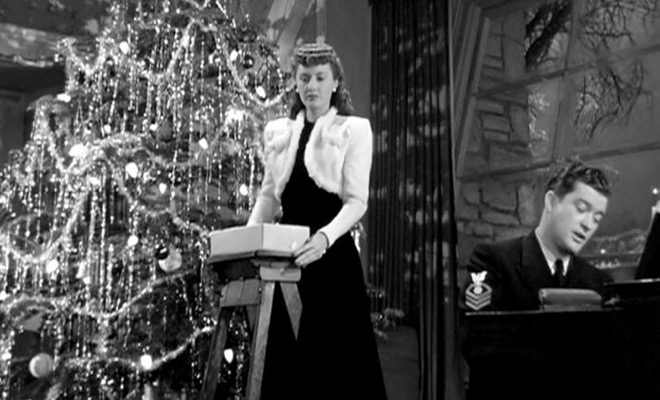 Five years after 'Remember the Night,' Stanwyck made another Christmas picture with a higher profile. In this breezy, World War II-era romantic romp she plays a Martha Stewart-like domestic diva who's roped into hosting a serviceman on leave over the holidays. The only problem is her finely crafted persona is a total sham (she can't even fry an egg!), and if her publisher gets wind of her deception, she'll be fired. What ensues is a madcap Christmas packed with countless complications that conspire to unmask her, not the least of which is her burgeoning affection for the GI (Dennis Morgan) who buys her phony act hook, line, and sinker. An adept comedienne, Stanwyck shines in an energetic portrayal, and she receives priceless support from Sydney Greenstreet, S.Z. Sakall, and Reginald Gardiner. A few laugh-out-loud lines and lovely chemistry between Stanwyck and Morgan make this chipper rom com a fun diversion for the whole family. 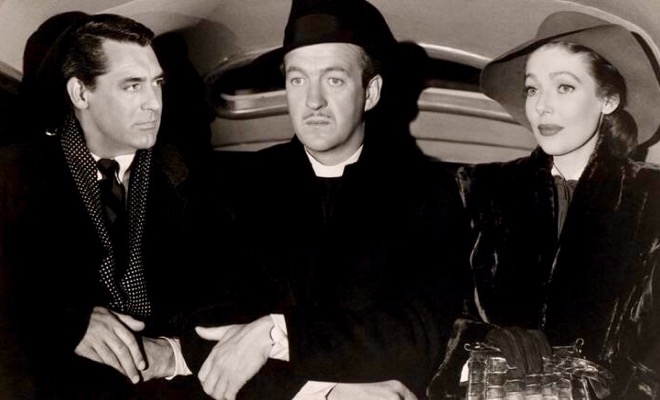 Though Hollywood's most famous guardian angel will be properly saluted in a subsequent entry in this list, Dudley, a do-right spirit played by a dapper Cary Grant, checks in at #2. He spontaneously appears during the Christmas season to help Henry (David Niven), a beleaguered minister, and his put-upon wife, Julia (Loretta Young), who fears her husband's preoccupation with building a cathedral is destroying their marriage. As pressures mount, Julia grows closer to Dudley (who she believes to be human), which sends Henry into a jealous pique. This charming fantasy deftly explores this odd triangle with gentle humor and honest emotion, blending romance with inspiration as Dudley enlightens not only Henry and Julia, but also others in their intimate circle. Shot with ethereal grace and punctuated by fine performances, 'The Bishop's Wife' is a heartwarming tale that's simple and meaningful. 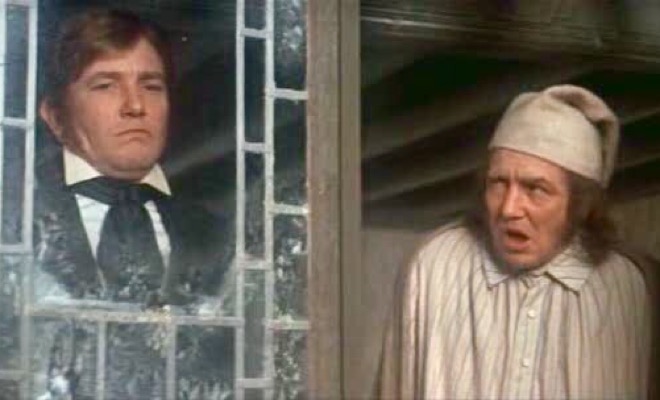 Albert Finney was only 34 years old when he tackled the venerable role of Ebenezer Scrooge in this musical version of Charles Dickens' classic 'A Christmas Carol,' but he nails the part, embracing the legendary miser's bitter loneliness, sour attitude, and - at last - giddy delight after he's redeemed by a trio of spirits one spooky Christmas Eve in Victorian London. Unlike other interpretations of Scrooge, Finney plays the character as both a young man and aged curmudgeon (check out the picture below), and several memorable songs by Leslie Bricusse enhance the familiar story, both heightening its sense of loss and regret and infusing it with an infectious vim and vigor. Purists may occasionally cry foul, but 'Scrooge,' which features cameos by a gallery of Britain's finest actors, including Alec Guinness as Jacob Marley, is an unqualified delight that captivates the senses and warms the cockles of our hearts. 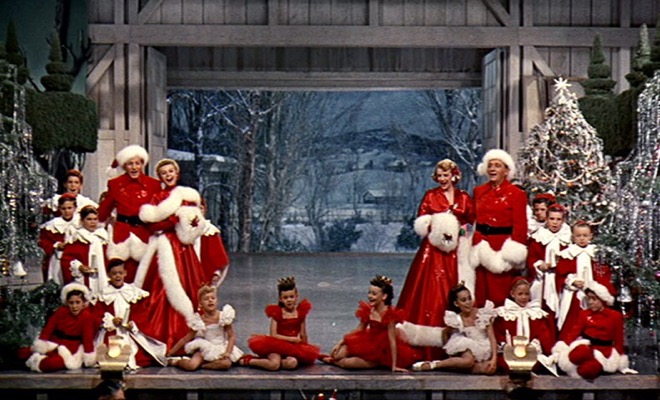 Packed to the gills with Irving Berlin tunes, including the iconic title song, spiked with terpsichore, and dressed to the nines with gorgeous Technicolor, 'White Christmas' is the type of splashy, sumptuous fare that painlessly injects everyone with a jolt of holiday spirit. Bing Crosby, Danny Kaye, Vera-Ellen, and Rosemary Clooney make a winning quartet, singing and dancing to more than a dozen Berlin standards as they mount a stage show designed to save the struggling Vermont inn of a crusty Army general (Dean Jagger) who's fallen on hard times. Snappy dialogue, eye-popping production numbers, and a sprinkling of sentiment keep the film's engine humming, and a Crosby-Kaye drag duet of 'Sisters' is a definite comic highlight. No matter how many times you see it, it's impossible not to dream of a white Christmas after seeing this festive, entertaining film. 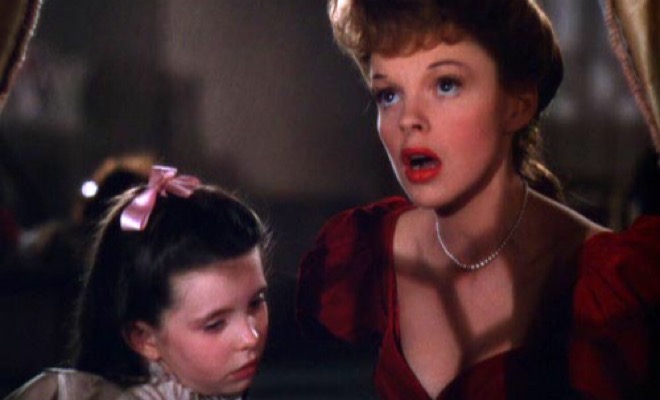 Only a third of this wonderful Technicolor musical takes place at Christmas, but the sequence is so memorable, it makes an indelible impression. Countless singers have recorded 'Have Yourself a Merry Little Christmas,' but the incomparable Judy Garland introduces it here, wistfully singing it to a weepy Margaret O'Brien, and hers is the definitive version. This year-in-the-life chronicle of the generically named Smiths, who eagerly anticipate the 1904 World's Fair, is oh-so-identifiable as it addresses the simple yet timeless issues of home, faith, and the ties that bind, while perfectly depicting the dynamics of an average American family. Other great songs like 'The Boy Next Door' and 'The Trolley Song,' marvelous performances, and impeccable direction by Vincente Minnelli make this uplifting film appealing any season of the year, but especially around the holidays. 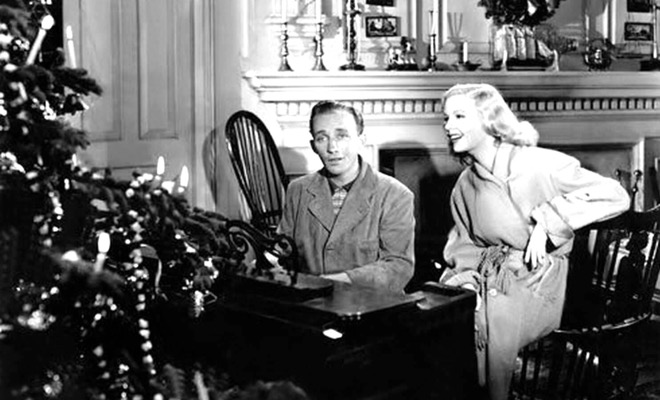 A dozen years before 'White Christmas,' Irving Berlin penned the song that would spawn that film, and Bing Crosby unforgettably introduces it in 'Holiday Inn.' The anthem became an instant classic and so did this sprightly movie about an inn that only opens on holidays and the rivalry between two men (Crosby and Fred Astaire) who love the same girl (Marjorie Reynolds). Great numbers abound, almost all of which are paired to various holidays throughout the year (Astaire's Fourth of July firecracker dance is a highlight), and plenty of comedy fuels the narrative, but it's the easygoing chemistry between Crosby and Astaire and that iconic shot of Bing crooning 'White Christmas' at the piano in front of a roaring fire that make this marvelous seasonal musical truly sing. 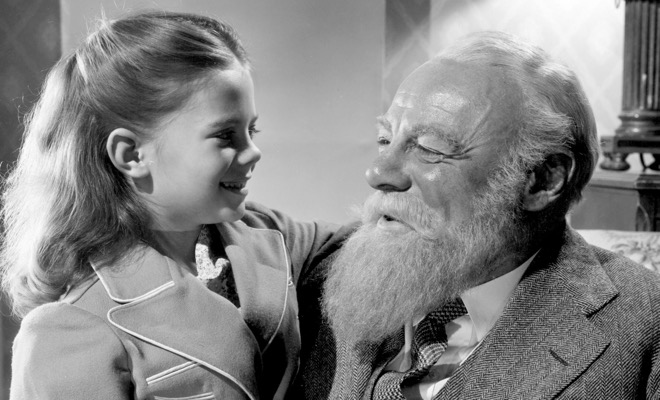 If you've ever doubted the existence of Santa Claus, 'Miracle on 34th Street' will make you believe all over again. Writer-director George Seaton's inspired and incisive script about a department store Santa (Edmund Gwenn) who swears he's the real Kris Kringle - and is willing to go to court to prove it - won an Oscar, and Gwenn was named Best Supporting Actor for his whimsical and endearing portrayal. A young Natalie Wood made a name for herself as the cynical child who tries to call his bluff and Maureen O'Hara files arguably her most memorable performance as her matter-of-fact mother who falls for the affable lawyer (John Payne) who takes up Santa's cause. Terrific supporting turns by Gene Lockhart, Jerome Cowan, William Frawley, and especially Thelma Ritter add extra zing to one of Hollywood's snappiest and most inventive holiday films. As I wrote in 2009, "Filled with humor, honest sentiment, and enough seasonal cheer to perk up Ebenezer Scrooge, this timeless classic…never gets stale." 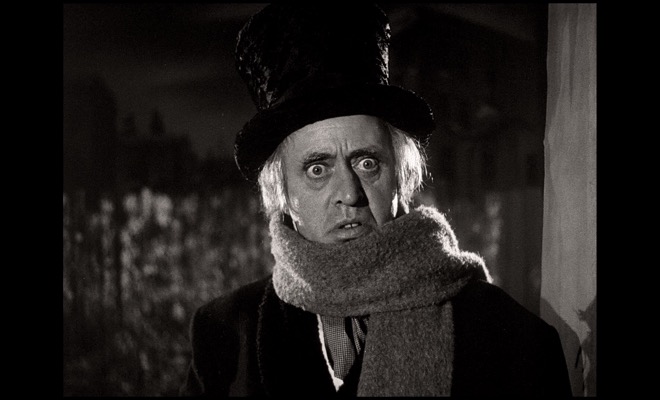 Charles Dickens' timeless Christmas ghost story has been filmed several times, but the best adaptation not surprisingly comes from the Brits. This version, which embraces the tale's dark elements and flaunts a deliciously creepy feel, strays a bit from the novel, but features the finest interpretation of its hero, that cantankerous Christmas killjoy, Ebenezer Scrooge. Alastair Sim spoils the role for anyone else with a performance that's both broad and understated, but he doesn't neglect the delicate shadings in between. His is a three-dimensional Scrooge, and his wildly expressive face aptly reflects the miser's gamut of emotions. The joyful climax overflows with yuletide cheer and is guaranteed to melt even the hardest heart. To paraphrase Tiny Tim, God bless this movie, everyone! 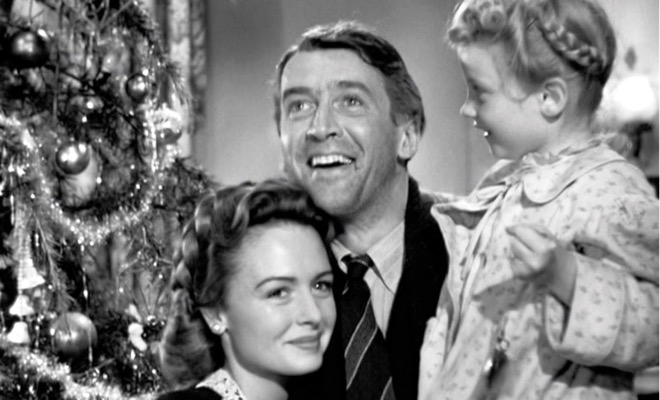 Few films make me cry like a baby EVERY TIME I see them, but Frank Capra's 'It's a Wonderful Life' never fails to evoke a visceral emotional response. James Stewart is brilliant as George Bailey, an unselfish man who sacrifices his dreams in the name of service and responsibility and remains devoted to his family despite more pressures and setbacks than anyone should have to bear. When at last he believes all hope is lost, he contemplates suicide, but just in the nick of time, a novice guardian angel named Clarence (Henry Travers) descends from heaven one fateful Christmas Eve to prove to George how important and meaningful his life has been. 'It's a Wonderful Life' has been copied and parodied to a fare-thee-well over the past 70 years, but it remains the quintessential Christmas movie because it celebrates the human spirit and shows how seemingly insignificant acts can profoundly affect others and even change the world. A fresh-faced Donna Reed, young Gloria Grahame, and gallery of fine character actors, including Lionel Barrymore, Thomas Mitchell, H.B. Warner, and Beulah Bondi all make essential contributions to this inspirational tale that seamlessly blends comedy, drama, romance, and fantasy. Though it wasn't very successful at the time of its release, 'It's a Wonderful Life' has grown in stature exponentially over the years to become an indisputable classic and an annual holiday tradition for many families. It's our top Christmas film pick, and if by some chance you've never seen it, you're in for a treat. Just make sure you have the Kleenex handy.