An Introduction to HyperSound Clear, the Home Theater Tech Most Needed by Someone In Your Family

Because we all like to hear what we watch.

Consumer electronics have been and will continue to be, part of an industry built on hit products. There are products that catch fire overnight, and there are products that sneak in but prove to be indispensable. HyperSound technology has serious potential in the latter category -- the potential to be that one-way adoption product.

HyperSound technology is complex, but the concept can be related using the very easy 'Star Trek' method of simplification. HyperSound speakers (or really, emitters) create directed sound. As opposed to the traditional cone-shaped sound that expands conically as it travels, HyperSound emitters direct sound similar to how a flashlight directs a beam of light. For a listener in HyperSound's directed audio beam, there is sound. For listeners outside of the beam, there isn't sound.

After my first few demonstrations of HyperSound, I began to see the potential in the tech. In my case, I'd love to be able to use the speakers in my home office. As it is, when my significant other is around, I am often relegated to using a headset. (My office isn't sound proof, and neither is her adjoining home office.) With HyperSound in the mix, the idea that I could direct sound at my desk without bothering anyone not in the beam is altogether compelling. (Sure, there would likely be some sound bounce off of the walls, but nothing as intense as being in the beam.) 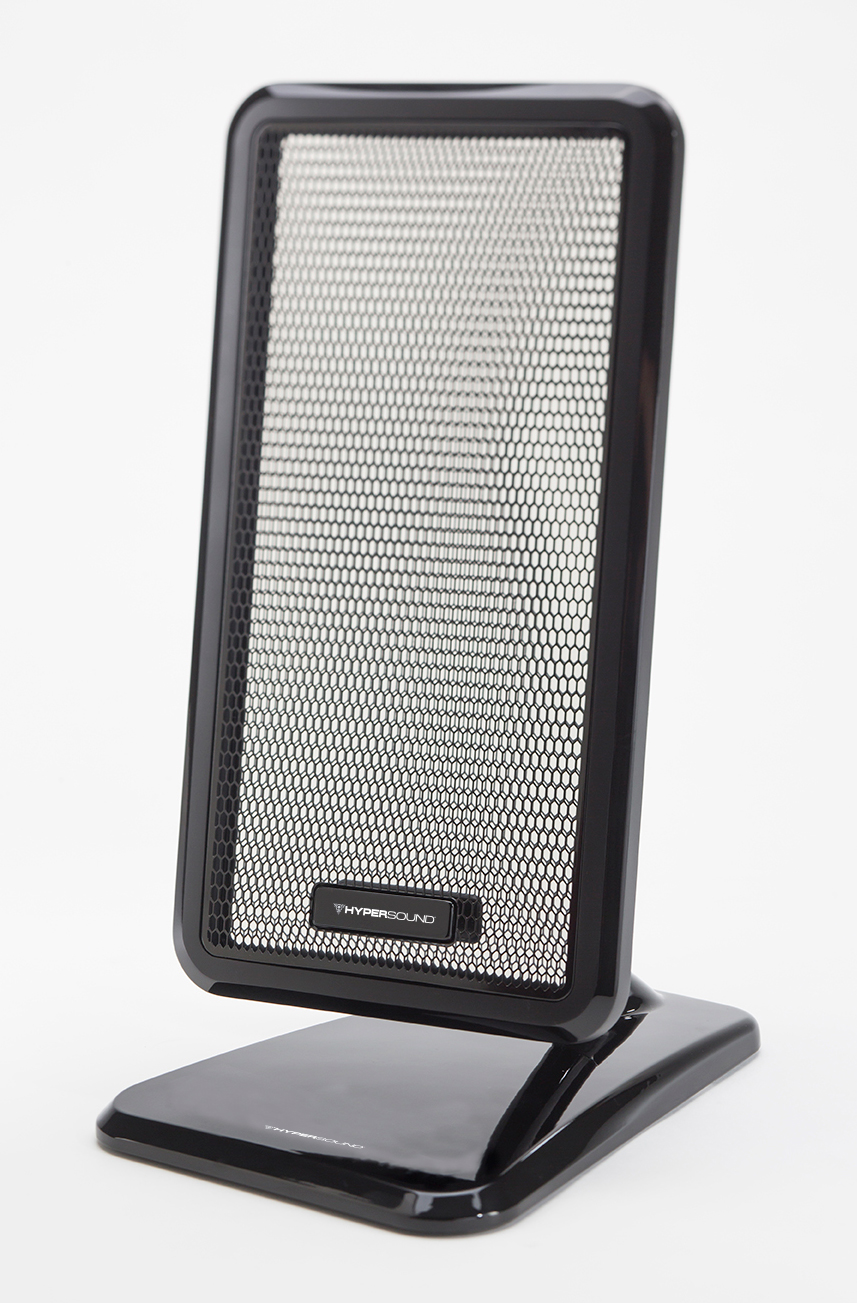 However, HyperSound as a home office product isn't ready yet, as that part of the tech is still on the drawing board. There is though, a commercial version of HyperSound directional audio already being used at retail for in-store kiosks inside of places like Best Buy. How do these HyperSound enabled kiosks work? Well, one need look no further than the 'Call of Duty' kiosks currently inside of Best Buy.

Say you're shopping at Best Buy, and you see the 'Call of Duty' video game kiosk at the end of a row. 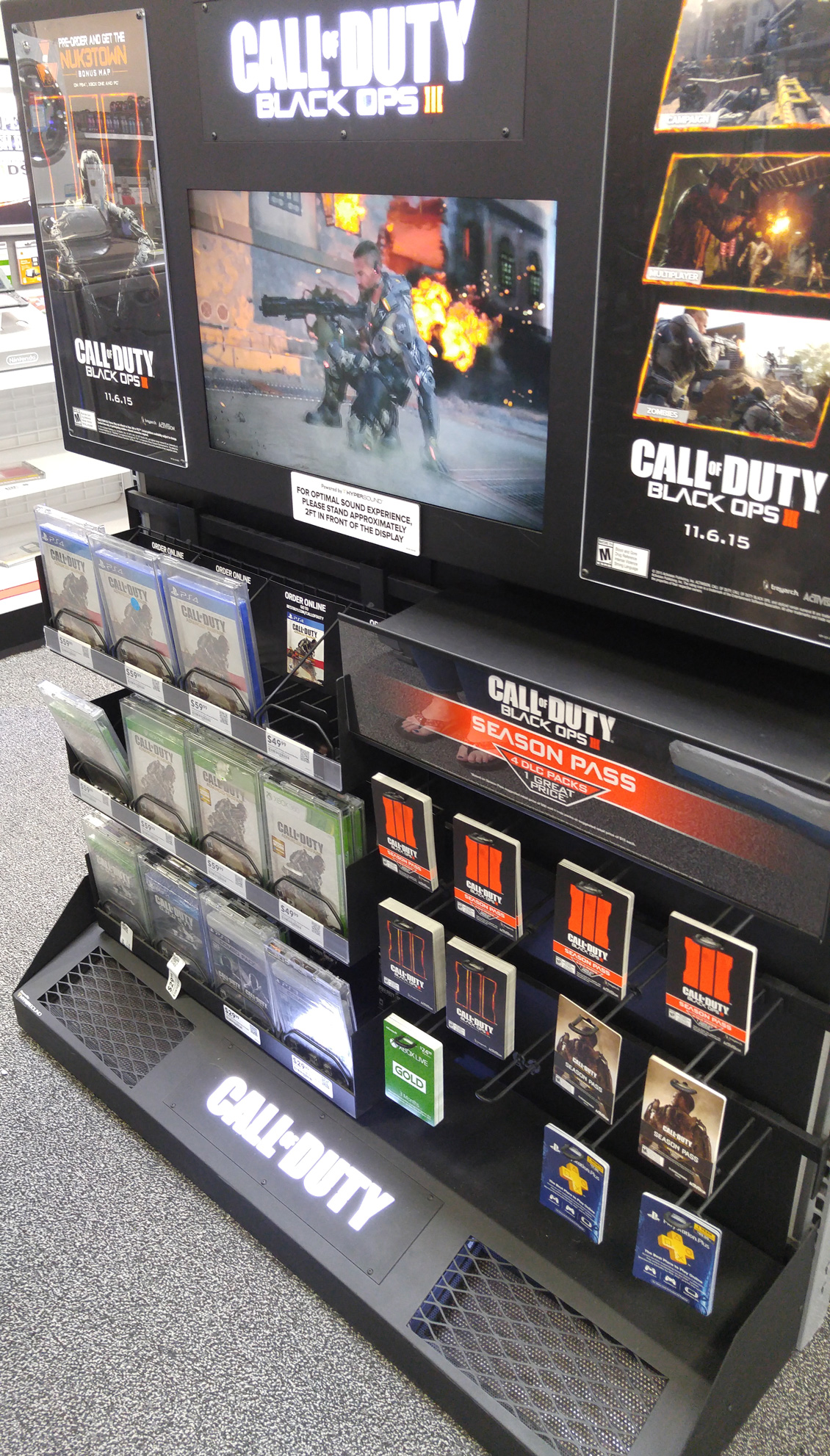 While you're standing in front of said 'Call of Duty' kiosk, you see a screen showcasing some of the game's prime gameplay trailers (right now, it is 'Call of Duty: Advanced Warfare'), with audio coming from HyperSound commercial emitters pointing at the person experiencing the game demo. (The emitters are near the ground and angled up.) But, once you walk past the 'Call of Duty' demo kiosk, you can't hear the audio anymore.

This allows for a retailer like Best Buy (or whomever) to have audio-enabled product demo kiosks that project audio at interested consumers without overwhelming other shoppers and the store with audio blaring all over the place. This hiding in plain sight technique has a cunning merit, and it's honestly impressive in person to be right next to the kiosk without any audio bleed. (According to a recent study conducted by the HyperSound team, this HyperSound and kiosk pairing is pretty effective, and shows a near 50% sales increase in a retail environment via HyperSound-enabled in-store signage and displays. That study can be found here.)

Of course, those kiosks aren't what has me so intrigued; I want to see HyperSound working inside the home office and home theater. I can see a future where directed sound speakers will allow me to use a home theater system even while guests sleep in the next room. Right now, I have to use headphones, but I suspect that will change eventually. In fact, it's that enthusiast space I'm imagining, that was the main focus when the original developer Parametric sound pitched the technology to Turtle Beach.

Parametric Sound originally pitched HyperSound to Turtle Beach with the goal of licensing the tech to them and leveraging Turtle Beach's audio muscle to create a gaming soundbar. In that same pitch meeting, Parametric also let Turtle Beach's CEO, Juergen Stark, know about another interesting finding – that HyperSound improved sound clarity and speech intelligibility for people with hearing loss (i.e. – With HyperSound connected to their TV, people with hearing loss could better hear and understand the TV again without having to turn the volume way up.).

So while HyperSound tech's future is bright for enthusiasts such as myself, Turtle Beach immediately saw significant potential for HyperSound Clear as a hearing healthcare device. Once Turtle Beach's CEO experienced Parametric's pitch/demo of HyperSound as a technology to help those with hearing loss, Turtle Beach began taking steps to not merely license HyperSound but to acquire it outright. Ultimately, Turtle Beach bought Parametric Sound in January 2014, and HyperSound is now a brand and business unit product of the Turtle Beach Corporation.

You see, Turtle Beach saw HyperSound as a difference maker, something that could improve the quality of life for people suffering from hearing loss. One potential user that immediately comes to mind is my mother.

Whenever I go to visit my mom's house, I'm typically greeted at the front door by the sound of the TV from across the house. My mother enjoys watching TV ('CSI,' 'Modern Family,' and whatnot) most of the time, but every year, she raises the volume. She also insists on having the TV in the corner of the room, which makes those TV speakers even more diffuse.

The trouble is multi-stage. She can't hear the dialog without cranking up the TV, but then it gets so loud that anyone else in the room or nearby rooms, can't hear anything else.

She does have a hearing aid, but she doesn't wear it when she's home. (Or really, when she's out, as she's still only in the beginning phases of notable hearing loss.) Unfortunately, I have to imagine that straining to hear dialog while cranking up the sound is a harmful dynamic that gets worse and worse. 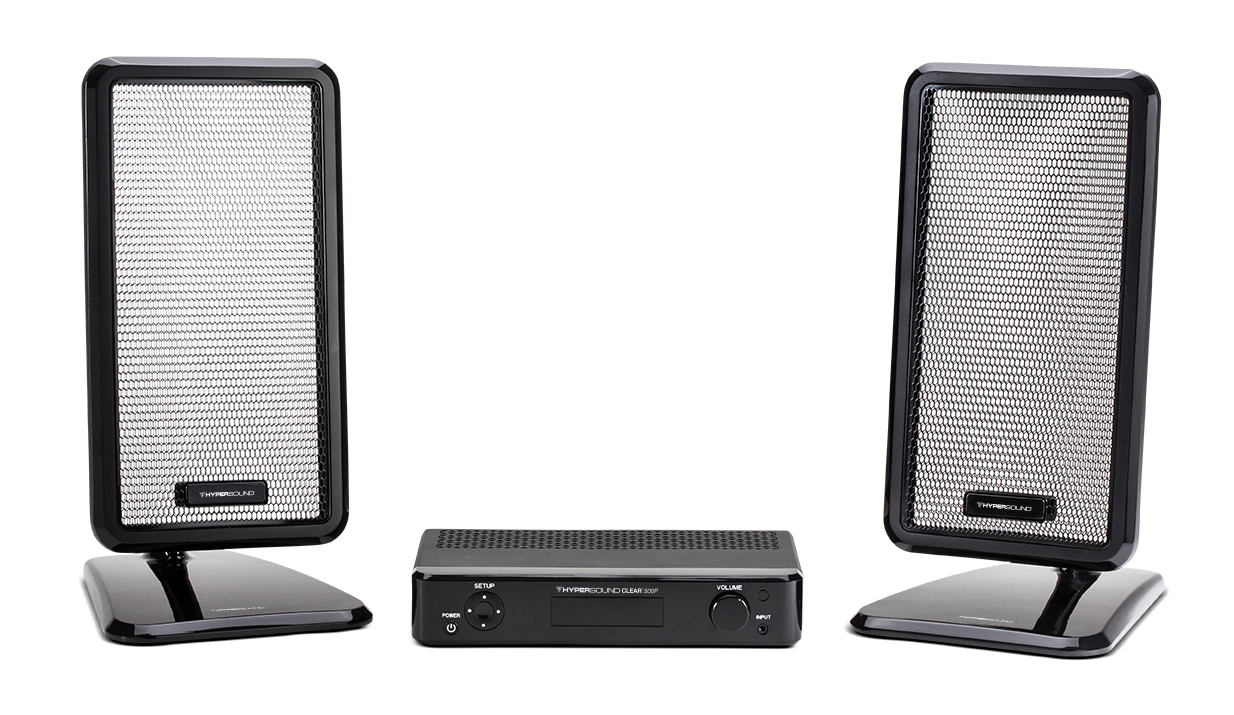 Which brings me to the first consumer HyperSound product, HyperSound Clear. It's a four piece product: two HyperSound emitters, a HyperSound amp, and a remote. The idea is that a listener, like my mother, has lost some hearing, and that's what's making TV dialog so hard to hear and understand. Early hearing loss is exhibited through the progressive loss of higher frequency sound, which unfortunately, is where peoples' voices reside.

For example, take the noisy setting of a busy restaurant. In such a setting I frequently cannot make out what someone sitting across the table from me is saying. Their voice is getting drowned out and lost against all the ambient background noise from the restaurant (i.e. – people talking, plates and silverware clanking, etc.). It's a similar situation when watching TV. As the user's hearing declines, they tend to turn the TV volume up to compensate. But the problem isn't one of volume, it's understanding what's being said on TV. The words are heard, but not understood clearly. An example related to me by Turtle Beach's MacLean Marshall compares this kind of unintelligible dialog with reading text. Just imagine that you are reading this paragraph, and every other letter of every word is missing. It's not that you can't see the paragraph, but with only bits and pieces to go on, it would become challenging to puzzle out the words.

Now, with HyperSound Clear connected to the TV (or home theater) and the HyperSound emitters pointed at the listener, the situation changes. Instead of cranking the TV volume towards the max, the formerly muddled dialog becomes clear via the HyperSound emitters, and that's without affecting anyone else in the room or resorting to crazy high volume. 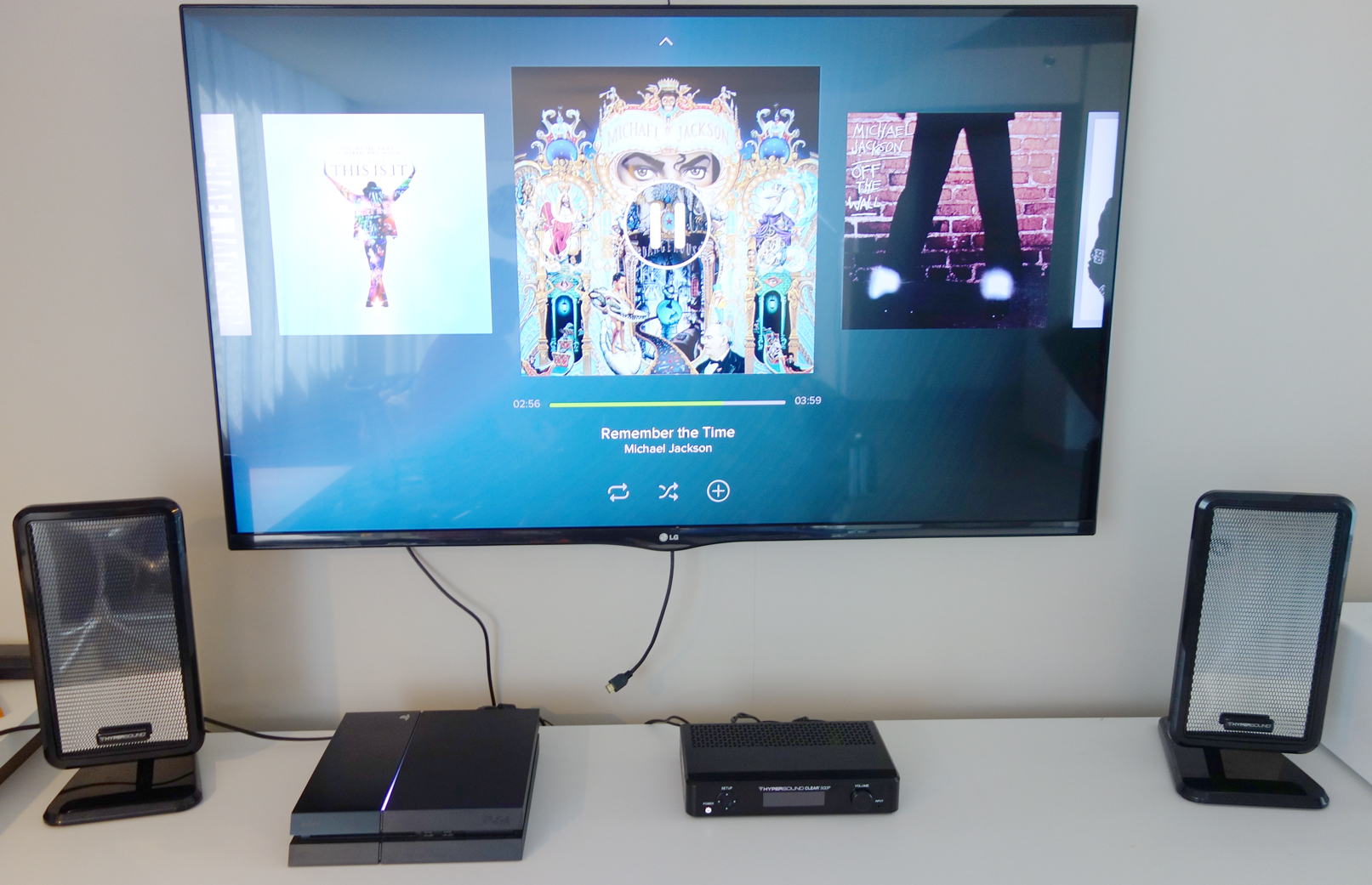 HyperSound Clear is a not a full audio system. It doesn't handle low frequencies at all, and is meant to be used with an existing, conventional sound setup -- whether that's TV speakers, a sound bar, or full surround sound system.

In my example, my mom's TV speakers would handle the lower frequencies and also play back audio normally for anyone else in the room. HyperSound Clear, with its directed sound, would be directed toward my mom's listening position. (In her case, her favorite chair.)

The HyperSound Clear emitters have a reflective surface behind their mesh covering. If the listener can see their reflection in the emitter, then they are right in the HyperSound audio beam. Thereby, setting up the emitters is (theoretically) easy enough for my mom to do... say, after knocking one over a few times.

I of course would hook the system up. It's just power, audio out from the TV, connecting the speakers, and putting batteries in the remote. With HyperSound Clear in place, my mother wouldn't have to strain to hear, and neither would anyone else be subjected to a crazy loud volume (whether they were in the beam or not). 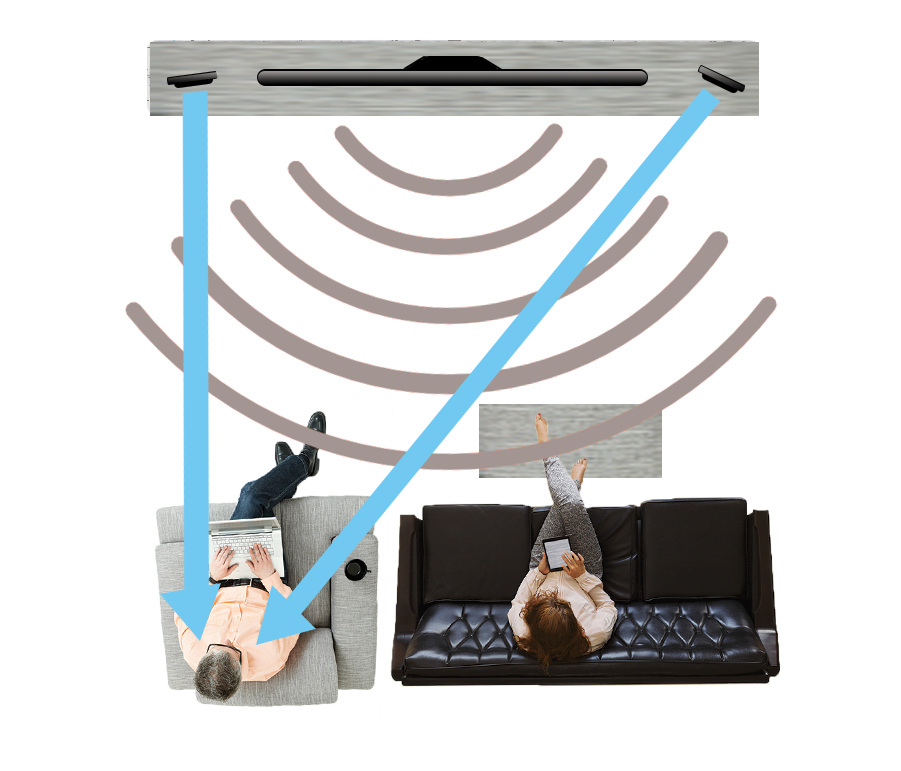 Where it gets tricky, however, is purchasing it. HyperSound Clear is meant to be programmed to redirect the listener's lost frequencies. That means seeing a healthcare type, like a hearing professional, who can diagnose the kind of hearing loss and program for HyperSound Clear to meet those needs. 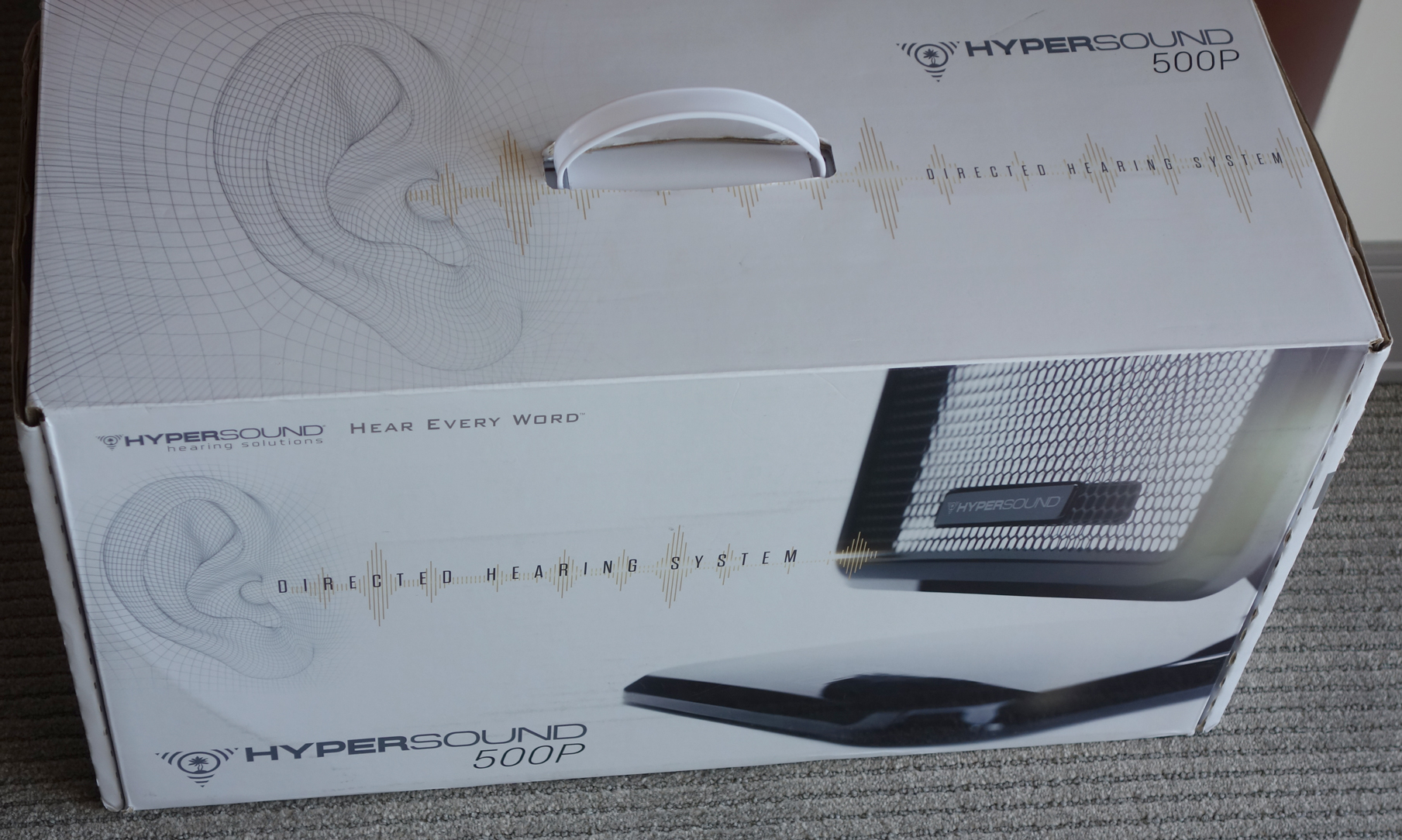 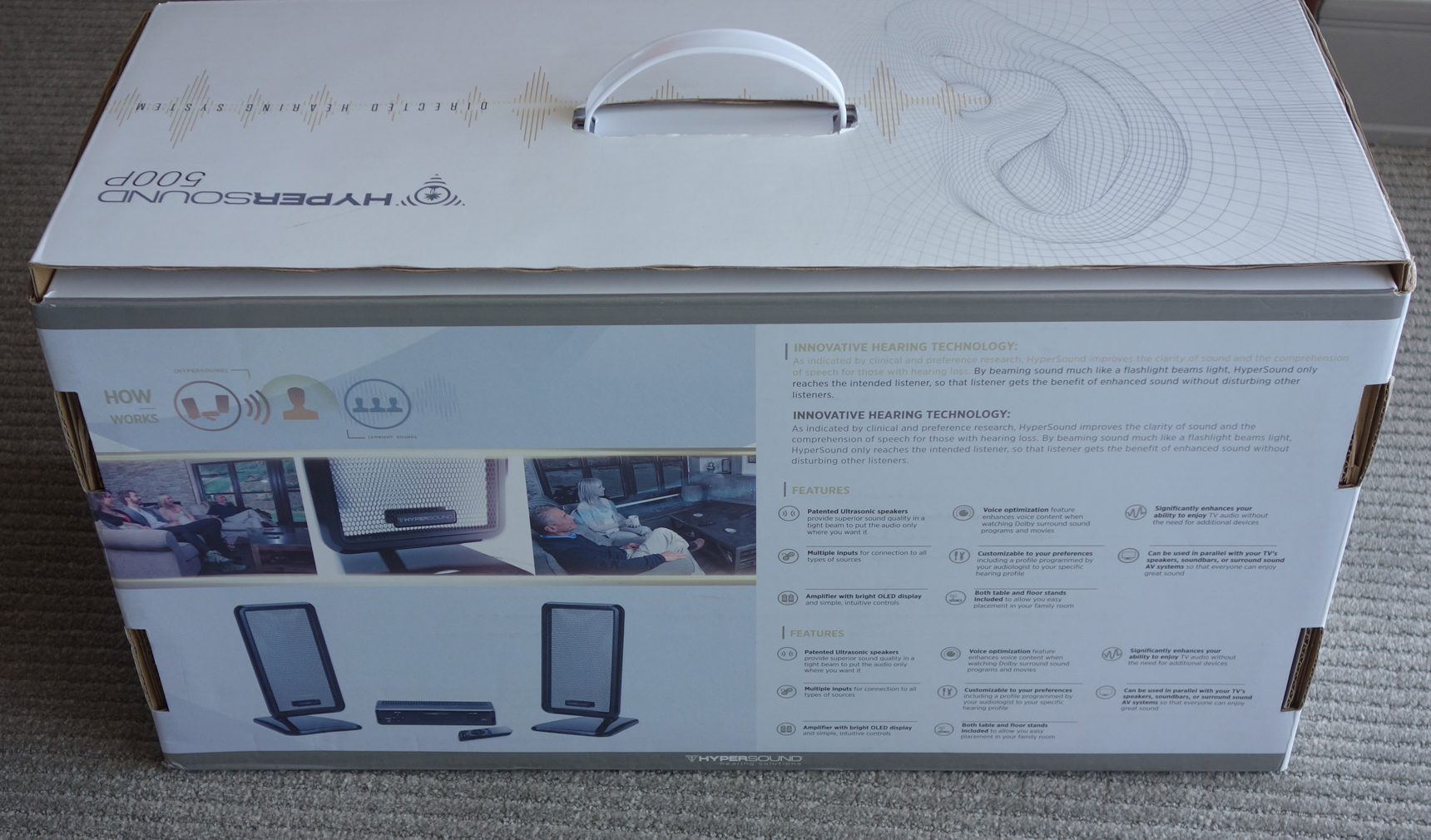 Manipulating sound to be directed and making it frequency-specific requires that the thin panel HyperSound emitters make use of ultrasonic frequencies to carry sound. (i.e. HyperSound Clear turns source audio into ultrasound.)

All of this circumventing of traditional speaker design and conventional playback frequencies comes with a cost as well. HyperSound Clear will check in somewhere around $1,500. Less expensive in terms of hearing aids, which start around $2K and range upward to $10K, but likely to prompt sticker shock from anyone who doesn’t have experience with hearing loss or hasn't experienced what the product can do. 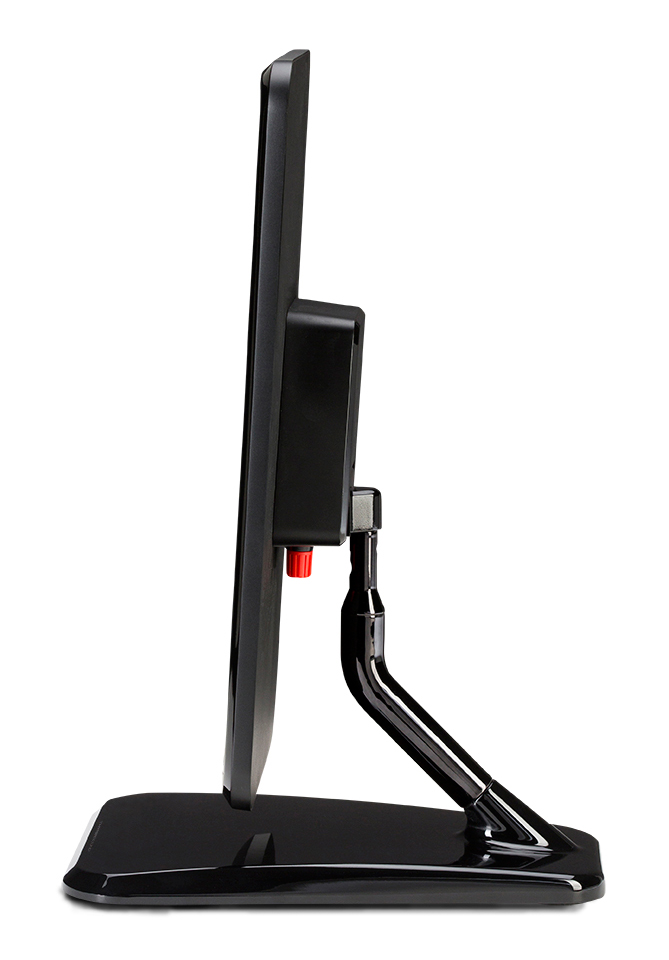 My mother's idea of a home theater is a TV, cable box, and lamp for doing crosswords. HyperSound Clear might be the biggest home theater assistance I can offer her since I replaced her old CRT television with an LCD.

Meanwhile, while I look forward to a HyperSound product that I can use in my home office, I do recognize that my own hearing is likely to need help in the next 20 years. I've seen companies like Dolby and DTS specifically try to ensure that listeners can hear dialog, but the HyperSound approach is meant to support different levels of hearing in the same room. That's a big deal for people with hearing loss, their loved ones, family, and friends. 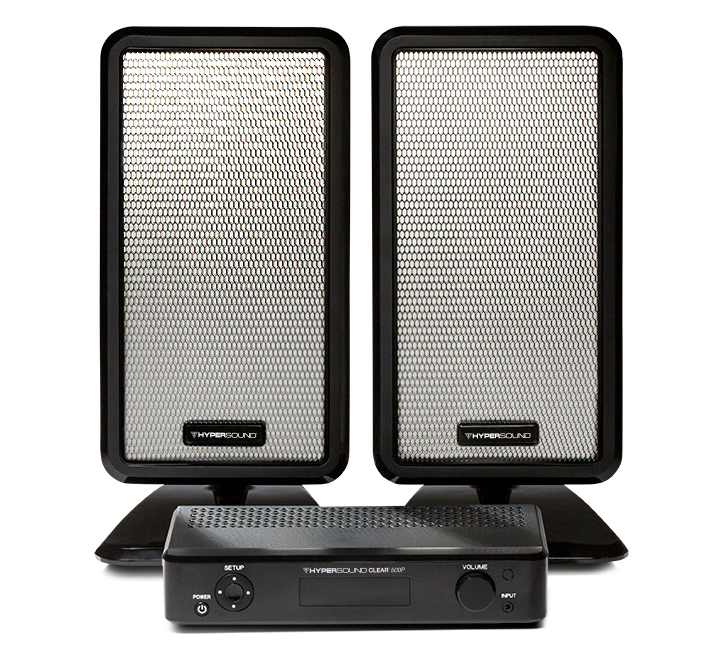 HyperSound Clear is meant to make the home theater enjoyable again by re-creating a listening environment that everyone can share. It's a product that hopes to improve the quality of life for the listener, as well as their family and friends. It's also a product that really needs the home theater audience, the users who can handle speaker connections and are given to early adoption.

Additional information on HyperSound used in this article can be found here and here.