PS4 Pro owners are in for a visual treat.

Square Enix has released a brand new trailer full of gameplay footage showing off how 'Rise of the Tomb Raider' (review here) will run on the PS4 Pro. The three minute video looks gorgeous, which should come as no surprise considering the game was a graphical powerhouse when it released on Xbox One in late 2015. The latest action-adventure game to star Lara Croft is set to finally release on PlayStation 4 on October 11th.

Since the PS4 version of the game is late to the party, players will be getting the base game with all of the previously released DLC ('Baba Yaga: The Temple of the Witch' (review here) and 'Cold Darkness Awakened' (review here). The open-world action game will also include a bunch of new content including a new PlayStation VR compatible chapter called 'Blood Ties,' and 'Lara's Nightmare,' which will find Lara Croft battling zombies (because clearly there aren't enough zombies in video games). Finally, the package will also include a new version of the Endurance mode (that will now support cooperative play), and a harder difficulty for the campaign called Extreme Survivor. That's a lot of new content, but existing owners will be glad to know that all of the content (minus the VR compatbility) will be coming to Xbox One and PC for Season Pass owners.

Check out the PS4 Pro gameplay trailer to see how the latest 'Tomb Raider' title will look on Sony's newest console (which comes out November 10th):

The PlayStation 4 version of 'Rise of the Tomb Raider' releases October 11th. It's currently out now on Xbox One and PC.

You can find the latest info on 'Rise of the Tomb Raider' linked from our Video Game Release Schedule. 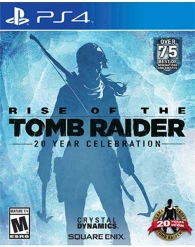