In partnering with Valve and Steam VR, HTC has managed to make the Vive an extremely important part of the VR landscape. Today, at the onset of Mobile World Congress 2016, HTC revealed a slew of details regarding the first consumer version of the Vive. 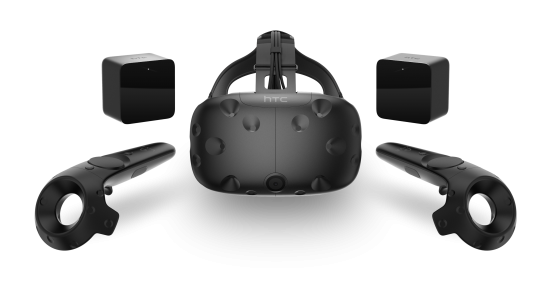 Based on the Vive Pre, the consumer edition will include the headset, two wireless controllers, and two movement sensors. It will also include two games, and will be priced at $799. (Check out impressions of the HTC Vive from CES 2016 here.)

The consumer edition includes a new phone integration feature set, which lets the user stay connected to their phones, receiving and sending both texts (quick replies) and take and make calls. (I love bluetooth phone support in gaming headsets, and I think this is a great secondary feature addition for the Vive.)

Preorders will open on February 29th with a shipping window of early April. The two games included are 'Job Simulator' and 'Fantastic Contraption.' (These games will be bundled free with the Vive for a limited time.) 'Job Simulator' is a very fun way to experience the fairly natural feel of using the touch controllers.

The natural comparison for the Vive include the Oculus Rift, the Razer OSVR, and even the PlayStation VR. The Rift has been priced at $599, but does not include motion controllers. (It does include a Xbox One controller and a media remote; touch controllers are due out later in the year.) Furthermore, the Vive includes a camera that not only lets the user see important things like their keyboard (when toggled on), but is a big part of making the chaperone system work. (The chaperone system lets the user designate physical bounds that can be seen in VR.)