Here's What I Can't Wait to See at PAX South

The first ever PAX South kicks off tomorrow at 10am CT (9AM for press), and for me, I'm looking forward to a packed show. Before I list off the things I've got scheduled and am really looking forward to, I should mention that this show, with its community focus, has a ton of stuff I won't even be able to glimpse. As I'm moving from appointment to appointment, I'll be stepping over and around thousands of fans who will playing on their 3DSs and breaking into impromptu card games. From hourly gaming tournaments spanning 20+ years of games (and the Omegathon!) to entire concerts, there will be what I consider entire shows within the show that I will have to pass on. (That's PAX for you.) 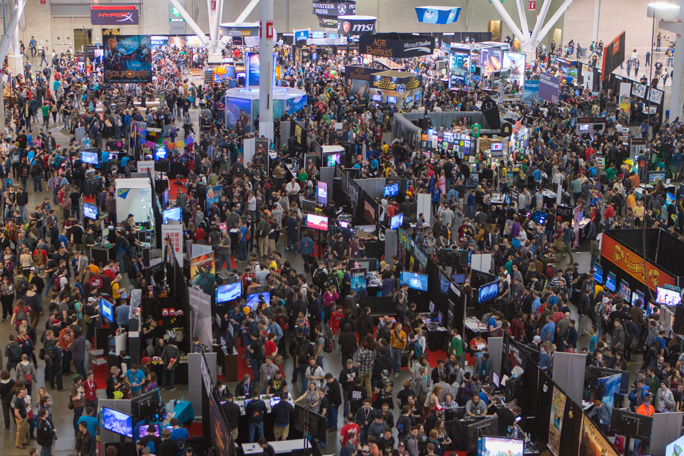 Even with a specific focus on upcoming games (AAA to indie), I'll still end up missing out on some very cool booths, developers and so forth.

With that in mind, here's all the public stuff that I plan to see at the show:

First up, I'll get hands on with the New 3DS XL and 'The Legend of Zelda: Majora's Mask 3D.' I've been holding off on a Japanese model, and the payoff will be getting to use the c-stick just like it was meant to be used back in the late 90's.

Next up, I'll be able to connect with some other folks at the show, and try to finish up some last minute planning.

From there, I'll dive right into one of the show's biggest booths, Grey Box. Friday is 'Grey Goo's launch, and publisher Grey Box will have both 'Grey Goo' and 'Dreadnought' available to play.

After Grey Box, I'm going indie. There is a serious amount of indies at the show. Some of those games and developers, like 'Titan Souls' and 'BOID' have the publishing support the likes of Devolver Digital and tinybuild. Others, like Tic Toc Games and the 'Adventures of Pip' will stand on their own. There are even games at the show like 'This War of Mine' that are out, and if I get a chance, I want to talk to chat with the devs.

At the same time, Friday afternoon, Gearbox will hold their first panel. Their major presence will endure throughout the weekend and by the end of sunday 'Homeworld Remastered' is going to appear, at least in teaser form. 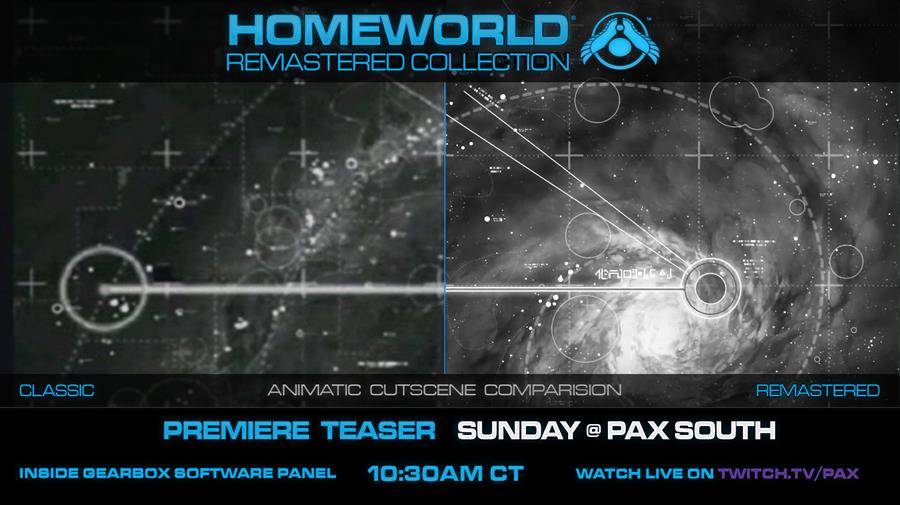 Before Friday's after show plans (which are going to be like the show but continued elsewhere), NVIDIA is going to host a panel in the Main Theater.

On to Saturday, which ought to be the biggest attendance wise.

First things first. Firaxis and head hocnho Sid Meier are going to be talking 'Civilization: Beyond Earth.' I'm hoping to get a better look at 'Sid Meier's Starships' as well.

There's a major 'Pillars of Eternity' panel going on with Obsidian Entertainment afterwards. I'm going to visit with AdMagic (they print 'Cards Against Humanity' among several other card games), and hopefully not get lost or absorded for too long in the tabletop gaming area. I've got some other (hands-on) meetings that afternoon, but the plan is to wrap-up in time to see the Amazon Gaming Roundtable.

Saturday night there is a 'Guild Wars 2' community party, which might be too intense for me.

Sunday morning is 10am start and a 10am meeting, but the good news is Sunday is a heavy indie game focus for me. One of my meetings that day is for 'Rebel Galaxy,' and I'm really hoping that mixing a dialogue based RPG style with space ship combat is a potent as it sounds.

Along the way, I'm going to try to stop by the following bigwigs:

And so yeah, a packed show, and like with most shows, half of the stuff I'll see, play and so on, will be something of a surprise as far as my schedule. Anyways, I'm off. I hope everyone that is going has a great show. Feel free to let us know in comments.

For all of those who aren't going, but want to get an idea of how the show is going as it happens, there's a nice mix that's going to be streamed on Twitch. 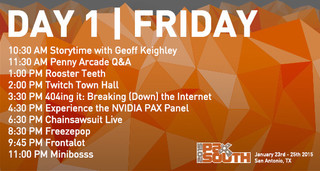 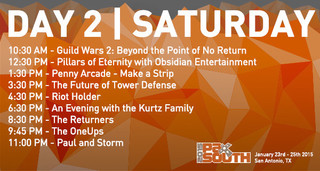 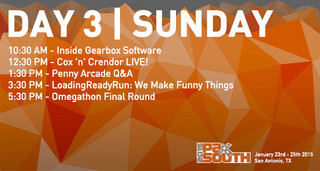