Roguelikes are big right now, and so are deck-based card games, and these elements, when combined with 3D combat and an overwhelming amount of charm, made for a very enjoyable experience in 'Hand of Fate.' And now, Defiant Development is returning to the game of life and death with 'Hand of Fate 2.' 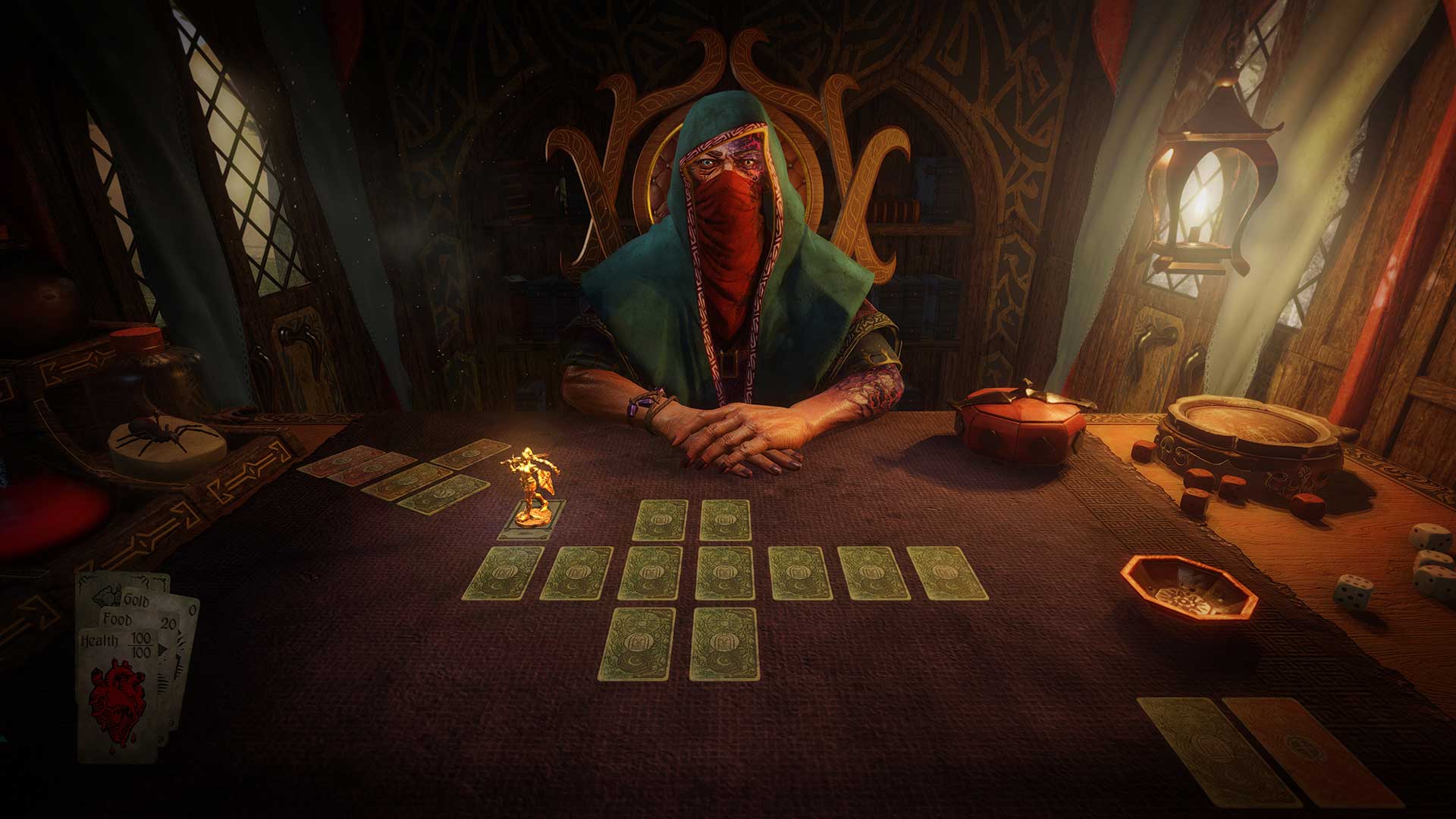 Following a meeting with Microsoft about the Xbox One S, I was snaking my way out of the packed Xbox booth at E3 when I stumbled upon 'Hand of Fate 2.' Being pleasantly surprised within the green confines shouldn't have been a surprise as only just the day before, I had stumbled upon Koji Igarashi around the same area. Nevertheless, I was surprised that 'Hand of Fate 2' was there, and that the game looked far along in development. 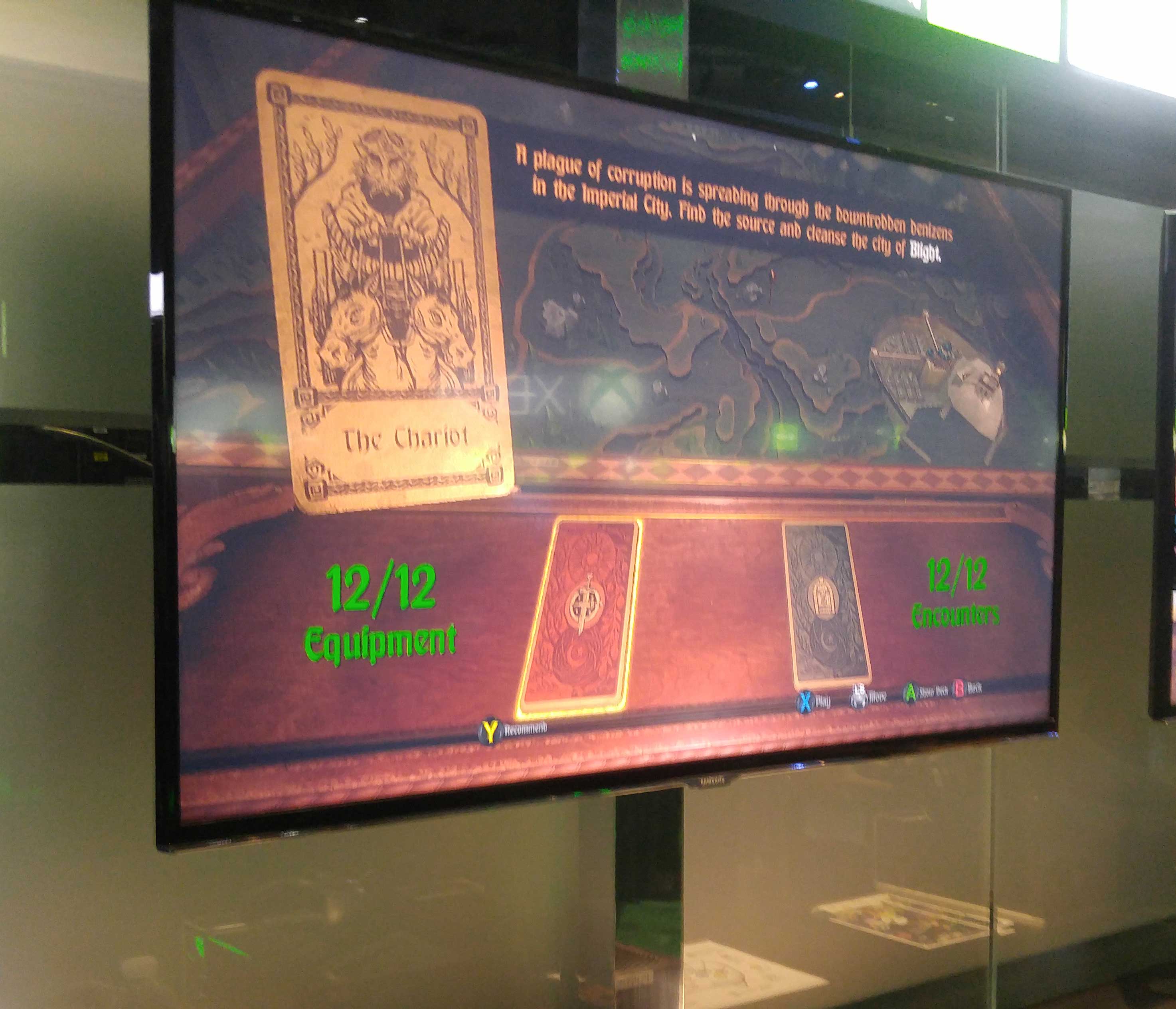 Like the first game, 'Hand of Fate 2' sees the player dungeon crawling by way of encounter cards. The cards can lead to quest-like interactions, shops, real-time combat, and any number of combinations and derivations thereof, and the player must watch their health, gold and food levels. Though it is set 100 years later, the dealer from the first game has returned, looking a bit worse for wear. It seems that this time out, he wants to teach the player to become superlative, and to take over dealing duties by way of defeating the victor of the first 'Hand of Fate.'

Naturally, while I was poking around the new aspects of the game, I had in mind the parts of the first game that I thought needed improvement. The game's 3D combat has been overhauled, and now supports several different weapon combinations, including dual wielding and two-handed weaponry. I only had time to try out the sword and shield, but it was enough to find that there is a new ability meter that fills based off of the player's hit combo. This is a nice change, but I was a little distracted when fighting. What was grabbing my attention was a companion. 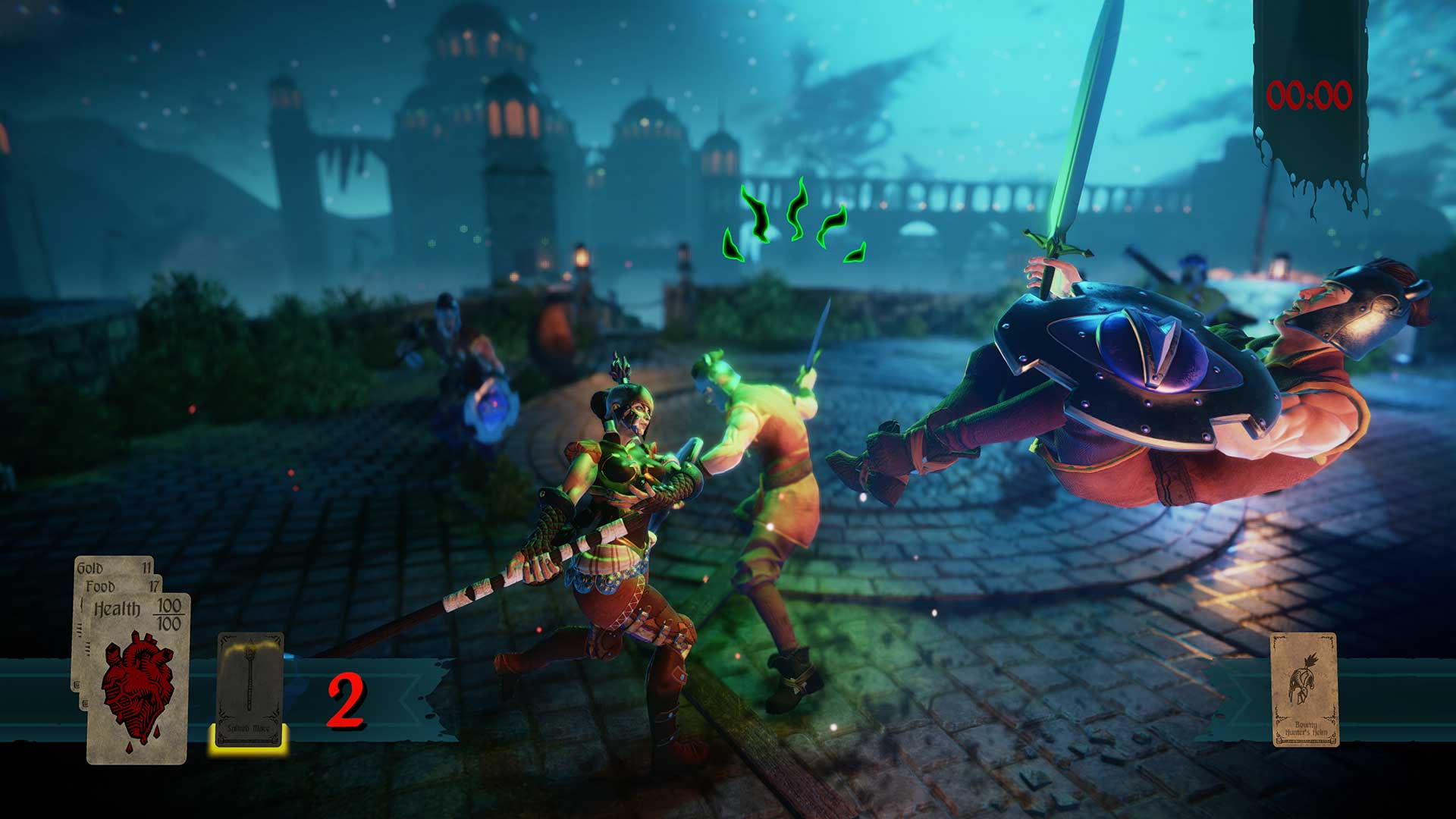 You see I had an encounter where some bandits were harassing a bard. They had taken some gold, and were making their escape, when I chose to intervene. I beat them up in 3D, and elected to return the gold to the bard. At that point, the bard let me know that the gold I had retrieved was just an illusion. As it turns out, the bard is actually a mage named Malaclypse. 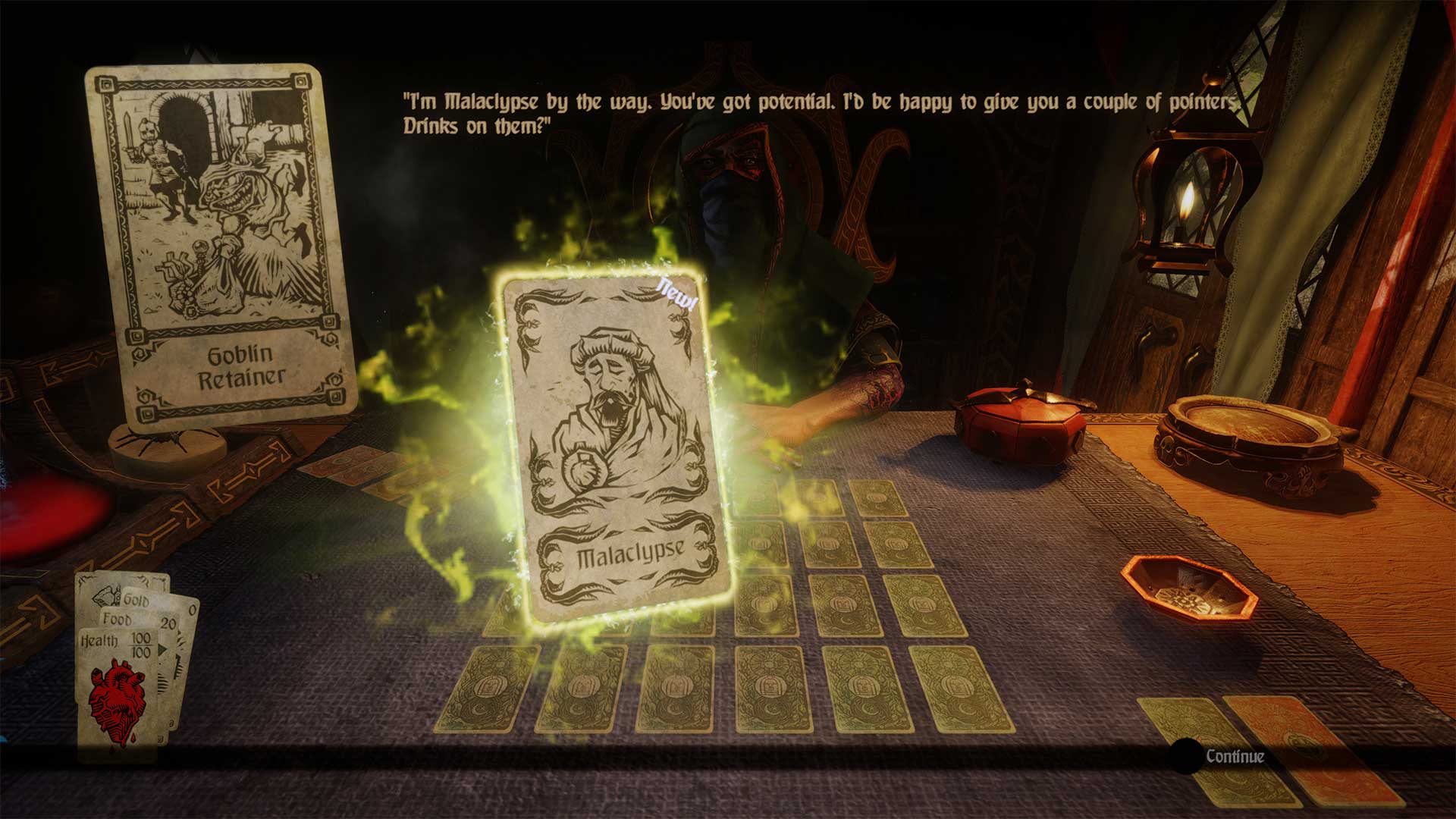 Malaclypse then joined me on my run. In real-time combat, the mage would me off to the side casting a one-hit shield for me, which made a big difference over the course of the battle. What I liked more though is that when doing the three card monte encounter, or the new dice gambling, Malaclypse could, if I asked, give me another shot.

Other companions are promised. I asked if there is a point in which the player gets to choose from a list of companions, and the response I got indicated that the possibility was there but that it hadn't yet been sorted out for certain. For sure, it seems that companions can be killed, and will remain dead for that specific hand. (They won't stay dead for long and can appear again in the next dungeon or run.) 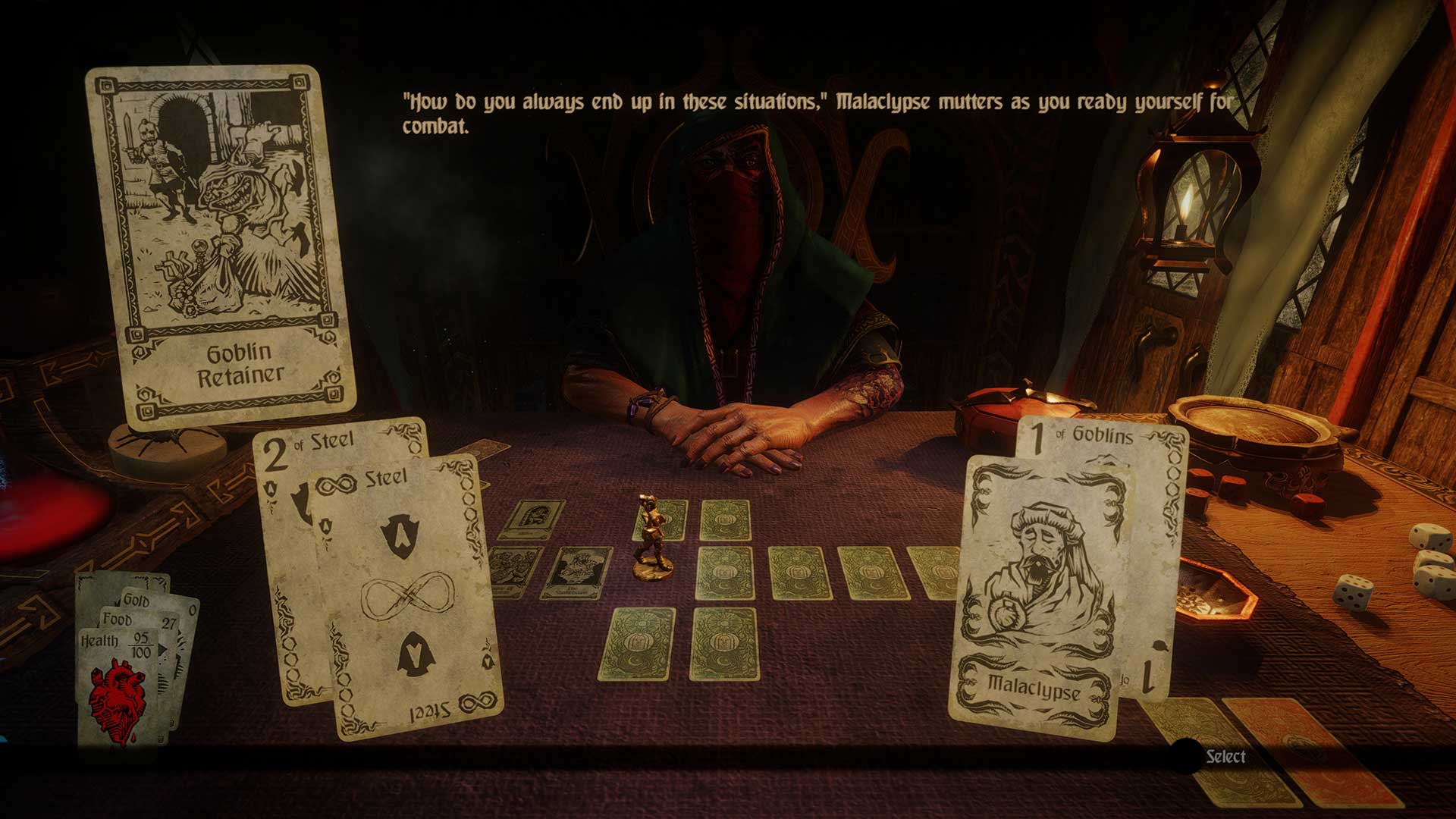 'Hand of Fate 2' has plenty of other changes and additions, like the camera control, platinum cards, and challenge maps as well as new card suit enemy types like the Steel suit and Blight suit, and of course, new encounters galore. 'Hand of Fate 2' is not due out until early 2017. In the meantime, I can easily recommend that just about anyone should try out the first 'Hand of Fate.' (Though not necessarily finish as the second half gets a bit rough. Fixing that is one of the stated goals of the new game).