'Tetris Ultimate' Now Out on the PS4 and Xbox One

After yesterday's debut on the PS4, 'Tetris Ultimate' has now arrived on the Xbox One (check out the 3DS review here). Priced at $9.99 for the new console versions, 'Tetris Ultimate' offers six modes to entertain both new and long-time fans:

Battle – Knock out challengers and be the last person standing.
Battle Ultimate – Similar to Battle mode but with crazy power-ups.  Compete in the ultimate battle showdown using power-ups to clear away lines, shower opponents with blocks or shift their Matrix to the left after each move.
Marathon – Complete level 15 and rack up as many points as you can.
Endless – Keep clearing lines until your stamina runs out.
Ultra – Race to score as many points as possible before time runs out in this three-minute challenge.
Sprint – Clear 40 lines as quickly as you can. 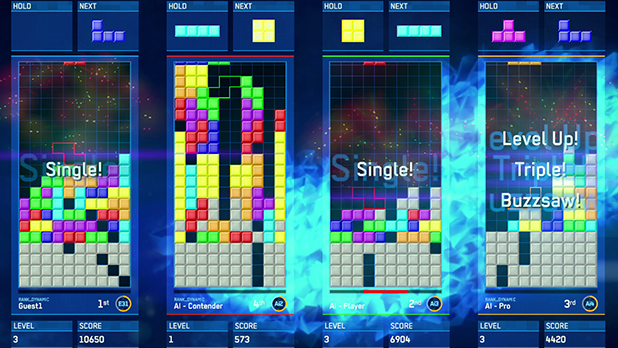 In addition to the six gameplay modes and four player support, 'Tetris Ultimate' allows players to track friend scores and even watch in-game replays. Even better, the game tracks each player's play style and generates a version that friends can face off against.