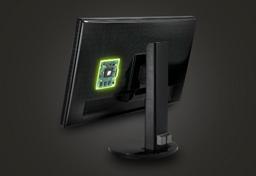 4K, G-Sync Monitors may be the future of PC gaming.

Nvidia is trying to hook up as many monitors as they can with their new G-Sync technology, which is built with the distinct purpose of cleaning up the image quality in video games. Screen-tears, v-sync lag and suttering are all eliminated by synchronizing a monitor's output to a computer's Nvidia GPU, which couldn't have been done without a direct access point to those monitors.

If you're intent on finding the best image quality out their for your games, grabbing a 4K monitor that's G-Sync capable is likely your best shot.

It's a technology really worth seeing for yourself. Nvidia is showing it off at E3 right now, in their tent across the street from the center. If you're not in L.A., though, you can just download Nvidia's G-Sync demo video through their G-Sync hub. Make sure youre monitor is running at 60 frames per second.

And for further convenince, here's a YouTube explainer from Nvidia, but it's tough to get the right quality by streaming.

G-Sync is currently compatable with "any GeForce GTX 650 Ti BOOST or higher Kepler-based GPU," according to the FAQ.

As for available monitors, ASUS has already starting building G-Sync into some of their models, and according to Nvidia, "Many of the industry’s leading monitor manufacturers have already included G-SYNC in their product roadmaps for 2014. Among the first planning to roll out the technology are ASUS, BenQ, Phillips and ViewSonic."

Rest In Peace Sean Connery – The James Bond Actor Was 90