How to Upgrade the PS4's Hard Drive Using the New System 2.50's Back Up & Restore Functions

It's gotten to be pretty simple.

For anyone who uses their PS4 regularly, the system's stock 500GB drive is only a starting point. After all, with regular 25GB game installs, monthly PS Plus titles, tricky DLC management, captures and more to consume hard drive space, a 500GB drive gets tight quickly.

Like the preceding console, the PS3, Sony's idea with the PS4 hard drive space is that users are free to swap in a larger 2.5 inch (notebook size) drive. (There is no way to expand storage through an external drive like with the Xbox One and Wii U.) But until just recently, the PS4 was missing a key component that the PS3 has, a way to back-up and restore the full image. In my case, that would have meant having to redownload some 300-400GBs of data, which while doable, lacks the elegance of the back-up and restore method.

With the 2.50 System update, the ability to back-up and restore in now part of the PS4s toolset, and as such, I decided it was finally time to swap in a new drive.

Well, not quite. First, I needed to get my hands on two important components, a new, larger drive, and a spare external drive with which to store and move the back-up. While I was debating different options, a spare, unused 1TB 7200RPM HGST 7K1000 fell into my lap. (Datasheet here.) Suffice to say that the speed, 32MB cache, pedigree, etc. were all right what I was looking for. 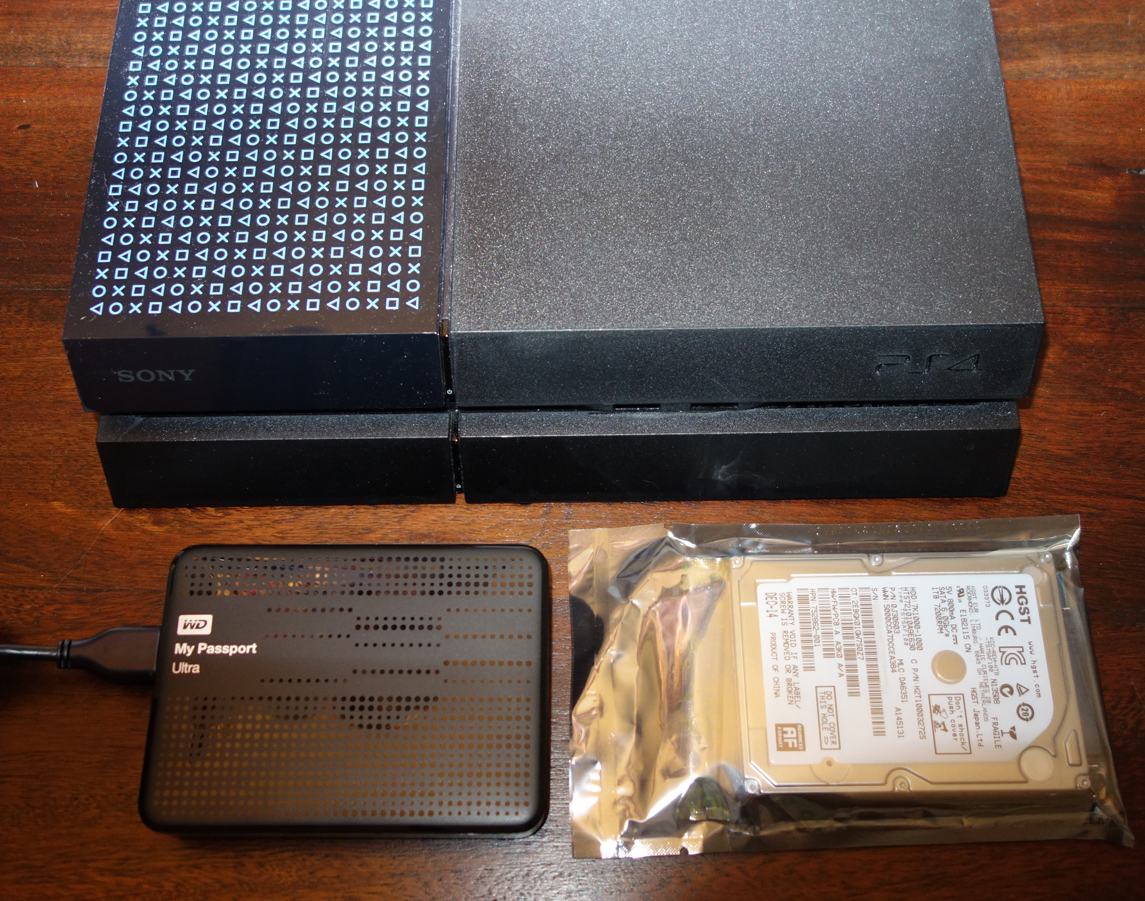 Next, I need an empty spare drive in order to store and transfer the back-up. For this I picked up a locally available 2TB USB 3.0 Western Digital My Passport Ultra. Part of my thinking here was getting a drive big enough for future back-ups and hard drive upgrades. Another popular method would have been to get an external like this 2TB Seagate, disassemble it, and swap the 2TB enclosure drive for the 500GB PS4 drive. A fine option, but I wanted a 7200RPM drive, so not for me.

First word of warning. The back-up and restore process of the PS4 is very painless with one important exception, time. Backing up the 400GB of data off the PS4 took around 5 hours. Likewise, a system update delivered via USB is required to get the PS4 back up to 2.50 after the hard drive installation. This 750MB file (from here) can take some time to download, so get it early. (The full update file is needed, which is available from the second Download Now button on this page.) But before I could even begin that procedure, I hit a snag. The My Passport Ultra comes formatted in NTFS, which makes the PS4 frown with a little error message. A quick trip to a Windows 7 PC and I was able to Quick Format the drive to a PS4 friendly exFat format.

Thus with the exFat drive in tow, I was ready to start. First, I went ahead and did a Trophy sync so that I would not lose any recent Trophies. Next, as described here, I connected the USB drive, and I went to System, Back Up and Restore, and selected Back Up PS4. (It's at this point that the PS4 checks the USB device.) The PS4 let me know that all of the non PSN users accounts on the system can only be backed up this this specific PS4. I hit Ok, and got the Back Up PS4 screen. It's here where the PS4 assesses free space on the USB device.

As shown in the screen below, there's only one option and that is whether or not Applications will be part of the back-up. Otherwise it's just Captures, Saved Data, and Settings. Even after deleting a few unneeded games, Alpha, Betas. And so forth, I still had a serious chunk of apps, none of which I wanted to redownload. I left the Applications box check and started the process. 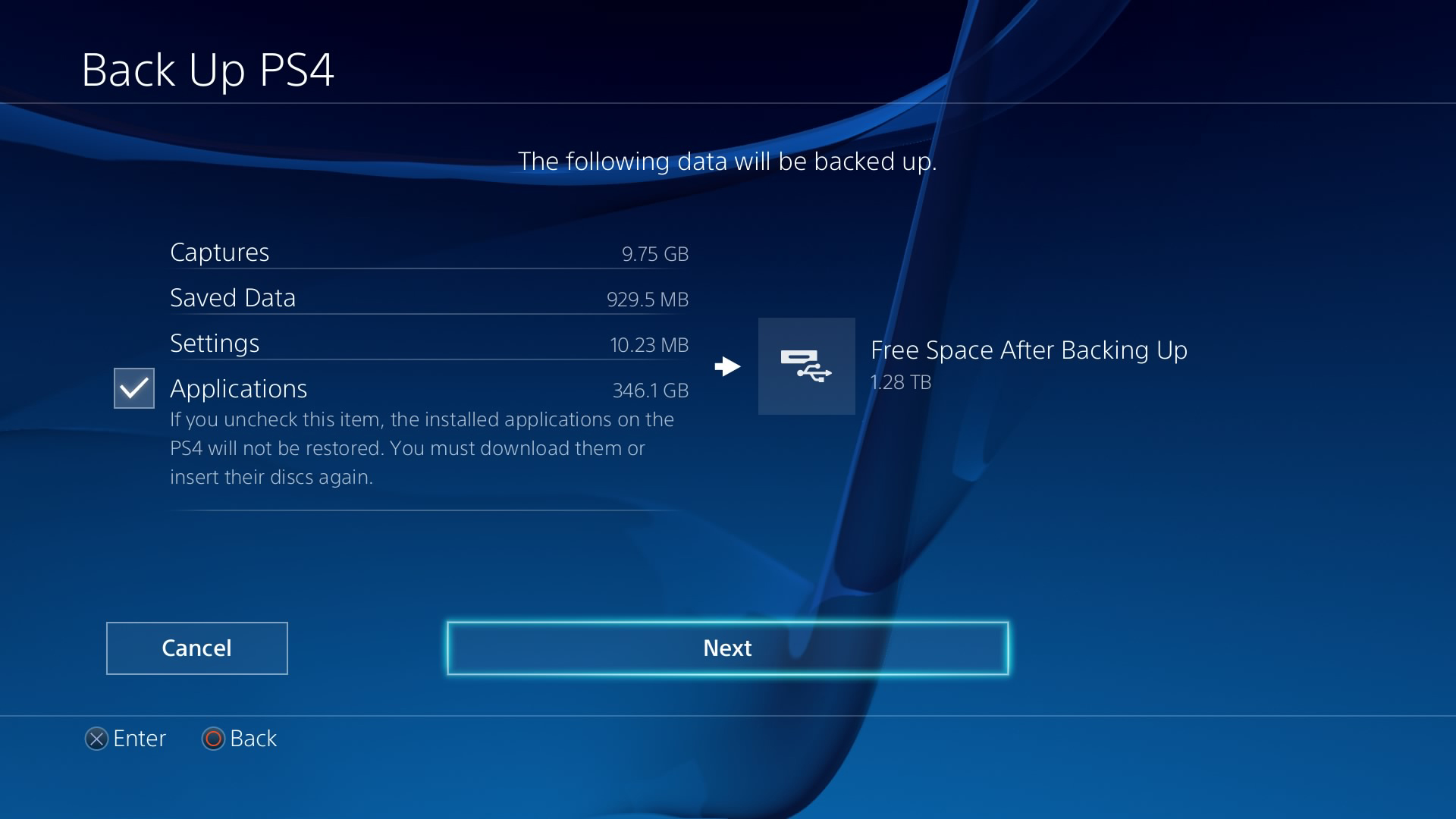 Taking the PS4 over to a table with some room, I pulled off the HDD bay cover. (There are diagrams from Sony here.) There's one screw that keeps the HDD tray in place, so that screw comes out first. With the tray free, it's easy to remove the four hard drive mounting screws. I recommend using a skinnier Philips head with a healthy amount of pressure to avoid any stripping. 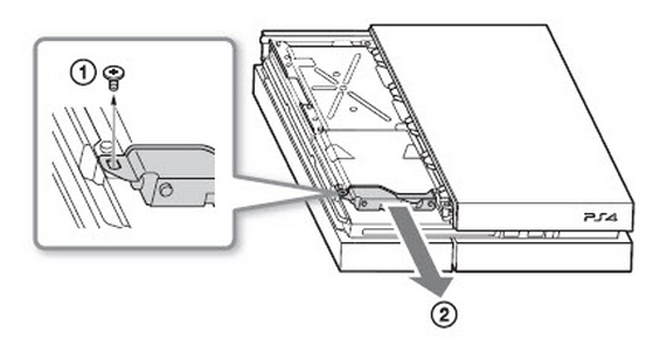 With the old drive out, the new drive goes back in in the reverse order. First, the four mounting screws, and then after sliding the tray in place in the PS4, the single retaining screw goes in, followed by the HDD bay cover. 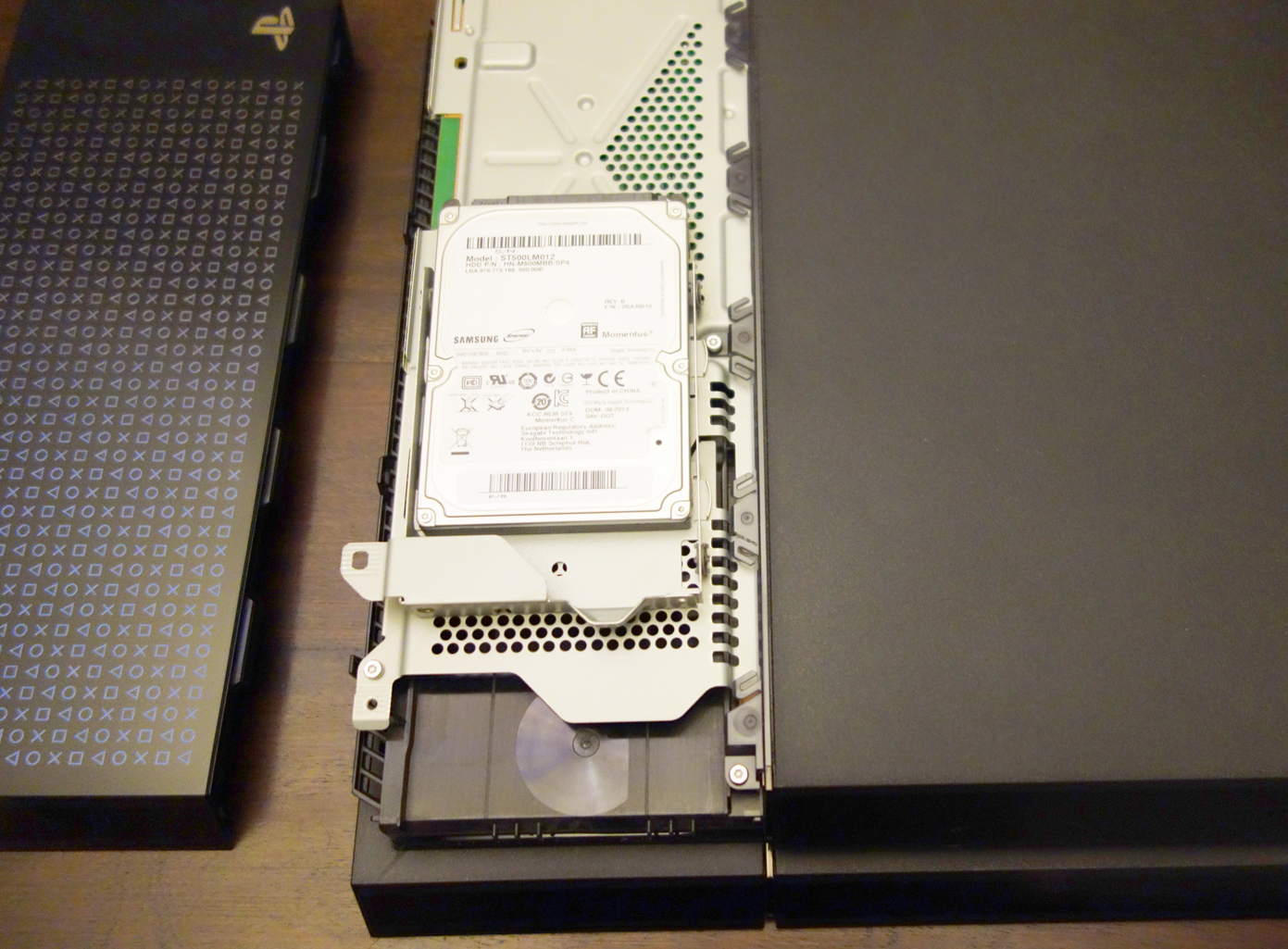 With all of the hard drive pieces back in place along with the new drive. It was time to power up. Naturally, just like back in the PS3 days, I hit another snag. To even get the PS4 to fully load after installing the new hard drive, I needed to provide the full 2.50 Update file. I grabbed a FAT formatted USB drive and downloaded the update file from Sony here. Sadly, I initially didn't grab the full update file (PS4UPDATE.PUP at 785MB as of this writing, the last download link on this page), and the PS4 continued to complain about not finding the update file. Once I grabbed the full update, I rebooted the PS4 and the update installed from the USB drive without issue. 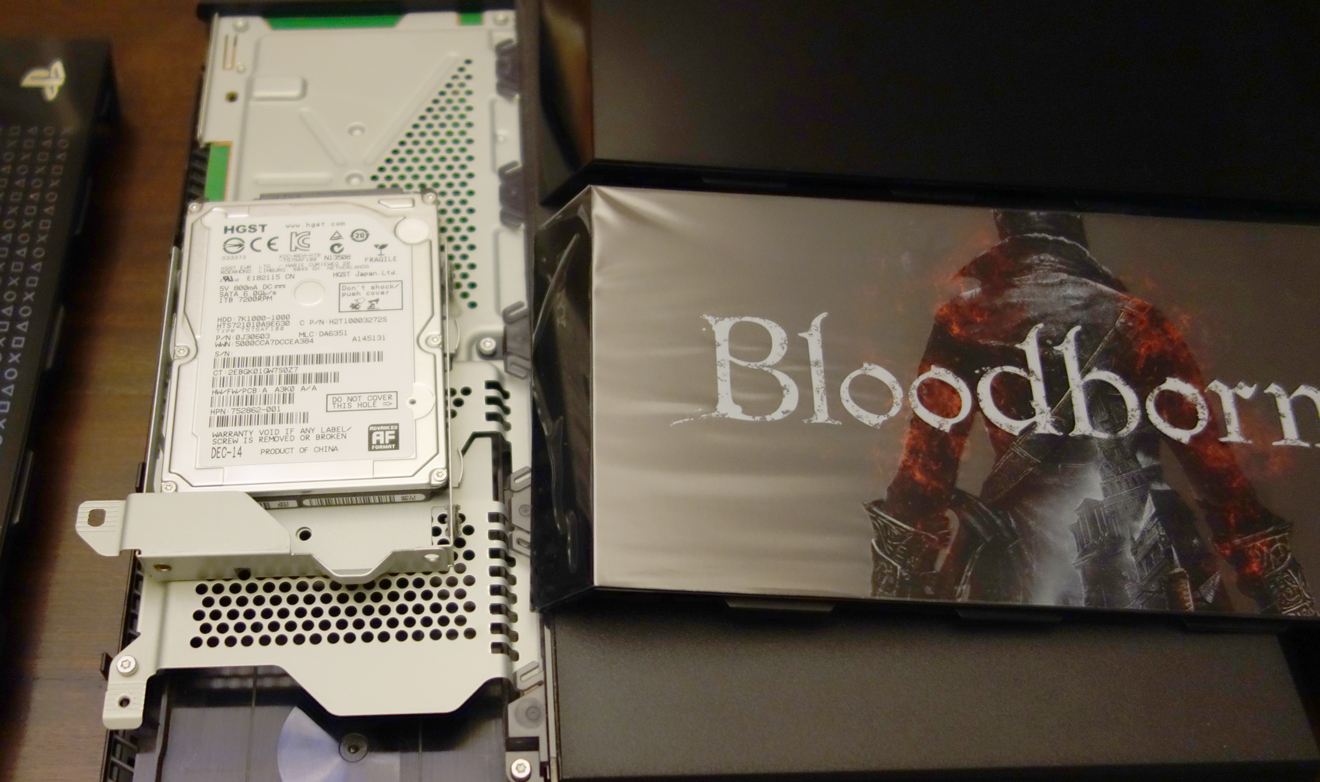 At that point, roughly 6 hours in, it was early morning. After going through some PS4 set-up screens, I had access to the normal menu. I connected the USB My Passport Drive, and went to System, Back Up and Restore, Restore PS4. (As described here.) After agreeing with the system warning that the restored date would overwrite anything on the PS4 (which was nothing at that point), I started the restore.

The restore promised another five hour process, and elected to sleep while it did its thing. When I awoke some six hours later, the PS4 had shut down as part of its one hour idle power saving setting. From there I started it up, verified that my captures, apps, and game saves were intact, and fired up 'Bloodborne.' From my comparisons, I noticed a 10-15% drop in load time for the painfully long Old Yharnam load screen. (I used an Old Yharnam capture for comparison.) Altogether, the process was close to painless, much as it was during multiple PS3 hard drive upgrades. In spite of the long back up and restore times, I savor not having had to redownload anything more than the system update. When it comes time to move to 2GBs, I'll be ready. 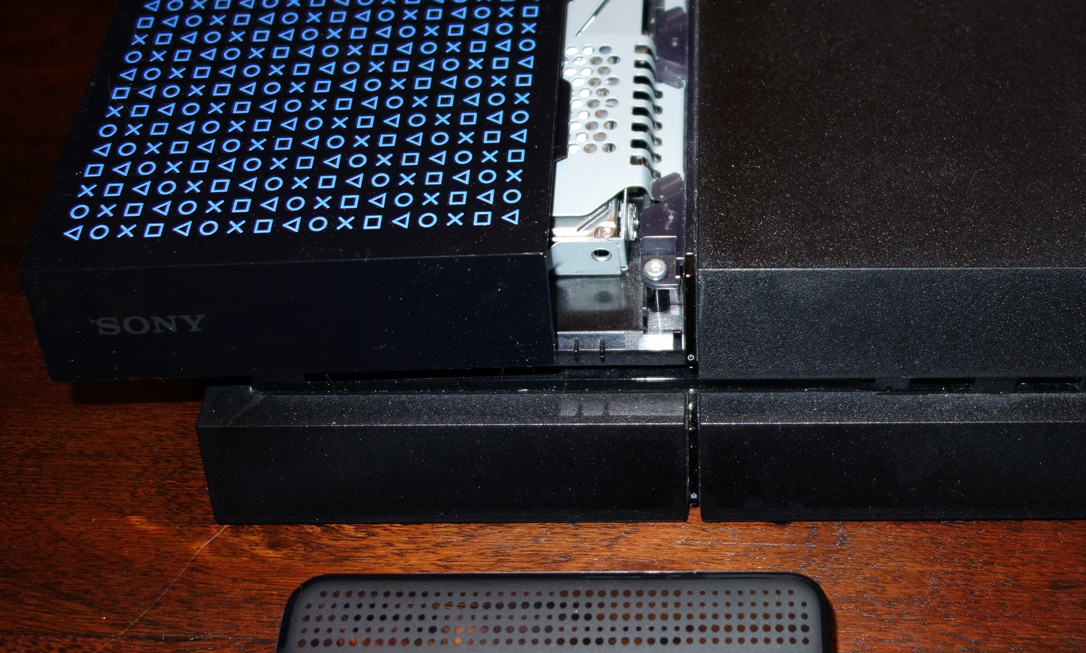 And that's my experience/guide to upgrading the PS4 hard drive using the new System 2.50 Back Up and Restore functionality. If any readers have notes or questions, please don't hesitate to post them below.