Funimation Details 'The Boy and the Beast' for Blu-ray

The latest feature film from award-winning Japanese director Mamoru Hosoda is coming to Blu-ray in June.

In an early announcement to retailers, FUNimation Entertainment is preparing 'The Boy and the Beast' for Blu-ray on June 7.

When Kyuta, a young orphan living on the streets of Shibuya, stumbles into a fantastic world of beasts, he's taken in by Kumatetsu, a gruff, rough-around-the-edges warrior beast who's been searching for the perfect apprentice. Despite their constant bickering, Kyuta and Kumatetsu begin training together and slowly form a bond as surrogate father and son. But when a deep darkness threatens to throw the human and beast worlds into chaos, the strong bond between this unlikely pair will be put to the ultimate test-a final showdown that will only be won if the two can finally work together using all of their combined strength and courage.

Supplements have not been revealed yet, but the Blu-ray/DVD/Digital HD combo pack will feature 1080p video, and Japanese and English Dolby TrueHD 5.1 soundtracks.

You can find the latest specs for 'The Boy and the Beast' linked from our Blu-ray Release Schedule, where it's indexed under June 7. 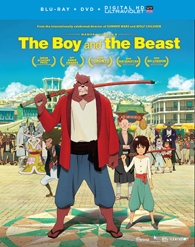 Discs mentioned in this article: (Click for specs and reviews)
The Boy and the Beast (Blu-ray)