Disney held the world premiere for Star Wars: The Last Jedi this past Saturday, December 9, in Los Angeles. And to help ensure an optimal screening experience for the movie's big debut, the studio opted to team up with Dolby to convert the Shrine Auditorium to support Dolby Vision and Dolby Atmos cinema technologies.

According to a report from The Hollywood Reporter, the six month process involved installing a 70 ft. wide by 30 ft. high screen and a Dolby Vision projection system with dual Christie laser projectors, a backup Xenon projector, and a third projection system for use on the red carpet. In addition, the setup also featured 193 speakers for 40 channels of Dolby Atmos audio, including ceiling speakers held by 2,500-pound overhead trusses. 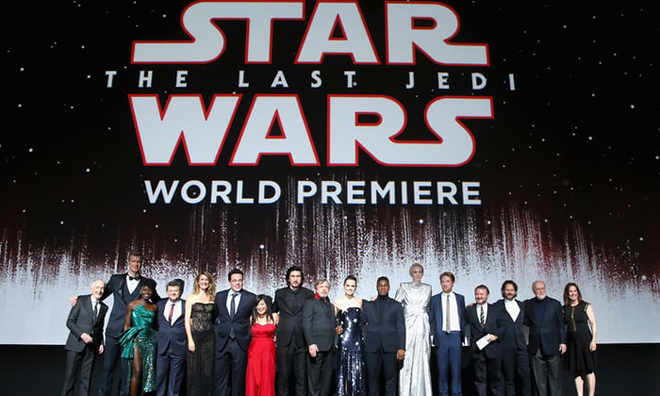 The Dolby Vision laser projection system offers support for high dynamic range images with 500-times the contrast ratio of conventional projection systems (1,000,000 to 1!), pure black levels, expanded color gamut capabilities, and twice the brightness (up to 31fL). Meanwhile, Dolby Atmos audio uses object-based mixing and ceiling speakers to create an immersive experience with overhead sound. In addition to the Shrine Auditorium premiere of Star Wars: The Last Jedi, both technologies are used in Dolby Cinema locations worldwide, including more than 80 AMC theaters throughout the US. Click here to see a full list of locations.

Star Wars: The Last Jedi is set to hit theaters on December 15. The movie comes from director Rian Johnson and will pick up where Star Wars: The Force Awakens left off, following Rey (Daisy Ridley) as she continues her epic journey with Finn (John Boyega), Poe (Oscar Isaac) and Luke Skywalker (Mark Hamill) in the next chapter of the Star Wars saga.