While we'll leave the full review to Phil Brown over on the Bonus View (read his thoughts HERE), I set out to see War for the Planet of the Apes this weekend at one of the 100 Dolby Cinema locations now open worldwide and thought I'd share my thoughts with you all here.

If you don't know what I mean by Dolby Cinema or Dolby Cinema at AMC, please check out THIS ARTICLE where we first demonstrated the premium cinema auditorium. And, for more information on Dolby Vision and Dolby Atmos technologies, please click HERE and HERE, respectively. 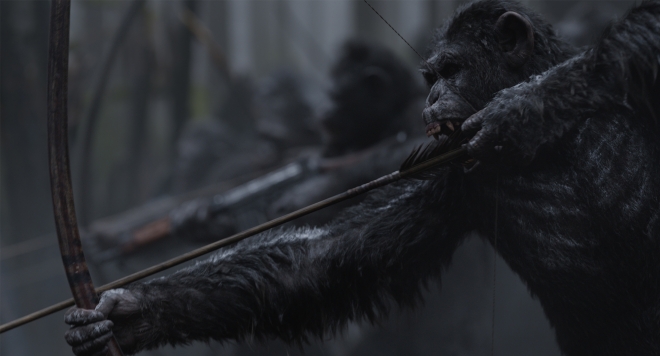 WAR FOR THE PLANET OF THE AWESOME FRANCHISES

I'm a pretty big fan of this new Apes trilogy despite (or perhaps because of) my limited affinity for the original Apes movies. I'm not saying they're bad, mind you; it's just a franchise I haven't experienced outside of a few casual Saturday afternoons back in the days where you had to watch commercials OR flip channels to find something else to watch.

Still, the new trilogy is special to me because these films are equal parts blockbuster entertainment and character-focused dramas. Also, as far as prequels go, they're uniformly surprising and dramatic where many feel inert and unnecessary. Especially in an era where blockbusters and franchise movies are often overlong and/or dramatically depend on you watching later chapters, the Apes trilogy works equally well as stand-alone chapters or one complete story.

In short, I'm in awe that these new Apes movies exist AND stand up next to modern cable television for having dynamic and complex characters... who just so happen to be CGI-rendered apes.

Where Rise began in our world, showcasing Caesar's childhood and the outbreak of a biological virus that was meant to cure Alzheimer's, Dawn took audiences ten years into the post-apocalypse for the first armed conflict between mankind and ape-kind. Both stories highlighted well-intentioned characters making mistakes while trying to do good things and a whole bunch of tragic outcomes.

War picks up only two years after Dawn, with Caesar trying to protect the apes from The Colonel and his army of soldiers who are hell-bent on hunting down and killing every last ape. Caesar still hopes for peace, sending back human survivors after battles, but The Colonel's definition of mercy is as brutal as his desire to destroy anyone, human or ape, who opposes his tactics. 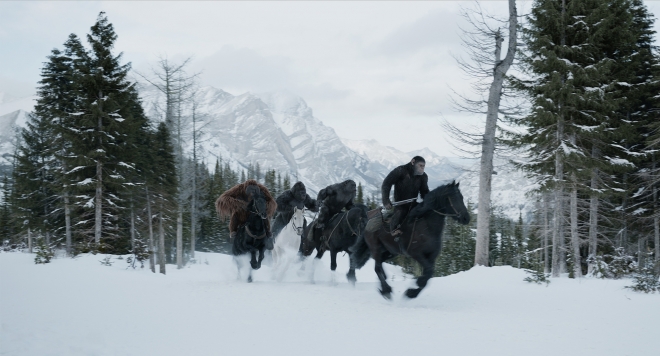 There's more to the story, of course, but I managed to go into War unaware of the bigger plot-points and, because of this, was genuinely surprised by the story choices the filmmakers made. Effectively, if you're expecting another chapter akin to Dawn, this one goes in a different sub-genre direction.

What I will say is that the movie is grounded in some heartbreaking emotions that layer thematics on top of character arcs. War is very much about whether or not Caesar will lose his soul to avenge and defend his ape family, which is dramatically explored through every choice and consequence Caesar makes and experiences. The filmmakers have also added more of a female presence, which I applaud, and smartly continued to build, through callbacks and payoffs, towards a world that resembles the original franchise.

If you enjoyed Rise and Dawn, War is highly recommended; for everyone else, I would definitely recommend giving this trilogy a try so you can experience its third chapter on a premium, immersive, big screen where it's meant to be seen and heard. 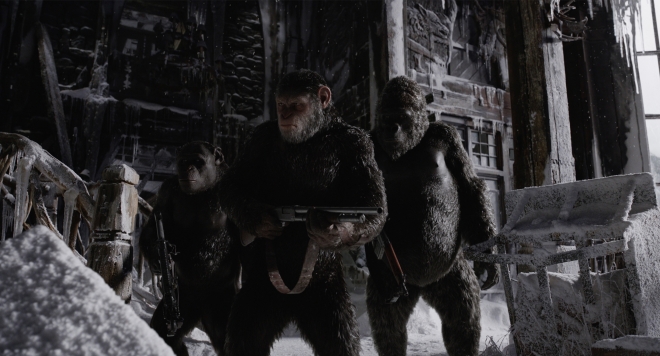 As I was watching War for the Planet of the Apes, I couldn't help but feel a bit disappointed. It looked quite good, don't get me wrong. Everything was clear and sharp, and the contrast was very good. Still, when you compare it to Guardians of the Galaxy Vol.2 or The Jungle Book, those movies are so much more aggressively stylized (and colorful) than this gritty blockbuster with its cold and wintry color palette.

In fact, I was considering not writing this article...

Until afterward, when I popped into a conventional digital cinema auditorium, and my jaw dropped. It looked like UTTER GARBAGE by comparison. Graying black levels. Jacked contrast with severe shadow detail crushing. Drab and muted colors, especially the yellow subtitles for when the apes use sign language. And it wasn't as visibly sharp.

Hands down, watching War in Dolby Vision is like getting laser eye surgery after needing glasses for years. You can see all the fur follicles and tree branches and rusted metal fencing. You can see characters and locations in the shadows, even when they're intentionally out of focus. You can see the flickering orange fury of campfires and explosions. Colors are more vibrant and vivid and true. And black levels are actually black. In short, it's a night & day difference, folks. One you might not realize you're missing until it's too late.

Bottom line, and what I take away from this screening, is this: Dolby Vision won't always be show-stopping from an in-your-face color and visual spectacle department, in very much the same way that not all Blu-rays are demo material even when the transfers reproduce the original source materials perfectly. BUT when you go into a Dolby Cinema, or see a movie in Dolby Vision, you're going to get a dramatically more accurate, detailed, and colorful version of whatever film you're seeing. It's like buying an OLED display -- everything looks better even if you're not always obviously-wowed.

[EDITOR'S NOTE: by the way, there are other great premium cinema formats too -- IMAX Laser is extraordinary, for example -- and my intention here is ONLY to compare Dolby Cinema to standard digital cinemas, primarily because they are the only two formats in which I've seen War thus far. In short, if you prefer something else, that's great and feel free to tell us about it in the comments. Cheers!] 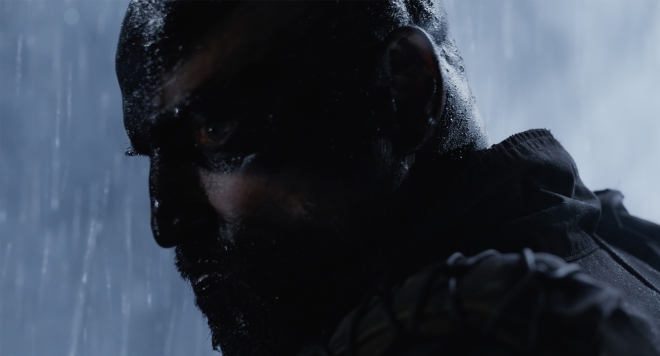 War arrives with another outstanding Dolby Atmos mix that, at times, is a touch more subtle than the theatrical mix released with Dawn, but serves its world-building well before becoming outright demo material during the film's climax.

With more of a wintery setting than the previous films, War knows when exactly when to ramp up, ping-ponging sound around the hemisphere, and when to be quiet. In that sense, the film often portrays moments of action and mayhem in a somber, dreamlike quality before returning to more traditional bombast.

This Dolby Atmos mix also excels at expanding the film's locations, where cave chambers echo with falling water and wind whips through snowy mountaintops and fire crackles in an empty hotel lobby. All of these choices uses Atmos' pinpoint precision to extend the movie OFF the screen, thrusting us into its universe.

Still, the mix can seem a little less overt compared to Dawn's theatrical mix, which featured many scenes in rainy forests with plenty of overhead sound placement. Until the climax that is, when War's Dolby Atmos mix becomes absolutely bonkers in a Fury Road kinda way. Precision Chaos is the good way to describe it; where, despite the madness on screen and surrounding us aurally, you can hear every sonic choice amidst the overall bombast. It's a lot of fun.

Overall, War boasts a very good Dolby Atmos mix and here's hoping Fox includes it on (at least) the 4K Ultra HD Blu-ray because it's going to make a lot of sound enthusiasts happy. 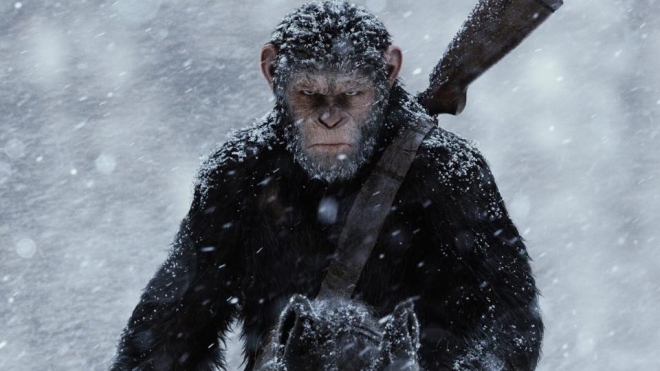 Regardless of where it ranks in the series and against other modern franchise pictures, War for the Planet of the Apes is extraordinary blockbuster filmmaking that seamlessly blends emotion and character and thematics with a heaping dosage of thrilling action. Dolby Cinema, with its one-two punch of Dolby Vision projection and Dolby Atmos, enhances the whole experience with far more clarity and contrast and color. To be clear, the HDR grading and color palette isn't as in-your-face WOW as Guardians of the Galaxy Vol.2 or The Jungle Book, but the standard SDR grading and performance capabilities of conventional digital cinemas literally pale in comparison.