First up on December 6 we have the Michael Haneke: Trilogy  featuring The Seventh Continent, Benny's Video, and 71 Fragments of a Chronology of Chance on Blu-ray. 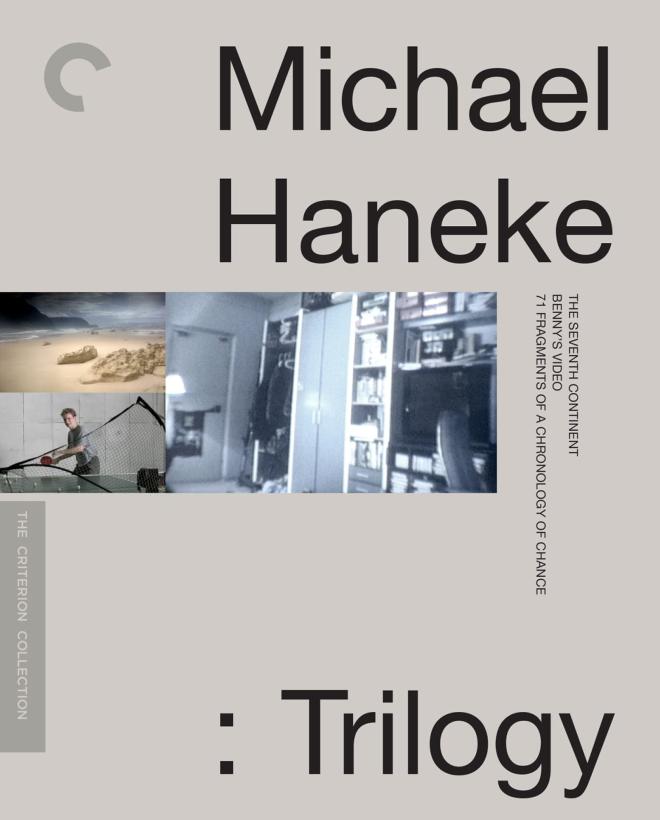 One of contemporary cinema’s most original, provocative, and uncompromising filmmakers, Austrian auteur Michael Haneke dares viewers to stare into the void of modern existence. With his first three theatrical features, The Seventh Continent, Benny’s Video, and 71 Fragments of a Chronology of Chance—a trilogy depicting a coldly bureaucratic society in which genuine human relationships have been supplanted by a deep-seated collective malaise—Haneke established the rigorous visual style and unsettling themes that would recur throughout his work. Exploring the relationships among consumerism, violence, mass media, and contemporary alienation, these brilliant, relentlessly probing films open up profound questions about the world in which we live while refusing the false comfort of easy answers.

The day-to-day routines of a seemingly ordinary Austrian family (Birgit Doll, Dieter Berner, and Leni Tanzer) begin to take on a sinister complexion in Michael Haneke’s chilling portrait of bourgeois anomie giving way to shocking self-destruction. Inspired by a true story, the director’s first theatrical feature finds him fully in command of his style, observing with rigorous, clinical detachment the spiritual emptiness at the heart of consumer culture—and the horror that lurks beneath its placid surfaces. The Seventh Continent builds to an annihilating encounter with the televisual void that powerfully synthesizes Haneke’s ideas about the link between violence and our culture of manufactured emotion.

Michael Haneke turns the unflinching gaze of the camera back on itself in this provocative, profoundly disturbing study of emotional disconnection in the age of mass-media saturation. Benny (a frighteningly affectless Arno Frisch), the teenage son of wealthy, disengaged parents (Angela Winkler and Ulrich Mühe), finds release in the world of violent videos—an obsession that leads him to create his own monstrous work of real-life horror. Layering screens within screens and digital frames within the filmic frame, Benny’s Video is a coolly postmodern, metacinematic labyrinth in which the boundaries between actual and mediated violence become terrifyingly indistinguishable.

71 FRAGMENTS OF A CHRONOLOGY OF CHANCE

The simultaneously random and interconnected nature of modern existence comes into harrowing focus in the despairing final installment of Michael Haneke’s trilogy. Seventy-one intricate, puzzlelike scenes survey the routines of a handful of seemingly unrelated people—including an undocumented Romanian boy (Gabriel Cosmin Urdes) living on the streets of Vienna, a couple (Anne Bennent and Udo Samel) who are desperate to adopt a child, and a college student (Lukas Miko) on the edge—whose stories collide in a devastating encounter at a bank. The omnipresent drone of television news broadcasts in 71 Fragments of a Chronology of Chance underscores Haneke’s vision of a numb, dehumanizing world in which emotional estrangement can be punctured only by the shock of sudden violence.

The last three Blu-ray titles will all release on December 13, starting with the 1975 comedy-drama  Cooley High  from Director Michael Schultz. 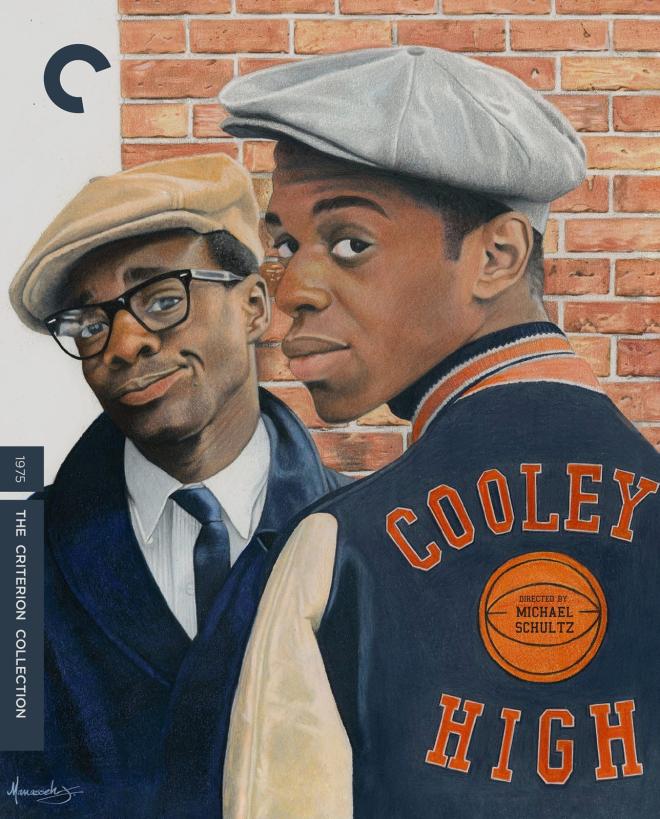 Chicago, 1964: it’s the last weeks of high school for aspiring poet Preach (Glynn Turman) and his best friend, Cochise (Lawrence Hilton-Jacobs), and they have a full slate of extracurricular activities: swinging dance parties, late-night joyrides, and the stumbling pursuit of romance. Of course, when you’re a young Black man in America, your coming-of-age story is far from complication-free. With Cooley High, director Michael Schultz and screenwriter Eric Monte—who drew on his own experiences growing up in Chicago’s Cabrini-Green housing project—arrived at something truly unique in 1970s cinema: an endearingly funny, tender, and authentic portrait of Black teens striving toward a brighter tomorrow, brought to life by a dynamic ensemble cast and set to a heavenly hit parade of Motown classics.

The documentary The Velvet Underground  from filmmaker Todd Haynes. 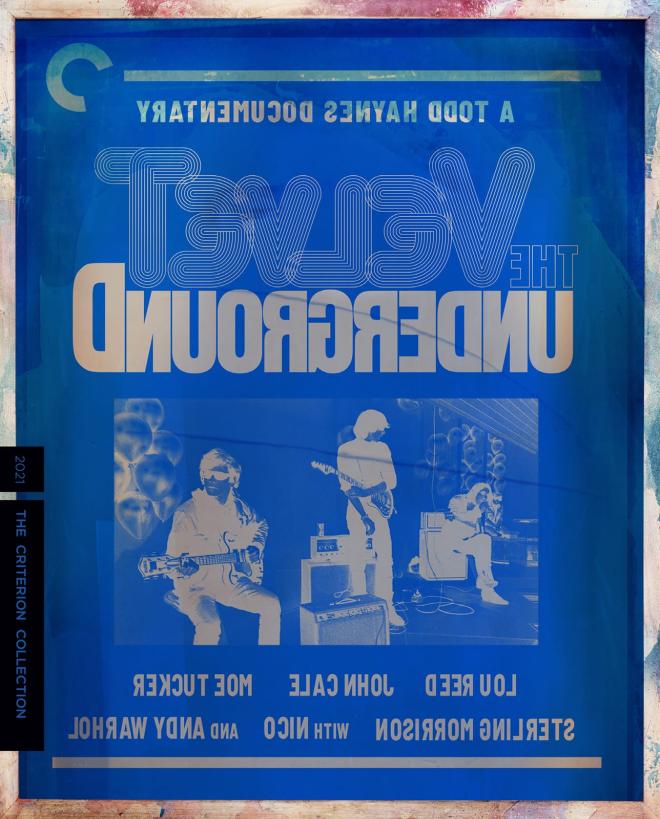 Emerging from the primordial soup of glamour, gutter sleaze, and feverish creativity that was New York’s 1960s underground culture, the Velvet Underground redefined music with its at once raw and exalted blend of experimentation and art-damaged rock and roll. In his kaleidoscopic documentary The Velvet Underground, Todd Haynes vividly evokes the band’s incandescent world: the creative origins of the twin visionaries Lou Reed and John Cale, Andy Warhol’s fabled Factory, and the explosive tension between pop and the avant-garde that propelled the group and ultimately consumed it. Never-before-seen performances, interviews, rare recordings, and mind-blowing transmissions from the era’s avant-garde cinema scene come together in an ecstatic swirl of sound and image that is to the traditional music documentary what the Velvets were to rock: utterly revolutionary.

And finally, a set of three films from director  Mai Zetterling  will be available on the same date. Included in this set is Loving Couples, Night Games, and The Girls. 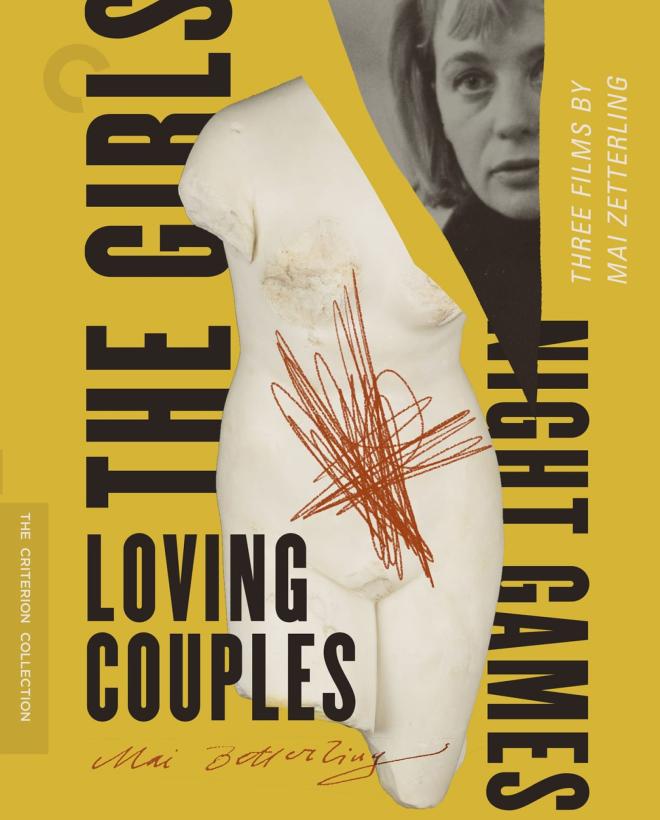 A fearlessly transgressive, long-overlooked pioneer of feminist cinema, Swedish actor turned director Mai Zetterling ruffled the feathers of the patriarchal establishment with a string of bracingly modern, sexually frank, and politically incendiary films focused on female agency and the turbulent state of twentieth-century Europe. Her peerless ability to render subjective psychological states with startling immediacy is on display in Loving Couples, Night Games, and The Girls—three provocative, taboo-shattering works from the 1960s featuring some of Swedish cinema’s most iconic stars. With their audacious narrative structures that fuse reality and fantasy, their elaborate use of metaphor and symbolism, and their willingness to delve into the most fraught realms of human experience, these movies are models of adventurous, passionately engaged filmmaking.

The title of Mai Zetterling’s boldly iconoclastic debut feature—adapted from a cycle of seven novels by the provocative feminist writer Agnes von Krusenstjerna—drips with irony. In 1915, three pregnant women from varying social backgrounds (Harriet Andersson, Gunnel Lindblom, and Gio Petré) enter a maternity ward. Cue a swirl of perspective-shifting flashbacks that, with searing psychological insight, illuminate the divergent yet interconnected experiences that brought them there—and that came to a head during one lavish, debauched Midsommar celebration. Wildly subversive in its treatment of sexuality, gender, class, religion, marriage, and motherhood, Loving Couples is as electrifying a first feature as any in cinema history, announcing the arrival of an uncompromising artist in pursuit of raw emotional truth.

Outrageous and explosively controversial (the Venice Film Festival refused to screen it publicly, while John Waters has called it his favorite film), Mai Zetterling’s second feature is a blazing psychosexual odyssey with heaving Freudian flourishes. On the eve of his marriage to his fiancée (Lena Brundin), Jan (Keve Hjelm) returns to his childhood home—a sprawling estate stuffed with antiques—where he relives his memories of his beautiful, decadent, mercurial mother (Ingrid Thulin) and finds himself forced to confront his unresolved Oedipal longings. Seamlessly interweaving past and present, carnivalesque camp and potent symbolism, Night Games functions as both a feverishly perverse family portrait and a serious statement on the tormented soul of a modern Europe reckoning with the demons of its past.

Mai Zetterling’s cinema reached new heights of exuberant experimentation and fierce political engagement with this pointed and playful touchstone of 1960s feminist cinema. As they tour Sweden in a theatrical production of Lysistrata, performing to often uncomprehending audiences, three women (national cinema icons Bibi Andersson, Harriet Andersson, and Gunnel Lindblom) find their own lives and marriages mirrored in the complex, combative gender relations at the heart of Aristophanes’s play. Onstage drama, offstage reality, and a torrent of surrealist fantasies and daydreams collide in The Girls, a slashing, sardonic reflection on the myriad challenges confronting women on their path to liberation, and on the struggles of the female artist fighting to make her voice heard over the patriarchal din.

As usual, we'll continue to post updates as soon as they become available.