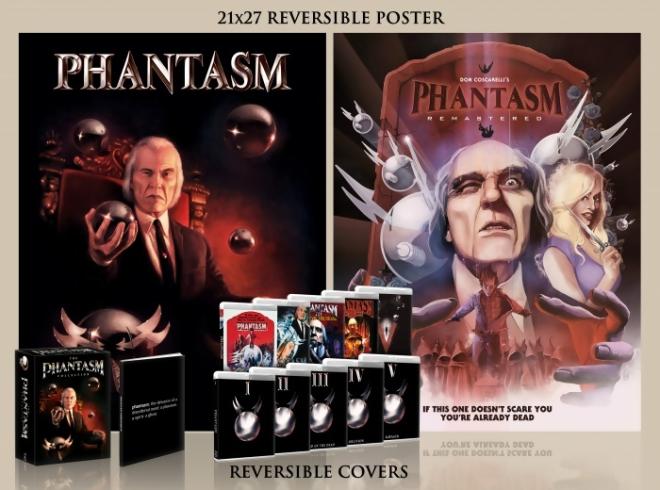 The boxed set of all five 'Phantasm' films available on Blu-ray next month has now been fully detailed.

As previously reported, Well Go USA is preparing 'The Phantam Collection' for Blu-ray, and now the official street date is April 11.

One of the world’s most popular franchises in the history of horror, the Phantasm film series has terrified fans for generations. The collection features all five frightening films in the series – PHANTASM: REMASTERED (1979), PHANTASM II (1988), PHANTASM III: LORD OF THE DEAD (1994), PHANTASM IV: OBLIVION (1998) and the most recent installment PHANTASM: RAVAGER (2016). In all five films in Don Coscarelli’s iconic series, Mike (Michael Baldwin) faces off against a mysterious grave robber known only as the Tall Man (Angus Scrimm) and his lethal arsenal of terrible weapons.

"Well Go USA has done an outstanding job in curating the ultimate Phantasm collection. This terrific new release rivals the best Blu-ray box sets ever in its size and depth," said Don Coscarelli. "I am so excited to share these never-before-seen features with our devoted fans, who will now be able to witness just how the Phantasm films were created in this stunning high-definition presentation."

"This box set is the answer to every Phantasm fan's prayers," said Doris Pfardrescher, President & CEO, Well Go USA Entertainment. "The filmmakers have gone above and beyond in order to create the most immersive Phantasm experience possible in one comprehensive box set."

'Phantasm' - At a funeral, Mike (Michael Baldwin), watches as a tall mortician clad in black (Angus Scrimm) tosses the unburied coffin into a waiting hearse as if it were nothing. Seeking the truth behind this unusual sight, Mike breaks into the mortuary, where he comes face-to-face with the sinister Tall Man. After barely managing to escape with his life, Mike enlists the help of his brother, Jody (Bill Thornbury), and their friend Reggie (Reggie Bannister). Together they set out to uncover the secrets of the Tall Man and those who dwell in his hellish world. PHANTASM: REMASTERED has a runtime of approximately 98 minutes and is rated R for nudity, violence and intense scenes.

'Phantasm II' - Released after seven years in a mental hospital, Mike convinces his old pal Reggie to join forces with him to hunt down and destroy the Tall Man once and for all. Mike’s visions lead the two to a quiet little town where a horde of flying killer balls aim to slice and dice their gruesome way through everyone. Exploding with special effects, unparalleled thrills, horror and suspense, PHANTASM II climaxes with a blood-curdling conclusion that you have to see to believe. PHANTASM II has a runtime of approximately 97 minutes and is rated R.

'Phantasm III: Lord of the Dead' - The mutant dwarf creatures are attacking, the silver spheres are flying, and the Tall Man is back with a vengeance! Fifteen years after the original horror classic, writer/producer/director Don Coscarelli reunites brothers Mike (A. Michael Baldwin) and Jody (Bill Thornbury) to help their friend Reggie (Reggie Bannister) destroy the Tall Man (Angus Scrimm) once and for all. PHANTASM III: LORD OF THE DEAD has a runtime of approximately 91 minutes and is rated R for violence and gore, and for language and sexuality.

'Phantasm IV: Oblivion' - 13 years after the original nightmare began, Mike must cross dark dimensions of time and space to discover his origins and those of his nemesis, the evil Tall Man. With only his loyal friend Reggie at hisside, and the spirit of his dead brother to guide him, Mike must finally confront this malevolent embodiment of death. Prepare to be scared witless as the fine line between the living and the dead snaps with a vengeance! PHANTASM IV: OBLIVION has a runtime of approximately 90 minutes and is rated R for horror violence/gore and some strong language.

'Phantasm V: Ravager' - After battling with the Tall Man in Phantasm: Oblivion, a battered Reggie wanders through the desert in search of his missing friend, Mike. After recovering his 1971 Hemi ‘Cuda, Reggie is targeted by two of the Tall Man’s Sentinel Spheres and destroys them. He awakens suddenly to find himself sitting in a wheelchair pushed by none other than the elusive Mike! Although overjoyed by their reunion, Reggie is in this alternate dimension an aged and weary old patient in a psychiatric ward. And only he remembers their battled and bloodied past with the Tall Man. Reggie must travel between dimensions and discern what is reality in order to confront the mysteries at the heart of a decades-long struggle against evil. He is met with new and familiar faces along the way, and an epic showdown on the Tall Man’s home world awaits! PHANTASM V: RAVAGER has a runtime of approximately 86 minutes and is not rated.

The 6-disc set will include loads of special features including audio commentaries, interviews, deleted scenes, behind the scenes featurettes, trailers, TV spots, radio spots, and “Phantasmagoria” a documentary containing new and archival interviews with cast and crew.

You can find the latest specs for 'The Phantasm Collection' linked from our Blu-ray Release Schedule, where it's indexed under April 11.