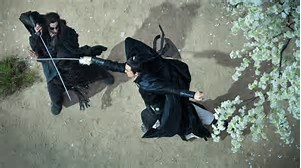 The action-packed wuxia tale is planned for Blu-ray in April.

In an early announcement to retailers, Well Go USA says 'Sword Master' will arrive on Blu-ray on April 11.

In this beautifully shot wuxia epic, a powerful swordsman is haunted by the destructive impact his deadly talents have on others. Weary of the bloodshed and violence from the martial arts world, he banishes himself to the humble life a vagrant, wandering the fringes of society. But his violent past refuses to let him go quietly. The master swordsman must regain the ability to wield his sword and fight those disrupting the peace he so desperately craves.

Director Derek Yee joins forces with producer Tsui Hark to bring this classic story of a master swordsman to life. With a mixture of complex emotions and unconventional characters, Tsui and Yee believe their collaboration has created a Sword Master that will both entertain and intrigue.

Specs have yet to be revealed, but supplements include: Mastering the Sword.

You can find the latest specs for 'Sword Master' linked from our Blu-ray Release Schedule, where it is indexed under April 11.