All versions of the disc will include HDR10 only.

UPDATE 1/11/2018: Sony has confirmed with us that the UK disc of Blade Runner 2049  WILL NOT feature Dolby Vision support. The DV logo on the currently posted box art is just an error. Both the US Warner Bros. disc and the UK Sony disc will only include HDR10.

Previous Report: Warner Bros. is set to release Blade Runner 2049 on 4K Ultra HD Blu-ray in the US on January 16. With that said, Sony is handling the distribution for the film in the UK, and it now looks like the two discs might differ when it comes to HDR support.

According to [incorrect box art] logos featured on the box art posted on the Amazon UK listing of the film, Sony's release will include Dolby Vision HDR (along with HDR10 for those without DV gear). Meanwhile, the currently posted box art for the Warner Bros. US release does not include the Dolby Vision logo. Likewise, the US press release for the 4K Blu-ray from Warner Bros. makes no mention of Dolby Vision either, implying that it will offer HDR10 only. Check out close-up shots of the logos on the back cover art below for reference:

Now, box art posted on retailers isn't always 100% accurate, so this isn't a totally surefire confirmation.  [For example, in this case, there is a Dolby Vision logo on the Sony UK box art when what isn't a feature.] And it should also be noted that Warner Bros. did end up including Dolby Vision on its US release of Westworld despite the logo not appearing on the box art. But, from what we have to go on now, it's looking like Dolby Vision will be included on the UK Ultra HD disc from Sony and not the US Ultra HD disc from Warner Bros.

Thankfully, the Ultra HD Blu-ray format is region-free, so fans who want Dolby Vision can import the Sony disc from Europe. With that said, they are going to have to wait just a bit longer as Amazon UK currently lists a February 5 release date. 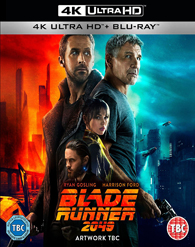 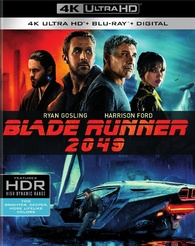 Order the US 4K Blu-ray

You can find the latest specs for the US release of Blade Runner 2049 linked from our Blu-ray and 4K Release Schedules, where it is indexed under January 16.