UPDATE 4/2/2018: Amazon has removed its previously available pre-order for May 8 and Warner Bros. has now confirmed a fall 2018 release for the Ultra HD Blu-ray. The 4K HDR home video release is being produced in collaboration with Christopher Nolan (The Dark Knight, Dunkirk).

Likewise, Nolan is also involved in prepping a new "unrestored" 70mm print of the film for the 71st annual Cannes Film Festival on May 12. Per Warner, "The 70mm print was struck from new printing elements made from the original camera negative. This is a true photochemical film recreation. There are no digital tricks, remastered effects, or revisionist edits."

Following the festival screening, 2001: A Space Odyssey will then return to select US theatres in 70mm beginning May 18, 2018.

According to a report from The Digital Bits, Warner Bros. is prepping 2001: A Space Odyssey for 4K Ultra HD Blu-ray.

2001: A Space Odyssey spans from the dawn of man to its title year. Stone Age Earth: In the presence of a mysterious black obelisk, pre-humans discover the use of tools -- and weapons -- violently taking first steps toward intelligence. 1999: On Earth's moon astronauts uncover another mysterious black obelisk. 2001: Between Earth and Jupiter, the spacecraft's intelligent computer makes a mistake that kills most of the human crew -- then continues to kill to hide its error. Beyond Time: The sole survivor of the journey to Jupiter ascends to the next level of humanity. 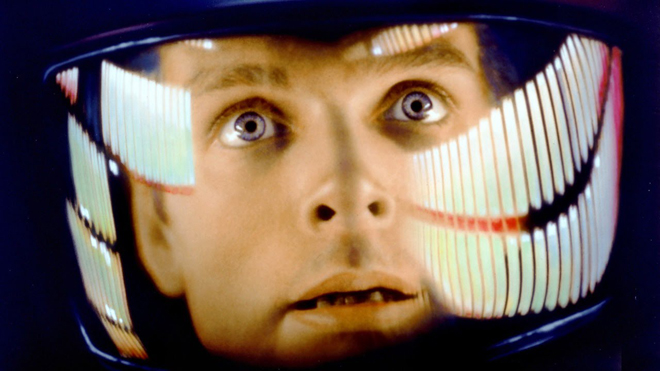 Technical specs and supplements have not been revealed yet.

2001: A Space Odyssey was first released in 1968 and comes from writer/director Stanley Kubrick and co-writer Arthur C. Clarke. The movie stars Keir Dullea, Gary Lockwood, William Sylvester, and Douglas Rain as the voice of the infamous HAL 9000 computer. A standard Blu-ray version of the film is currently available as a stand-alone disc or as part of the Stanley Kubrick Masterpiece Collection.