The comedy sequel is now available for pre-order.

In an early announcement to retailers, Warner Bros. is preparing 'Horrible Bosses 2' for Blu-ray in 2015.

Suggested list price for the Blu-ray/DVD/Digital HD combo pack is $35.99.

You can find the latest specs for 'Horrible Bosses 2' linked from our Blu-ray Release Schedule, where it's indexed under PENDING. 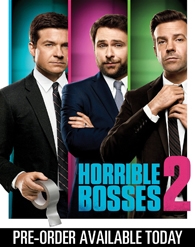 Discs mentioned in this article: (Click for specs and reviews)
Horrible Bosses 2 (Blu-ray)