Pre-orders for the sci-fi sequel are now live!

In an early announcement to retailers, Warner Bros. is prepping Blade Runner 2049 for 4K Ultra HD Blu-ray and Blu-ray. An exact release date has not been announced yet, but both releases are now available for pre-order.

Thirty years after the events of the first film, a new blade runner, LAPD Officer K (Ryan Gosling), unearths a long-buried secret that has the potential to plunge what’s left of society into chaos. K’s discovery leads him on a quest to find Rick Deckard (Harrison Ford), a former LAPD blade runner who has been missing for 30 years.

You can find the latest specs for Blade Runner 2049 linked from our Blu-ray and 4K Release Schedules, where it is indexed under PENDING. 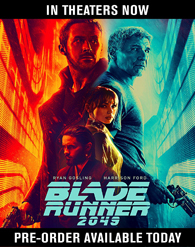