VIZIO has announced the release of the VIZIO SmartCast skill for Amazon Alexa devices. The hands-free voice control feature is now compatible with 2016 and 2017 P-Series, M-Series, and E-Series 4K displays paired with an Alexa-enabled device.

"VIZIO SmartCast is an industry leader with voice control and mobile device integration, in addition to a traditional remote and SmartCast TV interface," said Bill Baxter, Chief Technology Officer, VIZIO. "With the introduction of the VIZIO SmartCast skill for Alexa, we're excited to expand voice controls, giving users with Alexa-enabled products a convenient way to control key features on their VIZIO SmartCast TVs and displays." 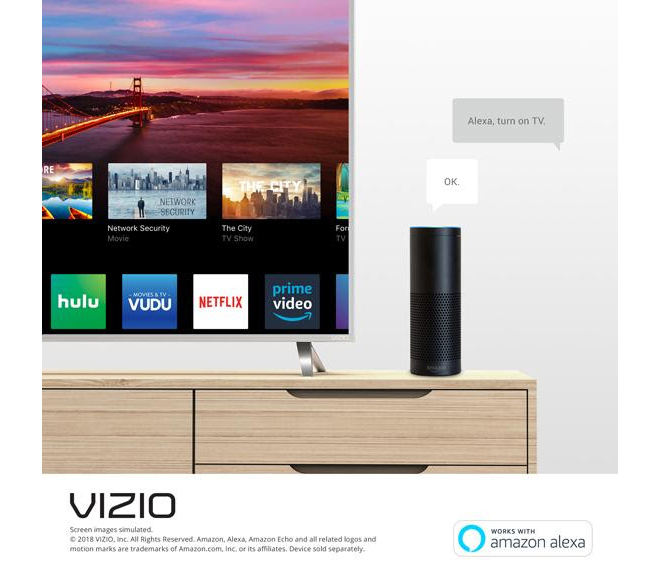 The VIZIO SmartCast skill enables users to control select functions on compatible VIZIO displays through hands-free voice commands via an Amazon Echo, Echo Dot, Amazon Tap, Echo Show or other Alexa-enabled device. Supported voice controls include volume adjustment, channel and input switching, and turning the display on and off, along with playback functions like pause, fast forward, and rewind for select apps.

And beyond the new voice control feature, the SmartCast platform also allows users to control their display via the SmartCast app for iOS and Android mobile devices, along with the ability to cast various apps to the big screen. Likewise, customers can also use a traditional remote to control settings and playback, and access a select lineup of apps through an integrated on-screen interface.

In addition to support for 2016 and 2017 P-Series, M-Series, and E-Series displays, the SmartCast skill for Alexa is also set to be compatible with 2018 VIZIO SmartCast Full HD and HD displays in the coming weeks as well.