VIZIO has announced the release of its 2016 soundbar lineup. The soundbars range from 2.1 to 5.1 systems and each model includes fully integrated Google Cast and Bluetooth support.

"The new VIZIO SmartCast sound bar line-up was designed not only to accompany big screens to create an immersive home theater experience, but also serve as a great home audio source," said Matt McRae, Chief Technology Officer, VIZIO. "The VIZIO SmartCast app allows consumers to seamlessly Cast and control their music right from their mobile device across a variety of configurations. Coupled with the collection’s sleek industrial design, the VIZIO SmartCast audio solutions are a must-have addition to any home."

Leading the collection, is the flagship SmartCast 45" 5.1 Slim Sound Bar System (SB4551-D5). The soundbar is designed to be paired with displays 47" and larger, and features custom drivers, a center channel, separate rear satellite speakers, a compact subwoofer, and a sleek profile measuring 2" deep and 2" high. The system is rated for 104dB Sound Pressure Level (SPL) 1 and 30 Hz of bass. All of the new models also integrate Google Cast support, allowing users to stream songs from popular music apps. In addition, customers can simply tap the Cast button to stream music directly over Wi-Fi to any VIZIO SmartCast device on their home Wi-Fi network. Likewise, consumers can turn any Android or iOS mobile screen into a touchscreen remote for their SmartCast soundbar through the VIZIO SmartCast app. 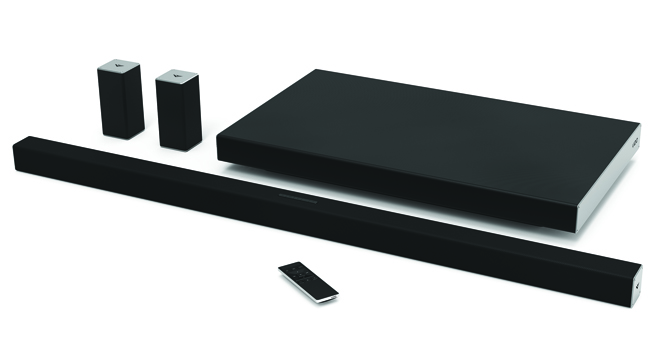