VIZIO has announced the addition of Apple AirPlay 2 and HomeKit support to its lineup of SmartCast TVs. The update is rolling out now to new and existing models dating as far back as 2016.

"SmartCast 3.0 is full of added value for VIZIO customers. With both AirPlay 2 and HomeKit support, users can now share movies, TV shows, music and more from their favorite apps, including the Apple TV app, directly to SmartCast TVs, and enable TV controls through the Home app and Siri," said Bill Baxter, Chief Technology Officer, VIZIO. "We are thrilled to offer an even more compelling value proposition to our users with a smart TV experience that supports all three major voice assistants. This broad range of compatibility enables VIZIO SmartCast to seamlessly integrate into any household with Siri, Google Assistant or Alexa – giving users more ways to sit back and enjoy the entertainment they love." 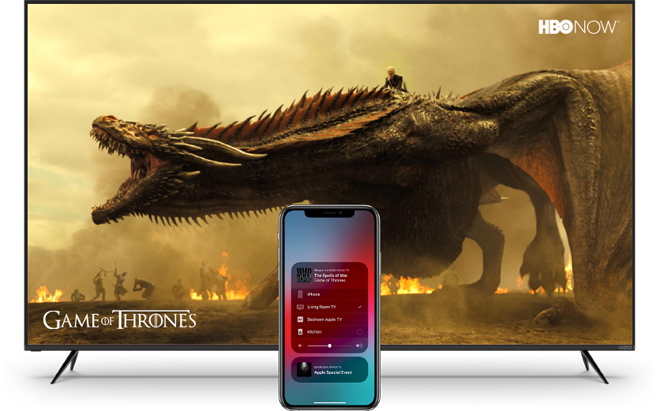 With AirPlay 2 support, users can stream music, photos, and videos from compatible apps on Apple iPhone, iPad and Mac devices to their SmartCast display, including support for 4K and Dolby Vision HDR titles. Likewise, the feature also enables customers to mirror content like web pages and presentations to a SmartCast TV. In addition, AirPlay 2 can be used for multi-room audio capabilities as well, with sound synced simultaneously across a user's TV, Apple HomePod, or other AirPlay 2-compatible speakers. Meanwhile, HomeKit support allows users to control their SmartCast TV via the Home app or by Siri voice commands through a separate Apple device.

Here's a full rundown of VIZIO SmartCast models set to receive the AirPlay 2 and HomeKit update over the coming months: