Several 4K VUDU titles are now available on the Roku 4.

VUDU has announced the launch of its first wave of twelve 4K Ultra HD titles. The new lineup will initially be available exclusively on the recently released Roku 4. 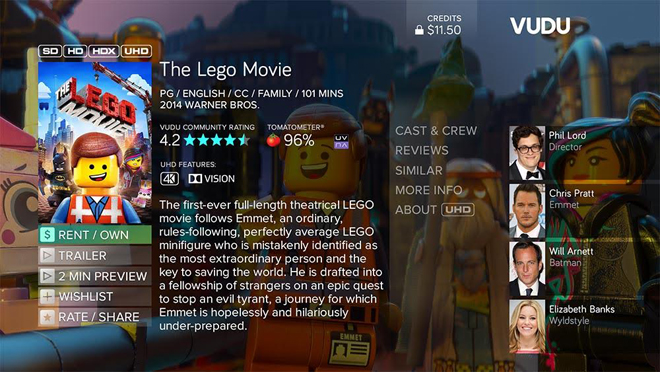 The films can be accessed from the VUDU channel on the Roku 4, and users can choose to rent or own each title in 4K by clicking on the UHD option under the movie details page. In addition to the improved resolution, select VUDU UHD titles also include Dolby Atmos soundtracks. Finally, though not currently supported by the Roku 4, several VUDU UHD titles will also offer Dolby Vision HDR through Dolby Vision devices like the upcoming VIZIO Reference Series.

VUDU's initial UHD lineup is now available on the Roku 4. VUDU plans to expand its UHD collection to more 4K-enabled devices in the coming months. The Roku 4 is now shipping for $130.