In an early announcement to retailers, Universal says 'Battleship' will be available on Blu-ray on January 17.

Against all odds, a daring young naval officer and his heroic crew launch an all-out military showdown against a superior alien force in this enthralling, thrill-ride that will have viewers holding their breath through the final gripping face-off.

The release will feature a DTS:X soundtrack and supplements include: Alternate Ending Previsualization; All Access with Director Peter Berg; USS Missouri VIP Tour; Preparing for Battle; All Hands on Deck: The Cast; Engage in Battle; Commander Pete; and The Visual Effects of Battleship. 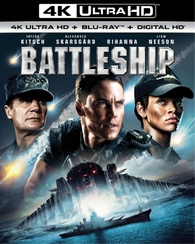