Universal says The House With a Clock in its Walls will be available on 4K Ultra HD Blu-ray and Blu-ray on December 18.

In The House With a Clock in its Walls directed by Eli Roth (The Green Inferno, Cabin Fever), Lewis Barnavelt (Vaccaro) goes to live with his Uncle Jonathan (Black) in a creaky and creepy mansion with an eerie tick-tocking heart. But when Lewis soon finds out he’s in the presence of magic practiced by his uncle and neighbor Mrs. Zimmerman (Blanchett), his new town’s dreary aura boosts to life in an exciting and dangerous way. Based on the beloved children’s classic book written by John Bellairs and illustrated by Edward Gorey, The House With a Clock in its Walls is written by Eric Kripke (creator of TV’s “Supernatural”) and co-stars Kyle MacLachlan (“Twin Peaks,” Inside Out), Colleen Camp (Clue), Renée Elise Goldsberry (“One Life to Live”), and Sunny Suljic (Mid90s, The Killing of a Sacred Deer). It is produced by Mythology Entertainment’s Brad Fischer (Shutter Island) and James Vanderbilt (Zodiac), as well as Kripke.

You can find the latest specs for The House With a Clock in its Walls linked from our 4K and Blu-ray Release Schedules, where it is indexed under December 18. 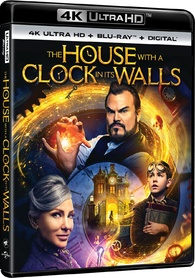 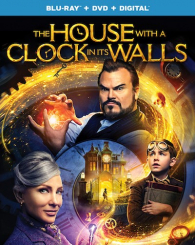