UltraViolet Digital Copy Service Set to Shut Down in July

The digital locker platform is closing.

UltraViolet has announced plans to terminate its service on July 31, 2019. The platform was designed to redeem and link digital copies to various online retailers. The decision to end UltraViolet likely comes as a result of increased support for Movies Anywhere, a rival digital locker system developed by Disney.

After July 31, all UltraViolet libraries will be closed. With that said, the majority of movies and TV shows added to a user's library before the termination date will remain watchable via previously-linked digital retailers like VUDU, Fandango NOW, Kaleidescape, Paramount Movies, and Verizon Fios. Users can still manage and add linked retailers to their accounts now at myuv.com. In addition, customers will still be able to redeem digital codes following the service's termination, but those titles may only be accessible through the retailer they are redeemed at.

In order to help ensure that users do not lose access to their content after UltraViolet closes, customers should keep their UltraViolet accounts open and linked through the termination date. CLICK HERE for more detailed information about the closure and how it might affect your collection of digital titles. Likewise, below is statement from VUDU regarding the matter and how the transition will specifically impact its users: 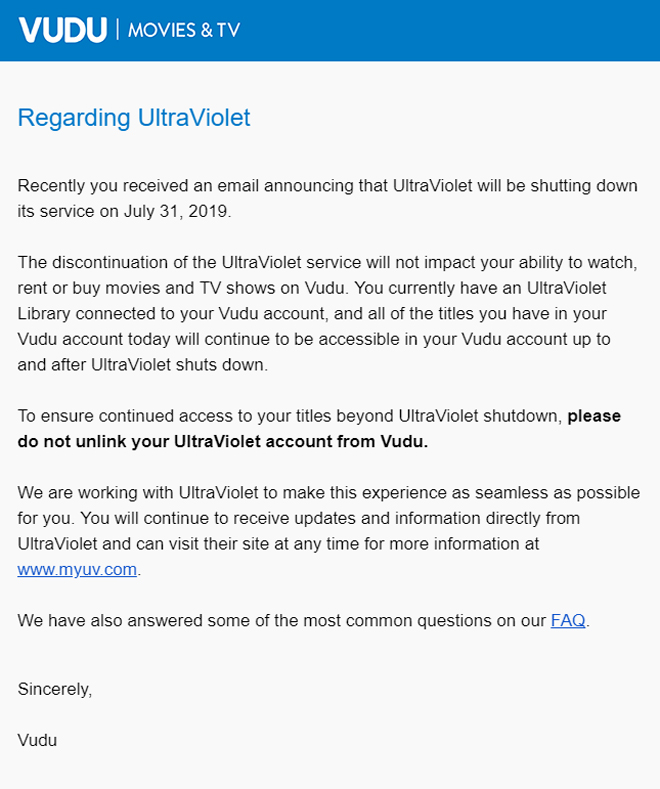 Unlike UltraViolet, however, Movies Anywhere does not currently support TV shows or content from Paramount and Lionsgate.