A restored Blu-ray is coming to the US and a crowd-funded 4K disc is planned for the UK.

Synapse Films is prepping a Limited Collector's SteelBook Blu-ray of Dario Argento's Suspiria for the US with a tentative ship date of mid-late November. Meanwhile, British label CultFilms is set to launch a crowd-funding campaign for a Limited Edition SteelBook Ultra HD Blu-ray on October 30.

The US Synapse Films Blu-ray disc will use a new 4K restoration of the original uncut, uncensored Italian 35mm camera negative exclusively done by Synapse Films, with color correction supervised and approved by Director of Photography, Luciano Tovoli. In addition, the release will be limited to 6,000 units and will feature exclusive SteelBook packaging and collector's o-card sleeve with artwork from Malleus, Van Orton Design, Juan José Saldarriaga & Chris MacGibbon. A 4K Ultra HD Blu-ray version has not been announced at this time.

Here's a full rundown of specs and preliminary supplements:

To pre-order the Suspiria Blu-ray from Synapse Films, click here. 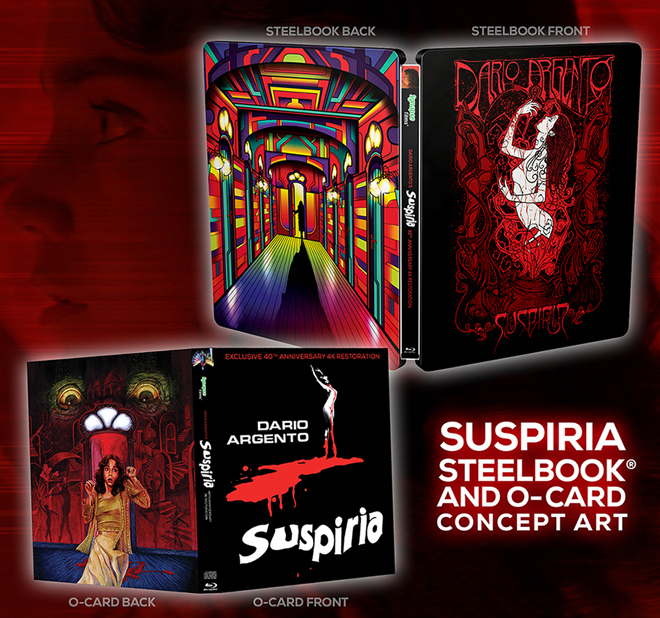 Meanwhile, CultFilms has announced plans to release its own Suspiria Blu-ray in the UK on November 14. Supplements will include:

In addition, the British label will launch a crowd-funding campaign on October 30 to produce a Limited Edition 4K Ultra HD Blu-ray/Blu-ray dual-format SteelBook for the UK.

The CultFilms disc will apparently feature a different 4K restoration conducted by TLE Films in Germany with the movie's crucially distinct color palette reinstated in accordance with Argento's original Technicolor Dye Transfer specification, using period film materials as reference. Likewise, the restorers also reinserted all missing frames which had degraded badly or were simply lost over the years. Specially-commissioned extras exclusive to this 4K SteelBook release and available nowhere else in the world will also be included.

You can find the latest specs for Suspiria linked from our Blu-ray Release Schedule, where it is indexed under PENDING.